As much a part of the French ‘look’ as a striped sailor’s shirt or foulard (scarf), the baguette is something of a fashion accessory in Paris, tucked under an arm, poking out of a shopping bag, or sharing a bicycle basket with a posie of flowers and the weekend newspaper.

That the French love their baguettes is unquestionable. They line up patiently outside the best bakeries to buy them, they often purchase two bread sticks so they can munch into one on the way home, and they’ll happily eat little more than a baguette with butter and jam for breakfast.

But we didn’t appreciate just how seriously the French take their baguettes until this trip to Paris, when we learned that not only did our neighbourhood of Montmartre boast a dozen or more boulangeries (bakeries), including four brilliant ones on our street, but that we also had some award-winners. 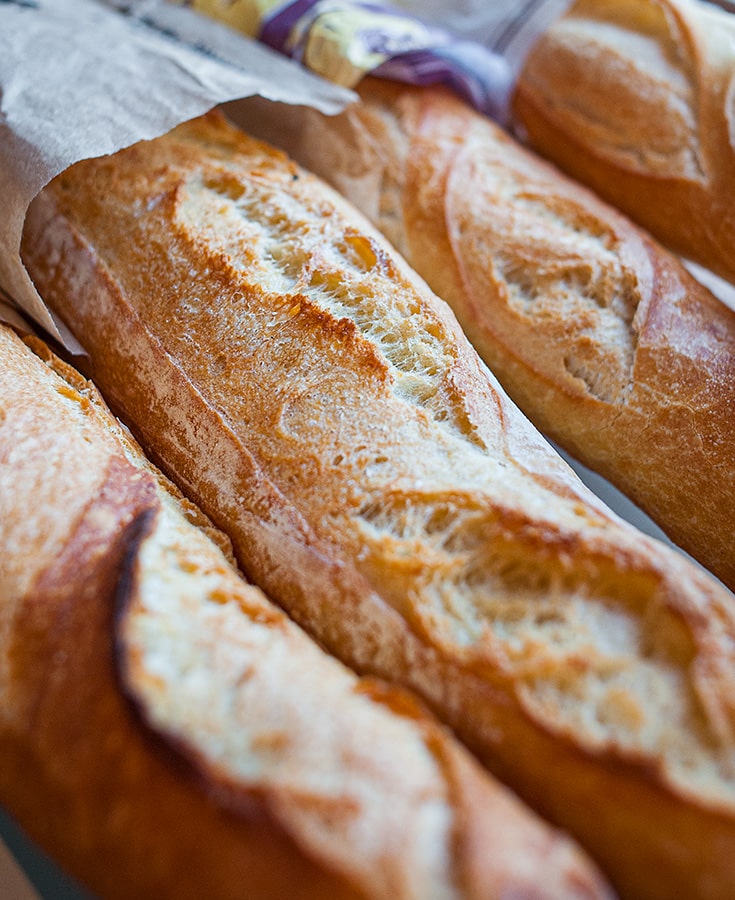 That’s right, in France, they have baguette competitions and give prizes to the best baguette! The winner gets the privilege of providing baguettes to the President as well as the kudos that results in the inevitable long lines outside the bakery.

To show how seriously Paris – and France – take their baguettes, they instituted a law on how ‘baguettes de tradition’ must be made. Firstly, the bread must contain only wheat flour, yeast, water and salt – and no preservatives, which is why baguettes go stale so quickly.

Secondly, the bread must be made fully on the premises, with no freezing involved in the process – many bread shops buy in frozen bread and just heat it.

But what makes this mix of wheat flour, yeast, water and salt so special – or what makes some more special than others? Paris-based foodie and blogger, Meg Zimbeck, who said she tasted 27 types of baguettes for her story on The Best Baguette in Paris for Budget Travel believes “The outside should be golden and crunchy, and almost taste grilled or nutty, while the inside should be soft and textured.” 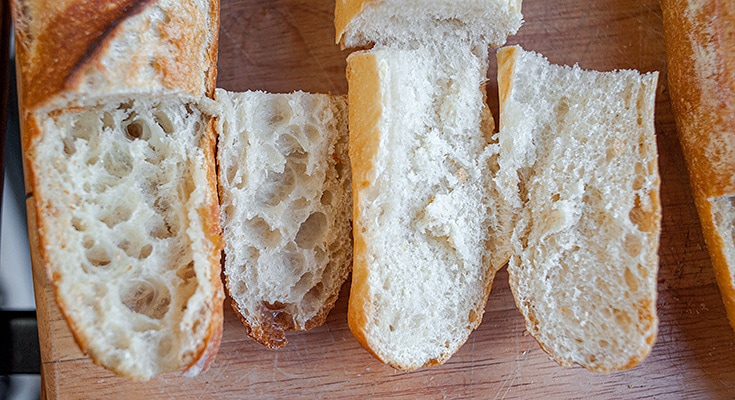 On a Context food-tasting walk we did with her, Meg gave participants a lesson on how to identify a good baguette. Slicing the ends off two baguettes, one a manufactured supermarket product and the other from an artisanal bakery (and a former award-winner), she compared the two bread sticks.

“A good baguette has holes and is textured inside,” Meg said, pointing out the smooth uniform consistency of the ‘bad’ baguette. “It’s the natural fermentation process that creates these holes and gives the baguette a more complex flavour,” she revealed showing us the sponge-like texture of the ‘good’ baguette.

We decided to test out Meg’s theory and do our own baguette tasting of bread sticks bought from bakeries in our street, including the winner of this year’s competition. Here are our conclusions.

6 Rue des Abbesses
Lara:This one is paler looking and is longer than the others. It’s also wonky – is the shape important? It’s moderately crunchy though it tastes a bit like cardboard. I really don’t like that one at all. In fact, I don’t even want to finish it…
Terence: Agree. That’s supermarket quality, as far as I’m concerned. It doesn’t have any real taste. It’s a bit blah. If you had this at a restaurant, you wouldn’t be eating this on its own, you’d only really use it to mop up a sauce. The structure is also very uniform. It doesn’t appear to be artisanal at all.
Lara:Yep, we’re feeding that one to the birds.

40 Rue Lepic (a continuation of Rue des Abbesses)
Lara:This one is too ‘white-bread-sandwich’ for me. It’s better than the last one, but again, only slightly better than a supermarket baguette.
Terence: Although the structure led me to believe it would have a lighter and more complex mouth-feel, it is actually heavier and the crust is really not that interesting. It has more crunch than the last one yet it’s more spindly – it has actually broken in two.
Lara:That’s because I dropped that one on the road on the way home…
Terence: Oh…

24 Rue des Abbesses
Lara: This one is very rustic looking, only slightly out of shape, and sprinkled with flour, unlike the others. It’s crunchy when you bite into it, and it has a nice texture. Actually, I like this texture a lot, it has a lot more flavour; it’s very doughy. I could happily eat more of this one.
Terence: The crust is slightly thicker, and it’s got a nice light crunch to it, but the bottom is a bit soft. It tastes more of yeast – it’s a good bread. If I got this at a restaurant I’d know they cared about the kind of bread they served. It really has a lot more flavour than the others so far.

38 Rue des Abbesses
Lara: This one is darkest in colour. It’s also very crunchy at first bite but the inside is a little too light for me and while it’s the most airy in terms of appearance, it’s not as airy to taste. I like the flavour of this one a lot.
Terence: I really like this one a lot. This has the best texture for me. Look at it (pointing to exterior) it’s as if the yeast is just dying to break out of there. It’s almost alive! This is one I’d happily eat walking along the street, while not wearing a beret or a striped shirt!

Lara: Coquelicot is by far the best for me. I could eat more of that now, but I’m very happy to go feed the others to the pigeons.
Terence: Not the one from Le Grenier à Pain, you’re not. I’m going to agree with the judges and say this is my favourite, but I’d happily eat the Coquelicot bread too.

If you liked this, you might also like Paris: Baguette Protocol, an amusing interview with Meg about baguettes on Budget Travel, and our tongue-in-cheek tastings of Sherry in Jerez and 99 cent wine in Barcelona. Do you have anything you’d like us to taste for you? Let us know in the comments below.