Arty Montmartre may have been depicted in countless paintings by artists like Toulouse-Lautrec and Utrillo, and starred in movies such as Moulin-Rouge and Amélie, but still it must be one of the most misunderstood and misrepresented of Paris neighbourhoods.

Too easily dismissed as touristy by those who haven’t taken the time to get to know it, and yet much more ‘local’ than many of the city’s quarters, Montmartre is a neighbourhood that has eluded us, despite having stayed here at a Parisian friend’s apartment on previous visits and pounded the pavements of the hilly ‘hood when Terence wrote a Paris guidebook years ago.

So we decided to discover the area that’s been our home for almost two weeks through the eyes of local resident and artist Marie Theres Berger on a walking tour with Context. 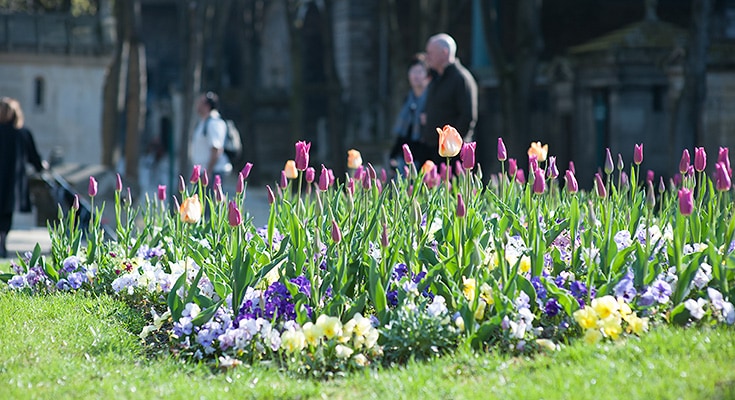 Our amble began on the corner of our street, outside the pretty carousel near Metro Abbesses, where Marie Theres described how Montmartre had grown from being a small village outside Paris that was home to poor workers who commuted into the centre, to the residence of artists and bohemians in the early 1900s who were attracted by the picturesque scenery as much as the low rents.

Painters such as Picasso, Braque, Renoir and Modigliani would kick back at the open-air dance halls like Moulin de la Galette that grew out of the gardens of the mills that once dotted the hilltop. It was Toulouse-Lautrec who opened the most famous cabaret of them all, the Moulin Rouge, because he had wanted to paint professional dancers (who doubled as prostitutes) because they looked more attractive that ordinary women.

As a result, Montmartre developed into both a red-light district, centred mainly in the quarter at the bottom of the hill that became known as Pigalle, and a hotbed for creativity. Many artists, including Picasso and Modigliani, lived and painted in the art commune, Le Bateau-Lavoir, and today the City of Paris still supports artists by providing low-cost studios here and all over Montmartre, which Marie Theres pointed out to us on our stroll.

Our walk took us by the increasingly gentrified main street of Abbesses, home to myriad restaurants, cafés, bars, and boutiques, down Rue Lepic (made famous by the café that appeared in the film Amelie), lined with flower shops, fromagerie and boulangerie, and by the Moulin Rouge on Boulevard de Clichy, to the Montmartre Cemetery, where notable Parisians are buried from Zola and Stendhal to Degas and Truffaut.

From here we crossed the historic iron bridge that cuts across the cemetery “disturbing the poor souls who mistakenly thought they were being laid to rest”, Marie Terese reminds us, up Rue Durantin, once a rundown street that’s now a very fashionable address. Along the way we peer into courtyards and stop to admire a grand 18th century folie, a weekend home of aristrocats’ escaping Paris, where Renoir once lived. Slowing we climbed higher, Marie Terese pointing out the enormous glass windows of artist studios, the last remaining wooden mill, and small old houses that have been dwarfed by apartment blocks. 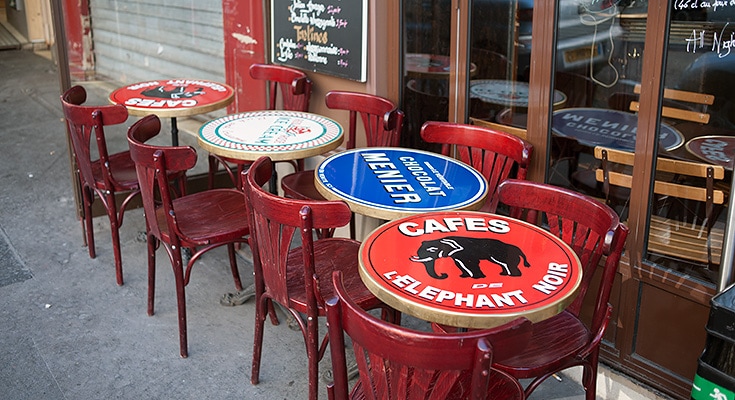 In a quiet public garden of locals walking dogs, Marie Terese shows us the statue of the martyred Saint Denis who apparently walked, carrying his own decapitated head (!), along a path to what would become the Cathedral of St Denis. It’s from Saint Denis, and other martyrs executed by the Romans, where Montmartre (hill of the martyr) gets its name. We also discover other rather different tributes, such as the bust of Dalida, a beautiful Egyptian-Italian who became one of France’s most famous singers.

From another public park where a family kicks a ball and locals read books while they take in the sunshine, we get a stunning view of the neo-Byzantine Basilica of Sacré-Cœur that’s much more striking than the postcard picture from the front simply because of its close proximity – it’s as if the park is the cathedral’s back yard.

As we mosey around to the front of the church, and then along the cobblestone streets of Place du Tertre and Rue Norvins, we well and truly leave the tranquil leafy streets of Montmartre that we’ve wandered for the last couple of hours and re-enter the Montmartre that most people know where: weary tourists watch buskers from the tops of the stairs, a crush of people crowd the streets, tourists shopping for souvenirs and ‘artists’ painting their portraits and cutting out their silhouettes for a price.

Just as quickly as we arrive, we leave the Montmartre of tourist brochures again, and at the bottom of the stairs in front of the cathedral, we walk up Rue Yvonne le Tac, past the chic boutiques and cafés crammed with locals, to Rue des Martyrs, and back ‘home’ to Rue des Abbesses, to our Montmartre.