Spending two weeks in one of the world’s great gastronomic capitals and not doing a Paris cooking class would have been like going to Siem Reap and not clambering around Angkor Wat. Doing a French cooking course was a given, what kind was the question.

Visitors to Paris are going gaga over macarons right now. Americans in particular, and even the odd Parisian, are oohing, ahhing, and salivating over these sugary confections in the windows of Ladurée and every other good pâtisserie in the city.

So it made sense to find out what all the fuss was about by enrolling in a private pastry making course at the Cook’n With Class cooking school in our neighbourhood of Montmartre, organised through Viator. My goal? To learn how to master the art of making the macaron. And a few other bits and pieces.

Mastering the Macaron in a Paris Cooking Class

10:00am “You actually let people do this?” I ask Pastry Chef Pino, pointing to a laser digital thermometer pointed at a saucepan bubbling with scorching hot caramelized sugar – something not to be trifled with in a kitchen. “Well, not all the time,” Pino says, as I pour a little more sugar into the sauce that will eventually become the filling for the most blogged-about sweet treat in the world after the cupcake – the macaron.

My Paris cooking class is a combination of a pastry-making course, which normally includes ice-cream, biscuits, fresh pastry, and tarte tatin, and a macaron-making course. Though my mission today is mastering the macaron. The class is held at an intimate cooking school ran by Frenchman Eric Fraudeau.

Eric only started Cook’n With Class three years ago, yet it’s already one of Paris’ most popular English-language cooking schools. (It was actually the number one attraction in Paris on Trip Advisor when we are in town – above the Eiffel Tower!) Eric’s worked with the best – Joel Robuchon and Alain Ducasse – and fell into teaching by accident after his wife’s guests*, learning that he was a chef, started asking if he could teach them how to make crème brûlée.

Italian-born Pino Ficara, my instructor today, moved to France with his parents when he was young, but followed a woman to New York (who later became his wife) where he pursued his dream of becoming a chef, completing pastry school as well as chef’s training at the Institute of Culinary Education.

Ten years later, after working in restaurants and running a catering business, he returned to Paris, and he’s now preparing to take me through the first steps of the other desserts we’re making today: a classic tarte tartin (an upside-down apple tart) and some diet-demolishing chocolate ice-cream. It’s going to be a busy morning!

But, first, a confession… I love to cook (I guess that’s obvious from my Grantourismo content), but I don’t enjoy baking. I like the free-flowing nature of cooking hot stuff, and seasoning, touching, and testing. I like the rush of the last minute assembling of a dish. But timers, measurements down to the gram, begging yeast to perform, sifting, sifting, and more sifting, all those eggs, all that sugar… ugh…you get the picture.

10:17 Pino pours the cream over the caramelized sugar when it reaches the desired temperature – confirmed by the digital thermometer rather than a clumsy, messy sugar thermometer that most of us stick in the side of a pan. I’m already impressed by the precision required and the weights of the other ingredients he’s now measuring by the gram.

10:30 We start separating eggs to make the macaron mix. Pino tells me these are normally separated a few days in advance and kept in the fridge. What kind of voodoo is this?! While only the whites are used for macarons the egg yolks are never wasted in a pastry kitchen and are used to make ice cream. We separate them the fast way – with our fastidiously washed hands, I might add. The egg white mix for the macarons must be as ‘clean’ as possible, so we strain the mixture.

“Our classes are really hands-on,” Pino says, “Although occasionally some people don’t want to touch a fish or chicken or pork… some people freak out!” I’m freaked out that people have become so removed from the ingredients that make up the dishes that they love to eat. I’m also nervous about the eggs only just being separated. If these macarons don’t rise or if they crack (the two worst things that can happen), I’m going to be gutted.

11:08 My bragging about being in famous kitchens (mainly getting in the road of great chefs while researching stories and taking photographs) has led to me being given more work. I love it, as there’s nothing worse than just watching someone else cook while you stand around being useless. Well, unless you have a glass of wine but it’s still too early for that. 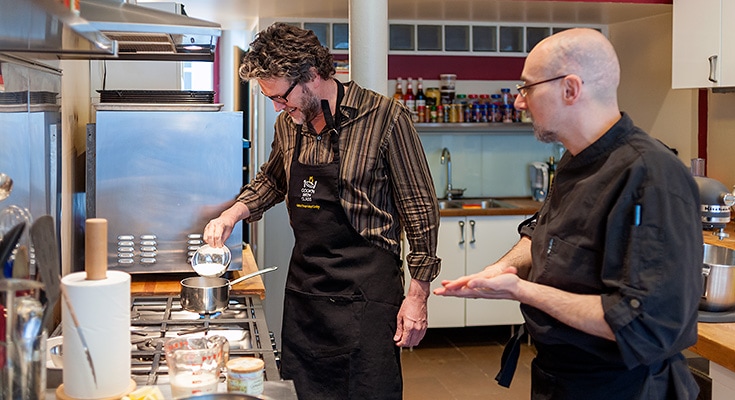 I’m now mixing together the whipped whites and the almond meal and sugar very vigorously. I’ve made meringue before but have never treated it like this; that’s because meringue is meant to be light and fluffy not beaten to within an inch of its life! I’m wondering if Pino has the wrong recipe… after all, he’s Italian! But then I recall that the word ‘macaron’ comes from the Italian word ‘maccherone’ but don’t tell the French that, they get awfully upset.

11:15 We go over to the food processor and Pino quickly mixes the butter and flour for the crust of the tarte tartin. I’m relieved that we’re not making puff pastry from scratch. You really don’t want to know how long that takes.

11:25 The longest process of the day starts – choosing the colours for the macarons. I’m not clear if it normally takes this long, or if it’s just because Lara’s here (taking notes and photos of course.) We finally decide on red, green and orange, although Pino warns that to achieve a vivid colour you need to use titanium dioxide to make the mixture whiter to make the colours stand out. We skip the E171 (titanium dioxide). It doesn’t sound very appetizing.

11:30 Colours mixed, Pino shows me some piping bag tricks. The tricks are brilliant but my piping is far less dazzling, even though Pino has placed a guide sheet beneath the parchment. Let’s just say the first few looked like those double-sized macarons you see in Paris bakeries…

11:40 Now I’ve got my groove. I’m mixing my own colours, putting together my own piping bags, and piping pretty consistently sized shapes. I’m actually enjoying baking. 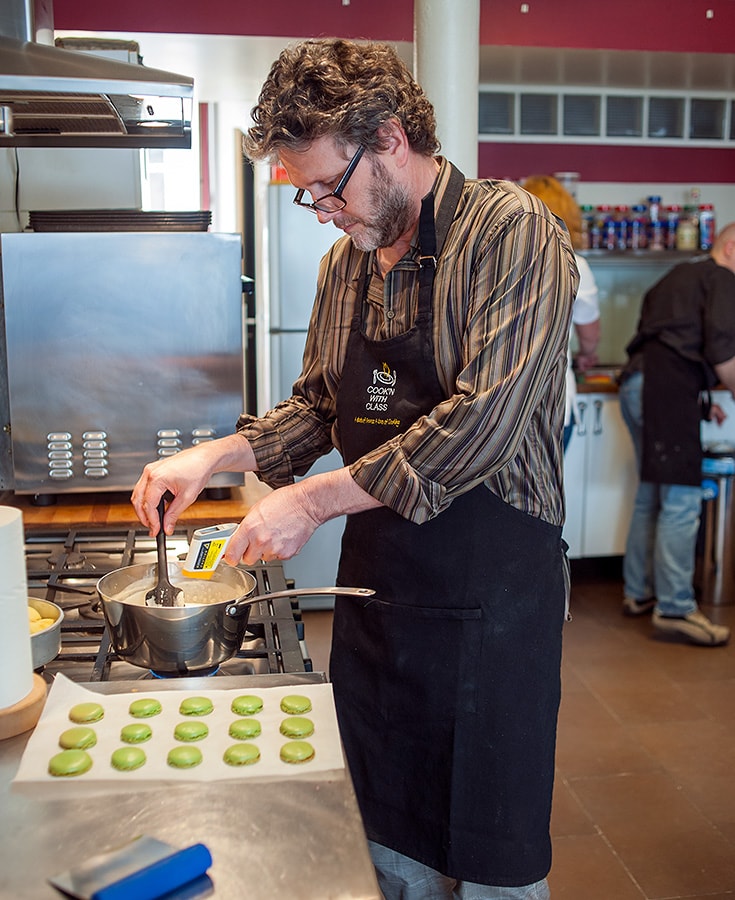 11:50 Macaron shells made, we start peeling apples for the tart. Pino has three types of apples. I’m relieved that it’s the rustic tart where you chop the apples into quarters and not the one where you have to slice the apples thinly into a trillion pieces.

12:00 We’ve put some water and sugar into a pan on the stove that will become the tart case. Pino reveals that caramel is best just before it burns and warns that it should never be left alone on a kitchen stove.

12:10 We take a sneak peek in the oven to see how our first batch of macarons is doing. Pino has marked the time that each sheet was prepared so he knows when they should go in the oven. We start making the chocolate ice cream and Lara points out that there is something smoking on the stove. Caramel saved in the nick of time! 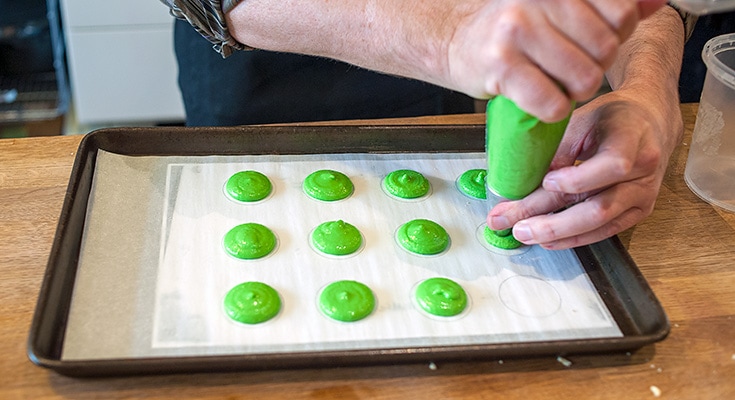 12:15 I’m feeding small pieces of butter to the Kitchen Aid. It appears to be enjoying them very much. I just wish I could remember which dish it was for!

12:20 It’s for the caramel filling for the macarons that are just coming out of the oven. They’re damn perfect! Now I’m excited! Except another piping bag has appeared…

12:30 I’m carefully scraping the macarons off the baking sheets. These things are sticky when they’re fresh out of the oven.

12:55 Now Pino is bashing some pastry within an inch of its life. He says it makes the pastry roll out without cracking. I actually think it’s because he’s upset that I’m already taking full credit for the macarons.

13:00 We have half a dozen trays of macarons and I’m piping like I’m on a production line. Who is going to eat all these macarons? Perhaps I’ll go out on the street and listen for people with American accents and give them away. Lara suggests we take some to a dinner party at a Parisian’s home we’ve been invited to the next night. Good thinking! That gesture should impress.

13:20 I’m still piping. Think I’m getting a cramp. Pino upturns the tart. One corner doesn’t come out right. I start calling it ‘his’ tart.

13:30 I now have all the trays of macarons done. They look like the ones in the famous patisseries except without crazy foie gras fillings of the likes of Pierre Hermé. My work here is done.

13:40 So is the ice cream. Eric and his admin staff troop in to try some – surely they don’t do this every day? They’re slim too! The ice cream is not perfectly frozen (it needs another hour in the freezer) but at least we can finish our bowls in record time without brain freeze, because Lara and I have another appointment to get to (lunch), and Eric and Pino have another class to run… 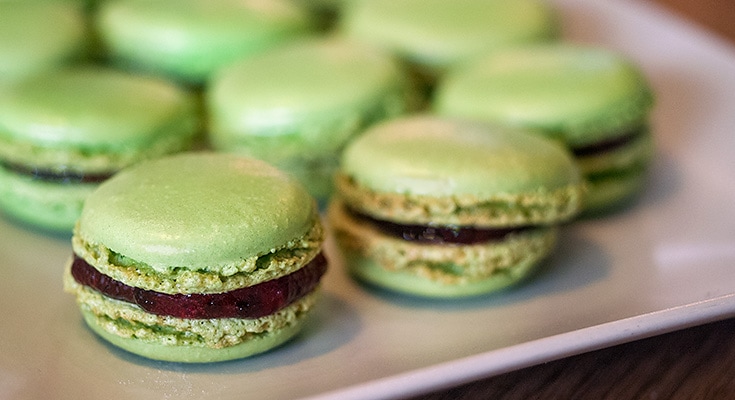 The Verdict on our Paris Cooking Class

A Paris cooking class is a must if you’re a foodie in the French capital, and learning something as quintessentially Parisian as mastering the art of making macarons was pretty special.

Eric, Pino and the staff at Cook’n with Class were fantastic – very down-to-earth, friendly, and relaxed. They made the whole thing really fun and easy.

Most importantly for me, it was not ‘demonstration’ cooking – I actually felt I was working in the pastry department of a commercial kitchen. And I loved it!

I have a confession though: the next night at our Parisian friend’s place, I told her that I made the macarons by myself. Sorry, Pino…

*Eric’s wife also manages Paris holiday rental properties although we only discovered that at the end of our Paris cooking class – otherwise we would have stayed with them so Terence could perfect his crème brûlée!

P.S. If you love macarons (the new cupcake, non?) but the precision of pastry isn’t for you, see Lara’s tips on where to buy them in her Paris Take-Homes: Traiteur Treats.