The best Paris food souvenirs include delicious French traiteur treats such as pâtés, vinegars, preserves, and spices, and épicerie specialties such as gourmet ingredients, fine olive oils, wonderful charcuterie, and even cooking utensils. These are the edible souvenirs we recommend you take home when you’re in Paris.

The best Paris food souvenirs can be found in French traiteurs and épiceries which can be an absolute delight or utter torture to shop at depending on whether you go on an empty stomach or not. We always recommend doing any edible souvenir shopping immediately after lunch.

Two of the best things to do in Paris as far as I’m concerned are eating and shopping. There’s so much to eat and so much to buy that for a shopaholic-foodie, Paris is heaven, and these traiteur treats and épicerie specialties will take you to foodie paradise.

Once upon a time in Paris, a traiteur was an early form of the restaurant, a kind of private dining club in the kitchens of guilds in the 18th century where people would go and order set menus. These days a traiteur might be anything from a caterer to a gorgeous shop or department store section selling fabulously presented delicatessen goodies and take-away food, sold fresh, cooked or packaged, everything from pâtés, terrines and rillettes, to vinegars, preserves, and spices. 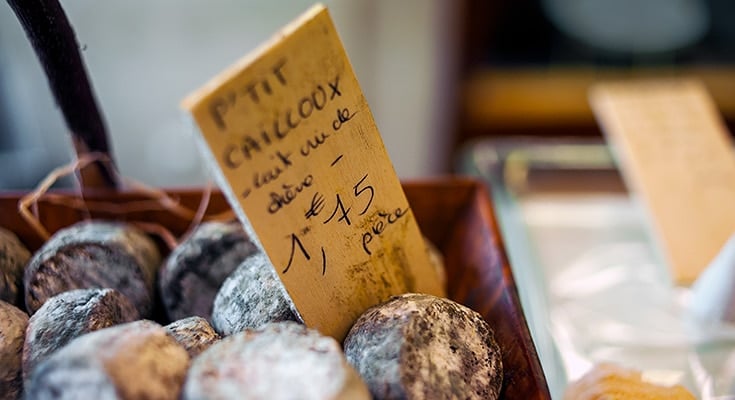 There’s also some crossover with the épicerie, which originally described a corner grocery shop or convenience store, but in recent years has come to refer to a shop selling more exotic, ethnic, artisanal, or refined gourmet products and ingredients, including spices, nuts, dried fruits, olive oils, vinegars, charcuterie, and even cooking utensils.

So, oui, I am cheating un petit peu by labelling all the Paris food souvenirs below as traiteur treats, although you’d certainly find a selection of exotic goodies, as well as sweet delights (chocolates, macarons, pastries, biscuits etc) and savoury delicatessen products (cheeses, sausages, marinated vegetables, and so on), along with gorgeous cooking books, if you went to one of the sumptuous gourmet food emporiums such as Hédiard, Fauchon and La Grand Épicerie de Paris at Le Bon Marché department store.

I’m diverging from previous formats for my take-home posts from Marrakech, Jerez, Barcelona and Ceret, in which I suggested just four to six products. This is simply because there’s so much wonderful stuff to eat and so many mouthwatering Paris food souvenirs that I found it impossible to narrow down your must-buys to just a handful. This time I’m suggesting genres of edible souvenirs to buy and places to purchase them where we like to shop whenever we visit Paris.

Could there be Paris food souvenirs more quintessentially French than cheeses? If your country’s Customs regulations allow you to take home a selection of deliciously smelly French cheeses then this is my top recommendation. Fortunately, many of the fromageries or cheese shops will vacuum pack your cheese selection, and some will even organise shipment if you can’t or don’t want to take them on board the plane. 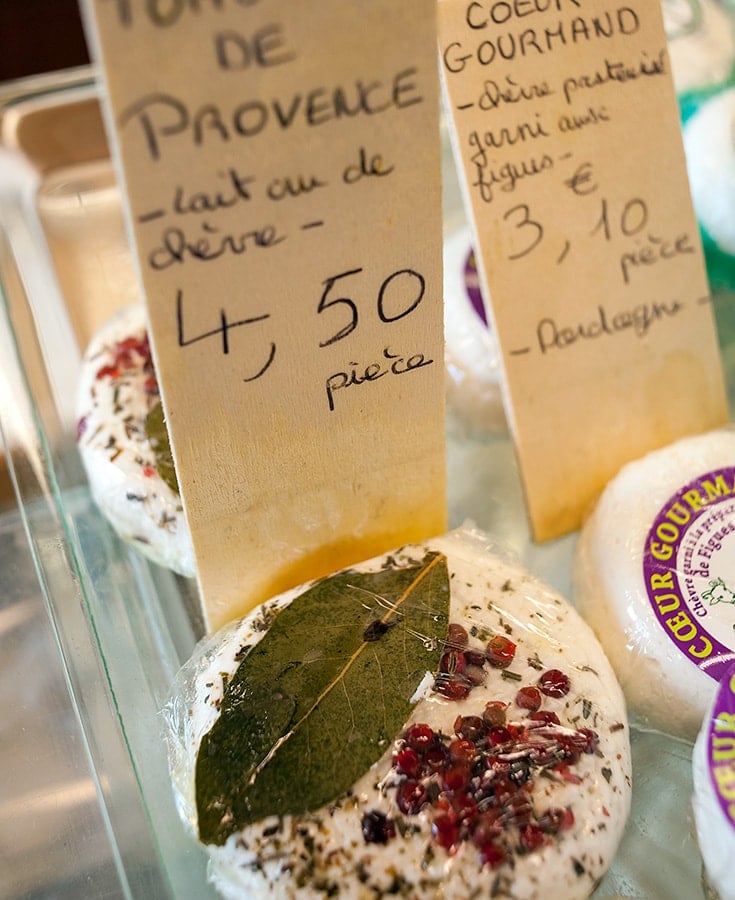 The next best Paris food souvenirs for me are charcuterie products such as sausages, hams, cured meats, patés, rillettes, terrines, and confits. Many  Parisian foodies regard the award-winning Gilles Verot to be the very best; he also has a shop in New York. In our own neighbourhood here it’s hard to beat Les Papilles Gourmandes (26 Rue des Martyrs), where you’ll find the finest regional produce and gourmet products from around France, identified on blackboards.

Rue des Martyrs, Rue des Abbesses and Rue Lepic are dotted with more of the same mouthwatering shops, along with excellent fromageries and pâtisseries, as well as boucheries, poissonniers and boulangeries. At some places, you can also ask for your charcuterie to be vacuum-packed if it’s not, and you’ll only have to pay a little extra for this.

The oldest Paris trader of spices, saffrons and vinegars is Goumanyat & son Royaume, owned by six generations of the Thiercelin family, which we also visited on our Context foodie walk. They have a wonderful selection of vinegars, olive oils and sirops (including some creative flavours), and, as you’d expect, a fine selection of spices (including some unusual ones) at their ‘sniff bar’, as well as cookbooks and cooking tools.

Everyday as we walked from our ‘home’ on Rue des Abbesses down Rue des Martyrs into the centre of Paris, we passed Première Pression Provence, and every time I salivated (a confession: I get much more excited by olive oil than chocolate). A creation of the man behind L’Occitane, this gorgeous store specialises in fine olive oils from the south of France and each attractive tin is labeled with details of the olive oil producer. The tins are beautifully displayed, filling floor to ceiling shelves, and you can buy a selection of small take-home sizes, and most importantly, you can try before you buy.

Parisian and expat foodies love to debate who Paris’ finest chocolatier (specialist chocolate-maker) or pâtissier (pastry chef) of the moment is, and these days there’s an increasing overlap between the two specialist crafts. While visitors to Paris have traditionally headed to shops such as Cacao et Chocolat and La Maison du Chocolat for their truffles, ganaches, pralines and glazed fruits, these days they’re making a beeline for elegant (and expensive!) stores belonging to superstar chocolatier-cum–pâtissiers who made a name for themselves by supplying superstar chefs such as Pierre Gagnaire. We love the shops of Gérard Mulot, Arnaud Larher, Patrick Roger, and Jacques Génin (133 Rue de Turenne), which we also called into on Context’s Paris foodie walk.

Set to take the world by storm in the way cupcakes did (thank god that fad is over), macarons make a rather sophisticated souvenir or gift if you can bring yourself to give them away. Try Paris pastry institutions Dalloyau, which has been making delicate macarons since 1802, and Ladurée, probably the most famous macaron producer, around since 1862 (they have exquisite packaging), as well as Gérard Mulot who in addition to creating classics, makes exotic-flavoured macarons with rose, ginger, and coconut; and Pierre Hermé, dubbed the ‘Picasso of Pastry’, who offers a bespoke Macaron Haute Couture service. (If you prefer to learn how to make them yourself, see this post on a Paris cooking class Terence did.) 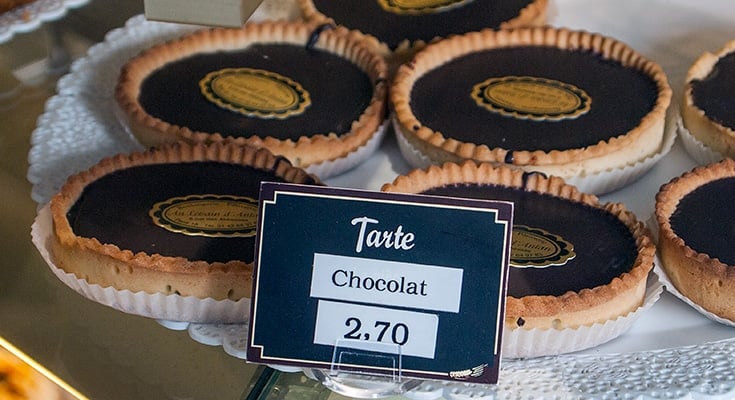 One of Paris’ oldest purveyors of fine teas is Mariage Frères, founded in 1854, although the family’s descendants traded tea as early as 1660 when they did business with the Shah of Persia on behalf of Louis XIV. Responsible for pioneering the idea of a one-stop tea shop-cum-retail store, their aromatic, exotic and beautifully-packaged teas are probably the finest and most recognised.

French wine… how can you leave Paris without buying some? Fortunately, Paris has no shortage of superb wine shops and you’ll find yourself stumbling across them on every block. Longstanding favourites of ours include Paris’ oldest wine shop, Les Caves Augé and Legrand Filles et Fils, a nice spot for a drink when you’re exploring the passages, while Lavinia has one of Paris’ largest selections of French wines.

These days every Paris neighbourhood seems to have a wine shop specialising in the fashionable organic wines or vin biologique. In Montmartre, while tiny Cave Des Abbesses (43 Rue Abbesses) came recommended to us by a few people, we always found the proprietor to be dour and disinterested in his customers; much more enthusiastic and helpful is the young, friendly owner of Raisin (64 rue d’Orsel). 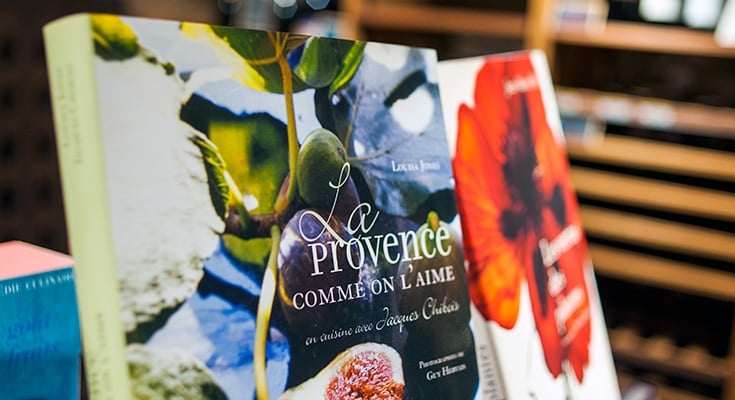 Paris’ expat foodies have always been smitten with the clutter of kitchen supplies at E. Dehillerin although we’ve found that professional chefs prefer one of three emporiums for kitchen utensils, all located on Rue Montmarte: Mora, A Simon and La Bovida.