It’s not every day that world’s greatest bartender teaches you to make a signature cocktail at Bar Hemingway at The Ritz.

As we’re on a quest to travel more sustainably this year and to try local produce wherever we can, we’ve been drinking an awful lot of wine. We’ve tried everything: British wine in London, Sherry in Jerez, Cava in Barcelona, and Languedoc-Rousillon wine in Perpignan and Ceret. So while we were looking forward to sipping some Sancerre in Paris, we were craving something different… cocktails.

As we’re learning things as we travel and my perfume-making workshop fell through (something to do with a volcano), I decided that if Terence could cook macarons, I could learn to drink make cocktails. And who better to teach me seeing we are in Paris than the man named ‘the World’s Greatest Bartender’ by Forbes magazine.

I made an appointment to meet the world’s greatest bartender Colin Field, head bartender at the the world’s most famous bar, the atmospheric Bar Hemingway at The Ritz, one of Paris’ finest and most historic hotels.

A favourite drinking spot of Marcel Proust, Rudolph Valentino, Charlie Chaplin, Greta Garbo, Marlene Dietrich, Coco Chanel, F. Scott Fitzgerald, and at the end of World War II, Ernest Hemingway after whom it was renamed, Bar Hemingway is said by many writers to be the birthplace of the Bloody Mary. Author of The Cocktails of the Ritz Paris and a resident of Paris for 29 years, Colin Field immediately dispels that myth. 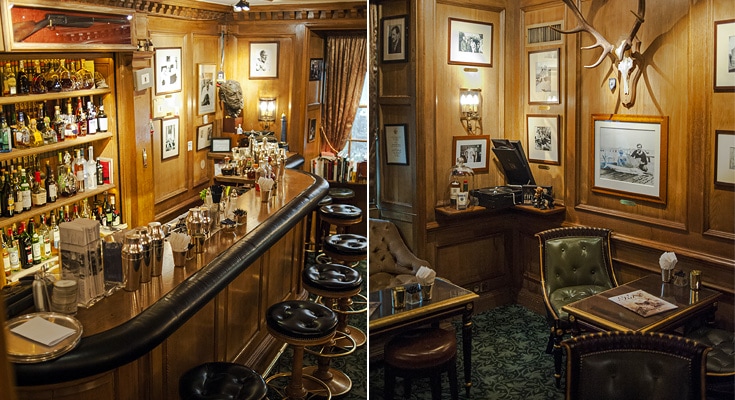 “The Bloody Mary was definitely not invented here – nor was it invented at Harry’s Bar,” he tells us. “It was actually created at La Florida bar in Havana in 1939. Although it is true that we do the best Bloody Mary in the world,” Colin says modestly.

Colin is a character. If a bartender’s role is to amuse the customer with entertaining conversation as much as it is to delight with great drinks, then Colin is a master.

My mission to learn how to make a Bloody Mary quashed, I ask Colin what he should show me how to make instead.

If eyes do light up other than when a reflector is pointed their way, then mine would have been shining, because ‘serendipity’ is my word. I seem to have spent my life making accidental discoveries (it was also the title of a screenplay I once wrote), so how fortuitous was it that Colin should pick that cocktail of all the fabulous concoctions he’s created? And so the lesson began.

Colin breaks off a handful of mint leaves and puts them in the bottom of the glass. Using tongs to gently release the flavour, he takes care not to muddle them, which he says is very important: if you muddle them you crush and bruise the leaves, which is not good. He pours in the Calvados, then half a glass of Champagne, then tops the glass up with clarified apple juice from Normandy. The finishing touch is a white orchid, or a red rose if it’s for a lady.

Serendipity is sublime. It’s a little bubbly. It’s light. It’s refreshing. And it goes down very easily. It’s a perfect drink if you’re in Paris in the spring.

Colin explains how he created the cocktail for a regular client, a lover of Cuban cigars, specifically the Romeo y Julieta. When Colin served the gentleman the drink, the man said “serendipity”.

“I didn’t even know what it meant,” Colin confides. “He told me and it seemed a perfect name for the drink. Sometimes it will take me up to three weeks to come up with a name for a cocktail.”

“If a cocktail is an art form, and if cocktail-making is an art, then I’m obviously trying to say something,” Colin explains. “Serendipity is a tribute to the Normandy region in a way. The Calvados appellation dates back to 1942, and they have always made apple cider there. When you smell the drink, you smell apples, but you also smell the earth. It’s France in a glass. It’s all local produce and the best France has to offer.”

I ask Colin what does it take to be the kind of bartender who can be considered an artist.

“A great bartender has style. Joe Gilmour was head barman at the Savoy – the good bartenders at the Savoy have a certain style. Joe would take classic cocktails and add his touch. My style is that I leave the classics as they are and make my mark on my own cocktails. 20% of the cocktails we do are classics and the rest are created by me,” Colin says. “When you go to Gagnaire or Ducasse, do you go for the French Onion Soup? No!”

“This is my style: simplicity and great quality ingredients,” he says. “The greatest cocktails have just three ingredients. I respect the ingredients and the portions.”

What if a client doesn’t like the drink that’s been created? “If a client doesn’t like a cocktail I try to find a cocktail that suits them and I adapt it to the taste of that person. Different age groups go for different cocktails,” Colin reveals. “When I see people I make three suggestions. If they’ve been to the bar before, somehow, I remember what they had. I have no memories for names but somehow I remember people and what they drank.”

As we’re occasionally entertaining from our holiday rentals this year, I ask Colin for some tips if we’re holding a small party and want to serve cocktails.

“Think carefully about what cocktails you want to serve,” Colin suggests, “If you’re having a small dinner party, go for just one beautifully prepared cocktail made with quality ingredients. If you’re holding a cocktail party, then only do three or four cocktails, and always put the glasses in the fridge so they’re cold.”

I wondered if Colin still got a kick out of bartending after all these years.

“Yes. But I do more than that now,” Colin says, “I also consult. I’m establishing cocktail-making exams in hotel schools to raise standards. I’m working with young people, and that’s what I enjoy most. Having developed an aura around the head bartender, I’m using that to try to inspire young people, to try to do some good. Young people have a joie de vivre in bars.”

I ask him the one thing that he loves most about his job. “The travelling,” Colin says immediately. “I’m off to Mumbai tomorrow to the Taj. I’m doing a banquet on a secret airfield for a special party and I’ll get to ride around in helicopters. It’s exciting. I love meeting people and I love moving.”

The Ritz Paris offers cocktail making courses at its Ritz Escoffier School, along with cooking and flower-arranging courses.