This Cote de Boeuf recipe – or more correctly, côte de bœuf recipe – from superstar French Chef Pierre Gagnaire became one of our most memorable souvenirs of our stay in Paris. But when we first posted it to our site back in 2010 we could never have known it would become one of our most read stories year after year.

This cote de boeuf recipe was almost a couscous recipe too! Back in the spring of 2010 in Paris, about a quarter of the way through our 12 month global grand tour aimed at inspiring you all to live like locals and travel more slowly, sustainably, and more experientially, we asked the legendary French chef Pierre Gagnaire his opinion as to what the quintessentially Parisian dish was that I should learn to cook in Paris for our series The Dish.

We could never have expected that, firstly, the chef would say ‘couscous’, and secondly, when we urged Pierre to choose something more traditionally French (as we’d just come from Morocco), that his Côte de Bœuf or cote de boeuf recipe would become one of our most-read posts.

“Think of a dish that you would tell someone they had to have if they came to Paris,” I prompted. After what seemed like an eternity, Chef Gagnaire, who had his head bowed, elbow on knee and chin in hand, raised his head, eyes sparkling, and pronounced: “Couscous!”

“Couscous?!” Lara and I both exclaimed. While it wasn’t the suggestion we were hoping for, the chef had a point.

Old-school Paris may be struggling with issues of cultural and national identity. And some Parisians were indeed struggling with the city’s increasing cosmopolitanism, as Lara had learnt on a walk with an academic that explored Paris’ multiculturalism in Paris. However, Parisians had firmly embraced the food of the Maghreb and couscous was a common dish found in many bistros, cafés, and take-away food joints across the city. 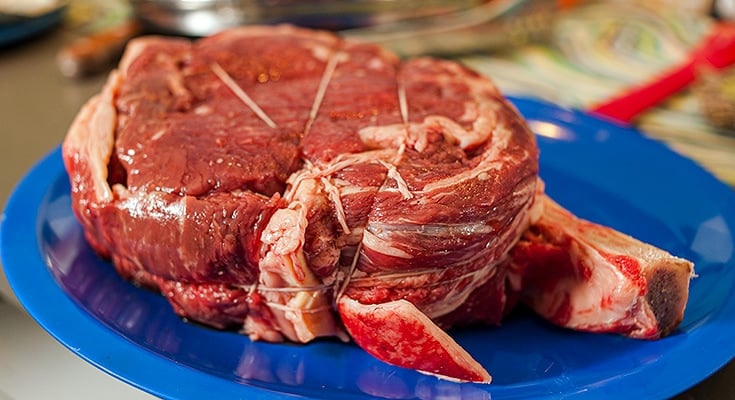 Having just travelled from Marrakech and Essaouira, where we ate couscous daily and I cooked lamb tajine for The Dish, we couldn’t possibly settle on couscous, regardless of how multicultural Paris is these days. Once I explained this, without hesitation Pierre declared “Côte de bœuf!” Perfect. I had secretly hoped he’d say this.

The previous year we had the privilege of being flies on the wall for a night in Pierre Gagnaire’s Dubai kitchen when he made one of his regular visits to his restaurant Reflets. That night, as Pierre’s head chef Olivier Biles fired orders of côte de bœuf so colossal, so fragrant, and so delicious, I had trouble focussing on anything else going on.

Olivier would send out the cote de boeuf in a cast iron Dutch Oven to show the customers the beautiful piece of meat they would be getting before it hit the oven to complete the cooking. The huge chunks of beef had been seared and were surrounded by fragrant sprigs of thyme burning like incense. The aromas that wafted from the pot were amazing, turning almost every head in the restaurant. 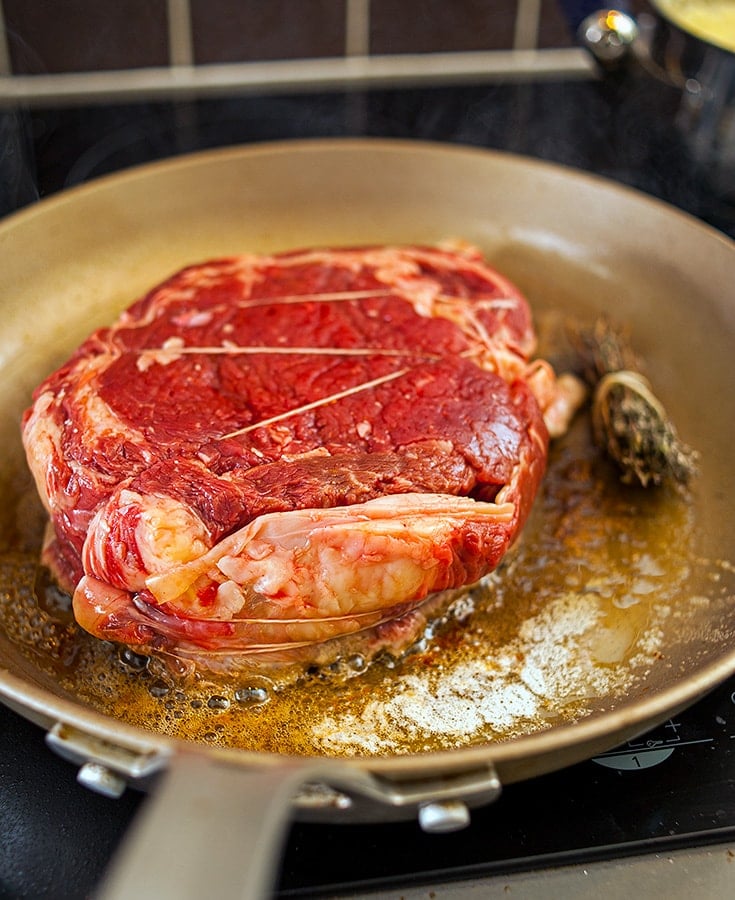 At the end of that night in the kitchen in Dubai, after I cooked the chefs’ dinner (for that story, you’ll have to click through to the link above), Pierre invited us for a meal at his restaurant next time we were in France.

So, after a long and very enjoyable lunch at Pierre’s Paris restaurant, we strolled across to the chef’s office nearby so we could get his opinion on what to make for our series on the quintessential dishes of places we were travelling to that year. I was secretly hoping that he would share his cote de boeuf recipe and some tips on how to cook this great hunk of burning beef.

Five minutes a side on the grill, ten minutes in the oven, and ten minutes rest, the chef told us, when I asked for the recipe. Simple as that.

I asked Pierre about the thyme that I had noticed being used in Dubai and he smiled. The chef knew how tantalising the perfume of those little twigs made the dish. He said that the thyme could go either in the pan or in the oven with the meat. He also said he liked to use a little butter, a squeeze of lemon juice, and a touch of vinegar at the end.

The chef’s cooking tips for his cote de boeuf recipe were the first of many welcome pieces of advice I’d receive over the next days. Every time I mentioned that I was making a côte de bœuf recipe, there would be words of wisdom offered, along with some very strong opinions on how to make this quintessentially French dish. There was: “serve it with pommes frites!”, “cook it bleu (rare)!”, but the most common response was just “Ooohh, côte de bœuf! Oh la la!” 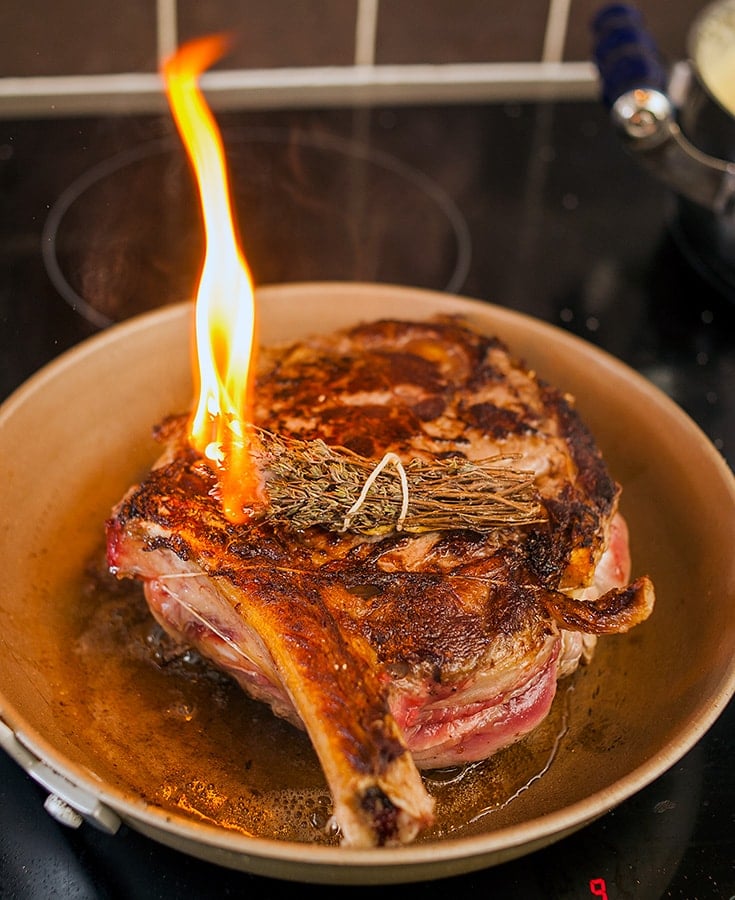 Pierre said he preferred to eat his côte de bœuf with pomme noisettes (potatoes carved into a hazelnut-shape), cracked black pepper, sauce béarnaise, and a fresh green salad, or perhaps just with potato Dauphinoise (layered slices of potato baked in milk and/or cream and a little cheese).

What was most critical for our cote de boeuf recipe, the chef said, was that we used meat from a good butcher as Parisians liked to eat their cote de boeuf recipe rare, and the quality was important. Pierre’s favourite butcher is Hugo Desnoyer – the go-to guy in Paris for quality cuts of meat. The cut used for côte de bœuf is actually a bone-in ribeye steak, but cut very thick through the ribs.

In the end, in keeping with the local travel theme of our trip, I settled for a local butcher in our Montmartre neighbourhood, some 200 metres from the apartment, who had been recommended to us. The butcher first asked how many people the beef was for and then suggested a ‘double cut’, which is normal for a côte de bœuf for two. Generally, you can only order it for two. This was around 1.2kgs of meat and bone.

The butcher then asked whether it was for the barbecue or the pan. 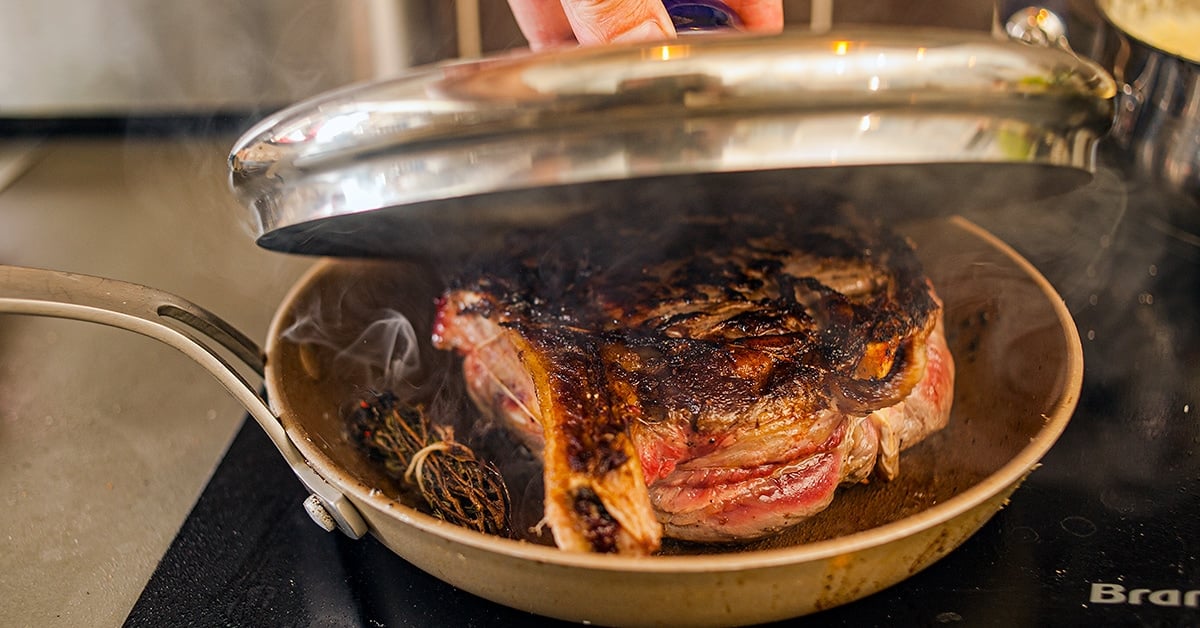 As it was for the pan, he trimmed the bone off and expertly trimmed some of the excess fat that runs through the cut and tied the meat up with string, placing the fat back on the outside of the cut. Beautiful.

But before we left, the butcher issued a stern warning: “Deux minutes!”, he said, while indicating with his hands in true French mime style that I should cook each side for two minutes before placing it in the oven. “Dix minutes,” he continued, miming the resting of the beef by placing his hands flat. He was insistent, and that’s what I love about the passion of someone who loves their ingredients. 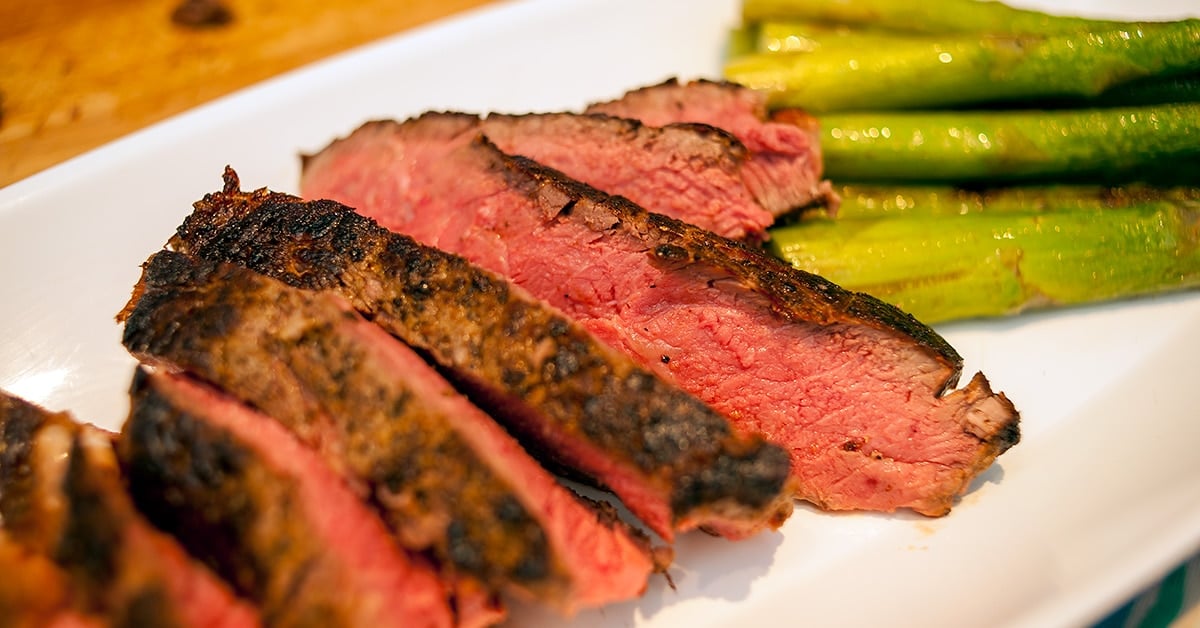 Before we get to the cote de boeuf recipe, it must be noted I made a couple of adjustments to the side dishes. Instead of pomme noisettes or potato Dauphinoise on the side, I went with a rustic mash fortified with mustard and a drizzle of red wine sauce (I’d had a similar side dish at Le Comptoir and loved it), and for a vegetable side I couldn’t resist using some of the fresh spring asparagus that was just hitting the markets. I made a sauce béarnaise for dipping both the beef and the asparagus into.

The bone-in ribeye steak is a delicious cut of meat but it is also an expensive cut, so if you’re unsure about oven temperatures or how to judge the doneness of the meat, use a meat thermometer. (I don’t travel anywhere without one.) You don’t want to get this wrong!

Do let us know if you make this cote de Boeuf recipe courtesy of chef Pierre Gagnaire in the comments below. If you have any questions, feel free to ask, and we’d love to hear any tips you may have.