That couscous could be considered Paris’ quintessential dish by one of the city’s star chefs, that an American tourist told us what she most loved about Paris was its diversity, and that a ban of the full Islamic veil (niqab) or ‘burqa’ as the French call it looks set to be introduced soon, were all things that had me thinking about multiculturalism in France during our stay in Paris. When our friends at Context invited us on one of their Paris walks, ‘Immigration and the Changing Face of Paris’ with Sophie Nells, who completed a thesis on Algerian immigrants in Paris, I leapt at the opportunity to do a multicultural Paris walk.

I was eager for greater insight into the complex relationship the French, and the Parisians in particular, have with their immigrants. According to a 2006 study, 8% of France’s population, that is, 4.9 million people are foreign-born immigrants, and France is home to Europe’s largest Muslim population.

Yet the cosmopolitanism our American friend finds appealling, and the exotic flavours Parisians appear to love – from couscous to sheesha (narghile) – are obviously not adored by all. An overwhelming number of comments left on the French government’s controversial website, Grand débat sur l’identité nationale (Big Debate on National Identity), established to discuss what it means to be French, were deleted because they were racist, while the proposed ‘burqa’ ban (which could also apply to tourists) is creating further tension. 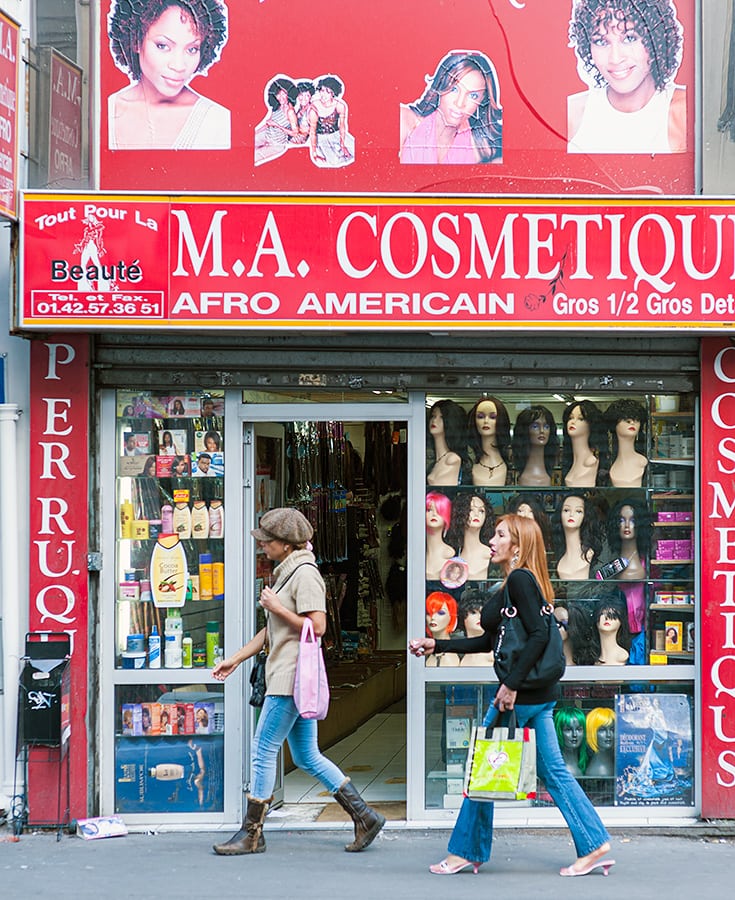 Our walk with Sophie began at Metro Château Rouge on Boulevard Barbès in a multicultural working class neighbourhood just a five-minute stroll from Sacré Coeur and our ‘home’ on Rue des Abbesses, but world’s away culturally and socially from the lives of the affluent white Parisians residing nearby on the butte (hill) of Montmartre.

Boulevard Barbès and the surrounding streets have a vibrant North African-cum-Middle Eastern vibe, lined with cluttered shops with names like ‘Bazar Orient’, African women’s hairdressers specialising in elaborate wigs and hair extensions, and telephone ‘boutiques’ advertising cheap calls to Algeria, Tunisia, Morocco, Mali, Cote D’Ivoire, and Senegal and so on. Strolling these streets, I felt like I was back in the Middle East. Almost.

Sophie gave our little group of six an introduction to the history of immigration in France, from the Middle Ages when skilled artisans from Germany and Spain came here to work, through the successive waves of immigrants in the 19th and 20th centuries: Russians in the 1920s, Spanish in the 1930s, Italians in the 1940s, various nationalities from Asia (especially Cambodia and Vietnam) from the 1960s onwards, and the waves of North- and Sub-Saharan Africans in recent decades up, when immigration became a hot topic in France. 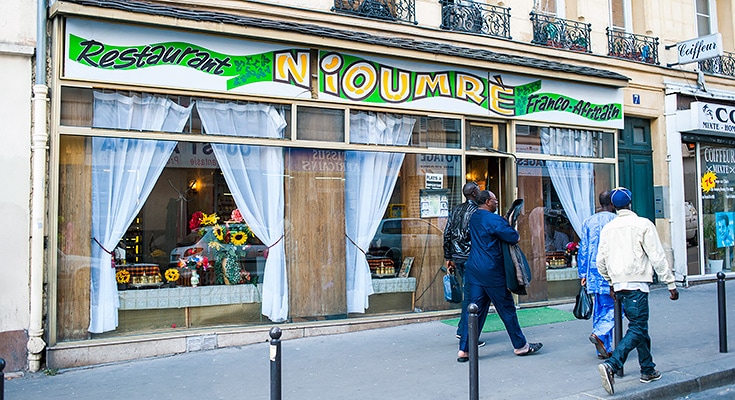 We stopped outside the Mosquee Al Fath on the corner of Rue des Poissonniers and Rue Polonceau where Sophie showed us a photo of the street crammed with worshippers praying during their religious Eid holidays, as she described the history of the mosque and its significance to local residents. While in France, it’s thought that 9% of the population are Muslims, in Paris one in every four people come from the Maghreb.

Around the corner on Rue de la Goutte d’Or – la Goutte d’Or is the name given to the surrounding area, and is also a name for cheap wine in France – we stop on the corner of a small square crowded with dapper old gentlemen from the Maghreb socializing, wearing crisp white jellabiyas (long North African robe) and leather babouches (pointy slippers) or plaid suits with a woollen fez.

Sophie briefs us on the demise of the French colonies, particularly Algeria, which the French felt was their own, and the violent Franco-Algerian war that followed – because it was here, where many Algerians, most of whom were living in cheap bedsits, would send their hard-earned money home to support the armed resistance struggle against the French. It was also here where the harkis or Algerian army auxiliaries had their headquarters and where there was frequent acts of repression upon the immigrants. And it was also here where tensions escalated to the point where unfathomable violence, even torture, occurred, resulting in the massacre by French police of hundreds of Algerians in Paris on 17 October 1961, a topic that was the main subject of Sophie’s research. 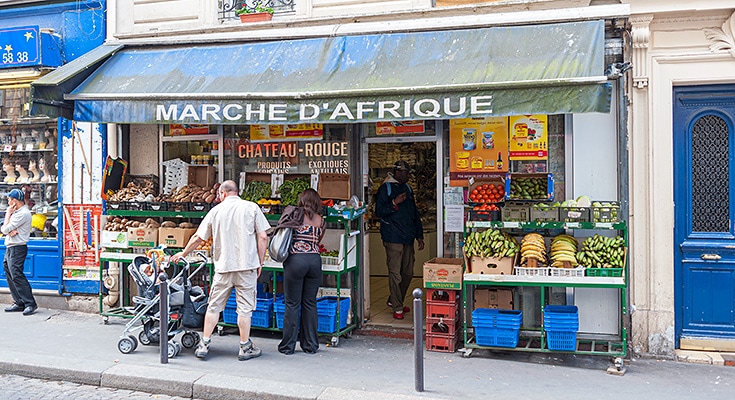 The controversial police headquarters remain open on Rue de la Goutte d’Or and when we stroll down to the bustling North African market (my favourite in Paris) that sprawls beneath the railway tracks and Barbès Rochechouart station, we are ourselves witness to a small act of repression: plain clothes policemen search an elderly man from the Maghreb (carrying little else but a bag of lemons) and a young veiled woman who appears to be his daughter (carrying nothing more than a handbag). Finding nothing, the police release them, the old man spitting at the plain clothes officers and a crowd of young men hurling abuse in French, Arabic, and even English, in their direction.

While it’s illegal to collect data in France based on ethnicity, Sophie shares some interesting statistics she’s discovered: in 2006, 8% of France’s population was foreign-born (a figure that excludes the large population of sans papiers or illegal immigrants), while here in La Goutte d’Or 34.2% of residents are foreign, compared to the Paris average of 16.6%, and some 36 different nationalities make the area their home.

Sophie explains how Paris’ immigrants have been marginalized, many forced through their economic circumstances to move into cheaper housing in the vast concrete projects of the banlieue or suburbs outside Paris. There, a lack of transport, depressing living conditions, and high unemployment contributed to the riots of 2005 when cars were set ablaze, shops and schools vandalized, and the area temporarily became a war zone.

It’s a very different situation in cosmopolitan Belleville, where we catch the metro next, where North African, Asians and Jews live and work side by side. As we stroll down Boulevard de Belleville, passing Jewish patisseries, Tunisian cafés, and Chinese-Vietnamese-Thai restaurants, Sophie explains that here there has been little of the tension or conflict of La Goutte d’Or or the suburbs. 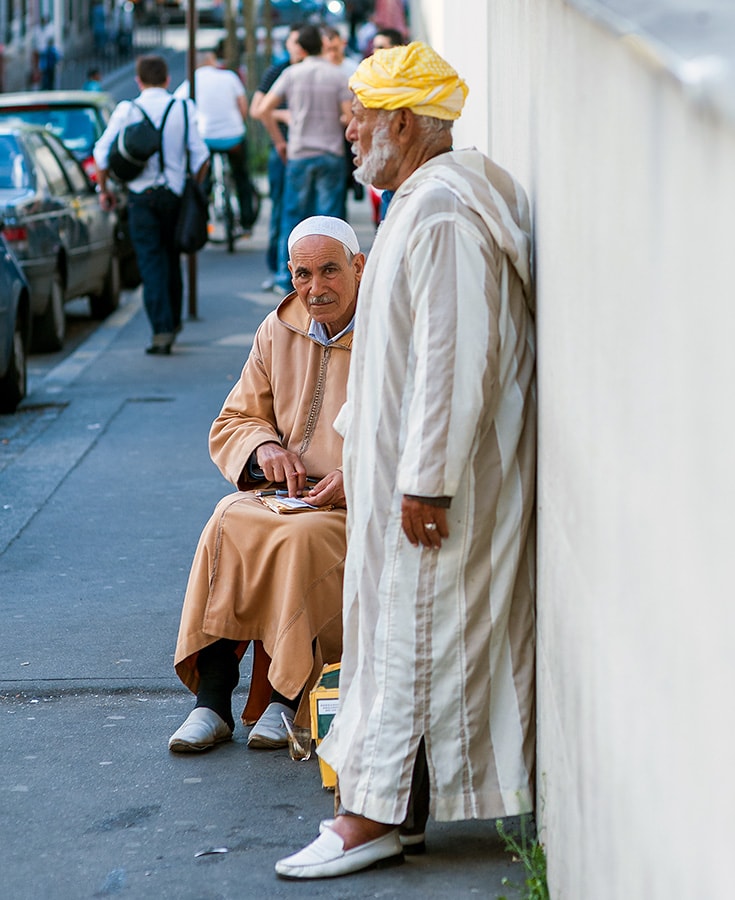 We take another metro ride south over the Seine to Gare d’Austerlitz and saunter through the lovely Jardin des Plantes to the Great Mosque of Paris, France’s largest mosque. Sophie is eager to end her walk on a positive note. The mosque, she tells us, was inaugurated in 1926 in recognition of the Muslims who fought for France in WWI, and around the corner the stunning cultural centre and museum that is the Institut du Monde Arabe or Institute of the Arab World, (where I buy some postcards), is another symbol of France’s special relationship to ‘the Orient’.

In the space of a few hours, Sophie has taken us on a stroll through some of Paris’ most vibrant neighbourhoods while adeptly covering the history of French immigration, revealing how it has historically been fraught with tension, and how the French have struggled with and continue to grapple with the changing make-up of their country. At the same time, we’ve seen how Parisians have embraced everything foreign and exotic, from couscous to the mint tea being sipped by the multicultural mix of people in the mosque’s courtyard café.

Among the Parisians, tourists and expats at the café, I detect familiar Arabic accents, that of affluent educated Arabs from the Levant and Gulf, and when I later wander into the mosque, I come across a group of young, veiled Emirati women taking photos of the architecture, gardens and each other with their professional Nikon cameras. Media students no doubt. I wonder what they all make of the cultural diversity of Paris, the halal butchers and pastry shops, the abundant couscous restaurants – and the burqa ban.