Paris walks are all about wandering the grand boulevards and exploring the elegant arcades. Amble about for an hour and you’ll understand how Paris gave birth to the flâneur, a stroller fascinated with street life, for whom sauntering the city was the best way to experience it.

Depicted in the paintings of Édouard Manet and the poetry of Charles Baudelaire, and analysed exhaustively by Walter Benjamin in The Arcades Project, the flâneur was considered “a botanist of the sidewalk” for whom shop windows merited as much attention as museum paintings.

Now, while we have no interest in wearing cravats or promenading turtles on leashes, as the flamboyant nineteenth century dandies did, we’ve decided to take to the footpaths and passages of Paris to learn more about the city, and who better to guide us than our friends at Context to show us some Paris walks?

Refreshingly, American-born Bernard is not a Francophile, although he admits to having grown fond of the city. A community activist for 10 years who burnt himself out helping others, Bernard decided he needed ‘me time’ and returned to study. Holding degrees in French Literature and Fine Arts, he moved to Paris to do a doctoral dissertation on architecture and urban planning.

Specializing in the Belle Époque period when Parisians developed new design strategies to make up for the architecture and personality their city had lost during Baron Haussman’s dramatic redesign of Paris, Bernard is the ideal man to lead us on a mosey around the city.

We begin on Rue de Rivoli, where, as we take in the elegant edifices stretching all the way to Place de la Concorde, Bernard vividly sets the scene for the four of us doing his walk today: “Imagine: in 1801 Napoleon III wants to create a majestic boulevard, a uniform street of elegant neoclassical façades and arcades, a monumental setting for the Louvre; he wants very particular businesses and luxury shops and he goes as far as banning bakeries so there are no smells… this becomes Paris’ first boulevard, intended as a ceremonial centre, inspired by Imperial Rome, that will connect important nodes around the city…” Things start to make sense already. 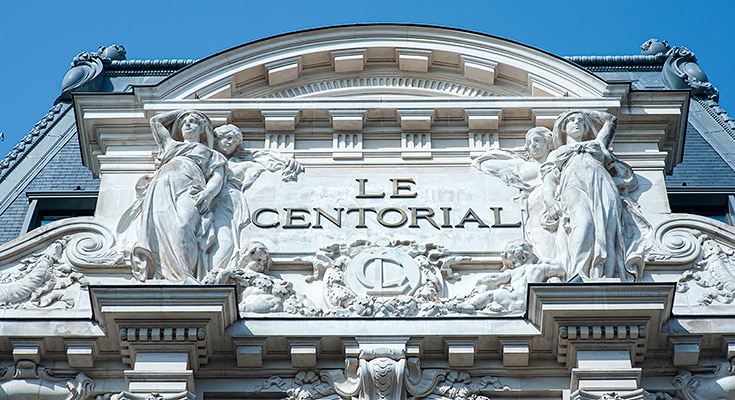 Ten minutes into our walk and we’re already thinking differently about a street that Terence and I have strolled dozens of times. We head into the pretty gardens of the Palais Royal, one of our favourite spots in Paris, and sit on a bench under a shady tree, as Bernard reveals how Cardinal Richelieu built Palais Cardinal in 1629 as his private palace, and how the Duc d’Orléans opened it to the public after having it redesigned in 1784, transforming it into Paris’ first shopping centre and entertainment complex, with a market and 140 shops, salons, museums, cafés, theatres, and casinos.

All levels of society kicked back under these arcades, from intellectuals to aristocrats, while all kinds of activities took place here, from prostitution to political intrigue. Bernard sums it up as “an organized setting in a city of chaos.” Even now its tranquil gardens belie the bustle of the rue outside.

We cross Rue des Petits Champs to visit elegant Galerie Vivienne, which in 1823 marks Paris’ first wave of development of the passages couverts de Paris or covered shopping arcades. Bernard points out the classical reliefs and marble mosaic floors that we’ve walked across dozens of times but barely noticed, the neoclassical details encouraged by ‘Emperor’ Napoleon to evoke classical times.

Bernard explains why the passages became so popular – it wasn’t only because they protected pedestrians from bad weather and traffic, but they gave women a public space that was acceptable for them to occupy. Not long after, adjoining Galerie Colbert was built and Paris would very soon boast some 50 or so elegant passages housing luxury shops and fashion stores, establishing the city as a centre of style and sophistication.

By 1840 there were over 100 passages, many of which would later be destroyed to make way for Haussmann’s majestic boulevards. According to Baudelaire and Benjamin, these architectural changes were responsible for the rise of the flâneur, who would wander Paris leisurely, window-shopping and people-watching, just as we visitors to the city do now.

We leave the light-filled arcade for the shady street and amble towards the monumental neoclassical Bourse de Paris, the city’s stock exchange, also built by Napoleon. There are more passages that can be explored north of here including the atmospheric Passage des Panoramas (my favourite), Passage Jouffroy (also charming), and Passage Verdeau, but our walk continues along Rue Quatre Septembre where Bernard explains how, of all of the revolutions that gripped Paris, none so completely changed the city as the urban renewal directed by Haussmann, of which this boulevard is an early example.

“As Napoleon’s right hand man, Haussmann has so much power at this time that he’s able to transform 60% of the city,” explains Bernard. “Up until now there is chaos, neighbourhoods have developed around professions, there is no way to circulate around the city, the railroads come in to the city in the 1830s creating a spreading of the city and populations developing around stations, and there’s a fear of stagnation for the city centre.”

“Haussmann extends Rue de Rivoli, making it longer and creating ways to get across the city from east to west; he extends the city limits and annexes districts around Paris to create some order; and he builds Boulevard Haussmann, Rue Réaumur, and Rue du Quatre Septembre,” Bernard tells us. “The most noticeable thing about the boulevards is their width – it was as much a military as an urban planning strategy so barricades couldn’t be built easily to avoid more revolutions.”

For the next couple of hours, like flâneurs we leisurely saunter the broad boulevards. We stroll to Place de L’Opera to take in the extravagant Opera Garnier, the centrepiece of a symbolic space. 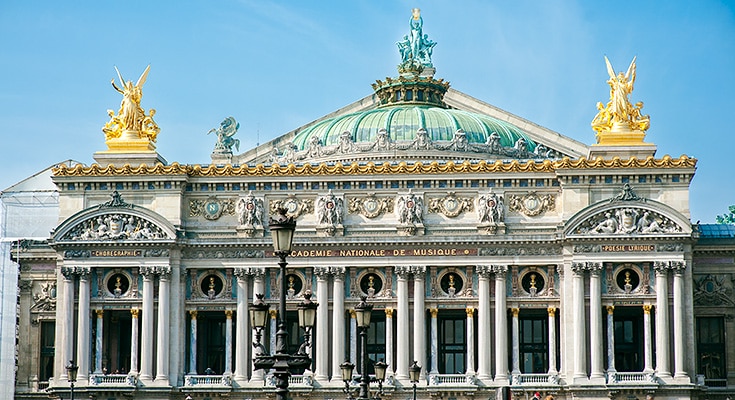 We wander around to Boulevard Haussmann and duck into Société Générale to admire the majestic iron and glass interior and sneak down to the basement to gawk at the gigantic bank vault.

We drop into the gorgeous late 19th century department store, Galeries Lafayette, to gaze up at its breathtaking Art Nouveau glass dome, and we continue our mosey along Boulevard Haussmann.

All the time Bernard points out architectural details which he situates within an historical context, vividly bringing the past into our present, and really making the period come alive.

By the time we arrive at the beginning of Rue Réaumur, the focus of Bernard’s research, we’re rather pleased to realise our senses are so heightened to the city that surrounds us we can now easily spot the changes in architectural styles and discern the dramatically different streetscape ahead of us.

Bernard explains that after Haussmann and the Second Empire fell, the Third Republic’s elected representatives relaxed building codes and held an architectural competition to promote individuality of creative expression and to create a more artful streetscape, the results of which we’re seeing now.

We cross Rue Réaumur and conclude our walk on narrow Rue Dussoubs, one of the remaining lanes of the old city.

“This is typical of the pre-Haussman era architecture,” Bernard tells us, pointing to the medieval stone. “The bottom stories were shops that opened to the street and tiny passages led to the living quarters at the back, so social and economic life was tied here. These were the homes of the rebellious people, the ones who were pushed out of the city by Haussman to the edges of Paris. They were highly unhygienic places, people lived in appalling conditions, but there was a social life here, and these were people’s homes.”

In a few hours, we’ve learned how Paris changed so radically and so rapidly and on a scale unprecedented, resulting in a chaotic medieval city becoming a very rational modern one, but until now, we hadn’t really appreciated the human cost and social impact of Haussmann’s project.

Benjamin’s flâneur may have been highly perceptive but he was a distant observer, yet if anything by the end of our three-hour walk, we feel closer to the streets of Paris than we ever have before. Merci Bernard.