This Moroccan lamb tagine with prunes and almonds recipe comes to you direct from our Marrakesh riad kitchen in Morocco, where I first learnt to make it from Jamila, the riad cook. A Moroccan tagine is essentially a slow-cooked stew made from meat, generally lamb or chicken, but can contain anything from duck to fish.

I first made this Moroccan lamb tagine with prunes and almonds recipe in Marrakech, Morocco, and it’s one of my favourite tagine recipes.

In the Moroccan Edition of Weekend Eggs I wrote about how there were many different versions of chakchouka – well, that’s nothing compared to the variations of tagine.

You won’t find two cooks who’ll agree on what exactly should go into a tagine as most follow their own family’s recipe, finely tuned in their ancestor’s kitchens over decades.

I watched Jamila, the cook at our Marrakech riad make this Moroccan lamb tagine with prunes and almonds and while I loved the results, there are a couple of things that I wanted to do differently so I’ve tweaked the recipe accordingly. Just don’t tell Jamila – she’s a force of nature!

Update: July 2021: If you enjoy our Moroccan lamb tagine with prunes and almonds recipe, check out our collection of our best stew recipes for more hearty winter warmers.

Moroccan Lamb Tagine with Prunes and Almonds Recipe from Marrakech

While tagines (also written as tajines) are mostly made with meat, we had a tagine with pulpo (octopus) that was sublime in Essaouria.

I ended up making the final version of this Moroccan lamb tagine with prunes and almonds recipe at our Essaouira riad, having shopped that morning in the vibrant local markets – and what wonderful markets they are!

I do realise the irony of cooking lamb tagine in a place known for its seafood, but there is fantastic lamb and beef in the region – in fact the meat sold at the markets comes from just 15 minutes away where the cattle happily graze on the lush green coastal grass. 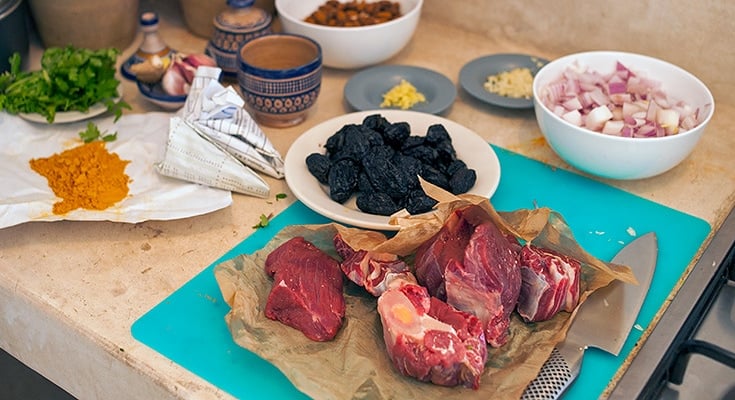 For this Moroccan lamb tagine with prunes and almonds recipe it’s best to use the shoulder, neck or shank of the lamb. One of the ideas of the dish – as with most stews – is to use the cheaper cuts of meat and render them tender through slow cooking.

I like to sweat the onions and the garlic down before adding the meat. Then I like to brown the meat as well. I think this adds to the flavour of the dish.

When you make this, leave plenty of time because it can take longer than you might expect for the meat to achieve that fall-apart tenderness. Think slow-cooked lamb shanks.

This Moroccan lamb tagine with prunes and almonds recipe is usually made in a tagine pot, a glazed clay base and a large conical lid that’s designed to guide the condensation from cooking back into the pot. 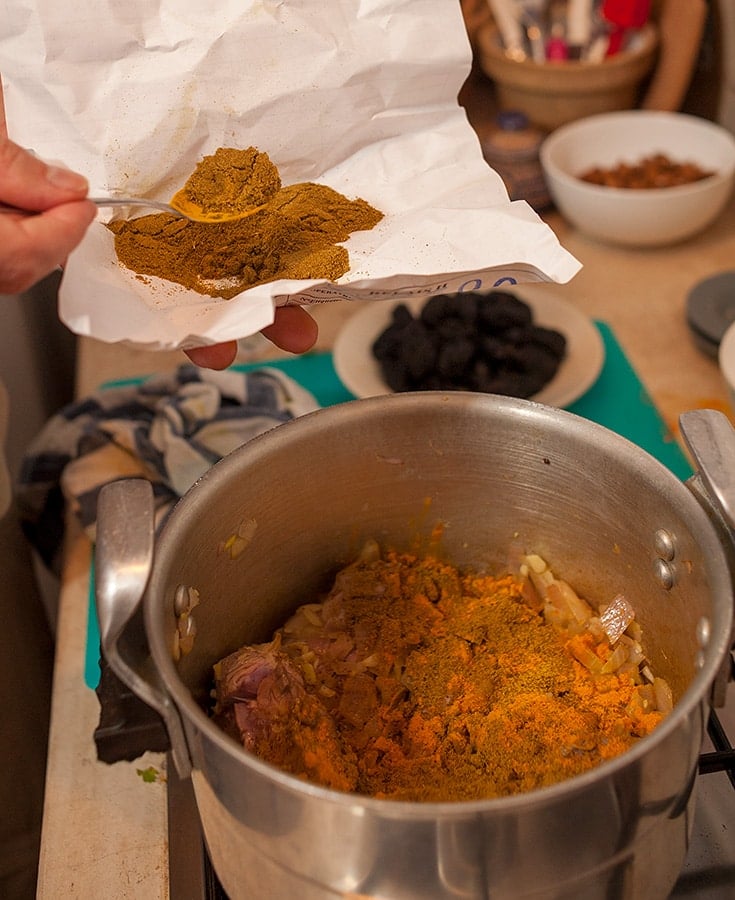 You can use a pressure cooker if you want, as it cuts the simmering time down to about an hour. Don’t quote me on that, though.

Sad confession: when making this dish in Australia years ago, we had to order in pizza because my tagine wasn’t ready at 10pm – even though it was on the stove at 6pm.

To be safe, leave it for at least four hours from the onions hitting the pan to possible serving time – or have your local pizza place on speed dial and eat it the next day.

The best things about this Moroccan lamb tagine with prunes and almonds recipe are that, firstly, it’s dead easy, and, secondly, it will fill your home with the most delicious aromas. Serve it with some crusty bread or plain couscous.

Note: you can buy the Ras el Hanout spice mix online if you can’t get all of the ingredients separately to make your own.

Do let us know if you make our Moroccan lamb tagine with prunes and almonds recipe. If you liked it, see my other posts in our series The Dish (now filed under Recipes) in which I search for and learn to make quintessential regional dishes, including a chocolate snack with a Michelin-starred chef in Barcelona, Rabo de Toro (oxtail stew) in Jerez, and Cassoulet in Ceret.