This Moroccan chicken tagine recipe with preserved lemons and olives makes one of Morocco’s most quintessential tagines, alongside lamb tagine with prunes and almonds. Infused with intense citrus notes, thanks to umami-rich preserved lemons, the comforting Moroccan stew is traditionally eaten with crusty round bread called khobz. It’s also delicious with couscous, just don’t tell your Moroccan friends!

There are a number of Moroccan specialties I remember most vividly from our first visit to Morocco in the late Nineties. Several of those became my favourite Moroccan dishes, the dishes we’d order for our first Moroccan meal on return trips, and the dishes we’d seek out at Moroccan restaurants around the world, including at our home at the time, the United Arab Emirates.

This Moroccan chicken tagine recipe with preserved lemons and olives makes one of those dishes, and Terence’s lamb tagine with prunes and almonds recipe, which he learnt to make from the lovely Jamila, the chef at the Marrakech riad we stayed in for a couple of weeks on our last trip, makes another.

The others? Pigeon bastilla. Couscous with seven vegetables. Moroccan chickpea soup. The snails on Djemaa el Fna in Marrakech. The olives at Casablanca’s Central Market. All the sublime seafood in Essaouira, but especially the sea urchins and Atlantic oysters. Moroccan pastries and mint tea, and…

I better stop there and tell you about this Moroccan chicken tagine recipe with preserved lemons and olives, but before I do, we have a favour to ask. Grantourismo is reader-funded. If you’ve used and enjoyed our recipes, please consider supporting Grantourismo so we can keep creating mouthwatering food stories and recipes for our readers.

You could click through to this post for suggestions as to how to support Grantourismo, such as booking accommodation, renting a car or hiring a campervan or motorhome, buying travel insurance, or booking a tour on Klook or Get Your Guide via our links. Or you could support our epic first-of-its-kind Cambodian culinary history and cookbook on Patreon or you could buy us a coffee, although we’ll use our coffee money to buy cooking ingredients for recipes instead.

You could also browse our Society 6 online shop, where we’ve got everything from gifts for street food lovers to food-themed reusable cloth face masks designed with Terence’s images;  or buy something on Amazon, such as one of these James Beard award-winning cookbooks, classic cookbooks for serious cooks, cookbooks by Australian chefs, cookbooks for foodie travellers, and gifts for Asian food lovers and picnic lovers. Now let me tell you about this Moroccan chicken tagine recipe with preserved lemons and olives.

I have a theory that the first dishes you eat on your first visit to a place you fall in love with are the dishes that become your favourites. Our first impressions when we travel are often the strongest, because everything is so wonderfully strange and new and our senses are heightened. Our impressions of food from our travels remain so strong because we use so many senses when we eat.

That explains why this Moroccan chicken tagine with preserved lemons and olives and the lamb tagine with prunes and almonds remain so vivid in our memories. They were two of the first dishes we sampled, served after an array of cold cooked Moroccan salads, and perhaps to the horror of some Moroccans, they were served alongside couscous.

It would be another decade, after multiple trips to Morocco, for pleasure and work, and a couple of decades cooking and eating Moroccan food, that I learnt that Moroccans didn’t traditionally eat couscous with tajine. So why did Moroccan restaurants serve tagine with couscous?

Perhaps for the same reason that some tourists at restaurants in Southeast Asia eat single dishes in consecutive order instead of sharing a few dishes served at once with their dining companion? Perhaps waiters are too polite to tell them that’s not how locals eat?

As a food writer, generally when I learn I’m eating something incorrectly, I’ll adjust my habit, especially if it’s going to offend a whole culinary culture – except, I’m sorry to say, where tagines and couscous are concerned. Please don’t make me do it. Because couscous is a grain, it just goes so well with tagine.

In the same way that curry is the perfect accompaniment to rice in Southeast Asia. And buckwheat to stews and braises in Russia. But never noodles. Don’t even think about eating beef Stroganoff with noodles. Okay, if you must, just don’t tell me, and don’t even think about sharing it on social media with me. 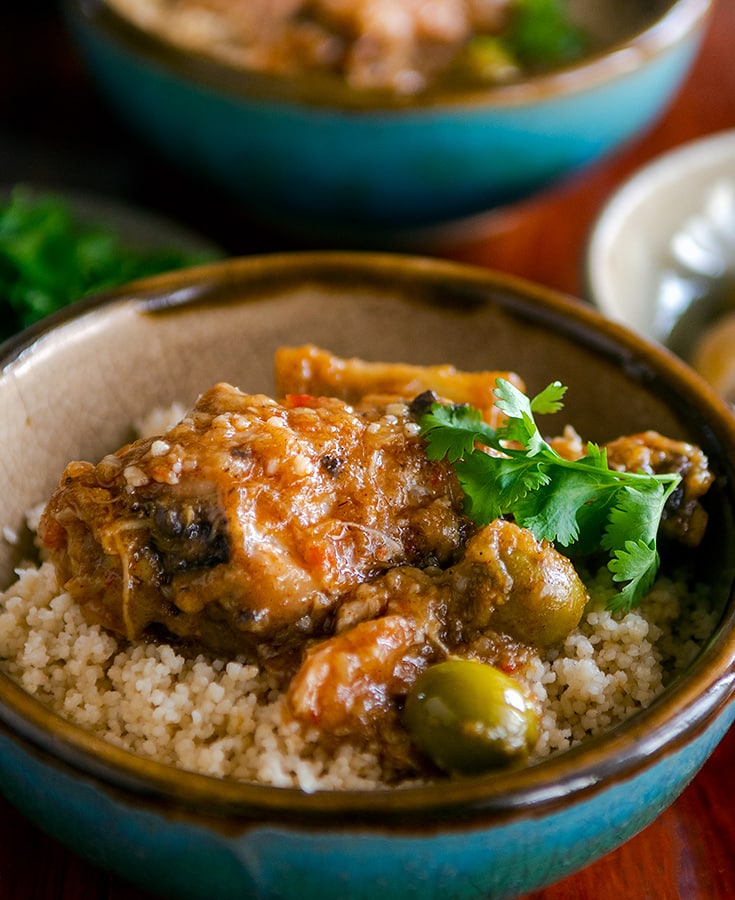 Now before you skip to our Moroccan chicken tagine recipe, I want to tell you about our new recipe series – rather, another re-booted recipes series. For the last ten years, since we shifted our base as a food and travel writer-photographer team to Southeast Asia – first to Thailand, Vietnam, then Cambodia – we’ve focused mostly here on the site on Southeast Asian food, with random detours depending on where our travels or interests took us.

When the borders closed and world shut down in early 2020, we threw ourselves into our Cambodian culinary history research and cookbook and for much of last year we were testing Cambodian dishes and posting recipes almost daily and when we weren’t publishing Cambodian recipes, we were sharing recipes from neighbouring countries related to our Cambodian food research.

But, alas, spoilt people born to multicultural nations such as Australia, who’ve been raised on food from around the world, cannot survive a pandemic on one region’s cuisine alone we realised after the first year! Having been born to a Russian mother and Australian father, I embarked on a side project and have been cooking and sharing my Russian family recipes.

This year we also relaunched Terence’s decade-old Weekend Eggs series on quintessential breakfast eggs dishes from around the globe, which we launched with this website and the yearlong grand tour of the world in 2010 that launched our Grantourismo project and our mission to promote slow, local and experiential travel.

Learning about local cuisines and how to cook local food in each of the places we stayed for two weeks at a time on that trip was a key part of the year-long journey, and in a series named The Dish we published the quintessential dishes of the places we settled into.

We thought it was time to revive that series and start cooking the local specialties that we considered along with The Dish that Terence ended up learning, cooking and sharing here. Along the way we will ‘revisit’ some of the places we immersed ourselves in that year – something we had hoped to do in 2020, but the pandemic got in the way.

The Cape Malay chicken curry that we published last week was the first recipe of our rejuvenated series, The Dish. This Moroccan chicken tagine recipe with preserved lemons and olives is the second dish. Here are a few tips to making this divine Moroccan tagine. 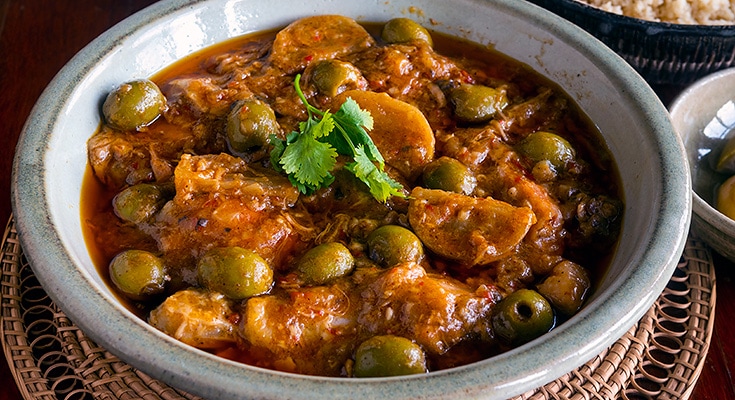 This Moroccan chicken tagine recipe with preserved lemons and olives is so easy so just a few quick tips. Do try to cook this in a tagine if you can – so, yes, a tagine is both the name of the dish and the glazed clay base and a large conical lid that you cook it in, which is designed to guide the condensation created from cooking the dish back down into the pot, which is what makes the chicken so moist.

You could use a pressure cooker if you like, as it reduces the simmering time, however, that’s nowhere near as lock for chicken as it is, say, for lamb or beef, so our preference is a Dutch oven or flat-bottomed wok, which we use for everything. You just need to make sure it’s a wok with a lid.

Some Moroccan cooks use a whole chicken, but there are just two of us, plus we don’t think chicken breasts work for this as they can still dry out a little, so we like to use chicken thighs and drumsticks.

Preserved lemons are essential as they are umami-rich with an intense yet mellow flavour. Don’t use fresh lemons as they’re too tart. If you can’t find preserved lemons in your nearest market or supermarket, you should be able to get them online. You can also make your own preserved lemons. I add a tablespoon of brine from the jar, as it adds even more depth and intensity to the dish.

We can’t get the heavenly olives that we fell in love with in Morocco here, so we’ve sadly used jarred Spanish olives. At least they’re from the Mediterranean. But do buy the big firm juicy green olives that they use in Morocco if you can.

Please do let us know in the comments below if you make this Moroccan chicken tagine recipe with preserved lemons and olives as we’d love to know how it turns out for you.