“The most important thing to Venetians has always been money,” social historian Monica Vidoni tells us as we begin her Venetian Renaissance walking tour. It’s something we’re hearing often – even by Venetians – but it especially resonates as we stand on Campo Santi Giovani e Paolo where Venice’s riches are on display here, as everywhere, in the stunning architecture, the elaborate decoration, the intricate details, and the ornate statuary.

Venice’s second most important square after Piazza San Marco (although you wouldn’t know it, as it’s lovely and low-key by comparison), the Campo is home to the monumental 13th century Church of Santi Giovani e Paolo, with its elaborate sculptures and tombs of 20 doges, and the Sculoa Grande di San Marco, with its splendid marble façade. 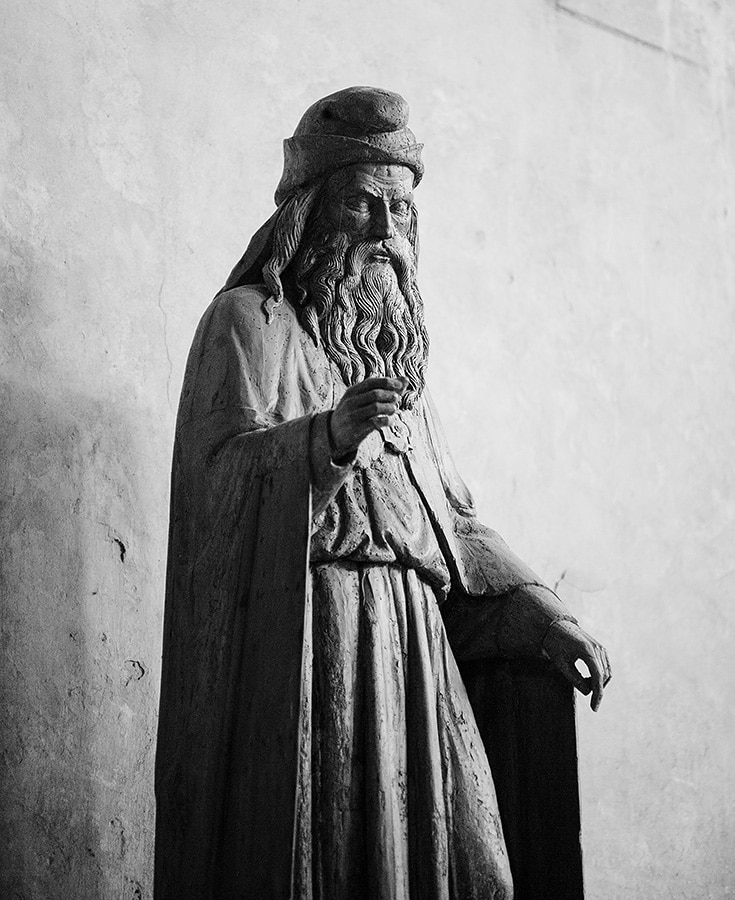 The scuola was one of Venice’s most powerful cofraternities, an organization for which networking was as key as charity work. It’s now a working hospital, which we visit, but with its intricate decoration and courtyard garden, it looks like no hospital we’ve ever visited.

Campo Santi Giovani e Paolo was a site of elaborate processions (there’s a funeral while we’re here), public festivals, and street parties held to engage Venice’s citizens. As we’ll learn over the next few hours, Venice’s public life brought together different people and there was a mixing of social classes and ethnic groups in Venice that didn’t occur in other European cities at the time. 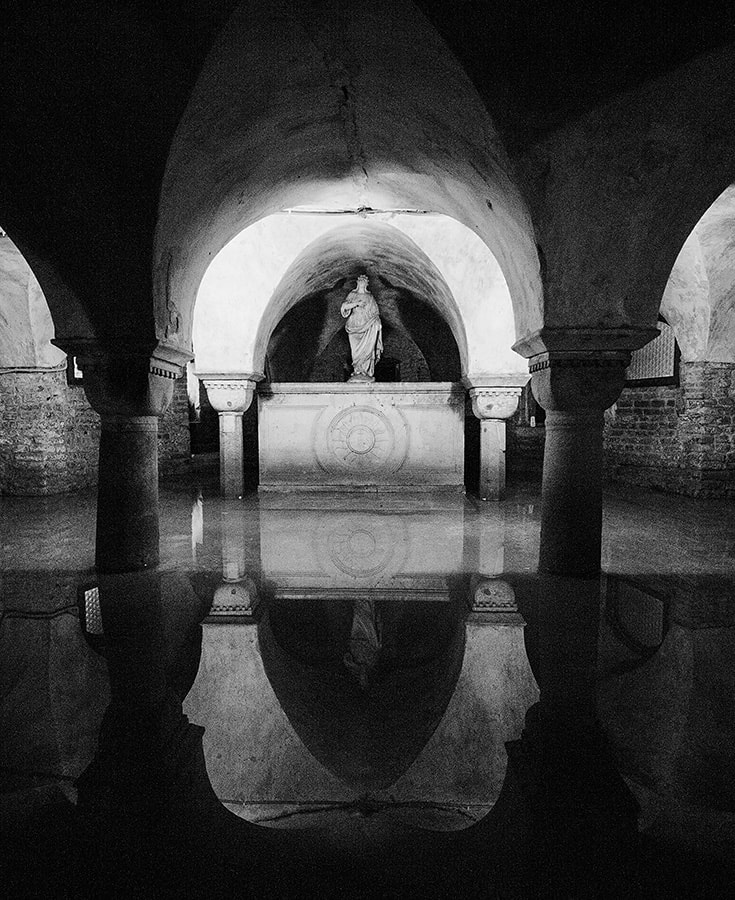 Monica’s insight is especially pertinent, since we’re standing beneath the colossal Verroccio statue of Venetian soldier Bartholomeo Coleono atop his handsome horse. Having made his fortune as a mercenary Bartholomeo Coleono wanted a legacy, promising the City of Venice his wealth if they buried him at San Marco and erected a statue in his honour. They did bury him at ‘a’ San Marco, just not the one he’d hoped.

On our way to Campo Santa Maria Formosa, we cross Ponte delle Tetta, the ‘Bridge of Tits’, one of two places (the other at Carampane near Rialto) where, from the 15th century, prostitutes were lawfully required to show off their ‘wares’ to attract customers. Hours were regulated because the brothels were city-ran, an initiative aimed at maintaining social order, preventing attacks upon respectable women, and discouraging homosexuality, which the Republic, concerned about the amount of time sailors at sea and their reproductive capacity, saw as a threat to the survival of Venice. 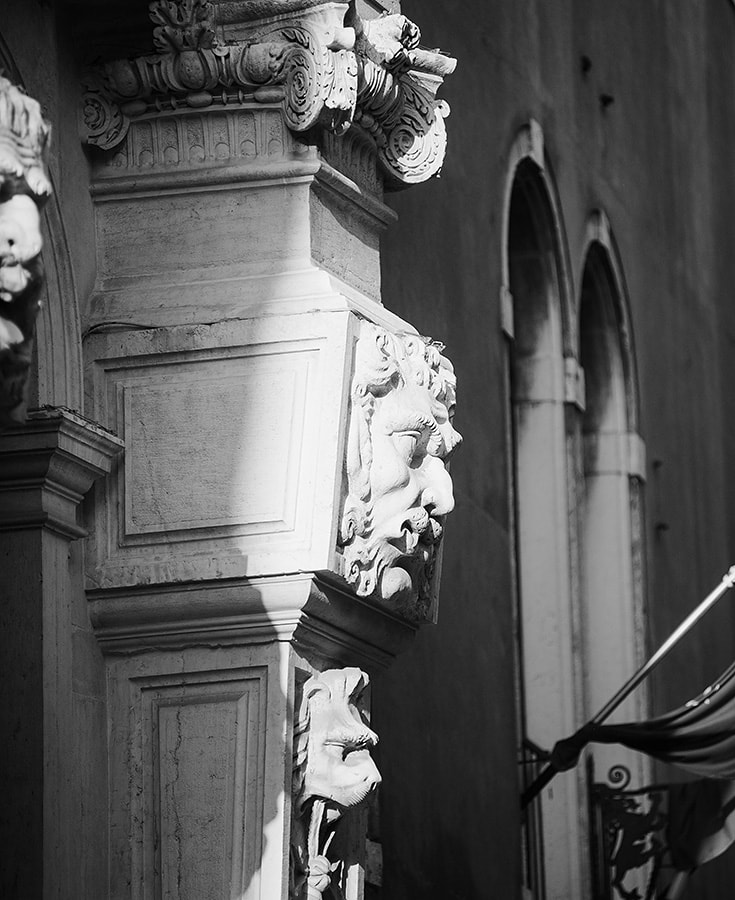 At Campo Santa Maria Formosa, we take in the beautiful Renaissance church with its Byzantine details and the lovely piazza (now home to cafés) where spectacles such as a Pamplona-style bull run were once held, where people and dogs would jump in to chase the bulls in what was a rather dangerously chaotic mêlée.

From there we stroll to Campo San Zaccaria and the 10th century church of the same name, once part of Venice’s most important convent whose nuns, some daughters of doges, were the most influential women in Venice. Noblewomen had a choice to marry or become nuns, and as marriages tended to be political alliances, women were married off at 14 or 15 to ensure they were virgins and to take advantage of their most fertile years. As a result, many women chose to take their dowry and servants and enter the convent rather than face an unhappy marriage. 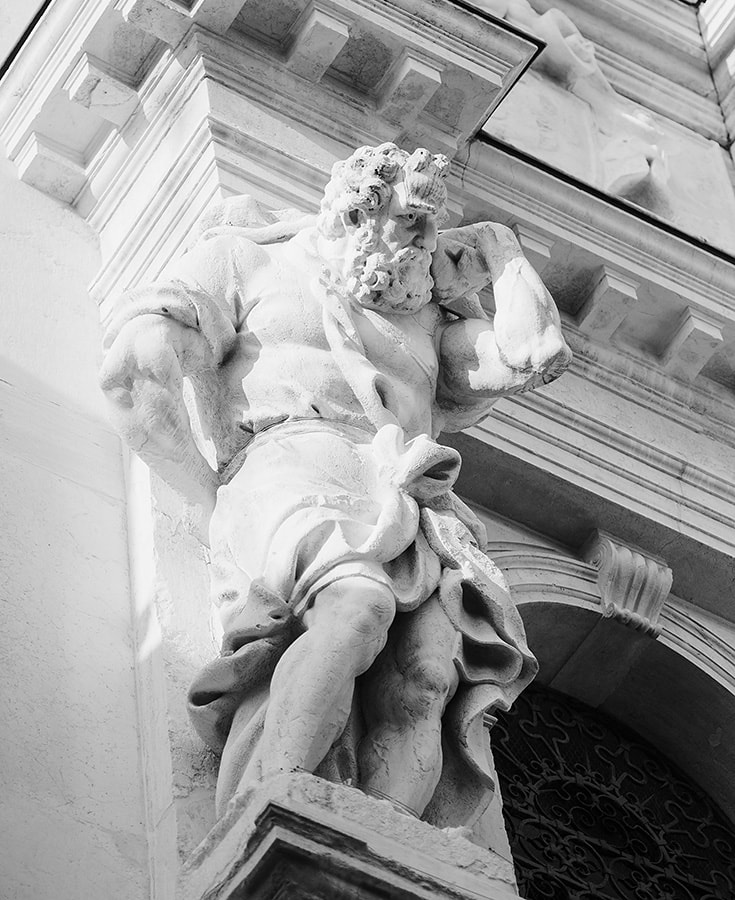 Inside the church, beautifully decorated with paintings, Monica pops a coin into a slot to illuminate Giovanni Bellini’s exquisite Madonna and Saints (1505). In the adjoining Chapel of the Choir, where the nuns’ masses were held, we admire Tintoretto’s Birth of St John the Baptist. And beside it, the smaller Cappella di San Tarasio, currently being restored. We head down into a 9th century sinking crypt (it’s partly underwater when we visit) where eight of the first doges are buried.

While there are a lot of places for prayer, Monica reveals that the nuns weren’t as innocent as we might expect: the convent became notorious for its wild parties during the height of the 18th and 19th centuries carnivals when the nun’s rich boyfriends would sneak in. Back out on the square, Monica points out a plaque on the wall telling people not to play cards or ball games, don’t blaspheme, and to be respectful. “Plaques tell a lot about a place,” Monica says, “What they say not to do was probably what people were doing!” 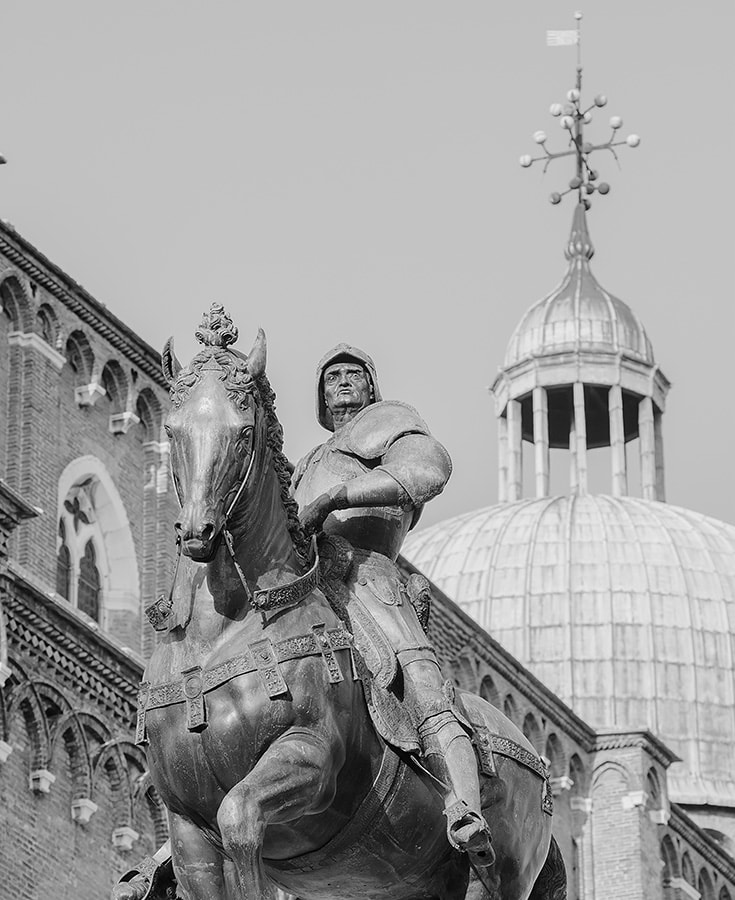 Next we stroll to the Ponte dei Greci (Bridge of Greeks), where we find a young Greek bride posing for her wedding photos with a cigarette in mouth, and San Giorgio degli Greci, the Greek church. Monica reminds us that the Venetians controlled many Greek islands and the Eastern Adriatic, now Croatia and Montenegro – a main interest being the white Istrian stone, a non-porous material essential for construction in Venice.

Salt and spices were also vital to the Venetians, Monica explains, which they depended upon from Middle Eastern traders. The Germans came to Venice to trade cloth and metal. The Jews were also important traders, which is why they were treated so well in Venice, and given the area that became known as the Ghetto. Venice welcomed all of these people and was tolerant of their cultures and religions because it was their trade which made the State rich. 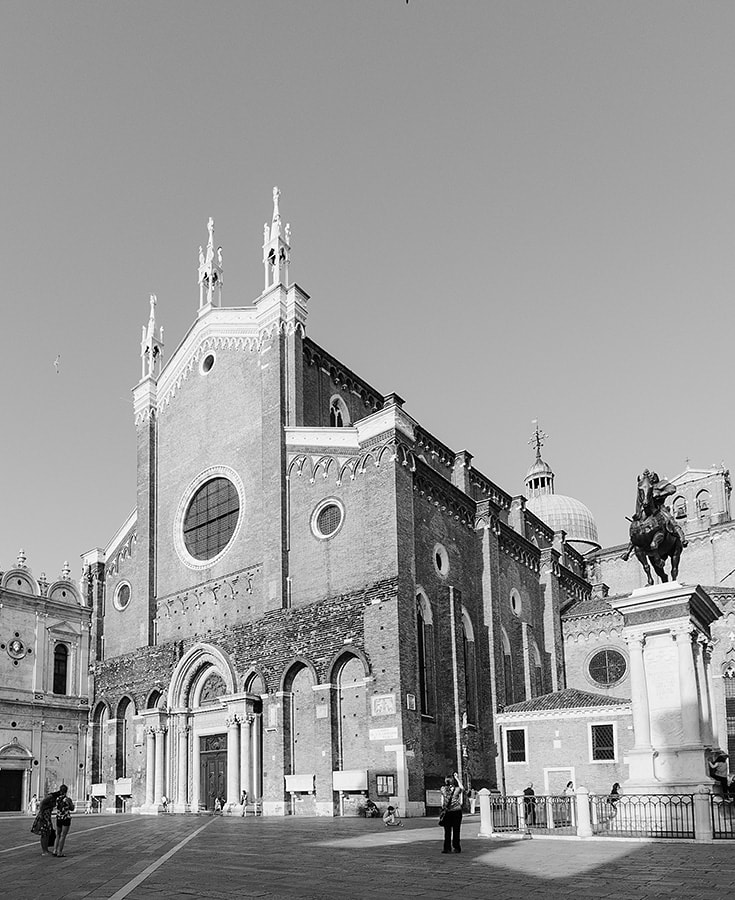 We wander over to the Scuola Dalmata delli Santi Giorgio e Triffon with its recently restored ceiling and stunning series of 16th century paintings by Carpaccio. Monica talks us through each one, from St George slaying the dragon in Libya through to St Jerome taming the lions – all featuring exotic-looking characters in turbans and flowing gowns – to the last painting of St Augustine, a theologian and scholar who sits writing at his desk.

“Look at the shell used for shaving down parchment, the messy desk with books everywhere, just like any academics, and the music sheet in the corner… all of these are important,” Monica says, “They tell us St Augustine was a product of new Renaissance technology: for instance, the music sheet was produced from moveable type which had just been invented, and the tiny text was only possible because glasses had been invented in Murano. I love this painting as much for what it tells us about the time in which Carpaccio painted it as for the painting itself.” 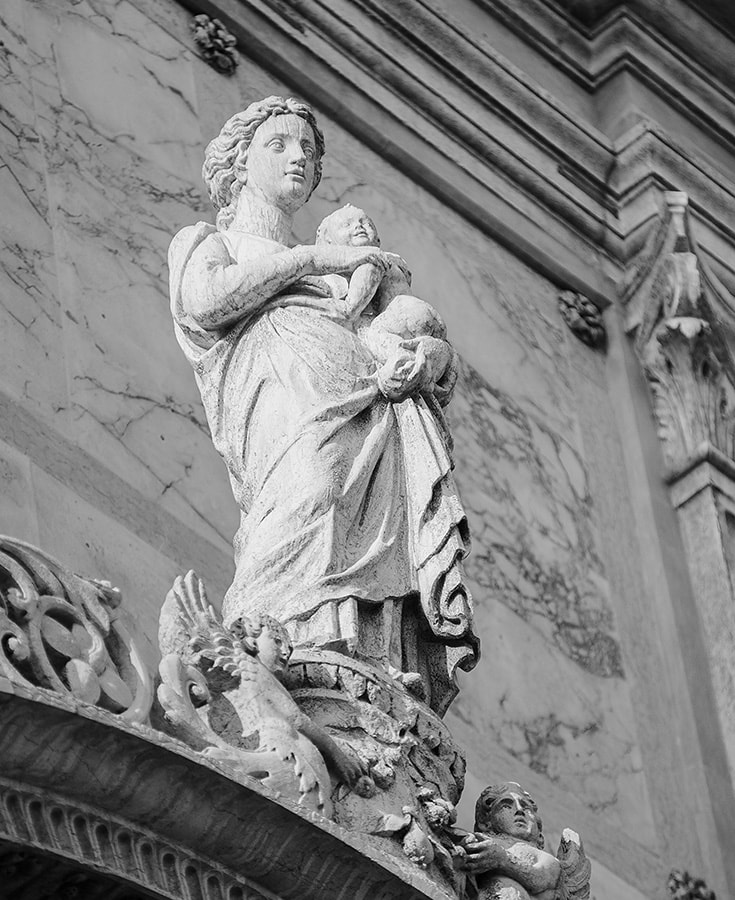 We conclude our walk a short distance away at a plaque outside a Foundling Home (orphanage), where infants, both legitimate and illegitimate, were left, another example of a social institution set up by the State to maintain order. The plaque warns that parents who leave their children who can afford to raise them, will be held responsible.

“Whether it was rich or poor, East and West, Venice would always find a way to solve problem, to maintain social order, and to find a balance,” Monica says, “It’s another example of how Venice, since the Renaissance, has always been very forward-thinking, and very pragmatic.”

Tips to ‘reading’ Venice while walking the city