Cooking with the Countess in Venice should be at the top of your Venice to-do list. A full day spent shopping Rialto markets, doing a Veneto wine tasting, and cooking and eating in the home of Countess Enrica Rocca could just become the most memorable thing you do in Venice.

“Is there anything we should know beforehand about the cooking course?” we asked our host Enrica Rocca. “Yes, you need to cancel your dinner reservation after the class!” Done. When you’re about to spend a day cooking with the Countess in Venice, you do as you’re told.

If you read our earlier post on eating in Venice, you’d know that we’re pretty keen to disprove the view that Venice doesn’t have any good food. Someone who is also dedicated full-time to busting that myth is Enrica Rocca, otherwise known as ‘the cooking countess’.

Enrica started running cooking classes to make a living when, as she admits, she didn’t even know ten recipes. She quickly learned. Enrica now runs cooking classes from her Dorsoduro home unlike any we’ve ever done before. And that’s a compliment.

We meet Enrica and three other participants students at the Rialto Bridge and after some quick introductions head to a local café where Enrica tells us a little about her course and what we should expect.

“I can’t give you a few recipes and expect that all of a sudden you will be able to cook,” Enrica tells the group. “Instead, what I do is teach you about the ingredients, show you where and how to buy them, and teach you how to treat the produce.” 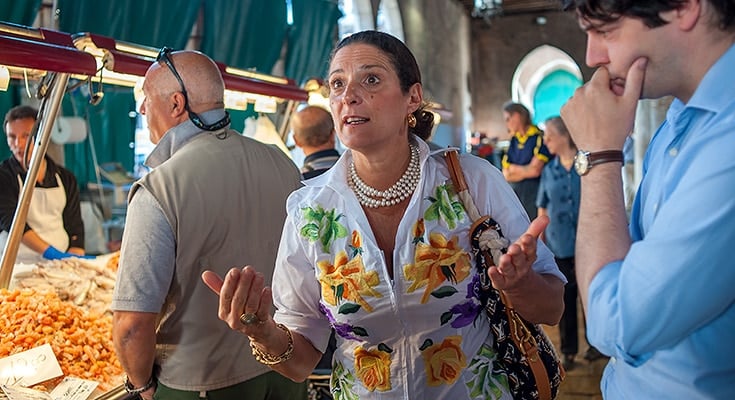 Enrica asks us what we’d like to cook – just seafood, or seafood and meat dishes? We’re all keen to cook both – ‘we’ being an American expat couple living in Russia, a droll Hugh Grant-ish English art dealer spending the spring in Venice, and Lara and I. Enrica appears to relish the fact we’ve chosen to mix it up. Espressos downed, we head off to the Rialto Markets where Enrica gets busy.

A whole mullet, tiny shrimps, prawns, clams, some tuna, and scallops in their shell are quickly procured. Enrica is admiring some seppia (cuttlefish) when a local restaurateur she knows chimes in: “The seppia… well, they’re as rare to find as a virgin in Venice, but they’re still delicious.”

Next we hit the vegetable section of the markets for some seasonal produce such as the beautiful San Erasmo Island artichokes and stop at the butchers to procure some pork ribs and sausages. 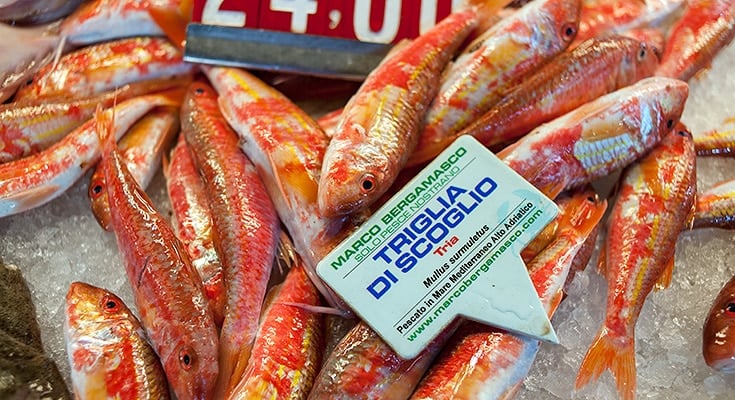 That done, we cross over the Rialto Bridge where Enrica introduces her class to the time-old Venetian tradition of heading to a local bacari (Venetian bar) for a post-shopping spritz: Aperol (an aperitif), prosecco (sparkling Italian wine), a dash of soda, ice cubes, and a half-slice of orange.

As we sip our oh-so-Venetian aperitif we get a quick introduction to the wines of the Veneto from Lorenzo, owner of the wonderful wine shop, MilleVini, across the lane.

Spirits buoyed and tongues loosened by our morning sip, we stroll back to Enrica’s light-filled loft-like home in the Dorsoduro area where we are gobsmacked at her kitchen with its massive prep area and seating around a kitchen ‘island’. It’s a stunning space in which to prepare food and demonstrate cooking techniques, and we’re all obviously excited about what lies ahead…

After being given my ration of prosecco, I was quickly put to work coating the gamberetti (tiny shrimps) with flour and quickly frying them in oil. This is one of our favourite treats at Antiche Carampane where they serve them in brown paper cones.

“They’re like healthy crisps,” Enrica says, much to the delight of Lara, who is busy occupying herself with prosecco-tasting and note-taking. While eating these tasty treats, though, the last thing we’re thinking about is our health! More prosecco, please! 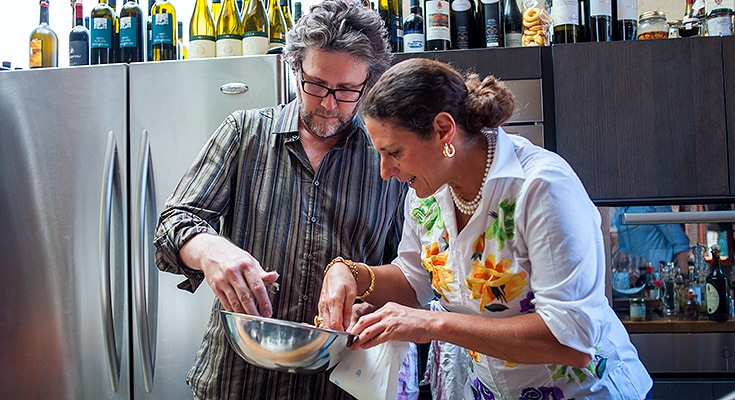 Other guests are put to work preparing the various ingredients, while I’m tasked with slicing the tuna to make sashimi-style raw fish that we drizzle with olive oil. While we cook, we feast on this – sublime! – and some local shrimps, gamberi sgusciati, which we also eat raw.

Venice’s cuisine has involved the use of exotic spices throughout its history, as Enrica earlier showed us at Drogheria Mascaria, the best spice shop in Venice, at the Rialto Markets. So Enrica enlivens the scallops with some freshly-sliced ginger before baking them. We each gobble one down (they’re enormous!), but everyone could have eaten a couple each, they were so delicious. But there’s still plenty more to come. 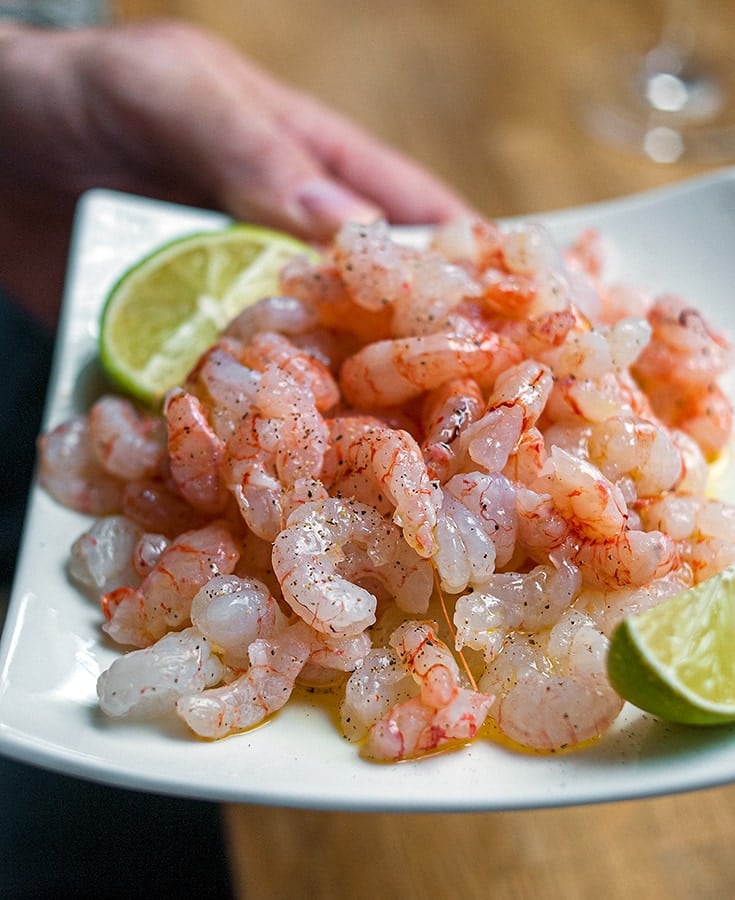 Many restaurants serve spaghetti con vongole (spaghetti and clams) with the clams in their shells – partially to let guests know that they haven’t just bought frozen clam meat.

Enrica complains that the spaghetti is often cold before you’ve managed to get the clams out of the shells so she cooks the clams beforehand and removes them from the shell. It’s a simple tip, but practical cooking advice that makes sense. 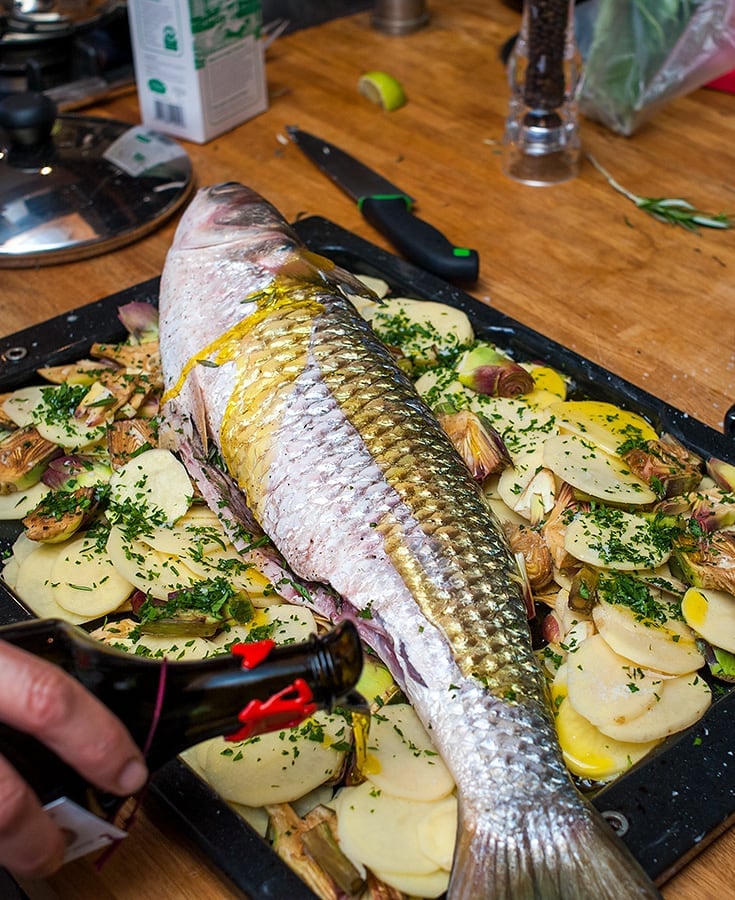 We make the sauce with fresh cherry tomatoes, white wine, a little peperoncino (dried chillies), and parsley, and eat it as soon as it’s ready, and it’s all wonderful. Enrica suggests it goes equally well with mussels as clams.

Next, we sear the pork over high heat.

“It needs to be really brown to get the full flavour you want,” Enrica advises.

While this is going, she has us prepare the whole fish: we fill the gutted cavity with a mix of herbs, and place the artichokes and potato slices around the baking tray before spreading a very liberal dash of olive oil over all the ingredients. The fish in the oven, we add the sausages to the pork followed by plenty of water.

It’s a lot of food to eat and a lot of cooking but we’re working off the calories as we go. As Enrica says “That’s the theme of the day… too much of everything, and unless someone gives us proof that we’re coming back, I’m not moderating.” She’s true to her word.

The fish and pork dishes are both heavenly, succulent and favoursome, and as the wine and conversation flows, Enrica brings out some dessert wine and Venice’s lovely vanilla-flavoured biscuits to dunk in the wine for a sweet ending to the meal. The wine and the biscuits are a marriage made somewhere special. 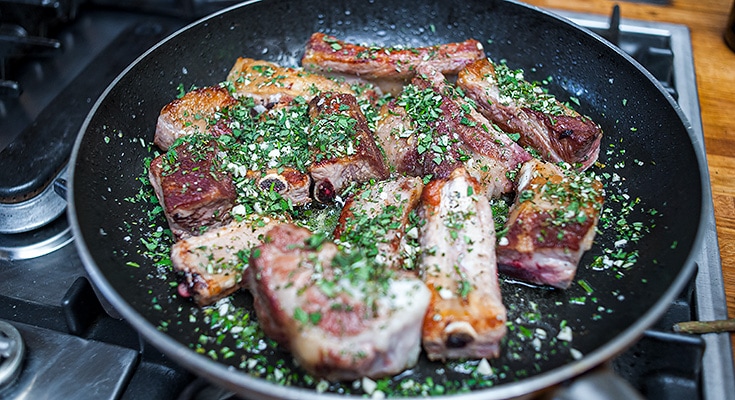 “Balance. Balance is the greatest word on the planet,” Enrica says. “Life is all about balance. Food and wine; work hard, play hard.”

Sometimes a formal, rigid course is the best way to get under the skin of a cuisine, but Enrica’s course is the complete opposite. The day was as much about the Venetian attitude to cooking, drinking and eating, and the Venetian lifestyle and culture, as it was about treating produce, measuring ingredients, and noting cooking times.

We had a blast, but Enrica’s style of teaching won’t suit everyone, and she admits it, having had the occasional guest too rigid to enjoy a day cooking, drinking and eating while exchanging ideas about food, love, life, and the universe.

“Too many people take cooking too seriously,” Enrica says. “Cooking should be fun.”

She’s right, but that doesn’t mean that our day spent cooking with the countess didn’t have an impact.

A few days later I find myself returning to the butcher’s shop to buy some pork and sausages to replicate her lovely pork dish. Is there a better compliment for a cooking course than that?