Our favourite restaurant in Venice, Antiche Carampane, has a warning sign outside so you know what kind of restaurant it is: “No pizza, no lasagne, no menù turistico“. Here’s why we love this special eatery, secreted down a hard to find lane in San Polo.

No Pizza, No Lasagne, No Tourist Menu: Our Favourite Venice Restaurant

Hidden down a hard-to-find lane in the sestiere or neighbourhood of San Polo, the restaurant’s location is such that there is little chance that overheated, foot-weary visitors to Venice will find this lovely little spot, let alone be asking for any of the three items mentioned.

For those hungry lost souls who somehow end up in the dead end, the ‘No pizza, no lasagne, no tourist menu’ sign is sure to have them turn around and go back the way from which they came.

While that may not be entirely the intention, the often-repeated over-simplifications that “Venetian food is bad” or “Venice doesn’t have any decent restaurants” is pervasive enough for owners Francesco and his all-seeing mother Piera, and their friendly team, to post the declaration of war against the bland, pan-Italian slop that passes for food at some tourist-centric restaurants in the city. 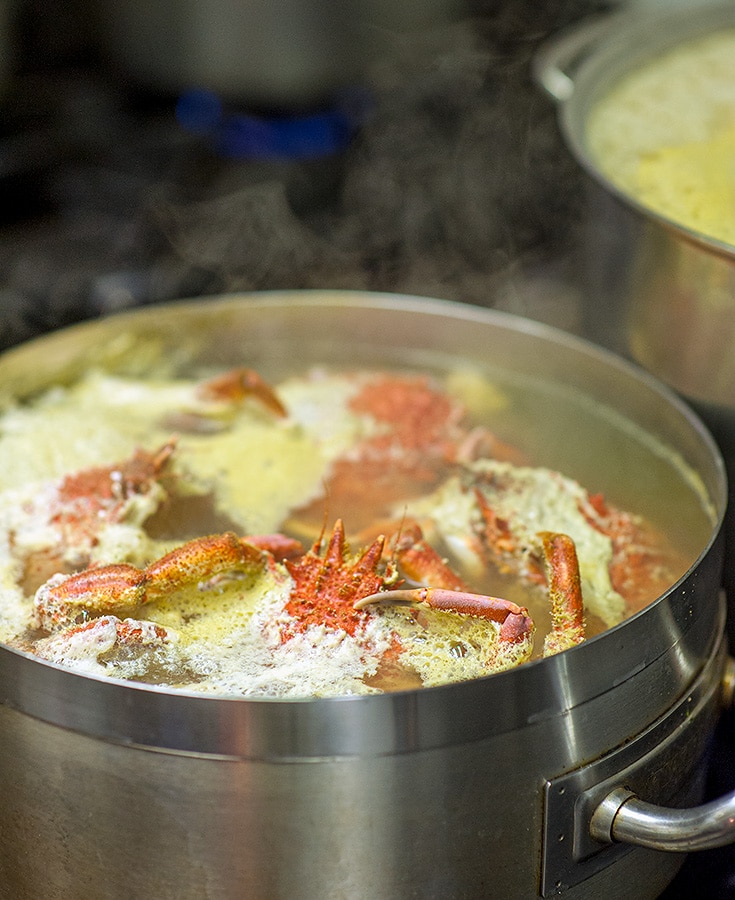 Venice also has some gems, and while it appears that travel and food writers are just waking up to that fact, we’ve been quietly enjoying Venetian food for the 12 years we’ve been visiting the city.

On many an occasion we’ve forced a smile when someone has said that Venice is enchanting, but the food is appalling. How wrong they are.

Antiche Carampane is not alone in serving up superb Venetian cuisine, based on fresh seasonal produce, in an atmospheric setting. And with a characteristically Venetian attitude to hospitality that is warm and welcoming, attentive yet relaxed, and always passionate and informed.

But there is something about the way that Antiche Carampane operates that best exemplifies what makes Venetian restaurants and their cuisine so special. 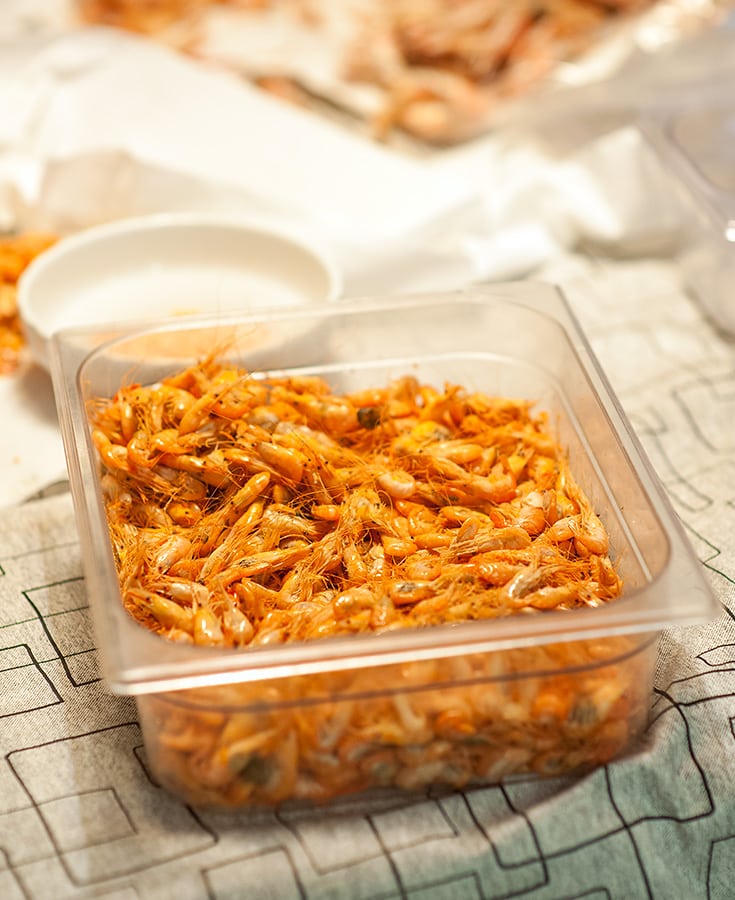 So when owner Francesco invited us to Rialto markets with he and his chefs, and to return to the restaurant to see how they prepare for the day ahead, we couldn’t resist.

We meet Francesco and his chefs Lele and Adriano, who have been with the restaurant for 20 years and 15 years respectively, at the pescheria (fish market) at Rialto one morning.

Each day they head here to seek out the best seafood that the fishmongers have bought from the wholesale market at Tronchetto at 4am that morning. This, of course, excludes Sunday and Monday when the market is closed – so if you find a place that’s selling seafood on a Monday in Venice remember that the fish you’re eating is at least three days old. Don’t eat seafood in restaurants on a Monday is the tip you’ll get from every local chef for good reason.

Francesco has his favourite fishmongers, Marco and Luca, who know exactly what he and his chefs are looking for – and it’s not just intuition. These guys eat at Antiche Carampane nearly every day for lunch, so they’re not going to sell Francesco inferior seafood. 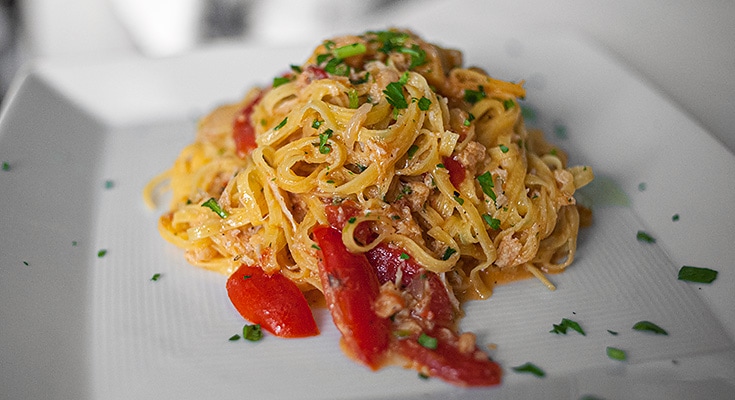 Marco specialises in seafood that is 100% local, coming from the Venetian lagoon or Adriatic, while Luca buys in the best quality seafood from other parts of Italy, the Mediterranean and Northern Atlantic.

These days one of Venice’s signature dishes, spaghetti con vongole (spaghetti with clams), no longer appears on Francesco’s menu. He explains that there have been problems certifying exactly where the clams are coming from in the lagoon and fishermen have been caught harvesting them from contaminated waters near the industrial area. Rumour has is that after a fisherman caught with a haul was given the option of eating the clams or paying the fine, he opted for the latter.

Francesco smiles and shakes his head after telling us the story: “I’m not going to serve them if I can’t be sure where they’ve come from – my kids eat at my restaurant.”

On the morning we visit the markets with Francesco, he suggests we also buy our seafood for the days ahead as the fishermen are going on strike the next day to protest European Union moves to ban the fishing of the tiny prawns and little crabs that the Venetians love so much. It’s a move that Venetian-born Francesco opposes.

“We’ve been eating these for centuries. We know when to fish for them and when not to,” Francesco tells us. “Brussels can’t tell us to change our culinary traditions.”

Indeed, the fritto misto or frittura mista (fried seafood) is one of the finest and most fun dishes on his menu. The miniscule portions of deep fried seafood are served at the table take-away style, wrapped in a brown paper cone to absorb the oil from cooking, with the cone also serving as a container for the crunchy treats. Antiche Carampane has been serving it this way for decades, long before it became fashionable in other parts of the world.

At their favourite seafood merchants stall, Francesco discusses with Marco and Luca about what they’ve got for the restaurant that day, based on the order Francesco’s team had placed, and decide together what else they should buy, based on what looks good. Francesco presses the whole fish with his fingers.

We know how to tell how fresh fish are by the clarity of their eyes, and in Jerez we learned how to also look at the colour of the gills (they should be bright red), but Francesco also recommends we press the fish a little with our fingers: it should be quite firm but a little bouncy, yet not quite spongy. Definitely not soft nor hard.

When Francesco and his guys have everything they need, we do a quick trip to the vegetable section of the market where we observe that asparagus and artichokes are very much in season. Then we have a quick espresso at Francesco’s favourite stand-up coffee bar, and it’s back to the restaurant where the laborious task of cleaning, cooking and shelling seafood begins.

At the restaurant, on one burner in the kitchen, a pot of wonderfully aromatic fish brodo (stock) is well underway.

“It’s made fresh every day,” Francesco tells us proudly with a big smile.

Crabs are boiling on the stove too, their meat to be extracted after they have cooled down. More seafood is cooling down on the wooden benches. Indeed, every available space in the restaurant is covered in seafood that was in the ocean less than a dozen hours earlier.

In the compact kitchen, Adriano and Lele, with the help of Islam, who has been on the crew for five years, are filleting and portioning tuna, among other fish, with one eye each watching the pots. Pastry chef Fabrizio, a fairly new recruit from Puglia, is making desserts that will hit the table in a couple of hours time.

Around a communal table by the bar, Piera and waiter Kiko sit shelling mountains of crustaceans – from time to time they’re joined by Francesco and other members of the kitchen team, who’ll shell some too before remembering another task that needs their attention. Anyone who doesn’t have anything to do at a particular moment will sit down to help clean and peel. 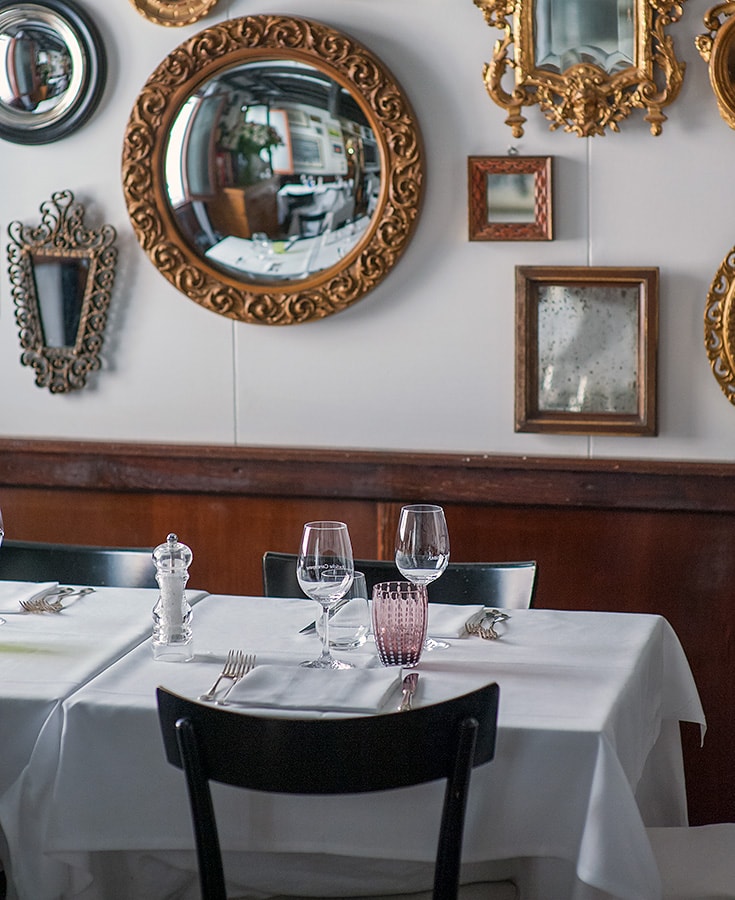 And while they work they chat. And they do this every morning. You don’t get bored of each other’s company, we ask?

“It’s better than being in an office,” says Kiko, a young Al Pacino lookalike, but with a greater tendency to smile than smirk. “It’s just something we do and we accept it. Friends drop in to say hello. It’s nice.”

When we called into the restaurant when we first arrived in Venice, Kiko remembered us from our meal at the restaurant twelve months earlier – a sign that they care about their customers enough to recall them.

That, and the warmth and friendliness of the team – the moment we arrived that morning we were offered coffee and a seat, although there was little room in the endearingly cluttered space –is what sets Antiche Carampane and other good Venetian restaurants apart from the tourist places along the Rialto waterfront and around Piazza San Marco that give Venice’s dining scene such a bad name.

As the clock ticks closer towards midday, we decide it’s time to get out of the way. The team always seems pushed to be prepped for lunch. The time from when the seafood is delivered to when the first guest arrives never seems enough.

Indeed, the first time we ever came for lunch some years back, the restaurant was crowded and abuzz with diners, yet Pierra greeted us from the same table where she sat shelling shrimps. Yet another sign that they take their seafood seriously.

Quality seafood couldn’t not be intrinsic to what makes Antiche Carampane special. After all, it was opened by the son of a fish wholesaler, Piera’s brother, Giovanni Bortoluzzi, in 1982. Just like Giovanni, who gave up a bank job to open the restaurant, Francesco gave up a nautical career to help his mother run the place after Giovanni died and she took over. We ask Francesco what he thinks the family’s secret is to running a great restaurant.

“My grandmother was a great cook and many of the recipes we use here were her recipes. They are very traditional Venetian recipes. Giovanni was also one of the most knowledgeable men around when it came to seafood, and Lele worked with Giovanni…,” Franceso explains.

“But…” he says, smiling, and shrugging his shoulders in that typical Venetian way. “We just love good food and wine.”