This Burmese Indian style chicken curry recipe makes a rich curry fragrant with ginger, turmeric, garlic and chilli that has a homemade Burmese curry powder on its concise list of ingredients. It’s the perfect accompaniment to Burmese coconut rice and the refreshing salads of Myanmar that provide contrasting textures and flavours, such as the Burmese raw cabbage salad.

I’ve adapted this wonderful Burmese Indian style chicken curry recipe from a precious little cookbook I picked up from one of my favourite secondhand Yangon bookstores some years ago. It feels like the old primary school textbooks we used in the Seventies and is so fragile with its soft cardboard cover and lightweight paper stock, I try to avoid taking it anywhere near the kitchen.

Dating to 1978, this charming Burmese cookbook is by Mi Mi Khaing and it’s called Cook and Entertain the Burmese Way, and I’ve mentioned it in previous posts as being a real pleasure to read, as much for its insights into Burmese home-cooking and entertaining in the 1970s as for Mi Mi Khaing’s delightful turn of phrase.

The book has become very precious to me this year. I never used to worry about it, as it was so easy to hop on a plane from Siem Reap to Bangkok and then jump onto another to Yangon – you could get an e-visa online in a couple of hours at most – but since the coup early this year, who knows when we’ll get to return to Myanmar.

This Burmese Indian style chicken curry recipe is next in our series of recipes from Myanmar intended to draw attention to the tragic situation in the country, because, infuriatingly, events in Myanmar have largely disappeared from the pages of most mainstream news publications.

If you’re not aware, in February a coup d’état ousted Myanmar’s democratically elected government, which inspired a nationwide civil disobedience movement, to which the military responded with extraordinary brutality, violence against peaceful protestors, raids on homes and abduction of activists, massacres in the streets, and airstrikes on villages, resulting in thousands of deaths of innocent civilians, including frontline workers.

Now let me tell you about this Burmese Indian style chicken curry recipe.

Not necessarily that she included curry powder – curry powder is used widely across Southeast Asia, as well as East Asia – but her inclusion of curry powder in her Indian style Burmese curry, knowing how Indian cooks feel about curry powder.

Salt, turmeric, ginger, garlic, chilli, and onions feature in both Burmese curries. The main differences between the two curries is that the Burmese chicken curry also has ground lemongrass, tomatoes and fish sauce, while the Indian style curry has bay leaves and curry powder. 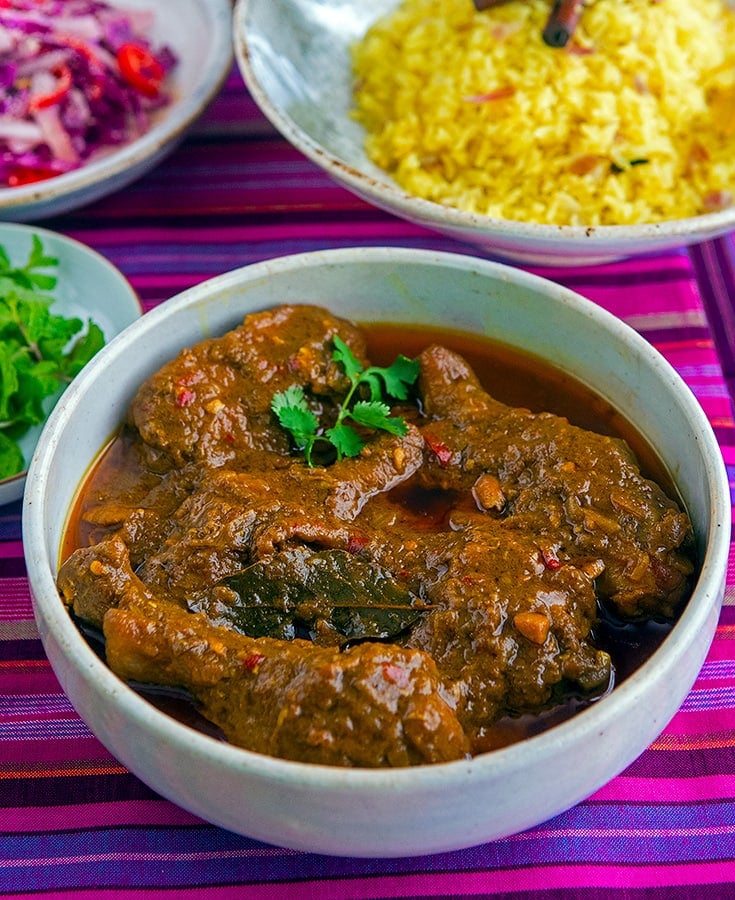 While there’s no shame in using store-bought curry powder in Myanmar – just as there isn’t elsewhere in Southeast Asia – Mi Mi Khaing explains that because curry powders (and spice blends more generally) don’t stay fresh for long, most home cooks blend their own.

Mi Mi Khaing writes: “…a Burmese housewife without a reliable source of readymade powder makes her own, roasting, pounding, and sieving the seeds and mixing them in different proportions to suit different needs.”

Creating my own curry powder has been on my to-do list for a long time, so this is a good excuse to experiment. I’ll share Mi Mi Khaing’s preferred curry powder blend in my next post, and then my own curry powder when I have a blend I’m happy with. Now for a few tips to making this Burmese Indian style chicken curry recipe.

This Burmese Indian style chicken curry is so straightforward, we only have a few tips, starting with what to cook your curry in. While a lot of curry recipes simply call for ‘pots’, we usually use either a big flat round bottomed wok or a Dutch oven. You could also use a big deep frying pan or skillet.

Make sure to rub the chicken pieces with salt, turmeric and ginger as it noticeably adds flavour to the chicken meat. Mi Mi Khaing’s original Indian style Burmese curry called for ground ginger and turmeric.

While Burmese curries, like Indian curries, use more dried spices compared to other northern Southeast Asian curries, we always keep fresh ginger in the fridge, so we used that instead. You could do the same without too much damage.

Cooking some of the chopped onions first until brown ultimately creates a layer of soft silky onions which add depth to the dish – just like in the Moroccan chicken tagine recipe we just published. 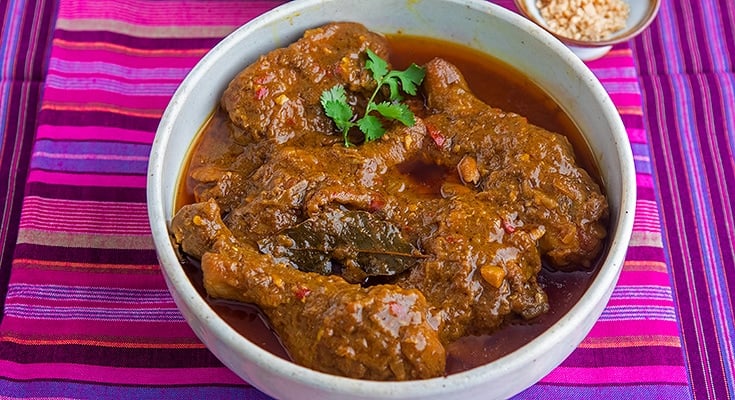 Mi Mi Khaing uses a homemade curry powder blend, as most Burmese women do, which includes cumin, cinnamon, cardamom, cloves, coriander, peppercorns, bay leaf, and poppy seeds. We’ve shared her full curry powder recipe here, with a couple of tweaks, but you could use a store-bought curry powder.

Cooking the chicken pieces with the spices in a covered pot is crucial to keep the chicken moist and tender, but for the final stage you need to remove the lid so that the sauce can really reduce. Keep an eye on it.

If you find that you’ve allowed the sauce to reduce too much and need to add more water than Khaing adds – though you probably won’t – note that this will also reduce the depth and intensity of the spices. You may want to add more curry powder.

Serve this Burmese Indian style chicken curry with the wonderful Burmese coconut rice we recently shared, a relish or two (recipes coming), and light refreshing salads to provide that much-needed contrasting texture and flavour that the Burmese love so much, such as the crunchy Burmese raw cabbage salad and sweet and juicy Shan tomato salad we recently shared. Links to all recipes earlier in this post.

Please do let us know in the comments below if you make this Burmese Indian style chicken curry recipe as we’d love to know how it turns out for you.de