This ohn no khao swe recipe for Myanmar’s beloved Burmese chicken coconut noodle soup, a distant relation to Chiang Mai’s khao soi, is one that Terence has been making since we first became enamoured with the dish in Yangon on our first trip to the country.

Our ohn no khao swe recipe for Myanmar’s much-loved coconut chicken noodle soup – probably the most popular dish alongside mohinga – combines the best of the many renditions Terence and I sampled on our Myanmar travels, starting with the first ohn no khao swe we savoured at Yangon’s grand old hotel, The Strand. 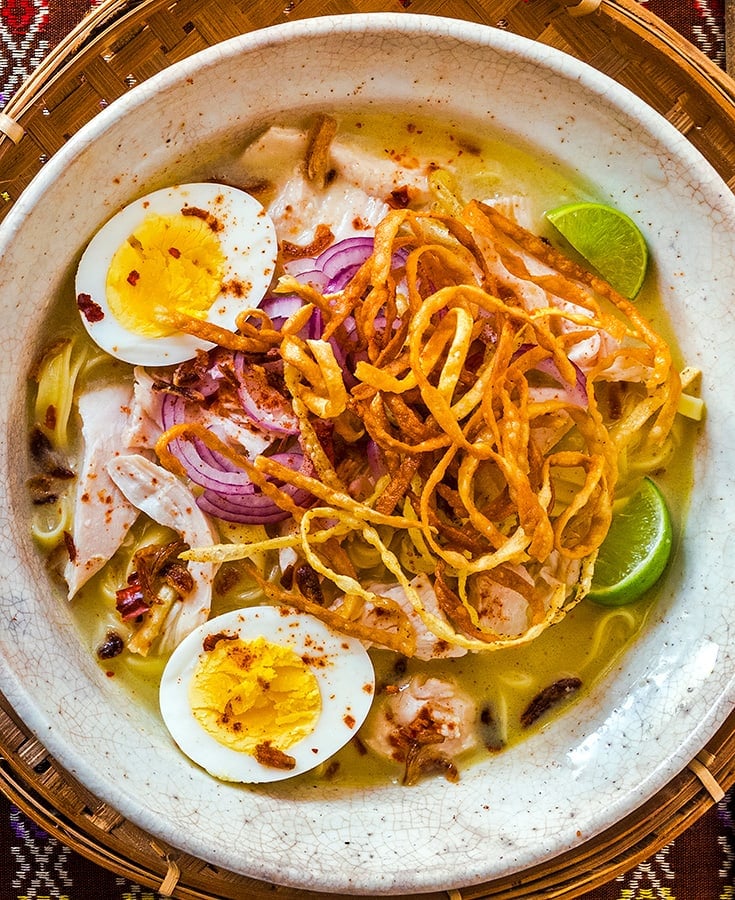 Ohn no khao swe is generally considered to be a street food dish, offered by roving vendors and available from markets and roadside stalls, although these days you’ll also see it on menus everywhere from simple family-ran eateries and cafés to hotel all-day-dining restaurants and shopping mall food courts.

In A Taste of Shan, published in 2009, cookbook writer Page Bingham files her Shan hkauk swe recipe, a distinctly Shan style variation on this ohn no khao swe recipe made with rice noodles instead of egg noodles, and garnish of peanuts and sesame seeds, and coriander, in a separate section devoted to street food to distinguish it from home-cooked food.

Bingham acknowledges that she tried at least two dozen variations of Shan hkauk swe during her year in Myanmar researching Shan cuisine and culinary culture in the home of the ethnic minority people, the Shan State, bordering China, Laos and Thailand.

In Twilight Over Burma, author Inge Sargent, who became a Shan princess after marrying the Shan Prince of Hsipaw, describes her local Bawgyo market in the mid 1950s: “Next was a row of restaurants with freshly prepared foods of every ethnic group represented at Bawgyo. Pots of steaming Chinese noodles competed with panthe khowsoi, and Shan rice noodles with chicken and coconut curry sauce.”

It might seem strange then that ohn no khao swe is often called a Burmese rather than Shan chicken coconut noodle soup – until you learn a little bit more about its history and what a well travelled dish it is. While this is a Burmese-Myanmar dish, it has relations in neighbouring countries, India, Thailand and China.

In Cook and Entertain the Burmese Way, published in 1978, author Mi Mi Khaing includes her ohn no khao swe recipe in a chapter titled Eating Out and One-Dish Meals. Khaing, who was of the Mon ethnic group, also married a royal from the Shan States, and was one of the first scholars and authors to write in English about her culture and cuisine.

In the chapter introduction she describes how “from sleek cars drawn up at roadside counters, dainty and bejewelled women get out to eat”, how dishes were “sold in streets by male hawkers with shoulder poles and two loads. One load holds the fire and main pot; the other, some accompaniments, dishes, and a wash basin” and “female hawkers carrying food more gracefully on their heads”.

Khaing writes that the vast majority of food shops – “restaurants, open air booths, pavement tables, lean-to counters, parked trolleys” – mostly sold Chinese food, because that’s what people wanted to eat when they went out. She wasn’t suggesting her ohn no khao swe recipe was Chinese, although there is a Chinese and specifically Yunnan connection, which I’ll explain in another post – along with the relationship to Thailand’s khao soi from Chiang Mai.

Rather, Khaing was suggesting that her chicken coconut noodle soup recipe was one of a handful of Burmese dishes cooked in a big batch when a hostess needed to feed many people coming and going over several “non-rice” hours, typically invited over for breakfast, lunch or “tea time” (that’s the British influence).

She goes on to describe the “festivity because with such dishes guests do the final mixing with small accompaniments to their individual tastes”. Indeed, garnishing your ohn no khao swe – assuming you have an array of accompaniments provided – is one of the most fun bits about eating this Burmese chicken coconut noodle soup, just as customising your one-dish meals is elsewhere when footpath feasting on street food in Southeast Asia.

Of course, you need to start with a delicious bowl of curried coconut noodles in the first place and that’s exactly what Terence’s ohn no khao swè recipe makes.

*Chickpeas are the same as garbanzo beans. If you can’t find flour, you can grind the beans in a mortar and pestle, then finish by grinding finely in a coffee bean grinder.
**To make fried noodles, if you have fresh noodles, cook and dry them for a couple of minutes. Heat vegetable oil in a small pan up to 180˚C and carefully drop the noodles in. Swirl around until golden brown. Drain and transfer to a plate lined with kitchen paper.

If you do make Terence’s ohn no khao swè recipe we’d love to hear how it turned out in the comments below.