This homemade taramosalata recipe for a Greek style tarama dip made with red caviar or fish roe is so quick and easy you’ll never buy a supermarket dip again. We’ve used an affordable red lumpfish roe but you could use a more expensive red caviar or red salmon roe, or cod roe for the creamy colour of the more traditional Greek meze dish.

Like my recipes for cheese straws, smoked salmon dip, olive tapenade, and French onion dip made from scratch, this homemade taramosalata recipe appears to be part of a nostalgic project to recreate the dips and spreads popular in Australia in the 1970s, ’80s and ’90s that I’ve been missing.

If you’re not familiar with this delicious Greek dip or spread, taramosalata is made from tarama, salted and cured roe (fish eggs). The roe is whipped with lemon juice, olive oil and bread or mashed potatoes, and served as a meze, a snack or appetiser, or as part of a spread of small plates of meze called mezedes (plural), typically eaten with bread and washed down with ouzo or wine in Greece, and Turkey.

Taramosalata dates back to the Byzantine Empire, which is why it’s also found in Turkey – some argue it originated in the capital Constantinople, now Istanbul. It’s also found in other countries in the Balkans, such as Bulgaria and Romania, where it’s called salata de icre – ‘salata’ obviously means salad and ‘icre’ is from the Russian ikra or икра, which means caviar, as in the fish roe and the ‘poor man’s caviar’, a roast vegetable dip.

Also spelt taramasalata in some countries, but more correctly taramosalata (see the Greek to understand why -> ταραμοσαλάτα), it’s often shortened to tarama by waiters in Greece and Turkey. While that can be confusing for some, context is everything when it comes to language; the waiters know you’re not ordering a plate of fish roe.

Despite having eaten pink taramosalata all over Greece, and bought it from Greek delis in Australia for many years before we moved to the Middle East and began travelling to Europe, I’ve called my homemade taramosalata recipe a Greek style tarama rather than Greek tarama to avoid the wrath of the internet food nerds.

This is because this taramosalata recipe calls for red caviar or red lumpfish roe rather than cream coloured cod roe traditionally used in Greece. I also garnish it with a generous dollop of the stuff (that’s my Russian heritage showing), rather than garnishing with Greek olives. More on all of that below.

Now before I tell you more about this homemade taramosalata recipe, I have a favour to ask. Grantourismo is reader-funded. If you’ve enjoyed my Russian family recipes, Cambodian recipes or any of our recipes on the site, please consider supporting Grantourismo by using our links to book accommodation, rent a car or campervan or motorhome, buy travel insurance, or book a tour on Klook or Get Your Guide.

Or you could purchase something on Amazon, such as these James Beard award-winning cookbooks, cookbooks by Australian chefs, classic cookbooks for serious cooks, cookbooks for culinary travellers, travel books to inspire wanderlust, or gifts for Asian food lovers, picnic lovers and travellers who love photography. We may earn a small commission but you won’t pay extra.

Now let me tell you about my homemade taramosalata recipe for a Greek style tarama dip made with red caviar or fish roe.

While I do know the difference between caviar and roe (fish eggs), I know have a tendency to use the term ‘caviar’ or ‘ikra’ in Russian as a kind of catch-all for all kinds of caviar and roe, as that’s how I was raised. My Russian grandmother had a jar of ikra on the dining table for most family meals and everyone simply translated it to ‘caviar’ in English.

However, for Sunday lunches it would be the more affordable lumpfish caviar or, more correctly, lumpfish roe, served with boiled eggs or devilled eggs. For special occasions and holidays, such as Easter, Christmas and New Year, baba would buy a more expensive, sturgeon roe or sturgeon caviar, which is actually the only kind of fish roe that should be called caviar.

Calling for lumpfish roe and a dollop of the stuff as garnish – and you can blame my Russian heritage for that – my taramosalata recipe makes a tarama spread that resembles the dip found in Balkan countries, from Bulgaria to Romania, called salata de icre – ‘salata’ naturally means salad and ‘icre’ is from the Russian ikra or икра, which means caviar.

For a more ‘authentic’ Greek taramosalata, you should garnish with Greek olives. But let’s get back to that issue of ‘authenticity’. My taramosalata recipe makes a more naturally pink iteration of the lurid pink taramosalata that Terence and I used to buy from delicatessens in inner-city Sydney in the 1980s and 90s.

The taramosalata was typically kept under the glass deli counter, alongside enormous buckets of plump Kalamata olives in brine, and big stainless-steel trays of feta cheeses, stuffed capsicums and green peppers, tzatziki, hummus, baba ghanouj, and the like.

They’d scoop the stuff out into takeaway containers and you’d say ‘when’ and buy by weight. We’d always leave with a few dips, juicy olives and pita bread, which we’d graze on for days. Until we discovered Chris’ Homemade Greek Dips, now called Chris’ Foods.

Started in Melbourne by Greek-Australian Christos Tassios in the early 1980s, Chris’ dips were the first commercially-produced dips sold in supermarkets that tasted like the delicious dips we bought in the delis.

Chris’ taramosalata was still very pink – as were the taramosalatas we would eat all over Greece on our first holiday there in the summer of 1999 and on subsequent trips, including research trips when we criss-crossed the country updating the Lonely Planet Greece guidebook.

And the taramosalata wasn’t only pink in tourist destinations, which I recently read a food blogger claim, who seems to be of the view that only the cream-coloured taramosalata, made from cod roe is ‘authentic’, while the pink taramosalata is not, because the roe is dyed. 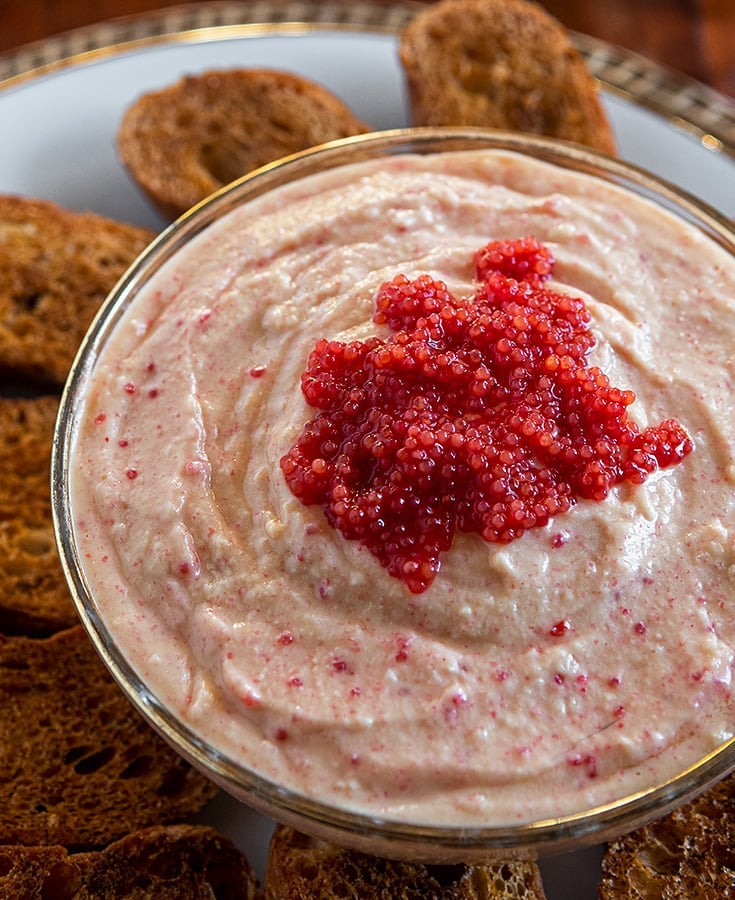 Contrary to what you might read on the web, red fish roe does exist. There’s also yellow, orange, brown, bronze, the black we typically associate with fine caviar, silver-grey and even a metallic blue and green.

Black caviar, which is true caviar, is from sturgeon. This is not used for tamarosalata as it’s so expensive and best appreciated on its own, eaten with a spoon (or off the back of your hand) or with blini or bread.

Red caviar, or more correctly, red roe, along with orange-red and orange roe typically come from salmon, carp, and trout. Whip any of those with lemon juice, olive oil, and white bread or potatoes, and you’ll get a pale pink or pale pinky-orange tamarosalata. Use a higher ratio of roe and the colour will be more vivid.

The roe of lumpfish (Cyclopterus lumpus) is naturally a pale dusky pink colour and it’s sold in both its natural colour as well as being dyed red or black during processing, using EU approved food colours. To check you’re buying a safe approved colour look for an E-number on the label.

Alternatively, look for lumpfish roe brands with ‘AZO-free colours’ on their labels, which means they do not use synthetic colours and either use natural colouring or the natural colour of the roe. You’ll be able to confirm the latter by sight, as the natural colour is dusky pink rather than vivid red or orange-red.

Not only is lumpfish roe more affordable than other kinds of roe and caviar, but its texture, which is a little crunchy, and its taste, which is a tad salty and a teensy bit sweet, with a touch of umami, makes it perfect for taramosalata.

Just a few tips to making my taramosalata recipe. 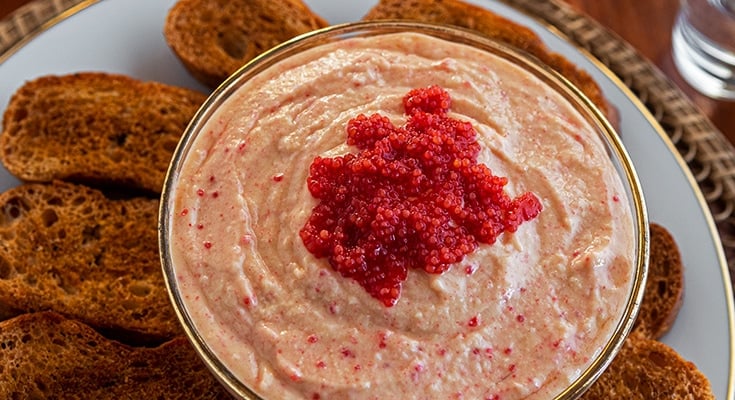 I only have a few quick tips to making my taramosalata recipe as it’s really very easy to make. Although I don’t want to unnecessarily complicate things, these few tips are important, especially if you’ve been researching and comparing recipes.

While my taramosalata recipe calls for red lumpfish roe, as I was trying to recreate that pale pink taramosalata we loved from Sydney in the Eighties as much as Greece in the late Nineties, do feel free to use another kind of roe, such as the cod roe used in Greece, which will give you a beige or cream coloured spread.

Some taramosalata recipes call for bread soaked in water or milk – I found a mix of the two worked best – while other tarama recipes call for mashed potatoes, which is just as traditional and ‘authentic’ as stale white bread.

I prefer the texture of stale bread, which results in a creamier textured dip, and leaving the potatoes for skordalia. I find the texture too dense and not like any taramosalata I’ve eaten in Greece, Turkey or Australia.

I note that some recipes recommend you soak the bread for a couple of minutes. I tested this but my bread dissolved after soaking for for a couple of minutes – this probably says more about the cheap flour generally used in commercial bread in Siem Reap than anything. A short dip and out again was sufficient, and squeezing the liquid out of the bread is essential.

Testing recipes where cookbook authors and food bloggers simply listed a number of slices was unhelpful. Obviously because bread comes in different sized slices and different breads have different levels of density, which is why I’ve provided grams.

Regular readers might find it amusing that my taramosalata recipe recommends you make this in a food processor, as we nearly always recommend a mortar and pestle, but a food processor will get the job done quickly and more easily, as you’ll need to pour the olive oil in slowly for that light, airy, creamy texture.

Now while I do love that texture, I also love a little crunch, which is why my taramosalata recipe suggests setting some fish roe or caviar aside to stir through at the end.

I also prefer my taramosalata to be a little firm, so I can use it as a dip as well as a spread, which is why I recommend refrigerating it overnight.

Please do let us know if you make my homemade taramosalata recipe for a Greek style tarama dip made with red caviar or fish roe in the comments below as we’d love to know how it turns out for you.