Make this homemade French onion dip recipe for a rich, creamy caramelised onion dip that will take you back in time to the dips you helped your mum make for backyard barbecues by stirring French onion soup mix into cream cheese or sour cream. This onion dip recipe makes an even more delicious dip and is worth the little extra effort.

If, like me, you’re yearning for simpler times when pandemics were things of the past you learnt about in history class, when guests were greeted with cheek kisses and bear hugs not elbow bumps and foot taps, and the only people who weren’t doctors who wore surgical masks were actors playing doctors on day-time TV, then make this homemade French onion dip recipe right now.

It was inevitable that I’d get around to doing a homemade French onion dip recipe for a caramelised onion dip made from scratch. After all, the festive season saw me making smoked salmon dip, baking cheese straws and assembling prawn cocktails, and, as regular readers know, I love my retro classics such as devilled eggs, beef Stroganoff and chicken Kiev thanks to my Russian heritage.

But this homemade French onion dip recipe wasn’t a family recipe. When I helped mum prep hors d’oeuvres for weekend get-togethers, backyard barbecues and dinner parties at home in Sydney in the 1970s, the French onion dip that she had me make came from a recipe on the Continental French Onion Soup packet.

All I had to do was combine the dried soup mix with sour cream and cream cheese and as much as I liked dipping my finger in to test the thing, I much preferred sliding olives onto toothpicks, and arranging the pickled onions, cubes of cheddar and cabanossi, and Jatz biscuits and barbecue shapes in mum’s fancy serving platters.

But like the Coolabah wine cask that sat beside the Crock-pot on the kitchen counter, the purple leather bean bags and new colour television in the lounge room, Don Dunstan’s Cookbook, and ABBA, that French onion dip felt so modern. And yet it wasn’t.

I’ll tell you more about that and my homemade French onion dip recipe for an incredibly rich and creamy caramelised onion dip in a moment. Before I do, I have a favour to ask…

Grantourismo is reader-funded. If you’ve enjoyed my Russian family recipes, Cambodian recipes or any of our recipes on the site, please consider supporting Grantourismo by using our links to book accommodation, rent a car or campervan or motorhome, buy travel insurance, or book a tour on Klook or Get Your Guide.

You could also shop our Grantourismo store on Society6 for gifts for foodies, including fun reusable cloth face masks designed with Terence’s images, or consider contributing to our epic Cambodian cuisine history and cookbook on Patreon.

Or you could buy something on Amazon, such as these James Beard award-winning cookbooks, cookbooks by Australian chefs, classic cookbooks for serious cooks, cookbooks for culinary travellers, travel books to inspire wanderlust, or gifts for Asian food lovers, picnic lovers and travellers who love photography. We may earn a small commission with any purchases or bookings on the links above, but you won’t pay extra.

Now let me tell you about this homemade French onion dip recipe for a caramelised onion dip made from scratch.

I created this homemade French onion dip recipe for a creamy-rich caramelised onion dip because I’ve had cravings for that packet-made dip from the Seventies but much prefer to make things from scratch. They just taste so much more delicious, whether it’s a Thai curry paste or Cambodian herb and spice paste – which we prefer to pound in a mortar and pestle to using store-bought pastes, which never taste quite right and are nearly always too salty – to homemade Sriracha and sweet chilli sauce, olive tapenade and creamy hummus, tartare sauce and homemade crackers.

On the back of the Continental French Onion Soup packet was a recipe for French Onion Dip made with the contents and a tub of cream cheese. My Russian-Australian mother added sour cream, because sour cream flows through the veins of Russians. If not sour cream, mayonnaise, which I’ve added to the mix in my recipe.

Interestingly, Continental, which was established in Australia in 1947, introduce its dried soup mixes in 1951, kicking off with chicken noodle soup, at the same time as Swiss brand Maggi, which was already a household name in Australia, due to Maggi seasonings and stock cubes. Neither were new, however…

By the time Maggi products launched in Australia, Maggi had been acquired in 1947 by Nestlé, another pioneering Swiss company, which started out in 1866. Also known the world over, but for its condensed milk, baby food and chocolate, Nestlé was another household name, having established production facilities in Australia in 1914, and launched our beloved Milo in Australia in the 1930s. 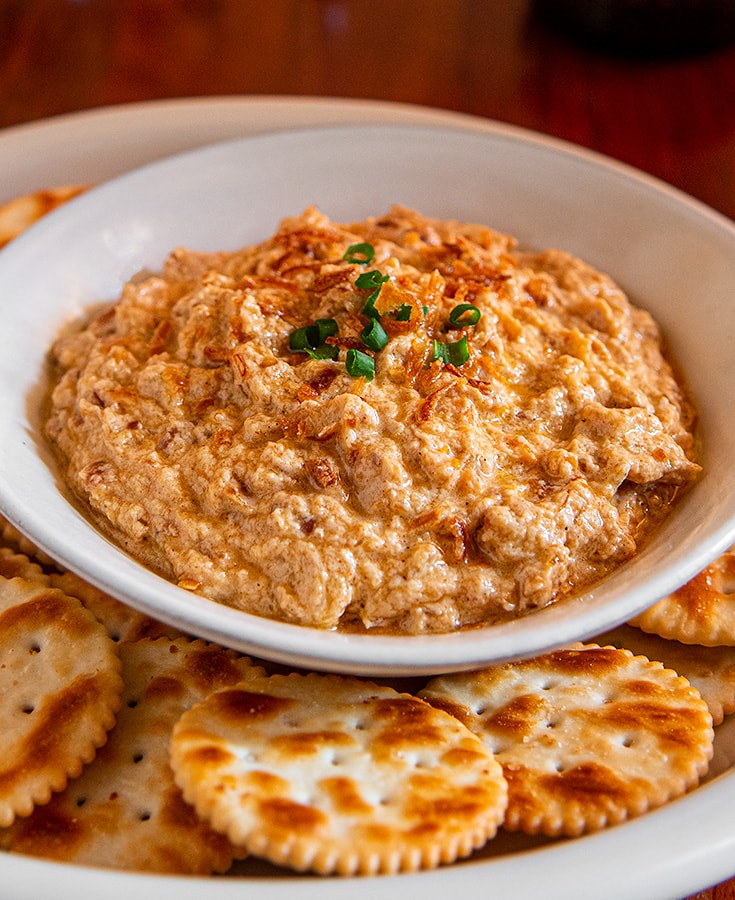 Across the Pacific in the USA, dried onion soup mix had also been around for a while before finally taking off in 1941 when Continental’s onion soup was re-branded as being made by “the Lipton people” – as in global tea brand Lipton, started by Scottish tea merchant Thomas Lipton, who opened his first Lipton shop in Glasgow in 1871.

However, it wasn’t until 1954, soon after the dehydrated soup was relaunched as Lipton Onion Soup that a dip made from the dried soup mix and sour cream was promoted as California Dip. Unlike in Australia and New Zealand, ‘French’ did not appear in the name of the soup mix or dip.

French onion soup and French food generally were very fashionable in Australia in the 1970s (and 1950s and 1960s). My mum made a heavenly French onion soup. My parents also had a French restaurant in the mid-70s. All of which makes me wonder why mum didn’t make a French onion dip from scratch. She could have been making it with her Breville Kitchen Wizz, which sat right next to the Snack’n’Sandwich Maker.

As usual, I only have a few tips to making this homemade French onion dip recipe for a rich and creamy caramelised onion dip. I use our round flat-bottomed carbon steel wok for the onions, as it heats up faster and retains heat better than a fry pan, which means your onions will caramelise faster.

While we think of low, slow cooking when it comes to caramelising onions – and that’s how you should do your onions for a proper French onion soup – for this French onion dip you can speed up the process and still get a great caramelised taste and golden-brown colour by shifting the heat between medium and high.

Keep a close eye on the onions so they brown but don’t burn. When on medium, let the onions sit and sizzle in the oil. Then turn the heat up high and use a wooden spoon or spatula to stir-fry the onions, turning the heat down again to let them sit and sizzle.

Using this method in a carbon steel wok, it will only take you 20 minutes or so, rather than the hours spent slowly caramelising onions in a pot on low heat for French onion soup. 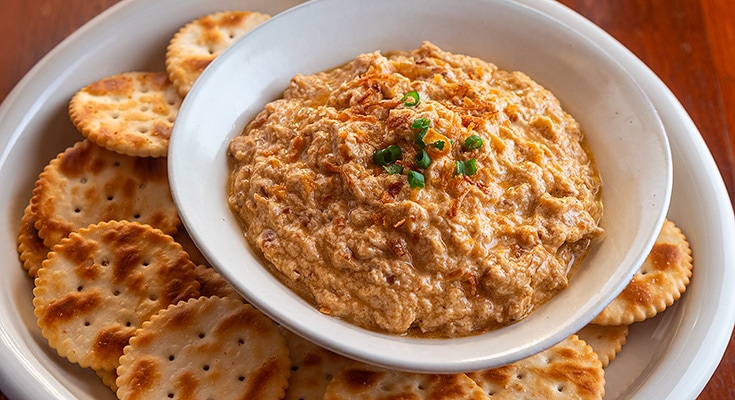 When the onions are just about done, add the sea salt, white pepper, garlic powder, ground paprika and ground star anise, stir well to combine over low heat for another minute or two, then turn off the heat and transfer the onions to a cold dish to allow them to cool, then refrigerate until needed.

If you don’t do a lot of cooking with spices, start with half my suggested measures, taste, and add more little by little to suit your palate. We love intense, complex flavours, but not everybody does.

While we recommend a mortar and pestle for herb and spice pastes, for dips such as this, and the smoked salmon dip I shared a few weeks ago, a food processor will do the job for you.

You could also make your fried shallots from scratch, but store-bought fried shallots will work well, as long as they’re crunchy. You can buy them online (see previous link), if you can’t find them in the Asian section of your supermarket or a specialist Asian grocery store.

Make sure to taste the dip again after whizzing all the ingredients together, and adjust the seasoning/spices to suit your palate if needed. If the flavours are too intense for you, add more sour cream, cream cheese and/or mayonnaise.

Transfer the dip to a bowl and serve immediately with crackers, chips, crudités, or Jatz biscuits for a real nostalgia trip. If you’re making the dip ahead and refrigerating it, take it out an hour or so before serving so it softens, then garnish with a sprinkle of crispy fried shallots and finely sliced scallions/spring onions.

Please do let us know in the comments below if you make our easy cheese straws recipe as we’d love to know how it turns out for you.