Squeezed between the enamel tiffins, stencilled trays, woven baskets, and well-thumbed cookbooks on the shelves in our Siem Reap kitchen are a handful of mortar and pestle sets. This cute new addition to our collection has quickly become my favourite. The KROK mortar and pestle is easily the best mortar and pestle I’ve used. And that’s saying something.

Because after the woks and rice cooker, the mortars and pestles get used the most in our busy little studio kitchen, where we test, cook and shoot the recipes for Grantourismo, as well as the recipes for our epic Cambodian cuisine history and cookbook, and the handful of other cookbooks we’ve been developing.

We’ve got a mortar and pestle for every purpose – from a massive Cambodian wooden pestle (satvalait) and mortar (bayoa) to pound green papaya salads such as Cambodia’s bok lahong and Thai som tam to a flat basalt Javanese mortar (cobek) and hooked pestle (ulekan) to grind dried spices for curries from Indonesia, Myanmar and India.

A mortar and pestle was the first kitchen tool we bought when we rented an apartment in Cambodia’s capital, Phnom Penh, for a month back in 2012, to see if we liked the city enough to call it home. While I was busy editing a travel magazine, Terence learnt to cook the local food and our love affair with Cambodian cuisine began.

While Phnom Penh wasn’t right for us – two months later we were flat-hunting in another capital, Hanoi – that insanely-heavy, rough-hewn, black granite mortar and pestle that Terence bought from the market got packed away with our stuff and stored while we travelled to Vietnam on magazine assignments.

When we moved into an apartment in Cambodia’s riverside city of Siem Reap almost a year later, the mortar and pestle was unpacked and welcomed like an old friend. It was the only Asian cooking utensil we owned at the time, and it took pride of place on the wooden benches we had made for the empty kitchen… until it was joined by a rice cooker.

And now it’s been joined by the KROK – which, incidentally, is the name for the mortar in Thai, and sak is Thai for pestle. So why did we need to add another mortar and pestle to the collection and what makes the KROK the best mortar and pestle?

So let’s be clear: we really didn’t need another mortar and pestle – although I did consider a little Italian marble mortar and pestle, perfect for making basil pesto, which I spotted on our last trip to Phnom Penh – but now that we have the KROK and it’s such a joy to use, I wish we’d had it sooner.

So how did we stumble across this delightful mortar and pestle? The KROK was gifted to us by the makers with an invitation to test it out, and if we loved it, another invitation to join their affiliate programme.

As regular readers know, in the more than 10 years of running Grantourismo we’ve never supported or promoted any products that we haven’t tested out and loved, so we’ve now partnered with KROK and joined their affiliate programme because we’ve fallen in love with the KROK.

Not only is the workmanship beautiful and it’s a delight to hold. It has a super smooth surface – this is no factory-made mortar and pestle – and it’s also super light, thanks to a smaller and shallower ‘bowl’ and a cork base. Which means that it’s probably the only mortar and pestle that will eventually return with us to Australia.

The cork base is an innovation of the makers of the KROK – I’ve never seen this before – and not only does it make the mortar lighter, it grips to the kitchen bench or counter-top, keeping it nice and steady, while ensuring it doesn’t scratch the surface, eliminating the need for it to sit on a tea towel.

And while the ‘bowl’ of the mortar isn’t as massive as that big black granite mortar and pestle we lugged all the way from Phnom Penh, it’s not too far off. It’s large enough to make a batch of spice paste with enough left over for a couple more curries. 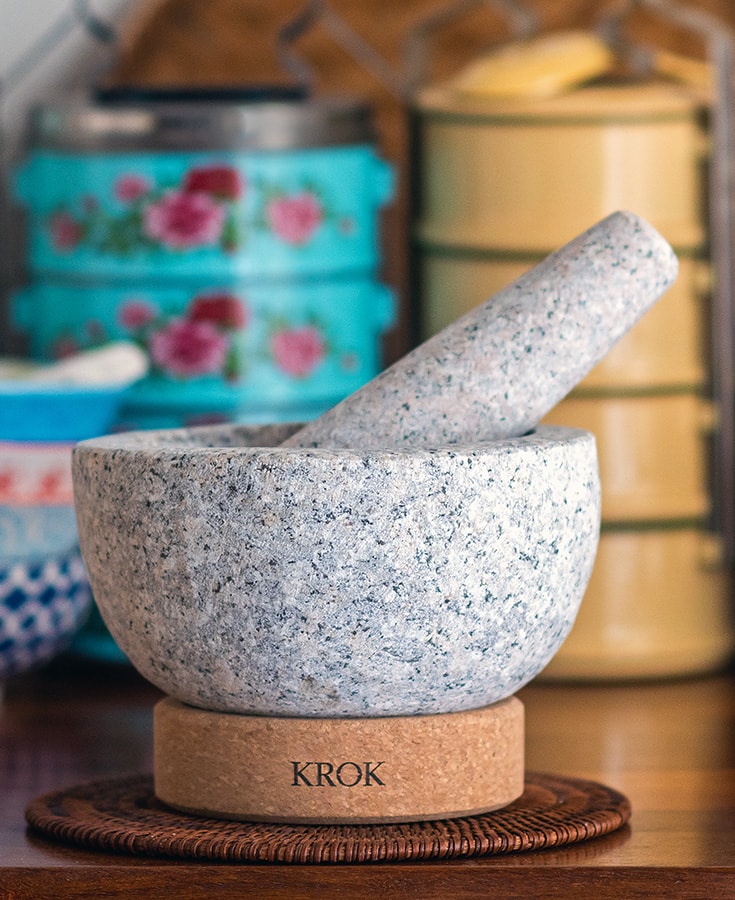 As we loved the KROK so much we’ve now partnered with its makers and joined their affiliate programme, that means that for every KROK you purchase via the links on this page and others, we’ll earn a 10% commission.

We’ll be putting all KROK commissions towards a fund to finance the final road trips we need to do to finish our Cambodia cookbook research, interviews and photography, so buying a KROK is a way for you to support that project – as well as support the artisans in Chonburi creating these beautiful kitchen tools.

If you’re like us and don’t really need another mortar and pestle, but you’d like to support the work we do on Grantourismo or support our epic Cambodian cuisine history and cookbook, you could make a one-off donation or pledge on Patreon.

Note: when you buy a KROK, you’re essentially ordering a KROK and they take three days to make. If you’d like more information about the KROK mortar and pestle, why we think it’s the best mortar and pestle, or our Cambodia cookbook, please leave any questions you have in the Comments below.