Our easy cheese straws recipe makes grissini style cheese sticks that are perfect for your charcuterie boards and cheese plates. Or simply serve them with a homemade olive tapenade or dish of olives, a chilled bottle of crisp white or spritzes or negronis, and you’ve got some very enjoyable drinks snacks right there.

This easy cheese straws recipe makes a fantastic addition to your charcuterie plate or cheese board, although these cheesy snacks are also terrific for dipping into a homemade olive tapenade or creamy hummus. They’re also a perfect accompaniment to a crisp white wine, a day cocktail such as a spritz or a headier after-dark negroni with spices.

And the fact that I made cheese straws as a child is evidence of just how easy and quick they are to make, coming together in just 30 minutes – which is handy, as they’re completely addictive, so don’t be surprised if you eat them all before your guests arrive.

My best tip for making this easy cheese straws recipe is to have enough ingredients on hand in case you do just that and need to stick another batch in the oven.

Before I tell you more about this easy cheese straws recipe, we have a favour to ask. Grantourismo is reader-funded. If you’ve cooked our recipes and enjoyed them, please consider supporting Grantourismo by using our links to buy travel insurance, rent a car or campervan or motorhome, book accommodation, or book a tour on Klook or Get Your Guide. You could also browse our Grantourismo store for gifts for food lovers, including food-themed reusable cloth face masks designed with my images.

Another option is to support our epic Cambodian cuisine history and cookbook on Patreon; or buy us a coffee, although we’ll probably use our coffee money to buy cooking ingredients for recipe testing; or buy something on Amazon, such as these cookbooks for culinary travellers, James Beard award-winning cookbooks, cookbooks by Australian chefs, classic cookbooks for serious cooks, travel books to inspire wanderlust, and gifts for Asian food lovers and picnic lovers.

Now let me tell you more about our easy cheese straws recipe and if you enjoy this, you might also want to browse our collection of best dip recipes for crackers and crudités for festive parties, which include recipes for these sourdough crackers and spicy Sichuan crackers, and this compilation of cocktail recipes.

Australia’s non-indigenous cuisine during the early ‘colonisation’ period was undoubtedly British-influenced, although it was quickly adapted to local conditions, with an early colonial cookbook featuring recipes for roasted wombat and breaded kangaroo brains deep fried in emu oil.

Dairy cattle were transported from England to Sydney on the First Fleet in 1778 to provide milk and cheese. Cheese was so important to the diet of the new arrivals that cheese was even included in convict rations – although that cheese was English cheddar not Italian cheeses such as ‘parmesan’.

While cheese production plans were set back after the four cows and bulls escaped, they were found seven years later by which time they’d grown to a herd of a hundred and the first dairy farm was established in 1796 at Rose Hill, not far from the Parramatta River.

During the first century following ‘colonisation’, there were numerous British-Australian cookbooks published, along with Australian cookbooks that called for the development of a new diet and cuisine more oriented toward the geography and climate, which was more Mediterranean and sub-tropical.

Nevertheless, Mrs Beeton’s Book of Household Management, published in London in 1861, “became a household bible for many Australian households” with later editions including a section on Australian cookery from 1891 onwards. Mrs Beeton’s cookbook included a cheese straws recipe.

Cheese straws also featured on some of the earliest menus. I love this reference in a book published in 1929 called The Pleasant Career of a Spendthrift by George Meudell, a Bendigo born banker, stockbroker, bon vivant, and world traveller, who mentions the menu of “the choicest dinner I have ever eaten during forty years of wandering up and down the world”. 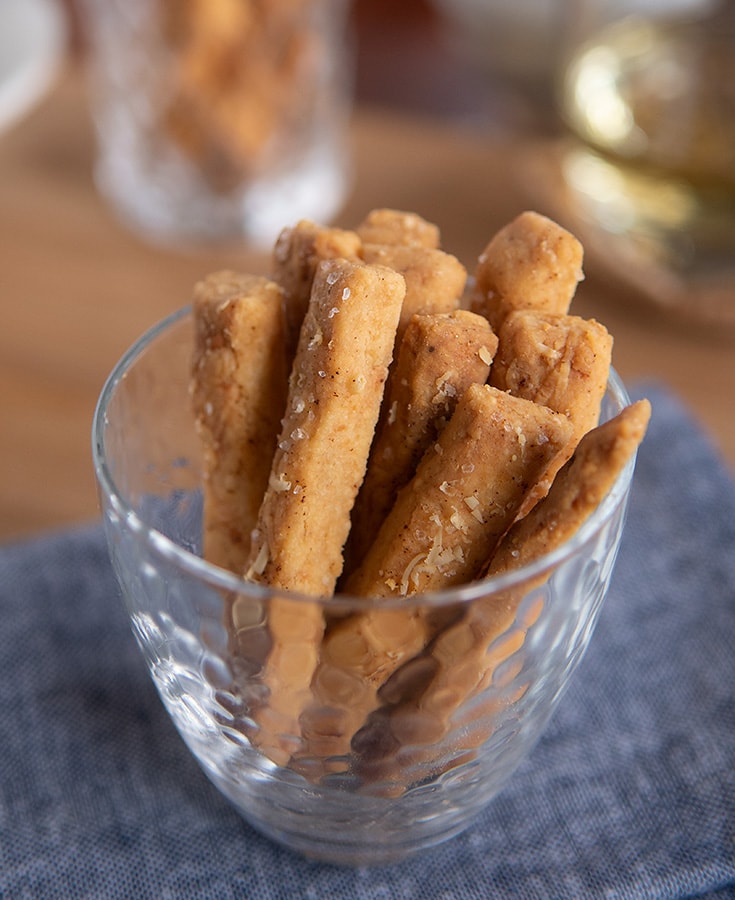 In Melbourne, the legendary grocers King and Godfree, which opened in 1884, was bought by the ancestors of its current Italian-Australian owners in the 1950s, and stocked Italian products such as parmesan cheese.

Although perhaps the first iteration of the grocers might also have stocked parmesan cheese, as parmesan was available decades earlier at Italian-owned delis in Perth, Adelaide and Sydney, so must also have been available to Scotts in Melbourne – after all, Italians had been arriving in small numbers since the first two Italians on the First Fleet.

Not long after Sicilian cheesemaker Natale Pasquale Italiano emigrated from Italy to Australia in 1922, he began by producing artisanal cheeses for Melbourne’s Italian community before establishing in the Perfect Cheese Company in 1930, which would go on to become one of Australia’s top cheese manufacturers.

However, and whenever, ‘parmesan cheese straws’ began being made in Australia, by the 1970s recipes for them were regularly being published in Australian cookbooks and magazines such as the Australian Women’s Weekly and they were a staple on my parents’ canapé platters when I was a kid growing up in the Sydney suburbs in the Seventies.

We served them so often that by the time I was eleven I could make them without even looking at a recipe. So just a few quick tips to making this easy cheese straws recipe.

Originating in England, cheese straws travelled with British ‘settlers’ everywhere from Australia to the Americas, and then were adapted locally, although surprisingly the most popular Australia cheese straw recipes don’t vary a great deal from earlier recipes.

While I adored the cheese straws I made as a kid, they’re a little too bland for me now, much like the grissini, which is where I should also address the comparison between cheese straws and grissini.

While cheese straws are often compared to Italian grissini, the similarities are in their elongated shape and flavours – grissini are long and sometimes sprinkled with cheese and sea salt – however, their texture is quite different.

Grissini are harder and crunchier and typically translated to ‘breadsticks’, as they’re made with bread flour and yeast. These cheese straws, by contrast, are made with a short pastry and while they will go harder the longer you bake them, they’ll never be as hard as grissini, and will remain a little crumbly.

Cheese straw recipes often only differ by an ingredient or three and preferences when it comes to techniques. For example, most recipes suggest transferring the sticks to the baking tray and then sprinkling on cheddar or parmesan cheese.

So here comes my first tip to making this easy cheese straws recipe: don’t do that. 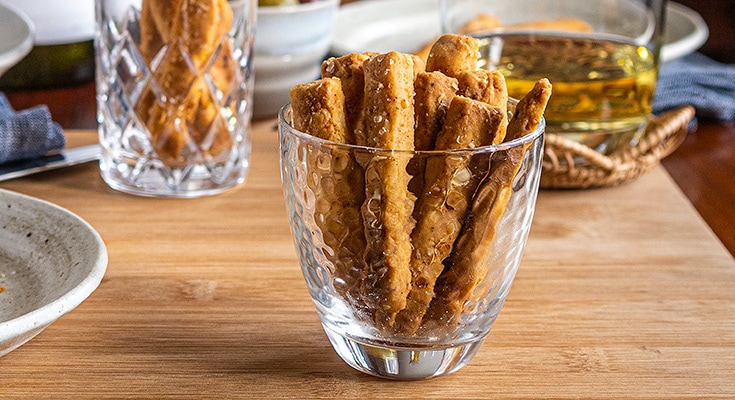 Instead, I recommend sprinkling the cheese and coarse sea salt onto the ‘straws’ after you’ve sliced them and then pressing down lightly on them so the cheese and salt doesn’t fall off on the transfer, otherwise that’s a waste of good quality ingredients.

The other consideration is the length. While most cheese straws a long, short cheese straws hold together better and do a better job when it comes to dipping them in tapenade and hummus.

I’ve provided specific lengths below for long and short cheese straws, which a lot of recipes bewilderingly don’t, so you can choose either or make both, which is what I just did with my recent batch.

Another tip: when it comes to the cheese, traditionally cheese straws have been made with cheddar or parmesan or a combo of both. I’ve used three cheeses for my easy cheese straws recipe.

Do experiment but note that you need a larger percentage of hard cheese so that they’re not too crumbly. Blue cheese is wonderful but use too much and they won’t hold together.

As for the seasoning, having lived in Southeast Asia for over a decade, we love a lot of flavour, but this might be too much for you if you don’t. If you do, you’re going to love our easy cheese straws recipe.

Please do let us know in the comments below if you make our easy cheese straws recipe as we’d love to know how it turns out for you.