This classic Spanish chorizo and potato croquettes recipe for croquetas de patata y chorizo makes a delectable snack with a light crunchy exterior encasing fluffy chorizo-flavoured mash potatoes. They’re a popular tapas bar snack in Spain and are so popular some bars even specialise in croquettes offering a diverse array of fillings.

This recipe for croquetas de patata y chorizo is one of our favourite recipes with chorizo and it’s next in our series of best Spanish tapas recipes, which we’ll be sharing with you over coming weeks. We kicked off the series last week with this Spanish meatballs recipe for albondigas and next up we’ll share recipes for Spanish chorizo in red wine for chorizo al vino tinto, Spanish style garlic shrimp for gambas al ajillo, calamari al plancha for smoky squid cooked on a griddle, and more.

As with so many of our recipes over the last two years, the series is a result of longing for Spain, Spanish food and the delicious experience that is the tapas bar crawl, a leisurely bar-hop from one boisterous spot to another to sip wine or vermouth as you nibble on snacks, preferably in the company of new friends.

Before we tell you more about this Spanish chorizo and potato croquettes recipe, we have a favour to ask. Grantourismo is reader-funded. If you’ve enjoyed our recipes or other content on the site, please consider supporting Grantourismo. You could buy us a coffee and we’ll use that donation to buy cooking ingredients for recipe testing or you could contribute to our epic original Cambodian cuisine history and cookbook on Patreon.

You could also shop our Grantourismo store on Society6 for gifts for foodies, including fun reusable cloth face masks designed with Terence’s images. Now let’s tell you about our this traditional Spanish meatballs recipe for albondigas.

While we might have discovered Spanish tapas in Australia, where we regularly pulled up stools at the tapas bars in Sydney’s Spanish Quarter to nibble on patatas bravas, albondigas and chorizo en vino, we fell in love with the tapas bar ritual in Madrid.

On our first holiday together to Spain back in 1999 – which was my second trip to the Spanish capital, where I’d spent time a couple of years earlier for my Master’s degree, so I already had favourite spots I wanted to take Terence to – we became so completely addicted to our early evening tapas bar hops, we’d spend the day scoping out new spots to try.

We also became addicted to croquetas in all their many and varied forms. Some potato croquettes were made with mashed potato and ham instead of chorizo, or béchamel and ham, or ham and a soft gooey cheese – the variety was endless. Some were round rather than this zeppelin shape.

Every tapas bar had croquettes on the menu, one tapas bar we frequented specialised in croquettes, while another that we returned to again and again, Casa Labra, an atmospheric tavern dating to 1860, just off Plaza de Sol, was renowned for its creamy cod croquettes (along with pieces of fried cod).

Much to our delight we’d discover that another city we became smitten with, San Sebastian, in the autonomous Basque Country, was also a croquette-loving town with Spain’s best tapas bar scene, although there the snacks are called pintxos. More on that in another post. 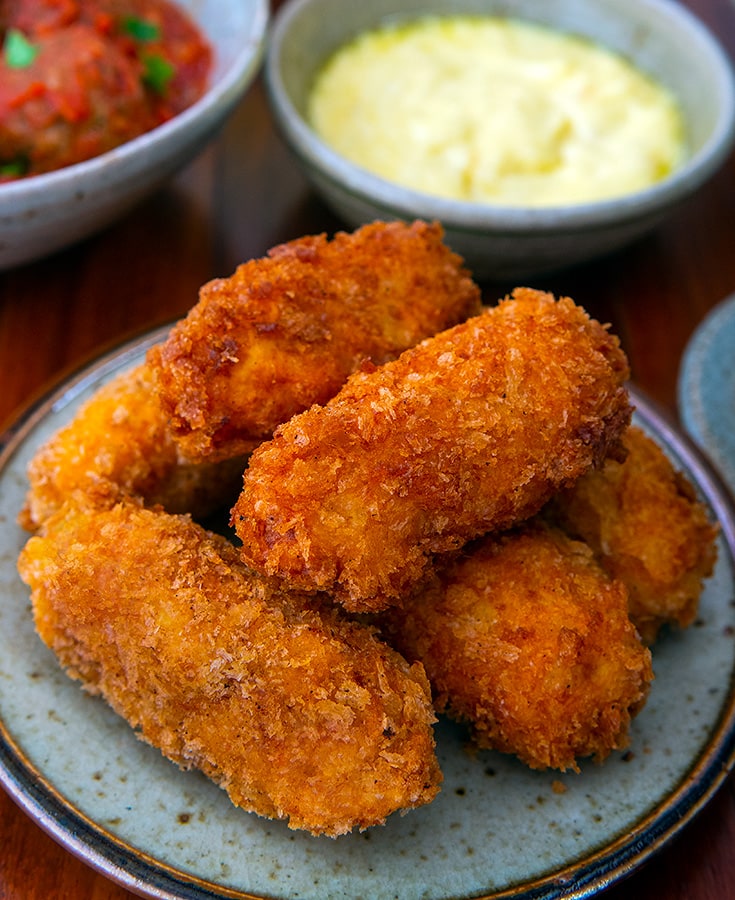 Our first tip to making these Spanish chorizo and potato croquettes is that it’s essential that your mashed potatoes are dry. Terence often roasts the potatoes on a layer of sea salt crystals as he does for a French-style mash.

One big mistake that Terence says he often sees in recipes and videos on making mashed potatoes, and not only making potato mash for potato croquettes, is that home cooks and food bloggers often peel and chop the potatoes into small chunks to boil them.

To cook the mashed potatoes for these Spanish chorizo and potato croquettes you need to boil the potatoes with skin on in very salty water until the potatoes are done. Then peel the potatoes when they are cool enough to handle, but don’t wait until they’re cold.

We’ve been in restaurants where we’ve watched chefs peel hot potatoes wearing oven mitts, because they want to put them through a potato ricer while the potatoes are still warm.

Another tip regarding the potatoes for these Spanish chorizo and potato croquettes is make sure to use potatoes that are starchy and not waxy (which are better for salads, unless of course you’re making Japanese potato salads, which have a texture between a potato salad and mashed potatoes). Russet potatoes or a similar variety are best for these chorizo and potato croquettes.

Just like the mashed potatoes we make to fill our Russian vareniki (dumplings filled with potato mash) we do not add any milk or butter to the mash as the liquid will seep out when you are frying the potato croquettes and may cause the croquettes to fall apart. 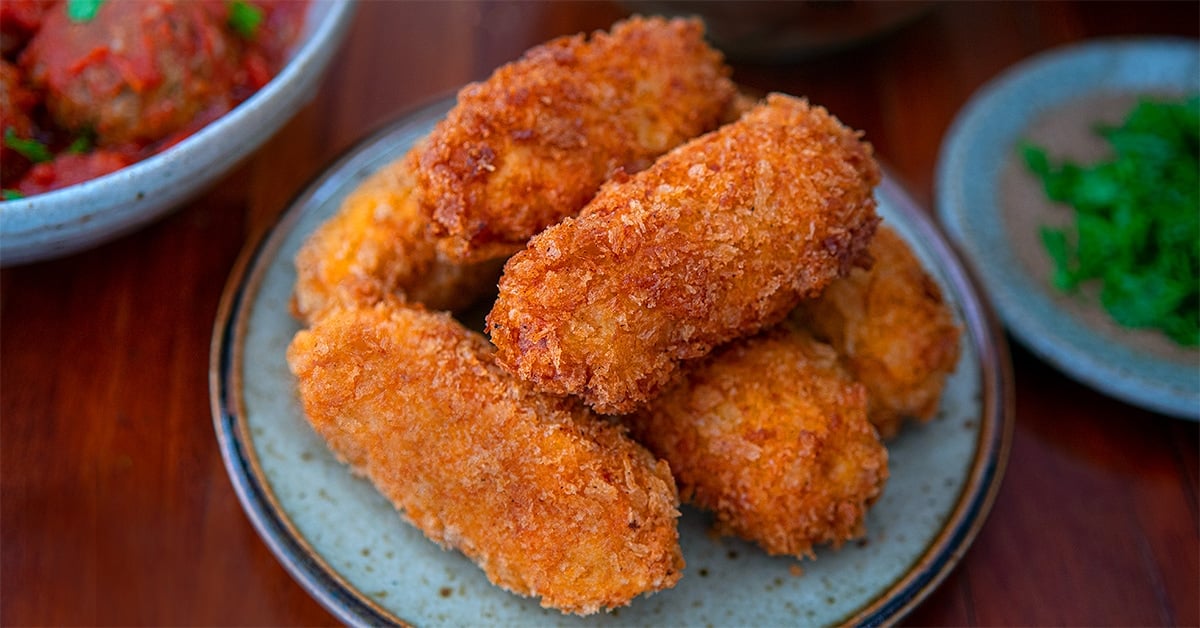 With the chorizo, it is best to use fresh chorizo, but only cook the crumbly chorizo very quickly. If you have firm chorizo, you do not need to fry it off, but chop it into very small pieces so the croquettes don’t have large chewy chunks in them.

The reason is that panko breadcrumbs are incredibly dry and result in a crunchier exterior. If you want those sandy Italian-style breadcrumbs, just run a rolling pin over the panko crumbs in a plastic bag.

These croquettes need to be deep-fried. This is not optional. You will spend more time rolling them around in not quite hot enough oil if you try to shallow fry them. And cooking them in the oven might make you feel better about your health but it’s like reheating frozen food, it just doesn’t taste the same.

We want to deep-fry these at the classic deep-fry temperature of 180°C (350°F). Any hotter and you risk having dark brown casings but a cold mix inside because the outside has browned before the chorizo-potato mash filling can warm up. Please use a thermometer rather than dropping a bit of panko in the oil, which is not a temperature measurement, it’s a guesstimate.

We’ve always eaten these with aioli (recipe coming soon), but some people prefer just to eat them on their own in tapas bars in Spain – thus avoiding people ‘double-dipping’. Fancier sit-down restaurants will give you a serving with aioli.

Please do let us know in the comments below if you make our Spanish chorizo and potato croquettes recipe for croquetas de patata y chorizo as we’d love to know how they turn out for you.