This Spanish chorizo in red wine recipe makes chorizo al vino tinto, a popular Spanish tapas dish served in tapas bars in Spain and abroad. While easy to make, there are a few important things to know: semi-cured Spanish chorizo is best; use a quality red wine you’d be happy to drink; and don’t over-cook the chorizo so it goes hard.

We kicked off the series a couple of weeks with this Spanish meatballs recipe for albondigas and then last week we shared a recipe for chorizo and potato croquettes or croquetas de patata y chorizo.

As with so many of the recipes we’ve published here on Grantourismo since the pandemic started, this series is the result of missing travel and the wonderful food and culinary cultures in countries we love.

We are especially missing Spain’s mouthwatering experiences, such as the tapas bar crawl, a serendipitous bar-hop from one lively spot to another to nibble on tasty snacks while sipping glasses of vermouth.

Before I tell you more about this Spanish chorizo in red wine recipe for chorizo al vino tinto, I have a favour to ask. Grantourismo is reader-funded. If you’ve enjoyed our recipes or other content on the site, please consider supporting Grantourismo. You could buy us a coffee and we’ll use that donation to buy cooking ingredients for recipe testing or you could contribute to our epic original Cambodian cuisine history and cookbook on Patreon.

You could also shop our Grantourismo store on Society6 for gifts for foodies, including fun reusable cloth face masks designed with Terence’s images. Now let’s tell you all about this Spanish chorizo in red wine recipe for chorizo al vino tinto.

This Spanish chorizo in red wine recipe for chorizo al vino tinto makes a classic tapas bar staple found all over Spain and in Spanish tapas bars abroad, such as those we used to frequent in the Spanish Quarter of Sydney many lunas ago.

The genius of what appears to be a relatively simple dish is that the chorizo pieces release their fat and flavours, mixing with the red wine to make a great sauce that’s begging to be mopped up with some bread.

Before we tell you all about this recipe, let’s share a little bit more about chorizo – pronounced chore-reeth-oh in Madrid, which is home to some of our favourite atmospheric old-school tapas bars in Spain.

There are different types of chorizo sausage, as we explained in our guide to how to cook chorizo with eggs, but variations are not only due to whether the chorizo is fresh or cured or even semi-cured, but also where the chorizo originated from.

Depending upon the country and region the chorizo comes from, whether it’s from Spain or the Basque country or Portugal or Mexico and so on, the chorizo takes different forms. Worth noting that Spain is the home of chorizo and the Spanish remain the biggest producers of chorizo. 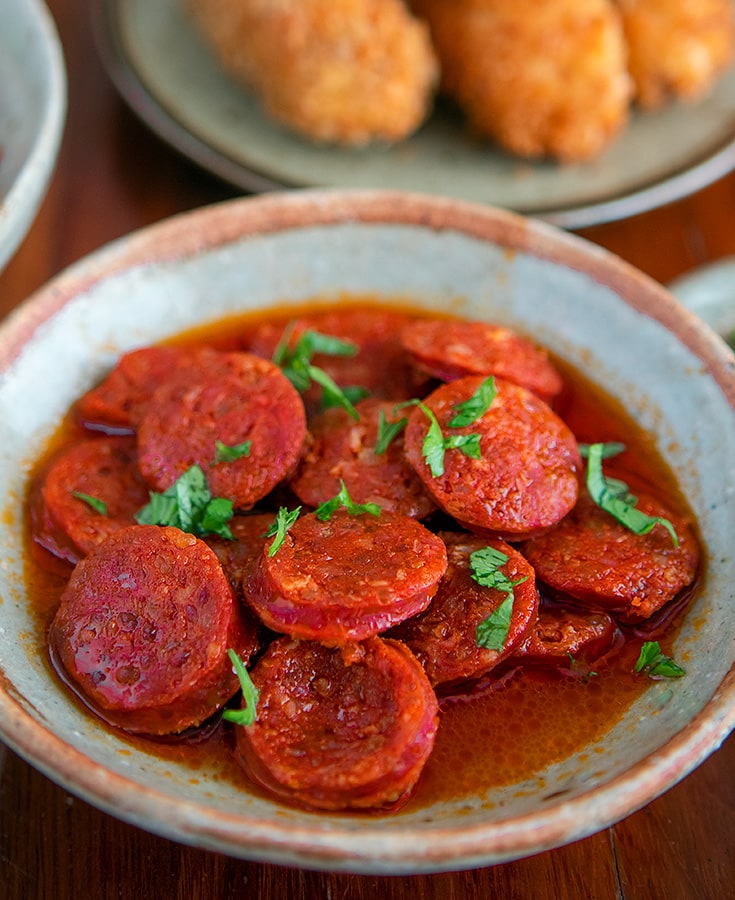 Chorizo from the Basque region, for instance, has a chunky meat texture and the chorizo is generally sold fresh, which means that the sausages need to be cooked before eating. The Portuguese chorizo (chouriço) has both fresh and smoked varieties.

Across the Atlantic, Mexican chorizo is mostly fresh, which means not cured, and quite crumbly, and is sold with or without a sausage casing, both of which need to be cooked. The mince-like texture is perfect for dishes such as this huevos revueltos con chorizo or scrambled eggs with chorizo sausage recipe.

Some claim that there is only one kind of Spanish chorizo — absolutely not true! Spanish chorizo can fall into main camps. There’s the soft fresh chorizo that must be cooked, the firmer, drier, cured chorizo sausage, which can be eaten just as you’d eat any cured salami and is generally eaten in thin slices.

Then there’s semi-cured chorizo, which falls somewhere in between – which means it has a firmer sausage-like texture of a cured chorizo, but it still needs to be cooked like a fresh chorizo, and this is the perfect chorizo for this Spanish chorizo in red wine recipe.

Another thing that differentiates one chorizo sausage from another is pimentón, the Spanish smoked paprika. We went behind the scenes of a charcuterie in Catalunya with the excellent Aborígens tours some years ago, and while chorizo wasn’t their main product, the makers still took their paprika seriously, growing and drying their own peppers as the subtleties of the heat and smoke is what really differentiates chorizo.

With the semi-cured chorizo used in this recipe, it’s the pimentón and the fat rendering together that really flavour the sauce. But while the wine plays a supporting role in the boldness of the sauce, it’s still a key ingredient, so choose your wine carefully. More on that below.

I only have a few quick tips to making this Spanish chorizo in red wine recipe for chorizo al vino tinto as it’s super easy, but there are still some important things to know. 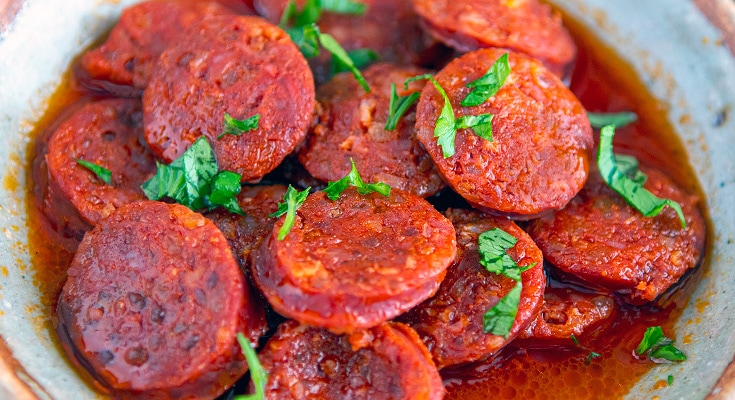 Just a few tips to making this Spanish chorizo in red wine recipe for chorizo al vino tinto as it’s so easy. But that doesn’t mean you can’t go wrong. There are a few important things to be aware of…

Firstly, make sure you’re cooking the right chorizo. You want to buy a semi-cured Spanish chorizo, which, as I explained above, will be firm like the cured chorizo sausage, but it’s not completely cured, so it still needs to be cooked.

That’s not to say that a semi-cured chorizo sausage won’t go hard. It will if you cook it for too long. Some people might like that texture as I’ve spotted numerous recipes calling for the chorizo to be cooked from anywhere from 45 minutes to an hour.

While you could certainly cook the small whole chorizo sausages for that long if you wished, you don’t want to cook sliced chorizo pieces for that length of time.

Once the chorizo slices are cooked, still bright red, and their edges have just started to curl, they’re ready as far as I’m concerned. You want them to be a little firm but still a little soft and a lot juicy, having soaked up the wine. So let’s talk about the wine.

I’ve spotted some recipes suggest you use whatever leftover dregs you have in an open bottle or a cheap supermarket brand. Definitely not. Only use a quality wine that you’d be happy to sip in a glass.

A lot of Spanish cooks recommend a big full-bodied Syrah or Shiraz but we prefer a less heady, less syrupy texture and suggest a medium-body instead as you still want to taste the chorizo.

Once the chorizo is ready, remove it from the heat, transfer the chorizo and sauce to a dish, garnish with chopped fresh celery leaves or flat leaf parsley, and serve it immediately while it’s piping hot, with slices of crusty bread to mop up the chorizo juices.

Our favourite tapas bar in Sydney many years ago would serve the chorizo still bubbling as it was brought to us, the owner cautioning us to take care with a “cuidado!” or two.

Please do let us know in the comments below if you make our Spanish chorizo in red wine recipe for chorizo al vino tinto as we’d love to know how it turns out for you.