My pork Stroganoff recipe makes an umami-rich, melt-in-the-mouth pork Stroganoff. The silky, tender-soft texture of the pork comes courtesy of the Chinese velveting technique, a method that calls for marinating and pre-cooking the pork before stir-frying it. Braised with mushrooms in a richly-spiced sour cream-based sauce, my pork Stroganoff takes inspiration from Shanghai’s East-West Haipai cuisine.

If you enjoyed my richly spiced chicken Stroganoff recipe and you’re a lover of Chinese cuisines and dishes made with the Chinese velveting technique – such as the popular stir-fried pork with mushrooms that partly inspired this dish – you’ll love this pork Stroganoff, especially with crispy shoestring fries, a classic Stroganoff side.

Instead of doing what we do with the beef in my traditional Russian beef Stroganoff recipe, and cooking the meat in the pan with the onion and mushroom sauce, which if you’re not careful can easily result in tough pork, I use the Chinese velveting method to create a silky-soft, super-tender pork.

If applying a Chinese cooking technique to a traditional Russian dish sounds like a strange thing to do, keep in mind that when Stroganoff left the Russian Empire with Russian émigrés following the 1917 Bolshevik Revolution, it landed in Harbin, China, then Shanghai, then Hong Kong, before it travelled to countries such as Australia and the USA.

The food that those Russian émigrés served in the many restaurants and cafés they opened, initially to feed other expatriates missing the flavours of home, was gradually adapted to suit local tastes. No more so than in Shanghai, where an East-West fusion cuisine called Haipai formed. My pork Stroganoff recipe is inspired by that concept, time and place.

Now before you scroll down to our pork Stroganoff recipe, we have a favour to ask. Grantourismo is reader-funded. If you’ve cooked our recipes and enjoyed them, please consider supporting Grantourismo by supporting our epic Cambodian cuisine history and cookbook on Patreon, which you can do for as little as the price of a coffee. Or you could buy us a coffee and we’ll use our coffee money to buy cooking ingredients for recipe testing.

Another option is to use links on our site to buy travel insurance, rent a car or campervan or motorhome, book accommodation, or book a tour on Klook or Get Your Guide. Or buy something on Amazon, such as these cookbooks for culinary travellers, James Beard award-winning cookbooks, cookbooks by Australian chefs, classic cookbooks for serious cooks, travel books to inspire wanderlust, and gifts for Asian food lovers and picnic lovers. We may earn a small commission but you won’t pay any extra.

Lastly, you could browse our Grantourismo store for gifts for food lovers, including food themed reusable cloth face masks designed with Terence’s images. Now let me tell you more about my pork Stroganoff recipe.

Over the years the food served evolved into Russian-Chinese then Western-Chinese or Haipai cuisine, as menus incorporated other European dishes. But by the close of 1937, when there were over 200 Haipai restaurants, most on Xiafei Road and Fuzhou Road, the most popular dishes were borscht and Stroganoff. 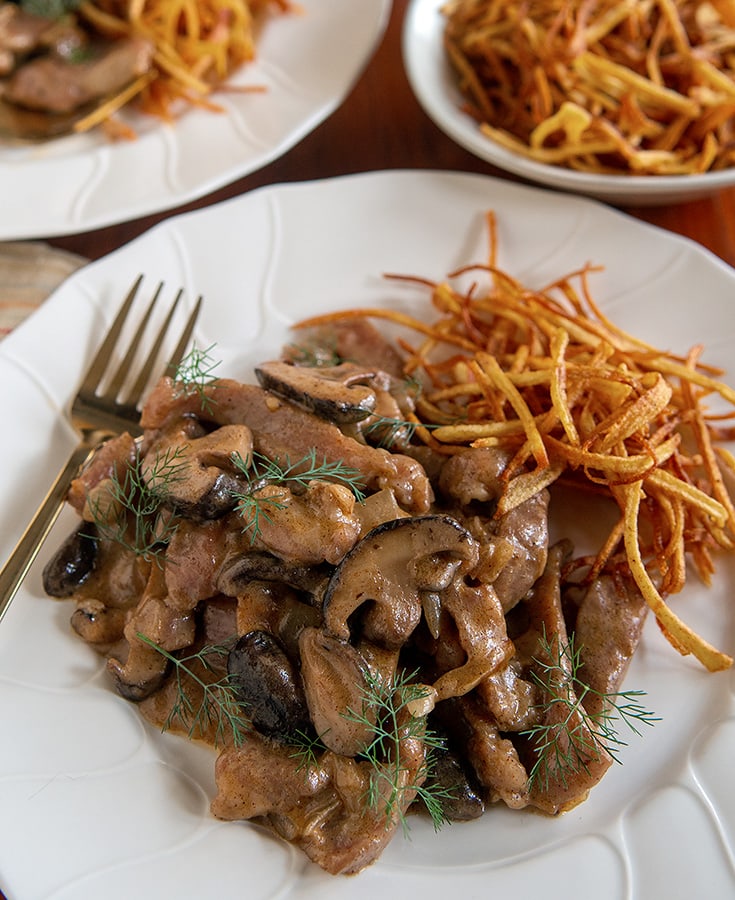 Terence and I have long been fascinated by how food travels with refugees and migrants and how dishes are transformed in their new homes – whether it’s due to an inability to source ‘authentic’ ingredients from home or because new ingredients and techniques are adopted.

In the case of expatriates who start restaurants in their adopted homes, dishes are often tweaked to appeal to the taste of locals, because while expatriates might come and go in waves there will always be a local customer base.

We’ve seen evidence of how food evolves in diasporas all over the world. Indeed some of the most disappointing Russian-Ukrainian food we’ve tasted was in New York – not to mention terrible Turkish food and Indian food – yet exciting new cuisines can also develop.

While those first Russian restaurants no longer exist in Shanghai – a handful did survive for decades after the émigrés had resettled in Australasia, North America and other parts of the world – Haipai cuisine can still be found and is in fact making a comeback.

During my research I came across a few Chinese borscht recipes – and I’m going to test those out and share a recipe here – but I couldn’t find a Chinese Stroganoff recipe, and the Stroganoff dishes on menus were beef Stroganoff, not pork Stroganoff.

I went with pork because the Chinese, like Southeast Asians, adore their pork, and the pork is incredibly delicious. One of the most popular Chinese dishes is a classic stir-fried pork with mushrooms.

I took inspiration from that dish, which is how I came to use the Chinese velveting technique, but I stuck with the flavours of my chicken Stroganoff, which is loaded with the deep savouriness of umami. I only have a few tips to making my pork Stroganoff recipe. 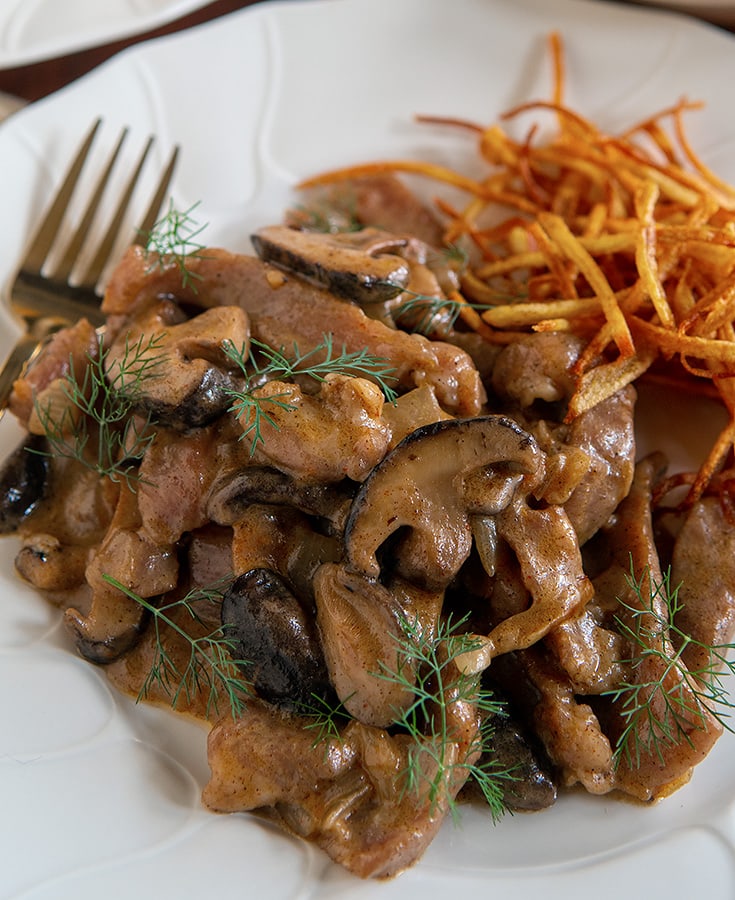 Just a handful of tips to making my pork Stroganoff recipe, as it’s fairly straightforward despite the couple of extra steps that comprise the Chinese cooking method called velveting. There are two stages to velveting, marinating the meat, then quickly pre-cooking it before stir-frying it.

The second stage of velveting involves pre-cooking or par-cooking the meat, which is either done in oil in a very hot wok or under water, which is called water-velveting. I’ve opted for a quick wok-fry as you’ll then continue to use the wok and fry the pork and other ingredients, so that made more sense. It’s also easier.

I usually like to serve my Stroganoff dishes with mashed potatoes or buckwheat kasha, but another traditional Russian Stroganoff accompaniment of shoestring fries is perfect with pork Stroganoff, as is rice for an Asian inspired Stroganoff, andI went with brown rice.

If you’re serving this pork Stroganoff as part of a family feast, I also recommend a Russian garden salad on the side, some piroshki, and perhaps Russian pelmeni which also came from the East, from Siberia, but perhaps arrived during the Mongol invasions.

Despite the Asian inspiration, Stroganoff is inherently Russian, which means you will still want to garnish your dish with loads of fresh dill and dollops of sour cream. Gherkins or dill pickles also cut through the richness.

Pork Stroganoff Recipe Made with the Chinese Velveting Technique

Please do let us know in the comments below if you make my pork Stroganoff recipe as we love to hear how our recipes turn out for you.