This comforting Russian buckwheat kasha recipe with caramelised onions, bacon lardons, pan-fried mushrooms, and soft-boiled eggs makes my hearty take on my baboushka’s traditional Russian breakfast. Buckwheat or grechka is the key ingredient of this kasha, a savoury porridge that I serve with a dollop of sour cream and plenty of fragrant dill.

My hearty Russian buckwheat kasha recipe with onions, bacon, mushrooms and boiled eggs makes a comforting savoury Russian porridge (kasha) made with buckwheat groats (grechka) that is based on my Russian grandmother’s recipe. Despite the rustic appearance, it is perhaps the least traditional of all my Russian family recipes but it’s one of my favourite buckwheat recipes.

I have to confess that of all the traditional Russian breakfasts my baboushka used to make, kasha was not one of my favourite breakfasts as a child. While I happily tucked into Baba’s French toast, blini, potato cakes, and buckwheat pancakes, I politely resisted her offer of kasha if I could without insulting her.

As a little kid, it was the strange smell that put me off more than the nutty taste of the ancient grain, and it wasn’t until I was a young adult going to Sydney University and visiting my grandparents for overnight stays that I finally got kasha.

But before I tell you about my Russian buckwheat kasha recipe, I have a favour to ask. Grantourismo is reader-funded. If you’ve made any of my Russian family recipes or any of our recipes at all and enjoyed them, please consider supporting Grantourismo so we can keep creating food stories and recipes.

You could click through to this post for ways to support Grantourismo, such as booking accommodation, hiring a car or campervan or motorhome, purchasing travel insurance, or booking a tour on Klook or Get Your Guide. We’ll earn a small commission if you do, but you won’t pay any extra.

You could also shop our online store, where we’ve got everything from gifts for street food lovers to food-themed reusable cloth face masks created from Terence’s images; support our epic first-of-its-kind Cambodian culinary history and cookbook on Patreon; or purchase something on Amazon, such as one of these James Beard 2020 award-winning cookbooks, classic cookbooks for serious cooks, cookbooks by Australian chefs, cookbooks for foodie travellers, and gifts for Asian food lovers and picnic lovers. Now let me tell you about my Russian buckwheat kasha recipe.

This Russian buckwheat kasha recipe with caramelised onions, bacon lardons, pan-fried mushrooms, and soft-boiled eggs makes my take on my baboushka’s traditional Russian breakfast. Buckwheat or grechka is the key ingredient of this kasha, a savoury porridge that I’ve spiced up, which I serve with a dollop of sour cream, diced gherkins, and plenty of fragrant dill.

As a child growing up in a Russian-Australian family – mum’s side being Russian and dad’s Australian – I grew up eating everything from French and Italian food to Chinese and Indian cuisines. That’s my excuse for including virgin olive oil, star anise and fish sauce into what is otherwise a fairly traditional Russian buckwheat kasha recipe. Don’t knock it until you try it.

One of the other differences is in the presentation, particularly combining half the caramelised onions, bacon and mushrooms with the buckwheat before serving it, and placing the other half of the ingredients on top.

The final difference is the boiled egg. My baboushka served chopped-up hard-boiled eggs on top of her kasha, whereas I prefer soft-boiled eggs – even runny eggs – which I love to stir through the buckwheat kasha, with the sour cream and loads of fresh fragrant dill. 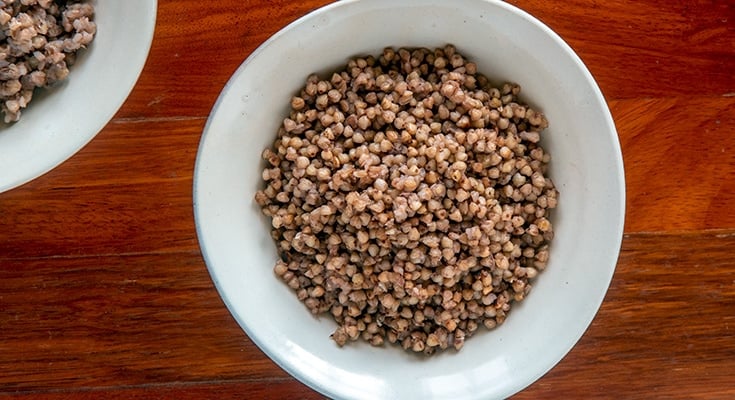 Just a few important tips to making this Russian buckwheat kasha recipe. These days buckwheat groats are generally sold roasted and cleaned, but if you’re in the habit of washing rice before you cook it then you’ll probably want to run your buckwheat groats under running water.

If you’re using roasted buckwheat groats, then after rinsing them you can go straight to the cooking stage, otherwise you can pan-roast the buckwheat groats in a dry pan on low heat until they are golden brown and smell nutty.

At the same time, you don’t want to over-cook the buckwheat, so if it looks like the water has evaporated and they’re done earlier than the times below, then remove the buckwheat so it doesn’t burn. You want your cooked buckwheat groats to look like our’s in the pic above. 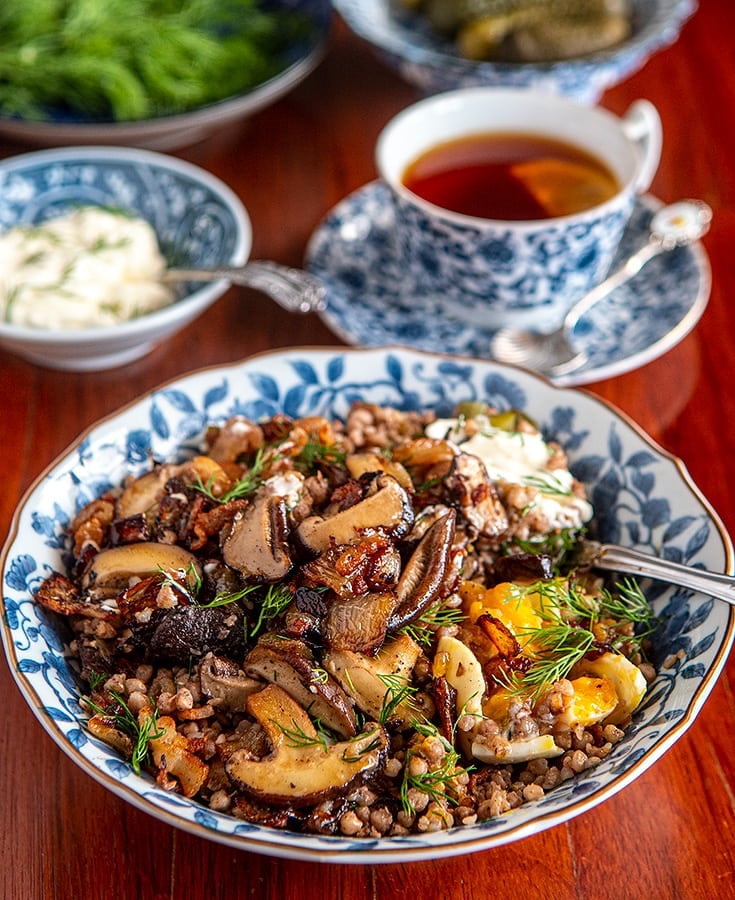 While you should have enough time to prep the other ingredients and fry your bacon lardons, onion and mushrooms while the buckwheat is cooking, if you’ve never made buckwheat before and you want to ensure you don’t over-cook it and don’t burn it, you could do this prep first to be safe.

It is very easy to burn buckwheat if you don’t begin with boiling water, which is why you should make sure you have a rolling boil before putting the lid on, and if the water evaporates completely and you don’t remove the buckwheat in time.

This Russian buckwheat kasha recipe traditionally makes what is essentially a savoury porridge that was eaten for breakfast, but it also works for brunch, lunch and a comforting dinner, especially on a cold winter’s night.

If serving it for lunch or dinner, it goes very nicely with piroshki, Russian pelmeni or stuffed cabbage rolls if you’re really in need of comfort food. If you want to lighten things up, serve it with a Russian garden salad.

Please do let us know in the Comments below if you make this Russian buckwheat kasha recipe as we’d love to know how it turns out for you, and we’d also love some feedback and a rating too.