My meatball Stroganoff recipe combines recipes for two of my favourite Russian dishes, a spicy mushroom Stroganoff and juicy Russian meatballs called tefteli. It makes a deliciously comforting dish of Stroganoff meatballs that in winter can be served with mashed potatoes, pasta or rice and in summer can be lightened up with a fresh green garden salad.

If you’re fond of beef Stroganoff and its various iterations – from chicken Stroganoff to mushroom Stroganoff – and you’re also a devotee of meatballs (more meatball recipes here), then you’re going to adore this meatball Stroganoff recipe which makes the soft succulent Russian meatballs called tefteli that swim in the famous mushroom dish that’s something of a global phenomenon.

If you’re in the chilly southern hemisphere winter right now, then you probably won’t think twice about making my Russian meatball Stroganoff recipe. The dish is essentially juicy, tender and textured meatballs in a gently spiced mushroom gravy. It’s such a warming and filling dish, especially when served with creamy mashed potatoes, pasta or fries.

But I’ll happily tuck into a smaller serving of meatball Stroganoff in summer, too. During the warmer months, I’ll do as the Italians do – most Italian-style meatballs or polpetti are served with little else but a side of rucola – and I’ll enjoy this dish with a fresh green garden salad.

Now before I tell you more about my Russian meatball Stroganoff recipe, I have a favour to ask. Grantourismo is reader-funded. If you’ve cooked our recipes and enjoyed them, please consider supporting Grantourismo by supporting our epic Cambodian cuisine history and cookbook on Patreon, which you can do for as little as the price of a coffee, or buy us a coffee and we’ll use our coffee money to buy cooking ingredients for recipe testing.

Another option is to use links on our site to buy travel insurance, rent a car or campervan or motorhome, book accommodation, or book a tour on Klook or Get Your Guide. Or buy something on Amazon, such as these cookbooks for culinary travellers, James Beard award-winning cookbooks, cookbooks by Australian chefs, classic cookbooks for serious cooks, travel books to inspire wanderlust, and gifts for Asian food lovers and picnic lovers. We may earn a small commission but you won’t pay extra.

Lastly, you could browse our Grantourismo store for gifts for food lovers, including food themed reusable cloth face masks designed with Terence’s images. Now let me tell you all about my meatball Stroganoff recipe.

My mother and grandmother did not make this meatball Stroganoff recipe. I take full responsibility for this one. But I’m certain my baboushka, being a maker of addictively-delicious meatballs, would have approved and enjoyed this.

I grew up in the 1970s on mum’s fairly classic beef Stroganoff of melt-in-the-mouth slices of beef in a creamy gravy, served with dad’s chunky mashed potatoes. Aside from the mushrooms and onions, mum’s strog wasn’t too far removed in flavour from the earliest documented Russian beef Stroganoff recipe in Elena Molokhovets’ A Gift to Young Housewives, published in 1861.

As tasty as it is, Molokhovets’ recipe for Govjadina po-strogonovski s gorchitseju or beef in the Stroganoff style with mustard, includes little more than the tender beef, allspice, butter, salt, flour (to coat the beef), sour cream, bouillon, pepper, and Sareptskaja mustard. Her recipe didn’t list paprika nor the condiments that I love to include. They would come later.

That doesn’t mean Russians weren’t already eating beef stews or beef and mushroom stews – there are detailed instructions for preparing beef stews using every bit of the cow in Domostroi: Rules for Russian Households in the Time of Ivan the Terrible, first published in 1533 – and mushrooms feature heavily, fresh, dried, pickled, boiled, baked, and fried in butter; in pies, pastries, patties, fritters, tarts, dumplings, soups, and stews.

Kabul sauce – or Soy Kabul sauce or Mogul sauce – was also listed as an ingredient in an Olivier salad recipe published in the March 1894 issue of the Russian culinary magazine Наша пища or Our Food, edited by M Ignatiev. 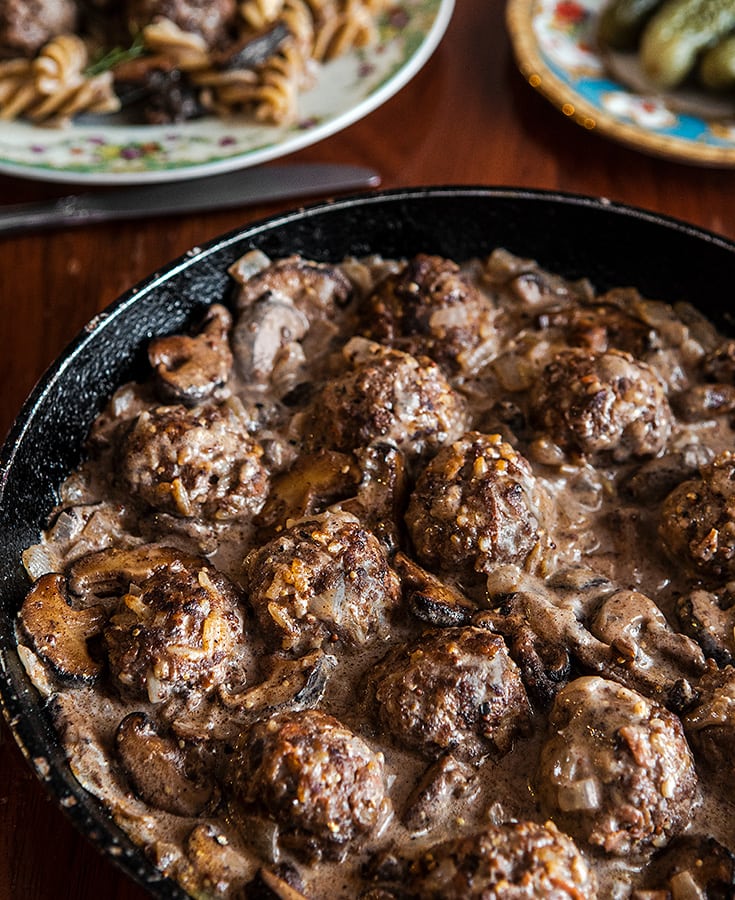 Said to have been a brown colour, Kabul sauce (also spelt Cabul Sauce) was described as a sweet and sour, umami-rich condiment likened to Worcestershire sauce. While ingredients varied between recipes, they typically included any combination of ‘soy’ or fermented soya beans, mushrooms, various spices, peppers, cayenne, anchovies and even oysters. Some later recipes substituted Kabul/Mogul sauce for soy sauce.

Russians soon began manufacturing various versions of the condiment, one of which was called Kabuli. Apparently renamed Cabuli after the Russian revolution, it remained throughout the Soviet era, when it was mentioned in recipes in Soviet cookbooks such as the Book of Healthy and Tasty Food, first published in 1939.

I haven’t yet been able to determine exactly when, but, at some stage during the mid-20th century, the sauce was renamed or substituted for Yuzhny or South Sauce or Southern Sauce, recipes for which typically called for tomatoes, onions, garlic, salt, distilled vinegar, spices, raisins, and apple or other fruits. The colour of this sauce was said to be more red than brown.

Aside from the fact that one recipe I spotted included Madeira wine and another salted liver, the sauce is remarkably like ketchup or tomato sauce, which typically includes tomatoes, onions, garlic, salt, vinegar, sugar, and spices, among other ingredients. 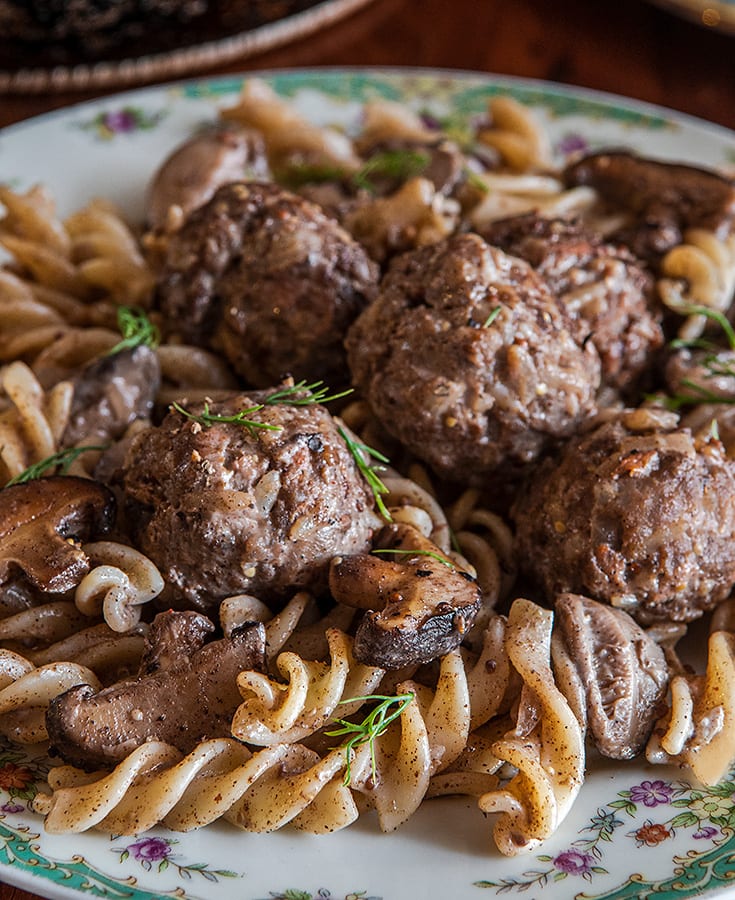 Just a few tips for you to making my Russian meatball Stroganoff recipe, beginning with the meatballs.

When comes to seasoning the meatball mixture with spices and sauces, if you don’t normally cook with a lot of spice or condiments such as fish sauce, start with half my suggested measures then either fry or microwave a little of the mixture to cook it, try it, then adjust the seasoning to your taste.

Adding spices and seasoning gradually and tasting throughout the cooking process is super important. Not only because we all have different palates, but different products can taste vastly different to each other, and fish sauce is a great example, with some brands being so much saltier than others.

I’ve recommended dark soy sauce in my meatball Stroganoff recipe, but if that’s too intensely flavoured for you, go with light soy instead. And if you’re not a fan of the funky flavours of fish sauce, simply leave it out. In addition to umami, fish sauce adds salt, so you may need to increase the salt a little. Taste and adjust as you go.

Do make the meatballs first, so you can refrigerate them and they can firm up while you’re making the mushroom Stroganoff gravy. The meatballs will then hold their shape better when you fry them.

While I usually serve mashed potatoes or shoestring fries with my Stroganoff dishes, I plate this meatball Stroganoff with pasta in the cooler months and pair it with a crisp green garden salad in warm weather. Garnish the meatballs in fresh fragrant dill and serve with gherkins and sour cream. Enjoy!

Meatballs
Mushroom gravy
To fry the meatballs and finish

Please do let us know in the comments below if you make my meatball Stroganoff recipe as we’d love to know how it turns out for you.