Cooking, music, film, film and music, food and film… so far, we’ve done it all in Austin. We learned to barbecue, we met local musicians, we’ve seen lots of music, we’ve talked music with a record storeowner, and we’ve talked music with a filmmaker… So why not have a country music cooking lesson with a musician? While he sings. And plays guitar. Yep, you heard right.

When we arrive at Central Market’s ‘Cookin’ and Singin’ Class with Brandon Rhyder’, Brandon is strumming his guitar and singing a song about food, about eating burgers to be precise. The audience laughs, and Brandon grins, so we assume it’s tongue-in-cheek. 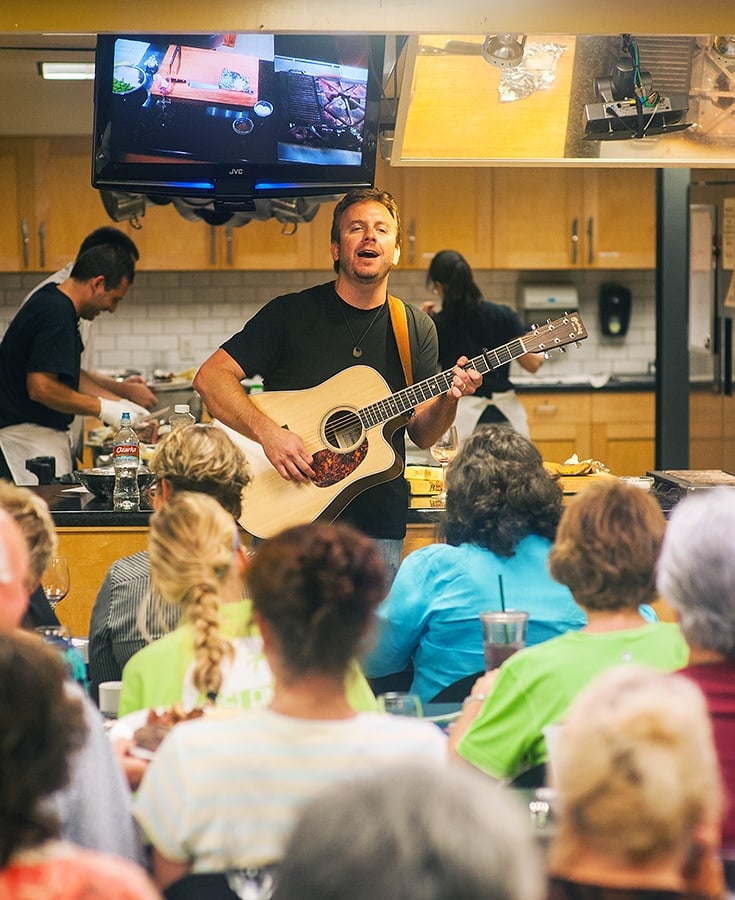 In the professional kitchen behind the laidback singer, Chef Vance Ely at the stove stirring what looks like Chinese greens, while a handful of staff are busying themselves in the background with various food prep tasks.

We’re seated in classroom-like rows, facing the front, where a television monitor gives us a close-up of Chef Vance’s stovetop. There is plenty of silverware in front of us, indicating we’re in for a few courses, and a woman zigzags back and forth along the rows pouring generous glasses of wine.

“When I was a child, I was poor. I knew that cause mama crocheted us footwear for Christmas,” Brandon tells the group, and everyone laughs. “I grew up in a little northeast Texas town and our family grew up together, living on properties butted up against each other. We went squirrel hunting. We farmed ‘organic’ before it was invented. We’d all cook and eat together. Now I’m too busy for forest hunting I get my family to send food home to me. At the moment I’m trying to figure out what to do with all that corn!”

“Do you cook on the road?” someone from the audience asks.

“We do!” Brandon replies, “We have a small grill in the bus but we discovered we can cook on the engine!” The audience laughs. “It stays at a constant of 290 degrees. There’s space on the engine block so we throw on some ribs and by the time we get to the gig they’re ready. Truckers do it and have been doing it for years. It’d be interesting to create a blog about that actually… Now you’re wondering what you’re getting yourselves into… yes, we’re having armadillo tonight!” More chuckles from the room. 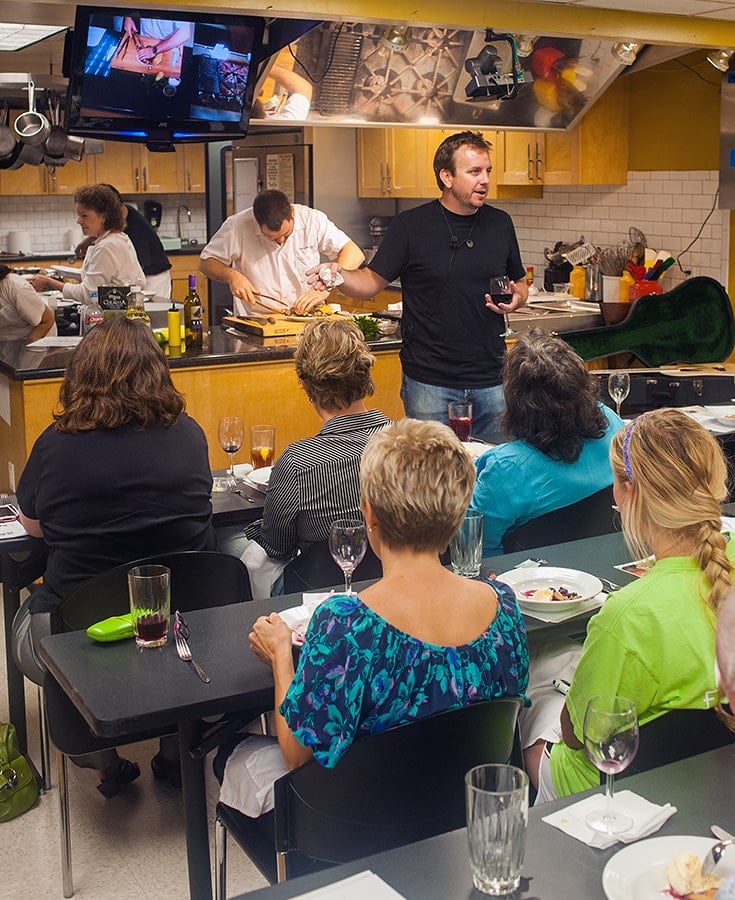 Songs, jokes, laughter, questions, stories, song requests, more music, some chatter about food, some talk about music, and all the time cooking and plating in the background… so goes our evening.

To be honest, we hadn’t heard of Brandon Rhyder before tonight. We just thought the cooking class sounded like fun and seemed a very quirky kind of Austin thing to do. Now we’re sitting here we realise this amiable Texas Country or ‘Red Dirt’ singer is something of a celebrity to the fans in the room. Rock Angel, a track from Brandon’s most recent album, Head Above Water (his sixth), was No. 1 for two weeks on the Texas Music Charts. Brandon has his own label and plays over 200 gigs a year.

Brandon sings another song to his attentive audience called Let the Good Times Roll: “Saturday morning has never been so sweet, to wake up and watch you sleep…” I expect him to sing “eat”, in keeping with the theme of the evening.

As if on cue, Brandon stops strumming to ask us how we like our meat: “Moo-ing?” “Yeah!!” everyone shouts. Pink? But hang on, that’s not how Americans are reputed to eat their meat… ah, but we’re in Texas. Brandon also appears relieved. 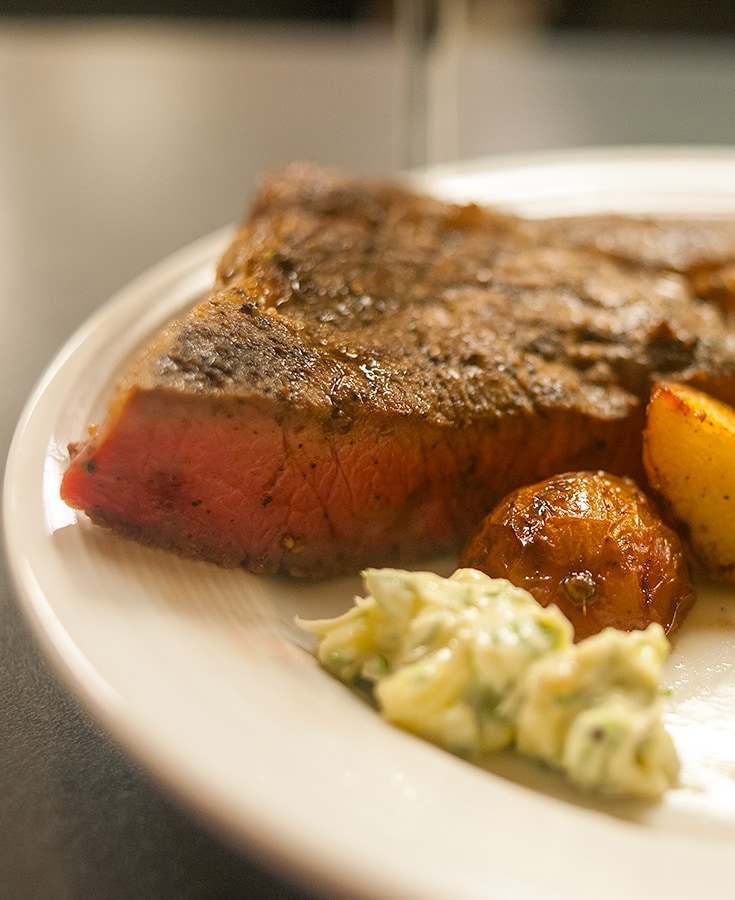 “What do you think of vegetarians?” a participant asks him. “I’ve eaten them all!” he says, grinning, to many giggles. “Do you use oil or bacon lard when you cook?” another asks. “I use oil and crumble bacon into it!” he replies to a nodding audience. “Duck fat!” interjects Vance. Terence and I smile appreciatively.

Vance’s helpers deliver plates to our tables as Brandon talks us through the first dish of mustard greens, yellow tomatoes and corn bread, which is really a side dish for the main. It’s so simple yet it’s absolutely delicious. The greens are super-salty, but are perfectly matched with the sweet hot cornbread, and the fresh, juicy tomatoes.

As we’re tucking into our appetizers like there’s no tomorrow, audience members request more songs. Brandon sings Can’t Hold On to the delighted group. Our steaks are sizzling in the background and we’re salivating. There’s another request and Brandon, obviously distracted by the mouth-watering aromas, starts to sing: “It’s a beautiful morning to eat steak and taters…” He laughs and sips a glass of wine.

Vance’s team starts to plate the steaks and soon after are running them to the tables. Our main course is ‘Steak and Taters and Corn’ according to the class notes in front of us: “This recipe is badass because it’s so easy and so dang good!” Brandon writes in the introduction. “Beefeaters and farmers. Seemed like everybody had a garden. We didn’t have a whole lot of money. But every once in a while we’d have steak and taters and corn. I remember loving every bite…”

We’re also loving every bite! The meat is delicious. It’s bright pink and so tender it melts in our mouths. Vance tells us he used ‘Cowboy cut’ rib eye steaks. “Grill them at 750-800 degrees,” he recommends, “If you can hold your hand over the stove for longer than a second then it’s not hot enough. Cook it medium rare, and just slice it and put some salt and pepper on it. I like to taste the flavour of the meat.” 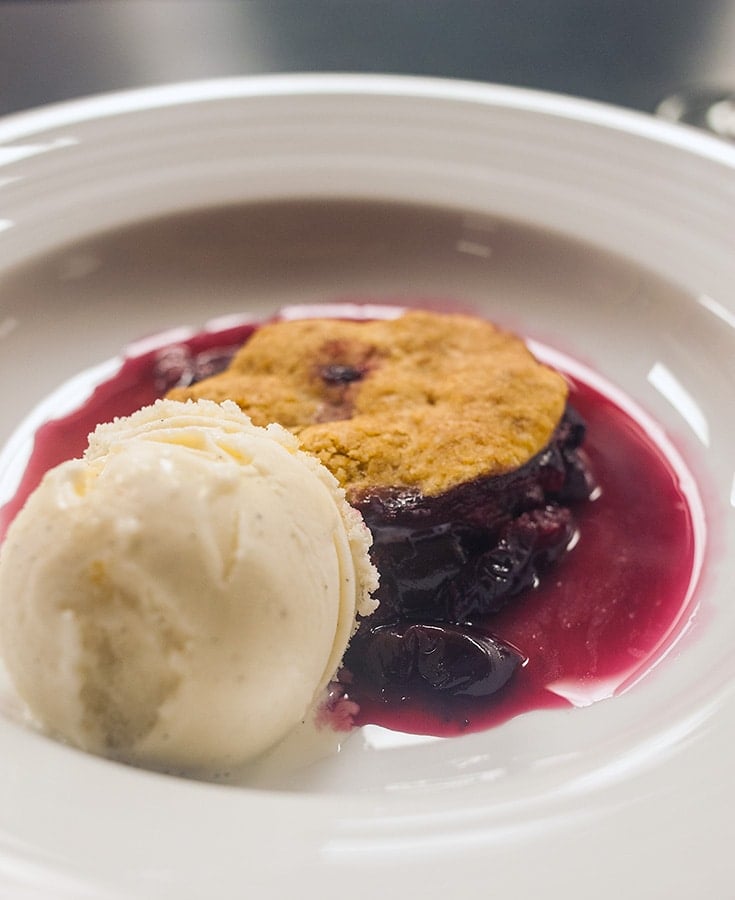 Brandon agrees and tells us how his mother and grandmother would grill the steaks till they saw marks on them, indicating they were ready. He starts singing “I’m not sharing…” then grins again, and sips his red wine.

“What are your musical influences?” someone asks between bites.

“Definitely from the cowboy realm,” Brandon responds. “Growing up in the late 70s, I’d go from my father’s pick-up where he was listening to Willie and Whalen, to the kitchen where my mama was listening to John Denver – she was also an Elvis fan – and she would say to me “Do you hear what they’re singing?” I loved the Beatles – they’re timeless. If you come to my house on a Monday night when I’m cooking, there could be a 30s big band on…”

I ask Brandon what his earliest food memory is. “I was around four… it’s a ham the sheriff used to throw on the fire… and my mother making peanut butter cookies…”

Dessert arrives – delicious, piping hot berries with a thin, crispy biscuit and ice cream – along with more questions (“Did you sing when you were young?” “We yodelled!”), more stories (about a friend who got called up for duty, and the song that followed), more requests (“sing the song about your daughter!”) and more songs (the one about the shoes).

But sadly, we have another gig to go to, so we mouth thank you from the back of the room, and sneak out as Brandon starts to sing “You burn me…” I’m not sure if that one was tongue-in-cheek or not…

Central Market Cooking School offers classes most nights of the week on everything from Tex-Mex sauces to ceviche, as well as techniques such as knife skills. Some classes are ran by their cooking instructors, others by celebrity chefs or feature special guests like Brandon. Not all classes are hands-on – many are demonstrations – so check before booking. Classes can be booked online: