It’s Chinese New Year’s Eve here in Cambodia, in China, and in other countries with Chinese communities, such as Thailand, Singapore and Malaysia, and Lunar New Year in neighbouring Vietnam and East Asian countries that follow the lunisolar calendar, such as Korea, Japan and Taiwan.

We’ve been getting into the spirit of things here in Cambodia and cooking lucky dishes for Lunar New Year or Chinese New Year, as it’s called in Cambodia’s Chinese-Cambodian communities, so thought we’d share a few recipes with you, beginning with this longevity noodles recipe.

While Chinese New Year is not an official government holiday here in Cambodia, you wouldn’t know it. Chinese-Cambodians close their businesses for the day, homes are decorated in red bunting and lanterns, a generous table of offerings made to the Kitchen God are visible in people’s homes, and joss paper is burnt on the road outside.

As you’d expect from a culinary culture as rich as China’s, food plays an important part in Chinese New Year celebrations. The night before Chinese New Year, families will make dumplings together, and on New Year’s Eve the day is spent visiting family, particularly elderly relatives, to whom gifts of food are taken.

Among the abundant offerings laid out in the morning for the Kitchen God and ancestors to be enjoyed by the family on New Year’s Eve is ‘lucky food’, such as citrus fruit, bamboo soup, a whole chicken – the word for chicken sounds like ‘luck’ – and longevity noodles.

Before I share this traditional longevity noodles recipe, I have a favour to ask. Grantourismo is reader-supported. If you’ve enjoyed our recipes on the site, please consider supporting Grantourismo by using our links to book accommodation, rent a car or campervan or motorhome, buy travel insurance, or book a tour on Klook or Get Your Guide.

You could also shop our Grantourismo store on Society6 for gifts for foodies, including fun reusable cloth face masks designed with myimages or consider contributing to our epic Cambodian cuisine history and cookbook on Patreon.

Now let me tell you about this traditional longevity noodles recipe.

Considering the population of China and that of the Asian countries that celebrate Chinese New Year and Lunar New Year, the holiday is one of the largest celebrations in the world. It’s also one of the largest mass migrations, as so many Asians from across the region who have moved to cities for work or education, head home to towns and villages to spend the holiday with family.

The Chinese have always been great travellers – from the emissaries, merchants and seamen of ancient times to the young people who have travelled far to make their fortune and a better life to support their family back home. Non-Chinese have benefited from the rich culture those travellers have carried with them to their new homes, including their culinary culture.

I, for one, would have been all the poorer had I not have grown up in western Sydney, where every suburb had a Chinese restaurant or three, and dining out at our favourite was a Thursday post-late-night shopping ritual for my family when I was a child. No, it wasn’t all Russian food nor that nostalgic Australian food from the Seventies I’ve been sharing. 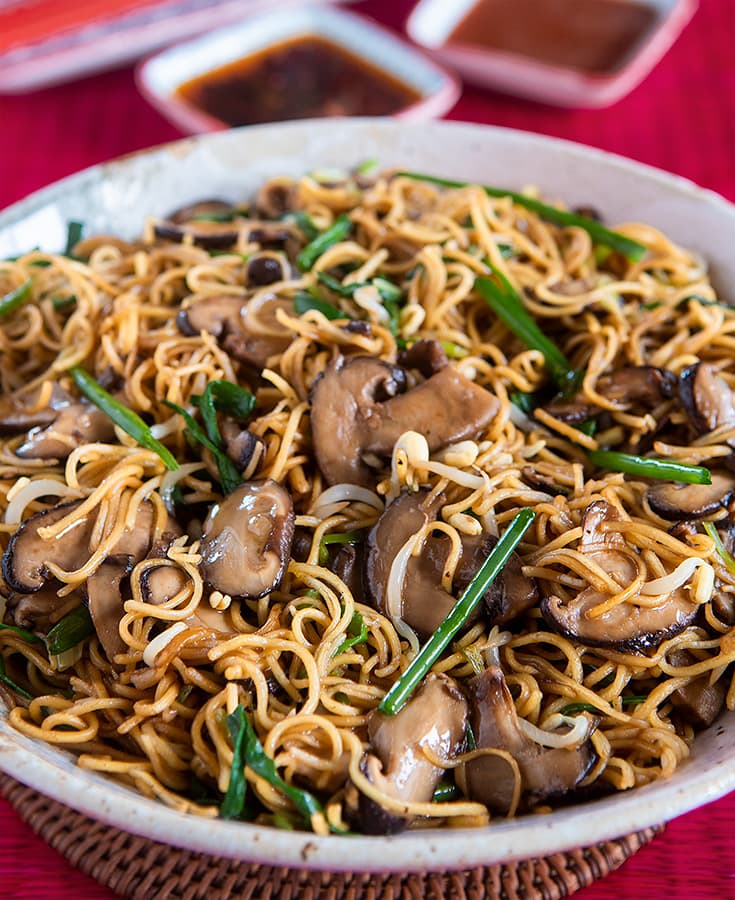 Okay, so I should say ‘Chinese-Australian’ restaurants, as the more we’ve learnt about Chinese cuisines during our time abroad, especially the last decade or so living in Asia, the more we’ve appreciated that dishes we thought were ‘authentic’ Chinese, aren’t necessarily considered so by Chinese in China.

But as we all now realise, ‘authenticity’ is such a loaded term, and while Chinese-Australian food – or Chinese-American, British-Chinese, Thai-Chinese or Chinese-Cambodian food – might not always resemble the food from ‘home’, it’s ‘authentic’ for its people, community and culture in their time and place. Which brings me back to this longevity noodles recipe. 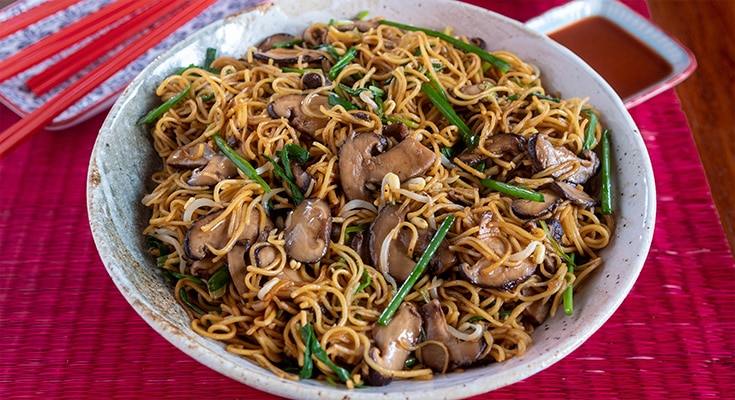 While this longevity noodles recipe is considered to be a classic and fairly traditional in many Chinese communities around the world, here in Cambodia longevity noodles tend to be plain when presented as an offering, with little else other than scallions/spring onions, chives and finely sliced mushrooms.

But after the offerings, when it comes to consuming this lucky dish later on in the evening or late afternoon, anything goes as far as condiments are concerned, and individuals might douse fish sauce, chilli sauce or chilli oil onto the noodles.

In Australia, a longevity noodles recipe might have included the addition of lap cheong (Chinese sausage), perhaps even prawns, and maybe snow peas. The amount of soy sauces and oyster sauce are often more generous, resulting in a richer tasting and darker noodle.

This longevity noodles recipe will give you something in between.

This is a super easy recipe, so my only tip is not to break the noodles, not when you’re boiling them, stir-frying them or eating them. Longevity noodles are also called long life noodles but if you break the noodles you’ll get bad luck and might not live as long as you hoped!

We buy a Singapore brand of longevity noodles here in Siem Reap produced by Hup Huat Noodles, supposedly to a recipe dating to 1930.

This brand of longevity noodles isn’t available on Amazon, but I’m sure you’ll find them or a similar noodle in an Asian market, specialty Asian grocer or a supermarket with well-stocked Asian sections. If you don’t have any luck, ask for yi mein, yi mian, yee mein, yee fu or e-fu noodles. Good luck!

Please do let us know in the comments below if you make this longevity noodles recipe as we’d love to know how it turns out for you.