This is the best Irish stew recipe for a deeply flavoured classic Irish stew with a rich gravy thanks to an easy roux – and half a bottle of Shiraz. Dishes don’t get more Irish than this traditional Irish stew, considered by many to be Ireland’s national dish, making it the perfect dish to cook for St Patrick’s Day.

We’re using St Patrick’s Day as an excuse to cook Irish food this week. Terence made a delicious breakfast colcannon with bacon and eggs for Weekend Eggs (you seriously need to make this for breakfast on St Paddy’s Day!) and today we’re sharing a classic Irish stew recipe for an incredibly rich and deeply flavoured traditional Irish stew, Ireland’s national dish.

While Terence is the one with Irish ancestry in this little family and Irish stews were part of his mother’s repertoire, I’ve taken on Irish stew duties this week as I grew up eating and later cooking Russian stews and I have to confess to having a thing about stews. Have you made my Russian beef stew?

If you’re also a stew lover, you’re going to adore this Irish stew recipe. It makes an incredibly rich Irish stew that’s deeply flavoured thanks to slow-cooking, half a bottle of Shiraz and an easy roux – melted butter and flour whisked with the stew juices to create a flavourful gravy that’s stirred into the stew. A roux is an essential component of a classic Irish stew, and indeed many stews.

We’ve got more Irish recipes coming over the next days, however, until then do take a look at Terence’s divine crispy salmon fillet with Irish colcannon with prawns. It’s based on a dish by Irish chef Liam Tomlin, who helmed Banc, which was one of our favourite Sydney restaurants before its closure, and it’s one of our favourite dishes. Terence has been making it for many years.

But before I tell you all about this classic Irish stew recipe, I have a favour to ask. Grantourismo is reader-funded. If you’ve enjoyed our recipes or other content on the site, please consider supporting Grantourismo. You could buy us a coffee and we’ll use that donation to buy cooking ingredients for recipe testing or contribute to our epic original Cambodian cuisine history and cookbook on Patreon.

You could also shop our Grantourismo store on Society6 for gifts for foodies, including fun reusable cloth face masks designed with my images. Now let’s tell you a little about this traditional Irish stew recipe.

This is the best Irish stew recipe for a deeply-flavoured classic Irish stew with a rich gravy thanks to slow-cooking, an easy roux and half a bottle of wine. Arguably Ireland’s national dish, a traditional Irish stew is mostly made with lamb these days, but historically, beef, which was considered ‘winter food’ was used in stews.

In A History of Irish Cuisine, Before and After the Potato, Irish academic John Linnane writes that in the period before Christianity, animal husbandry was the dominant food production and a man’s wealth was judged by the amount of cattle he kept. One archaeological study of 19,000 ancient bones identified 54% belonging to cattle, 36% to pigs and just 7% belonging to sheep and goats.

Beef was considered ‘winter food’ and dominated food production until the potato was introduced in the 17th century. Cattle were kept for milk, curds and other dairy products – which were known as ‘white meat’ and ‘summer food’ – until winter, when there was insufficient fodder for the animals, so non-breeding cattle were culled dramatically and salted to be used over the cold months.

The beef, which was typically tough, was cooked in a cauldron for many hours, to make beef stew, while calves were spit-roasted over an open fire. Blood pudding was also popular. While bread wasn’t eaten in large quantities, oat bread was broken up and used as a thickening agent, and added to beef stews and soups, as well as used to mop up the juices of the stews.

Linnane claims that there’s little evidence of vegetables being eaten other than onions used in stews until the 12th century, when chives, leeks, carrots and parsnips start to get mentioned and are used in stews. The Normans introduced peas and beans, then came turnips, all of which got thrown into stews. Cabbage and kale appeared, along with watercress and other water plants, and wild mushrooms were foraged and dried for winter – and all were used in stews.

The potato didn’t get used in stews and soups until the 18th century. Linnane writes: “…much of what is today regarded as traditional Irish cuisine – soda bread, apple tart, barm-brack, boxty, champ, colcannon, Irish stew, potatoes and bacon and Dublin coddle – ere only then being developed in the kitchens of the solid farming classes. From the early 18th century onwards no meal was considered complete without potatoes.” And I’ll tell you more about potatoes in the next Irish recipe post. 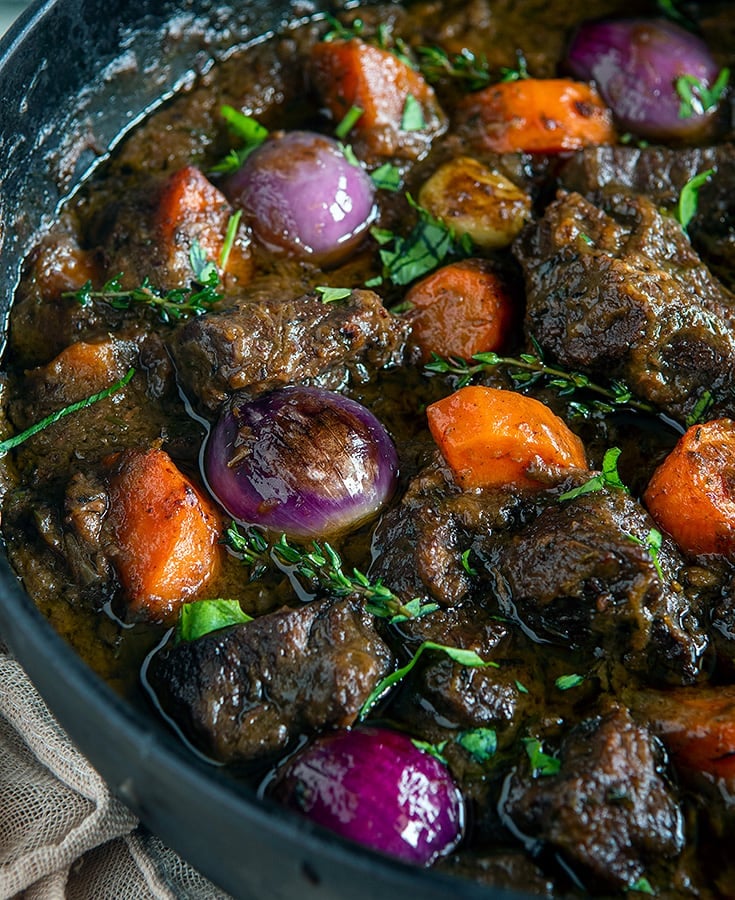 While you could certainly use lamb or mutton instead of beef in this Irish stew recipe, what can’t be substituted are root vegetables, such as onions, garlic, carrots, potatoes, and turnips. Take your pick! We’ve stuck to whole garlic, purple shallots (but any baby onions are fine), and good old fashioned carrots.

I’ve skipped the turnips, as we can’t get them here, and I’ve not used potatoes, because despite potatoes being such a quintessential Irish ingredient, there actually aren’t a lot of traditional Irish stew recipes that use potato, surprisingly.

There is an Irish stew recipe that uses the Irish dry stout beer, the best-known of which is Guinness, however, the older Irish stew recipes used red wine, which was traded with the Gauls, so I’ve gone with wine for this Irish stew recipe. Indeed, I’ve used half a bottle of a decent Australian shiraz, but any good medium- to full-bodied red would work.

Most Irish stew recipes call for a roux made with butter and flour that’s then added to some of the stew juices. It’s a quick and easy step and it results in an incredibly rich gravy that not only thickens the stew but adds a wonderful depth of flavour.

Don’t be intimidated by the idea of making a roux – it’s super easy – and follow recipes that call for simply adding flour to the stew as you risk creating a lumpy stew gravy that’s not at all pleasant to eat. Making the roux takes a few minutes, five minutes max, and is essential. 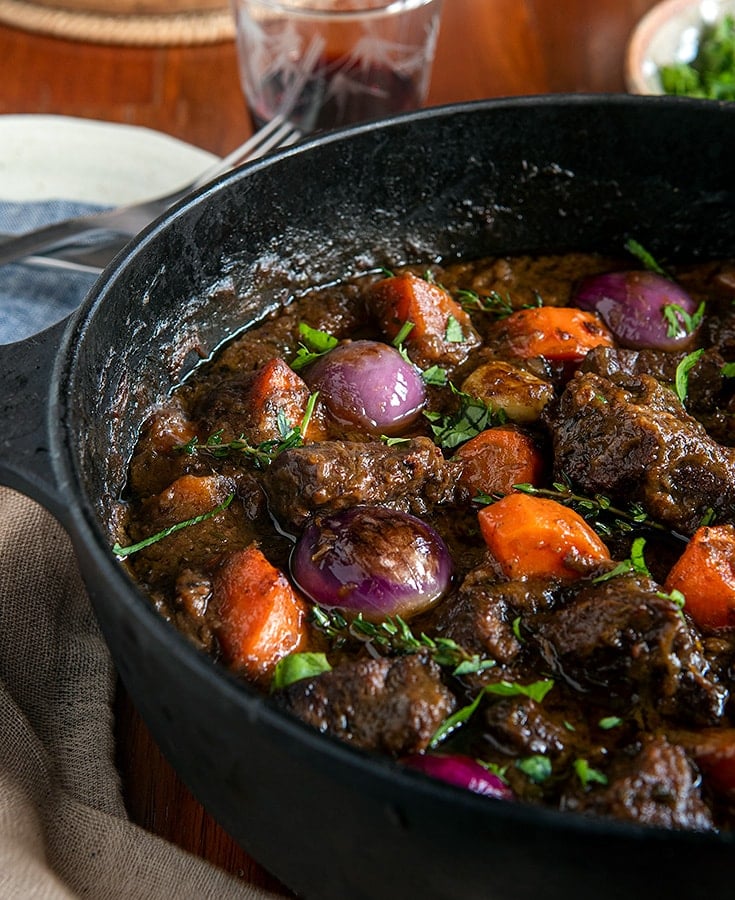 I only have a few quick tips to making our classic Irish stew recipe, starting with marinating the beef cubes in Worcestershire sauce and a good extra virgin olive oil. Many Irish chefs and home cooks marinate their meat in Worcestershire and there’s a reason: it works! It tenderises the toughest beef, resulting in fall-apart flavourful meat.

I have to make this stew with Khmer beef, as imported beef is so expensive. Khmer beef is incredibly tough, with little fat, as the cattle are so lean from spending their lives working in the fields, so I guarantee you this method tenderises the toughest meat. We always think that these dishes using the cheapest cuts means that you can spend more on the wine to go with it!

While I’ve recommended marinating the beef cubes for an hour, some chefs suggest up to two hours, however, no longer. The minimum duration is 30 minutes and maximum two hours, as beyond that time it loses its structure and just gets too soft, and you still want some texture and some chew.

Searing the beef is a given for most stews, not only Irish stews, as searing locks in flavour, however, not all stew-makers fry vegetables first. My dad used to just throw all the veggies in the pot. However, most Irish chefs recommend frying the vegetables separately first and then transferring them to the stew pot.

But by all means use whatever you usually make your stews in, whether it’s a big stew pot or deep skillet. For frying the vegetables, I use a round flat bottomed wok instead of a skillet or frying pan as it cooks everything much faster, but, again, use what you’re used to and prefer.

My Irish stew recipe calls for an absolute minimum of one hour for simmering but it’s called slow cooking for a reason. The longer you leave your stew on the stove the better. The stew you see in the images here simmered away for four hours, which is what made it the best Irish stew I’ve ever made.

While you’ll have a very delicious stew after an hour, if you have the time to leave the stew on for longer, do take that time. Put on some music, open a bottle of wine, do the dishes, and just take time to catch up with your loved-ones while your stew simmers on the stove and those wonderful aromas permeate your home. I’ll happily take four hours every single time to make this Irish stew recipe.

Please do let us know in the comments below if you make our classic Irish stew recipe as we’d love to know how it turns out for you.