This traditional Irish beef and Guinness stew recipe with cheese dumplings delivers a hearty beef stew made with Ireland’s beloved stout beer, with meat so tender you can pull it apart with a spoon and fork. It also includes a recipe within a recipe for savoury cheddar cheese dumplings that cook with the stew. Though you could serve it with mash or greens if you prefer.

Happy Saint Patrick’s Day! If you’re not spending the evening at your local Irish pub clinking glasses with your Irish mates, then at least drop by to pick up a bottle of Guinness or two and make this traditional Irish beef and Guinness stew recipe with cheesy cheddar dumplings.

If you haven’t visited us in a bit, we’ve been using the Irish holiday of Saint Patrick’s Day as an excuse to cook Irish food this week. Terence kicked off our Irish food week with a delicious breakfast colcannon with bacon and eggs for Weekend Eggs, which I guarantee will fix tomorrow morning’s hangover.

And if you’re staying in tonight for low-key Saint Paddy’s day celebrations at home, you could try Terence’s divine crispy salmon fillet with Irish colcannon with prawns, based on a dish by Irish chef Liam Tomlin, who helmed Banc, one of our favourite Sydney restaurants before its some closure years ago. Terence has been making it regularly ever since.

Or you could try our best Irish stew recipe, which makes an incredibly rich and deeply flavoured traditional Irish stew, arguably the national dish of Ireland. That Irish stew recipe is made with beef, which was ‘winter food’ in Ireland long before everyone started eating lamb, and a medium- to full-bodied red, such as Shiraz. The longer you cook it the better, but it will still taste heavenly after an hour or so.

Or you can make our classic cottage pie recipe, or this classic Irish beef and Guinness stew recipe with cheese dumplings, which cooks longer due to the dumplings, resulting in a pulled beef that’s so tender you can break it apart with a spoon and fork. Savoury cheddar cheese dumplings cooked with the stew are the traditional match, though if that’s too heavy for you, green veggies will lighten the dish.

Now, before I tell you all about this Irish beef and Guinness stew recipe with cheese dumplings, I have a favour to ask. Grantourismo is reader-funded. If you’ve enjoyed our recipes or other content on the site, please consider supporting Grantourismo. You could buy us a coffee and we’ll use that donation to buy cooking ingredients for recipe testing or contribute to our epic original Cambodian cuisine history and cookbook on Patreon.

You could also shop our Grantourismo store on Society6 for gifts for foodies, including fun reusable cloth face masks designed with my images. Now let’s tell you more about this Irish beef and Guinness stew recipe with cheese dumplings.

Our traditional Irish beef and Guinness stew recipe with cheddar cheese dumplings will make you a rich and hearty beef stew made with Ireland’s beloved stout beer, with meat so tender you should be able to pull it apart with a spoon and fork. This recipe includes a recipe within a recipe for savoury cheddar cheese dumplings that cook with the stew.

If you liked the traditional Irish beef stew made with red wine that I recently shared, then you’re going to love this Irish beef and Guinness stew recipe – especially if you enjoy stouts, those strong, top-fermented, dark brown beers that are so dark that they’re practically black.

Historically, any stout could be used to cook Irish beef stews, so by all means use your favourite stout if you have some fancy local craft-brewed stuff, however, Guinness is Irish, so there’s that, and it’s a reliably good dark beer, with a lovely tang and creamy barley flavour that is perfect for this stew.

Guinness is not only the best-known Irish stout globally, it’s the oldest Irish stout, first brewed in Ireland in 1759 by Arthur Guinness at his Guinness Brewery at St James’ Gate, Dublin, so it’s rich in history, which is what we love.

Guinness is also the most widely available stout globally, brewed in nearly 50 countries – since the 1880s in Australia – and distributed to over 120 countries, so you will have no problem finding Guinness wherever you are in the world. 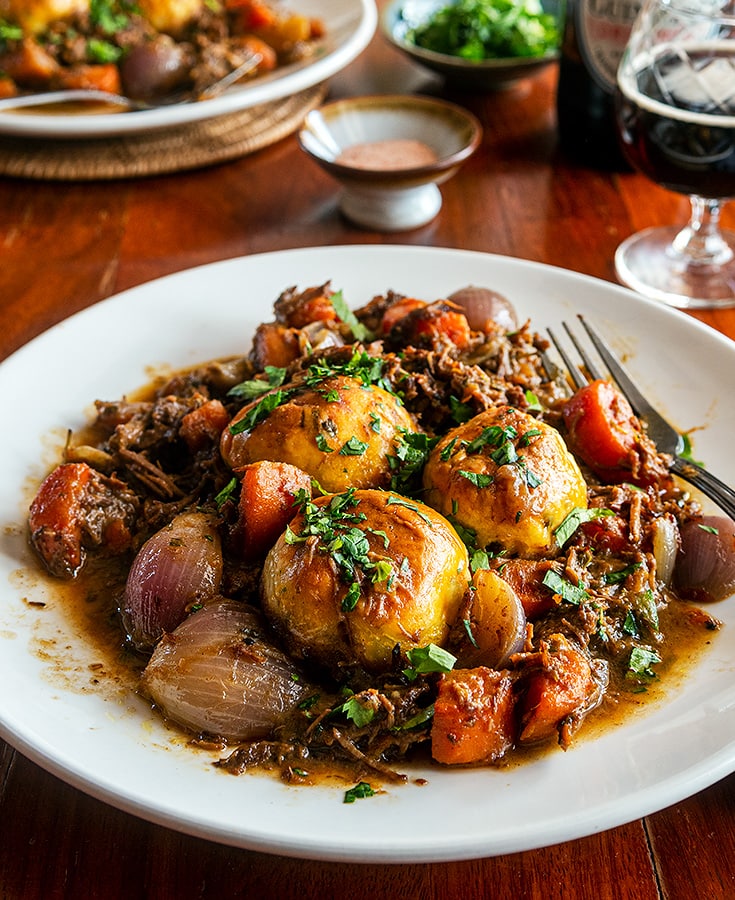 Aside from the inclusion of Guinness beer instead of red wine, the main differences between the deeply flavoured Irish stew recipe I shared yesterday and this Irish beef and Guinness stew recipe with cheese dumplings are some additional herbs and spices, a longer cooking time due to the dumplings, and those dumplings.

Cook them for the minimum time under cover and they’ll result in a soft-ish fluffy-ish dumpling, leave them longer and they’ll transform into a spongier and bouncier texture. Take the lid off as some chefs recommend – such as the Irish chef Donal Skehan, whose recipe was my inspiration – and continue to cook them until they’re golden brown, and they’ll form a crunchy top.

However you prefer to cook your cheesy cheddar dumplings, they’re there to provide contrast and texture and when sliced in half with soak up some of the juices and gravy of the stew. Give the dumplings a try if you’re new to them. If you don’t like the idea, mashed potatoes or green veggies are a perfect pairing.

If you’ve not tried this kind of dumpling before in Ireland or the UK, they’re more like northern European dumplings and have no resemblance to any kind of Asian dumplings, so get that thought out of your mind.

Just a few tips to making this traditional Irish beef and Guinness stew recipe with cheese dumplings. I’d love to know what you think if you make this. 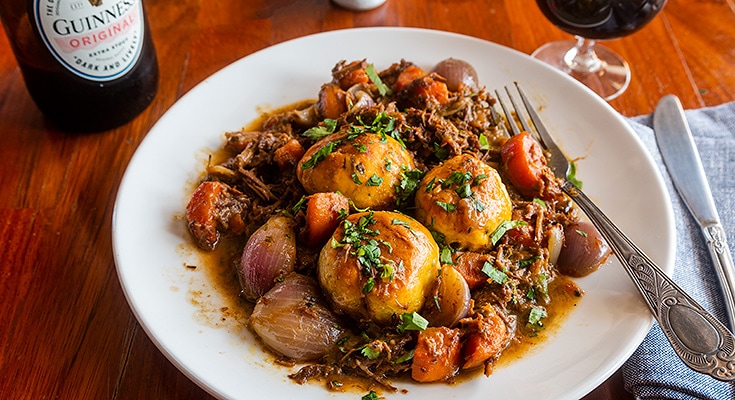 I only have a few quick tips to making this traditional Irish beef and Guinness stew recipe with cheese dumplings, starting with marinating the beef cubes in Worcestershire sauce and a good extra virgin olive oil. Many Irish chefs and home cooks marinate their meat in Worcestershire and there’s a reason: it works! It tenderises the toughest beef, resulting in fall-apart flavourful meat.

I have to make this stew with Khmer beef, as imported beef is so expensive. Khmer beef is incredibly tough, with little fat, as the cattle are so lean from spending their lives working in the fields, so I guarantee you this method tenderises the toughest meat. We always think that these dishes using the cheapest cuts means that you can spend more on the wine to go with it!

While I’ve recommended marinating the beef cubes for an hour, some chefs suggest up to two hours, however, no longer. The minimum duration is 30 minutes and maximum two hours, as beyond that time it loses its structure and just gets too soft, and you still want some texture and some chew.

Searing the beef is a given for most stews, not only Irish stews, as searing locks in flavour, however, not all stew-makers fry vegetables first. My dad used to just throw all the veggies in the pot. However, most Irish chefs recommend frying the vegetables separately first and then transferring them to the stew pot.

But by all means use whatever you usually make your stews in, whether it’s a big stew pot or deep skillet. For frying the vegetables, I use a round flat bottomed wok instead of a skillet or frying pan as it cooks everything much faster, but, again, use what you’re used to and prefer.

My Irish stew recipe calls for an absolute minimum of one hour for simmering but it’s called slow cooking for a reason. The longer you leave your stew on the stove the better. The stew you see in the images here simmered away for four hours, which is what made it the best Irish stew I’ve ever made.

While you’ll have a very delicious stew after an hour, if you have the time to leave the stew on for longer, do take that time. Put on some music, open a bottle of wine, do the dishes, and just take time to catch up with your loved-ones while your stew simmers on the stove and those wonderful aromas permeate your home.

Now, however long you decide to let your stew simmer for, when you think it only needs another 30 minutes, you need to add the dumplings to the stew, carefully spacing them on top so they’re not touching, and then put the lid on, and slide them onto a centre shelf in your stove.

See my notes above as to what the results will be depending on how long you cook them, but you want to aim for a minimum of 30 minutes and a maximum of 45 minutes. If you’ve never eaten this kind of dumpling before and you’re unsure, make some mashed potatoes or put some green veggies on!

Please do let us know in the comments below if you make our classic Irish stew recipe as we’d love to know how it turns out for you.