This hearty chorizo cabbage and three bean stew recipe makes my spicy take on a traditional Eastern European stew my Russian grandmother cooked that’s called kapustniak, kapustnyak or kapusniak in Russia, Ukraine and Poland. Originally made with kielbasa and sauerkraut, I use chorizo to add warmth and deep flavours, and three types of beans to add texture.

Like all good Russian grandmas, my baboushka had an impressive repertoire of hearty soups and stews. In autumn and winter, there seemed to always be a big pot of something bubbling on the stove, steaming up the windows in a kitchen that was always cold, and filling the house with mouthwatering aromas.

I think half the time I cook my Russian family recipes – and any cabbage recipes, as baboushka was always cooking cabbage! – I do it as much for a taste of the past and to provoke those memories of simpler times, as I do for a chance to savour baba’s delicious food, or something that resembles it. I’d give anything to be in that house again with my family tucking into bowls of baba’s stews and soups.

Now before I tell you more about my chorizo cabbage and three bean stew recipe for my spicy take on a traditional Eastern European stew, I have a favour to ask. Grantourismo is reader-funded. If you’ve enjoyed my Russian recipes, Cambodian recipes or any of our recipes on the site, please consider supporting Grantourismo by using our links to book accommodation, rent a car or campervan or motorhome, buy travel insurance, or book a tour on Klook or Get Your Guide.

Now let me tell you about my chorizo cabbage and three bean stew recipe for my spicy take on a traditional Eastern European stew.

My chorizo cabbage and three bean stew recipe makes an iteration of a traditional Eastern European stew or soup that my Russian grandmother had already tweaked to her own taste and made much heartier than the original, which often happens in diasporas.

While some of my baboushka’s specialties, such as borscht and shchi were readily identifiable and didn’t taste all that different to what we’d sample in Russia years later, some were no doubt of my grandmother’s own invention, others a slight resemblance to dishes I’d recognise on our European travels.

Called kapustniak or kapustnyak, this stew is typically lighter and more like a soup and was originally made with kielbasa and sauerkraut in Ukraine and Poland, both of which claim to be the source of a dish found all over Central and Eastern Europe. 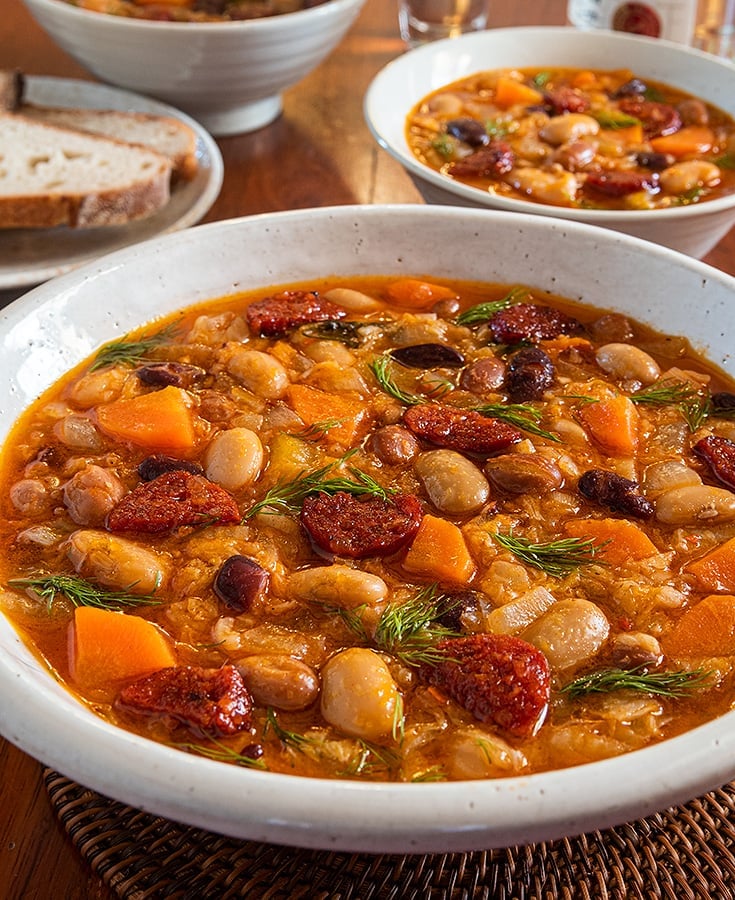 Now this is where I should clarify what I mean by kielbasa, which in Poland refers to numerous kinds of sausages. In Australia, it was used interchangeably to describe a long thin smoky Polish sausage called kabanos or kabanosy (plural) – or cabanossi in Australia.

My baboushka often bought kielbasa or kabanosy – kolbasa or колбаса in Russian – from a delicatessen in Blacktown to snack on with cheese and gherkins – and my grandfather often ate it for breakfast with a boiled egg, tomato, cucumber, black rye bread and a shot of vodka.

But baba used a spicier Hungarian-style sausage for this stew – one no doubt seasoned with smoky paprika – which I’ve gone and replaced with Spanish chorizo, for even more spice and colour and a greater depth of flavour. But I’m getting ahead of myself. Let me tell you more below in my tips to making this hearty chorizo cabbage and three bean stew recipe.

Just a few quick tips to making this hearty chorizo cabbage and three bean stew recipe. My grandmother sometimes used sauerkraut for this stew, which she’d either make herself or, in her later years, buy from the deli. She was never much of a supermarket shopper.

I’ve used fresh cabbage here, as I wanted to fry the cabbage in the spicy chorizo oil. But I will make my own sauerkraut and try that and report back. I’ve recommended white or green cabbage, but I also tried a Chinese cabbage we get here.

I’ve gone and added beans to this soup, which, frankly, I’ve never seen in Eastern Europe, just because I love the texture and flavour, but I’ve gone crazy and added three types of beans, each of which has a different flavour and texture. 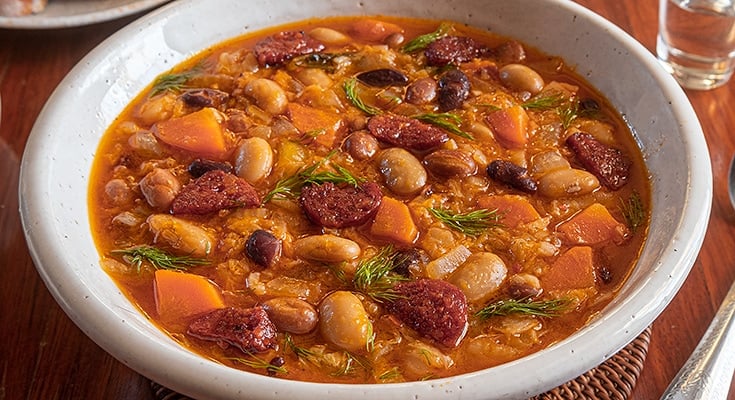 And feel free to throw all the cans in if you’re feeding a crowd. This stew will definitely keep in the fridge for a few days. You should also feel free to water this down and turn it into a soup rather than a stew if you are feeding a family or facing food shortages (damn you, pandemic). It’s often served in a thinner consistency in Europe.

You can easily make this stew in an hour, but by all means let it simmer on low for longer if you like, just not for too long if you like your veggies on the firmer side.

When you do serve it, provide more fragrant fresh dill for garnishing, and some dishes of homemade dill pickles and pickled cabbage, and sour cream, along with salt and pepper, and slices of rye bread or sourdough. A Russian garden salad is nice on the side and shots of vodka will warm you right up in no time.

Please do let us know if you make my hearty chorizo cabbage and three bean stew recipe in the comments below as we’d love to know how it turns out for you.