We had brilliant success spotting the Big Five on Kenya safaris, we’ve seen abundant wildlife in Australia’s outback when others claimed to have seen little at all, and we never have a problem attracting primates wherever we go, from Costa Rica to Borneo, but we have the worst luck when it comes to marine life.

Regardless, I was determined to go whale watching in Sydney and was secretly hoping to break our sea life-spotting curse.

It’s All About Expectations when Whale Watching

We saw nowhere near the numbers of dolphins usually seen on a dhow cruise through the dramatic ‘fjords’ of Oman’s Musandam Peninsula – so few the tour operator was so disappointed he sent us out again the next day with his crew, instructing them to ensure we spotted dolphins. We didn’t have much more luck (in fact it had been better the day before) though it was great to get out on the old dhow again and savour the mountain vistas.

We didn’t fare much better researching a guidebook in Australia a few years ago, when we seemed to be following the humpback and southern right whales’ journey along the Australian coastline on their annual migratory paths. Despite almost every town en route offering whale watching tours, we continually kept missing them – the whales had already moved on by the time we turned up. 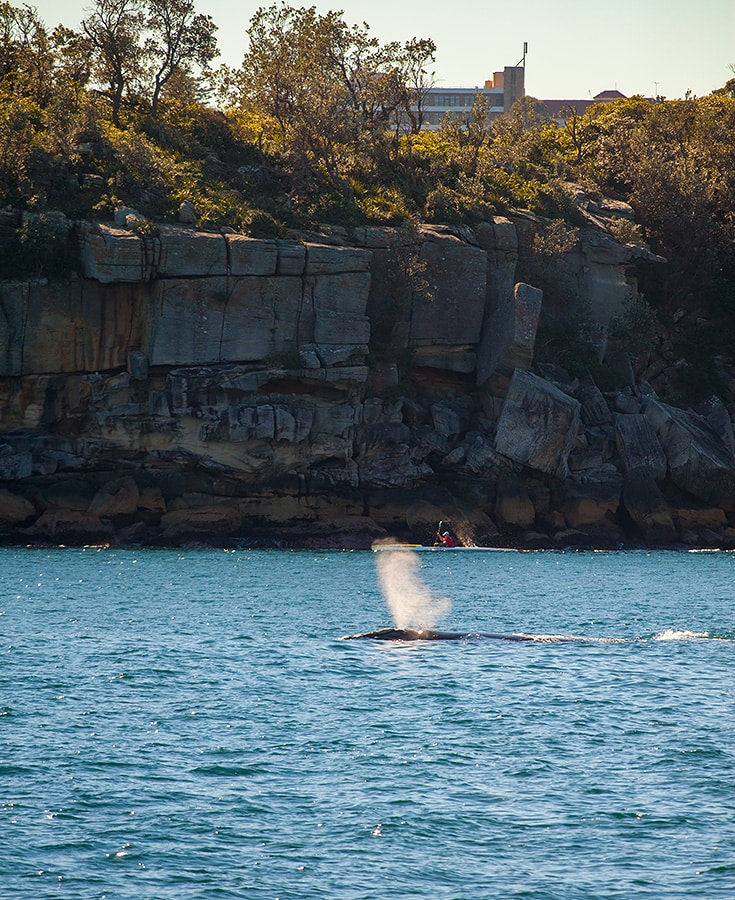 In northwest Western Australia at Monkey Mia, an area renowned for its rich sea life, local operators take tourists out on catamarans to see dolphins, dugongs, stingrays, loggerhead and green turtles, sea snakes, and whales. We saw some dugong, along with a few turtles, rays and dolphins, but not in the abundance we’d imagined that you see on National Geographic Channel. Though once again it was lovely to be out on a boat and taste the salty sea air.

I think that was the point when I adjusted my way of thinking and reigned in my expectations. With these sorts of tours, like most trips where nature (uncontrollable) and animals (unpredictable) are the focus, it’s all about expectations. To avoid disappointment, I decided, it’s better to have none – or at the very least, set my sights low.

During our recent stay in Sydney, we did some pet sitting for friends at their Paddington terrace house while they flitted off to Europe for five weeks. (And no, they aren’t travel writers; hence the word flitted.) One morning, the Wentworth Courier, a free local newspaper, arrived on our doorstep with an extraordinary image on the cover of a humpback whale breaching near the cliffs of South Head, the southern side of the entrance to Sydney Harbour.

Humpback whales are renowned for spectacular behaviour and breaching is when these monumental whales leap out of the water, and – like some lithe gymnast or diver a fraction of their size – turn and twist and roll in the air, their massive pectoral fins stretched out like wings, before crashing and splashing back into the sea. (Click here to see that amazing shot to see what I mean.) 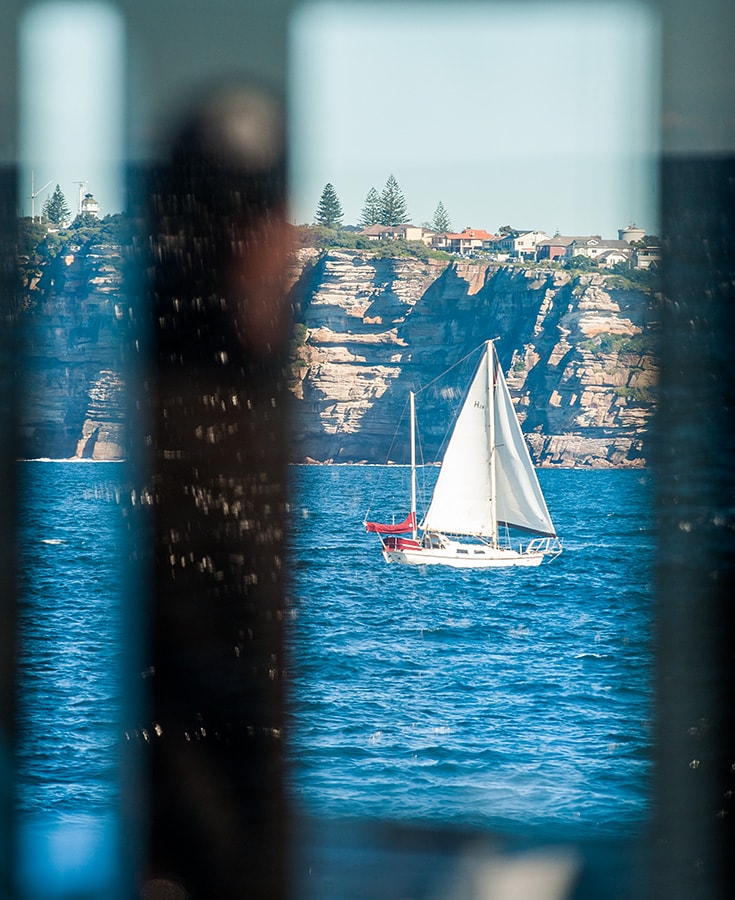 Somewhat serendipitously, we happened to be in town during whale watching season, which runs from June to November along the New South Wales coast, and right at the peak time in July when the whales stop in Sydney for a frolick in the waters (who can blame them?) before continuing their journey north to Queensland’s warmer sub-tropical waters. Between September and November they pass by again on their way back south to the Antarctic waters.

This year, it was estimated that there’d be a record number of some 15,000 humpback whales passing by – the figure has been increasing by around 8% every year – and around 100 mature southern right whales, which are on the endangered species list. Although as low as the figures are, it’s worth remembering humpback whales were close to extinction and the southern right whales had been hunted out in the 1840s and numbered as low as 10 a few years ago.

The Importance of Being Patient

On the morning the whale which had made the front cover breached, she did it not once, but ten times. The images were so incredible that I found myself a little envious not just of the opportunity to see a whale do that, but the chance to capture it in an image. Although I didn’t obsess about that aspect too much – I know from working alongside Terence how difficult wildlife photography is, how much time is needed and how patient you must be.

It turned out the photographer of that magical shot, Mark Seabury, a former fisherman and Bondi local, had been trying to take the picture that appeared on the paper for the past five years. We didn’t have that long. I decided I would be ecstatic if I just got a glimpse of a breach.

In the weeks following, I monitored the papers for more stories of the whales’ travels. Plenty of whales were being spotted off Sydney, in and around the heads, and even within the harbour. Ten had been spotted on one day alone. Some experts were saying it was the best year yet for whale watching. And not just ordinary whale spotting, these whales were doing wonderful things. 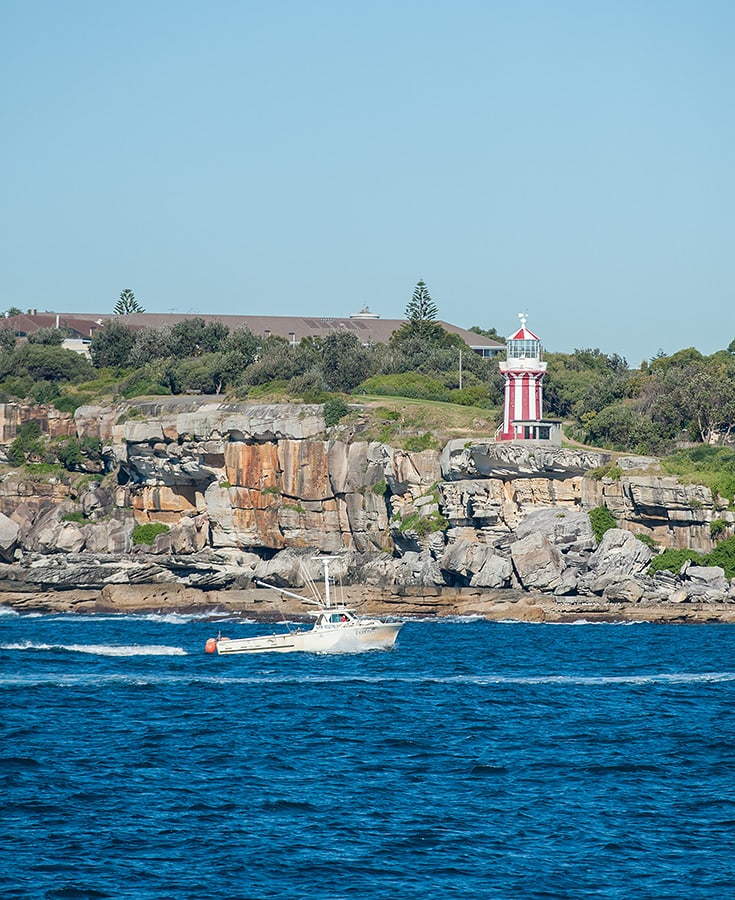 A southern right whale mother and newborn calf were reportedly being lulled by opera when they were seen frolicking right in front of the Sydney Opera House. The same whales were photographed five days later doing a bit of sightseeing on the Hawkesbury River.

If we were going to see some whales, surely now was the time – peak whale-watching season in the city where they seemed to enjoy playing at being tourists? We booked a morning tour with Captain Cook Cruises through Viator.

Now, there’s something I haven’t told you about my animal spotting abilities. I might not have had much success as far as marine spotting went, but I’ve demonstrated an uncanny knack to be the first in a group to catch sight of land animals and often spy them in the most challenging and uncommon situations.

Some situations have been so unusual I’ve surprised myself as much as the guides – from seeing koalas, animals that do a considerable amount of sleeping and camouflage themselves exceedingly well, hurriedly bound up a tree trunk or leap from the ground onto a tree, to noticing the elusive and threatened Nubian Ibex in Jordan’s Dana Reserve, precariously perched on a narrow rocky ledge the same shade as his pretty tan-coloured coat.

So when the Captain Cook Cruises guide doing the commentary announced after departing Circular Quay that there’d be a prize for the first person who spotted a whale (and in typical Australian-style, it was a free drink), I somehow knew it was my lucky day and it was going to be me.

Not twenty minutes later, as our vessel cruised by the cliffs beneath the old Quarantine Station, with one of the crew serendipitously by my side, not even certain of what I was looking for, I instinctively felt that a swirling movement I spotted on the water’s surface must be a whale.

At the exact moment the surface of the water appeared to part and the blow of vapour began to shoot into the air I excitedly shouted “whale!!!” and pointed in the direction of the action just as the whale ever so slightly began to reveal her glossy slate-grey head in a stealth-like movement known as ‘spy-hopping’.

The whale was a humpback, and there were two – a mother with her calf – and so the boat waited there for a while, manoeuvring slightly so passengers could see, while we all patiently watched, everyone photographing every single movement, however insignificant.

As the pair slowly swam beneath the cliffs, every now and again they sent a small spray of water into the air, like a single puff of steam or smoke rather than the dramatic jet I had imagined. Then, ever so slightly, their glistening heads would break the surface, and they’d have a look around before dipping below again.

We saw a little bit of ‘lob-tailing’, when the whale dives head down into the water and slaps its tail against the surface, but we saw nothing nearly as dramatic as a breach. We spent some time following the pair, taking care not to get too close and risk a tremendous fine, before the captain decided it was time to leave them alone and we headed out to sea in search of some action.

It wasn’t long before we spotted another pair, and we followed the same routine, this time capturing a bit more lob-tailing action, before shifting our location once more and heading further out and finally spotting the more solitary and rare southern right whale. That was a sight to treasure, as subtle as her movements were. Imagine if those monumental mammals are no more?

I won’t provide more detail than that, because the rest of the trip was really just more of the same. Some dramatic tension was added after the guide explained how to calculate how long the whale is beneath the surface to try to predict when she might rise again. But when she did, while I experienced a little thrill at seeing the colossal animal swimming so close to us, I have to admit it wasn’t nearly as exhilarating as I imagined.

Yet it was good to be out on a boat on such a beautiful day and it was great to get outside the entrance the entrance to one of the world’s most gorgeous harbours. I wasn’t disappointed about not seeing spectacular whale acrobatics or even whales being lulled by opera. On the contrary, I felt privileged to have seen what I did, I was chuffed I was the first to spot the whale, and liked the idea that perhaps I’d broken the curse.

As I sipped a glass of the sparkling wine I’d won on our way back to the Quay, I contemplated the trip. I could understand how people like Mark Seabury could take up photography and wait every day of the whale watching season for the chance to see something as fantastic as a breach and capture it for the world to see. While I don’t have the patience to make it my life’s work, I would have very happily gone out whale watching again.

Details and Tips for Whale Watching in Sydney