Puglian pizza making is a two stage process over two days, we learn when I get lessons in making homemade pizzas in the wood-fired oven attached to our trullo just outside Alberobello in Italy’s southern region of Puglia.

Maria, as you might remember, is the caretaker of our trullo who has quickly become my cooking instructor and our friend. When she came to teach me a little home-style Puglian cooking, Maria not only taught me how to make fresh handmade orrecchietti, she also began a two-stage lesson in how to use our forno a legna or wood-fired oven to make Puglian pizza.

Puglian pizza, we also learn, is really just classic southern Italian pizza with local ingredients – many from Maria’s own farm. 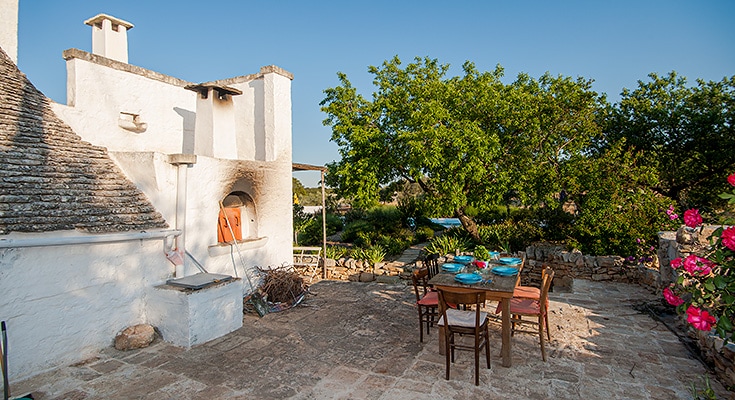 On the first day, Maria taught me how to make the base for the Puglian pizza that she was going to teach me how to cook the next day. Why the next day? Two reasons.

Firstly, the pizza oven, which is rather ingeniously built into one of the exterior walls of our trullo, had not been fired up in several months, so the stones of the oven needed a long time to warm up again. 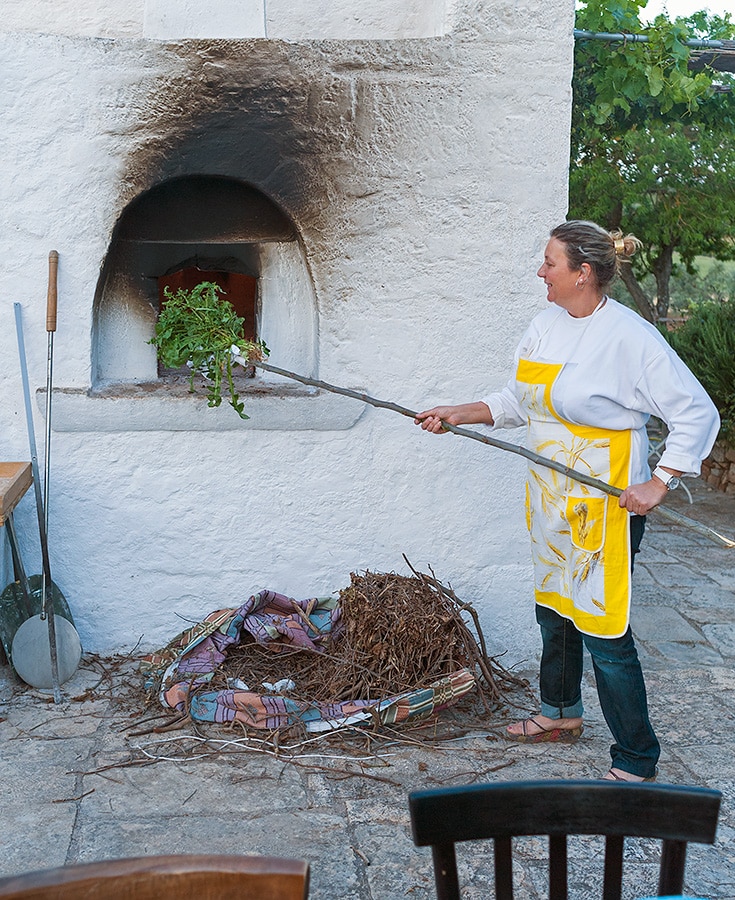 Secondly, Maria needed to make the yeast base of the pizza on the first day, then combine that yeasty mix with more flour on the second day to make the final pizza dough.

How to prepare a woodfired pizza oven or forno a legna

On the first afternoon, Maria and her son Giuseppe cleaned out the pizza oven before stacking it with some very dry olive tree branches. This was more than just kindling though. When it went up in smoke, it really warmed up the oven, getting it very hot very quickly. Even so, Maria said it would be much better the following day.

The next afternoon when Maria turned up, the oven was still warm, yet the same amount of olive branches was added to the oven to crank up the fire again. Usually, residents of trulli make their own bread, foccacia and pizzas every couple of days so the ovens never really cool down.

Once several stacks of the olive branches had been burnt, Maria added the logs that would raise the intensity of the heat even more and maintain the temperature of the oven at a very high heat – about twice the maximum of a conventional oven, which is why pizza cooks so quickly in a forno a legna (wood-fired oven).

I usually make pizzas in a conventional oven, using a pizza stone that is heated up in the oven for about an hour before you start making the pizzas, and I get good results.

But there is something so primal about using a wood-fired oven – especially outdoors – that adds to the sense of making something special. The inferno that is created means the pizza cooks faster, has less chance of having a soft and gooey centre, and the flavour of the wood gives the pizza a smoky flavour you can’t achieve any other way.

Once the oven was deemed hot enough, Maria swept the ash from the floor of the oven with cherry branches tied to a long branch to create a rustic ‘broom’. 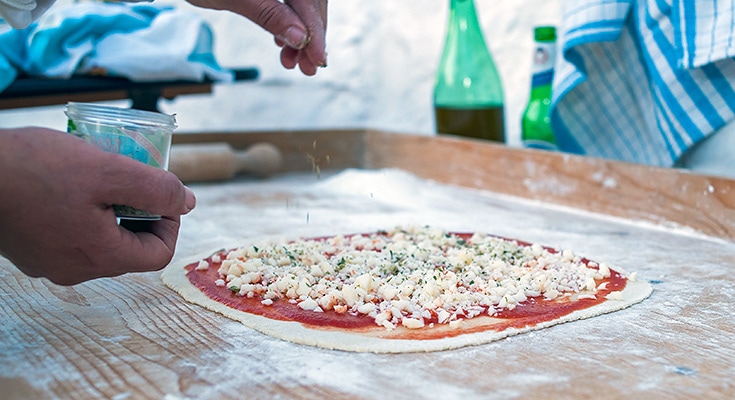 When it was time at last to test out the pizzas, Maria mixed a passata of fresh tomato sauce, olive oil and salt, which she spread liberally onto the pizza bases.

This she topped with cheese and, as we asked for toppings that were traditional to the area, she added grated mozzarella to one, and anchovies and olives to another.

Each pizza took about 4–5 minutes in the oven and every single one was an absolute delight – piping hot, crispy, fragrant, flavoursome, and so incredibly fresh. 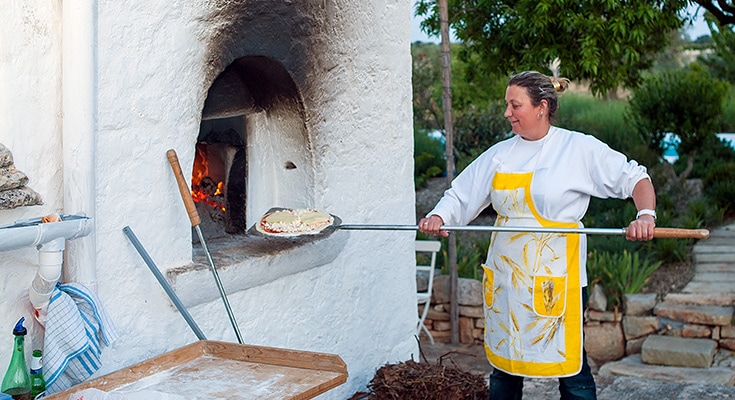 Later, when Maria’s sons and husband arrived for dinner they shouted out their personal orders from a table we set up outside by the pizza oven: prosciutto, peperoncini, mushrooms, vegetables, quattro formaggi (four cheeses), you name it… although never altogether of course!

No matter what they ordered, Maria would have the pizza prepped, in and out of the oven, and on a plate five minutes later.

Is there a better fast food? Or a better way to sample local fast food than have it made in an oven in the wall of your home? I don’t think so. 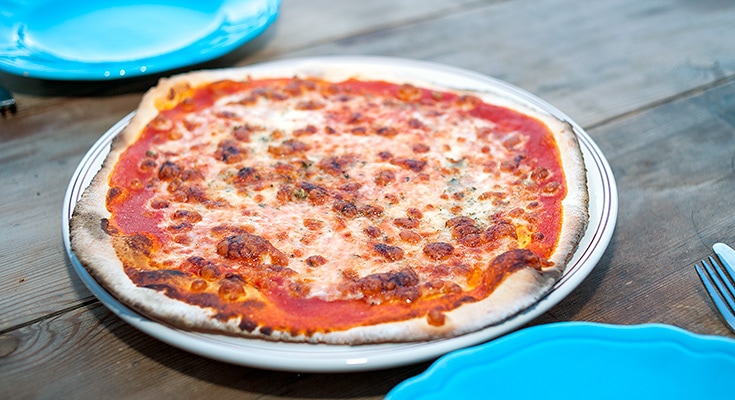 In the end we  contributed to what turned out to be a very memorable family feast.

I made a Spaghetti alla Puttanesca that went down a treat. Every family member cleaned their plates and after polishing his off completely young Domenico asked Maria why she didn’t make the dish at home! Lara also made a simple pomodorini and basilico salad using a local fresh cheese and Maria’s sublime olive oil.

Being able to learn to cook local dishes from locals is a real privilege, but having the opportunity to entertain and also cook for them, and then find that they enjoyed our contribution nearly as much as we enjoyed their food is an added bonus.

Oh, and after the pizza, Maria served up some succulent barbecue pork she made. There was nothing we could offer to match that! 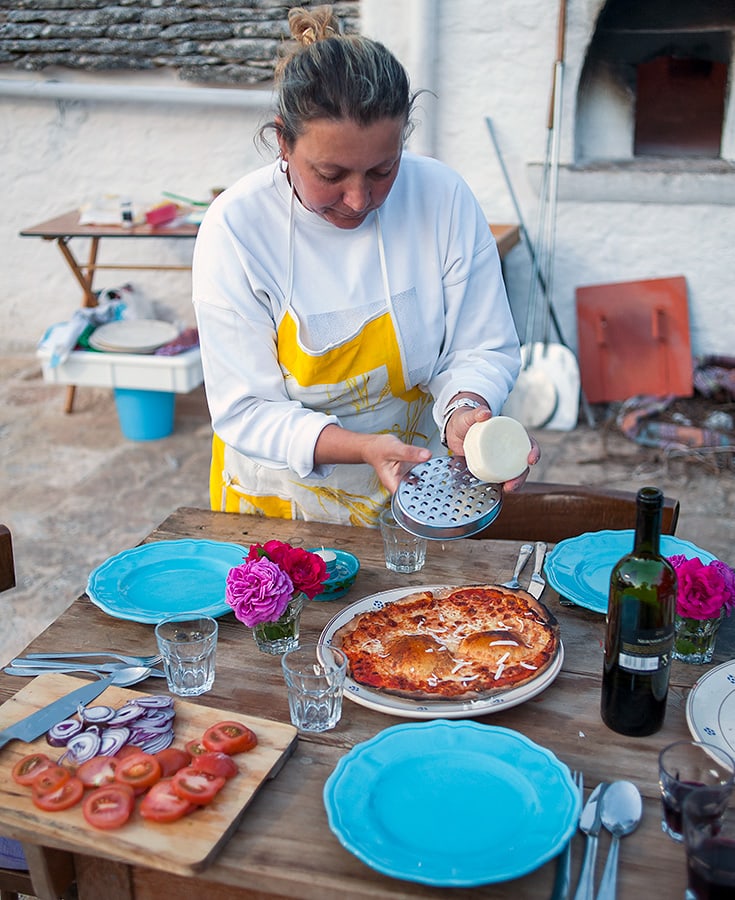