Italians joke that in Italy tax evasion, not soccer (football), is the number one national sport – a quarter of the Italian economy apparently avoids paying taxes. So it wasn’t so surprising to find out that Puglia’s trulli, the traditional, white, conical houses that dot the Puglian countryside, were a product of this pervasive practice. But as we also learned, the enchanting trulli have an imperceptible quality that’s impossible to place a value upon.

It was on an amble around the fairy-tale town of Alberobello with Anna, a local guide from the area, and Maria, the caretaker of our trullo, that we learned about the inimitably Italian history of these particularly Puglian dwellings. Although there are a few theories floating around about the origin of the unique architectural design… 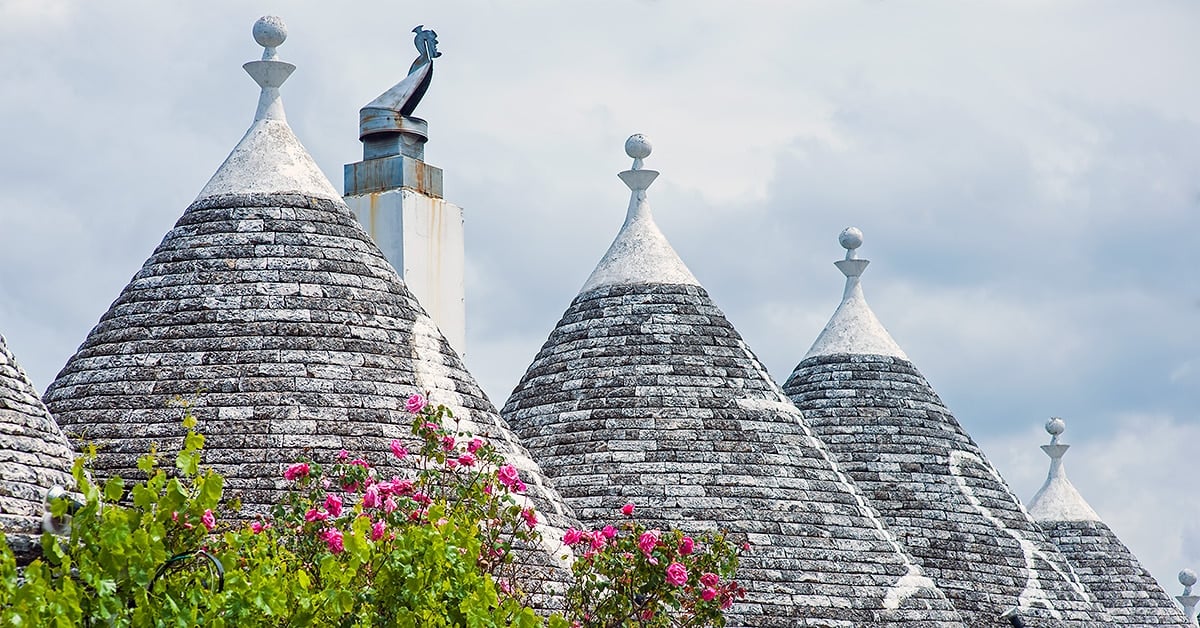 Josep, an old farmer we met who lives in a rustic antique trullo with a yard full of chickens and dogs, surrounded by fields blanketed with wildflowers, says that the trulli were an ingenious idea of the people themselves. Josep believes that the Puglian people, who were meant to pay taxes on their residences, moulded the clever dry wall structure into a shape “that was something, but not a house,” so that the buildings could quickly be dismantled if the King sent tax inspectors their way.

According to Anna, it was the rulers of Alberobello, the Counts of Conversano, who ordered the people build trulli from dry stone and in a conical shape so that the Counts could avoid paying taxes on the buildings on their land to the King of Naples. Their thinking was that, if discovered, their strange form might conceal their use as residences, while the lack of mortar and conical shape meant that they could quickly be destroyed.

In the late 15th century, when the trulli were first built, it was unlikely that they’d be discovered, as the Counts were only just beginning to populate the area with people from the forests who they had recruited to cultivate the untamed land. However, once people moved in from other villages, and the population increased, and the agriculturally rich region became known, the King decided to send in a team of investigators. Locals believe that the Count found out about the King’s plans in the knick of time and had all the trulli knocked down. 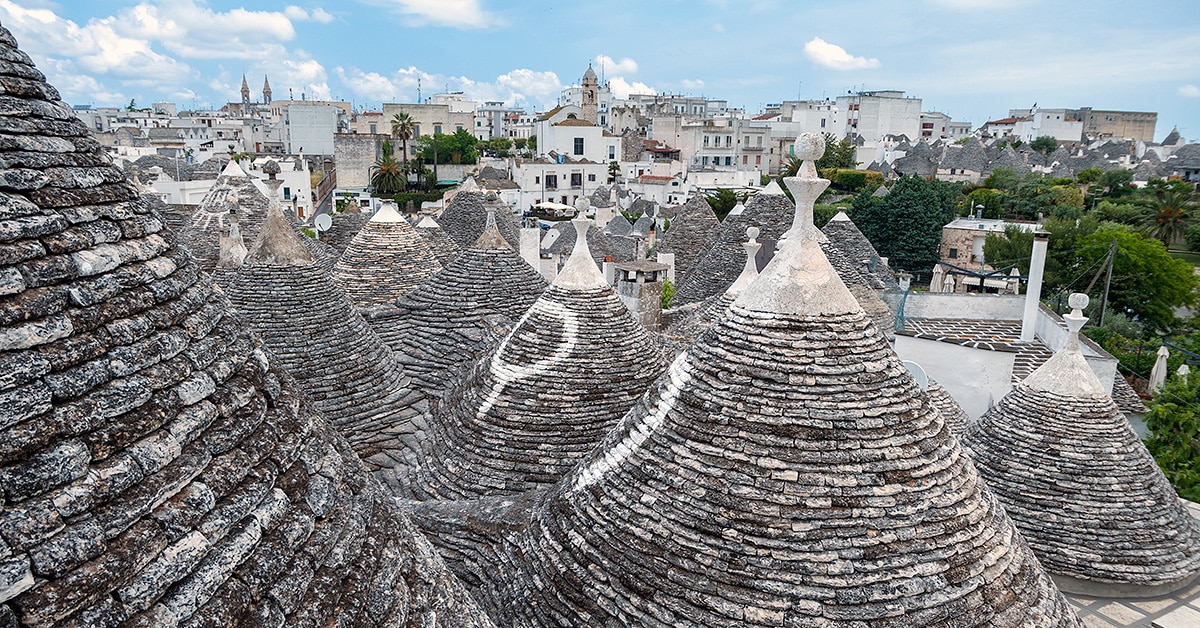 By the 17th century, somewhat invisible and unprotected by their feudal lords, the locals were no longer happy with their lot – and can you blame them? – so when King Ferdinando IV passed through in 1797, they asked him to assess their situation. He did and he made Alberobello a Royal Town, and one eligible to access certain benefits, and from that time onwards, more permanent trulli were built with mortar and lime.

In Rione Aia Picola, the ‘small barnyard district’, the first area we explore on our walk, Anna explains that the tightly packed, whitewashed trulli were once inhabited by farmers. There are still some 400 trulli and 1500 residents in this not-so-everyday local neighbourhood. Here, flower pots sit prettily in the tiny window sills, lace curtains are closed to keep out curious eyes, washing lines strung between trulli sag with clothes fragrant with soap powder, and we hear the occasional television set blaring inside.

Anna reveals that some trulli aren’t permanently inhabited. As the size of families grew, along with their affluence, people temporarily move into larger homes in the main part of town, maintaining their medieval trullo for when friends visit, for weekends away, to rent to tourists, or for a more permanent move come retirement.

One old man we meet in this quaint neighbourhood, now well and truly retired, spends his days at his tidy little trullo, returning to his conventional home and family in the evenings. His small kitchenette is bare except for a kettle to make tea, a few provisions for snacks, and a cat and her newborn kittens in a cardboard box to keep him company. He keeps the trullo door open and when he’s not welcoming tourists for a chat and look around, he spends his time watching television. He says he much prefers living in his trullo to his modern home and plans to move back permanently soon.

We wander through the heart of Alberobello, across the attractive square and behind the town’s splendid cathedral, to see the Trulli Sovrano or Sovereign Trulli, the most impressive structure in town, and the town’s only trullo with two storeys. Built in the 18th century for the local priest it’s now a museum that holds religious relics.

On the gentle hill opposite the main part of town is the Rione Monti or the Mountain District, which is home to 1030 charming trulli and 3000 residents, along with a ‘Siamese trullo’ and a grand 20th century trullo-shaped church. This perfectly preserved quarter, the older of the two neighbourhoods with trulli dating back to the 16th century, is what earned Alberobello its status as a National Monument a century ago, and its designation by UNESCO as a World Heritage Site.

This is where thousands of tourists and school children pour out of buses each day, and every second trullo doubles as a souvenir shop, café, restaurant, or B&B. Washing still hangs on clotheslines but the pot plants are better tended and the trulli here obviously receive more frequent coats of paint.

While Alberobello’s trulli receive all of the attention, trulli are scattered right across the Valle d’Itria or Itria Valley of Puglia, as we see on our drive to Maria’s home for lunch and our visit to see old Josep’s home later in the afternoon. Trulli can also be found in the towns of Locorotondo, Martina Franca, Fasano, and Cisternino, and they’re used for myriad purposes: family homes, farmhouses, barns, storehouses, garages, country refuges, and of course, holiday homes. Traditionally built without cement or mortar, these days the trulli are much more solid, and many of the antique dwellings now boast modern additions and swimming pools. 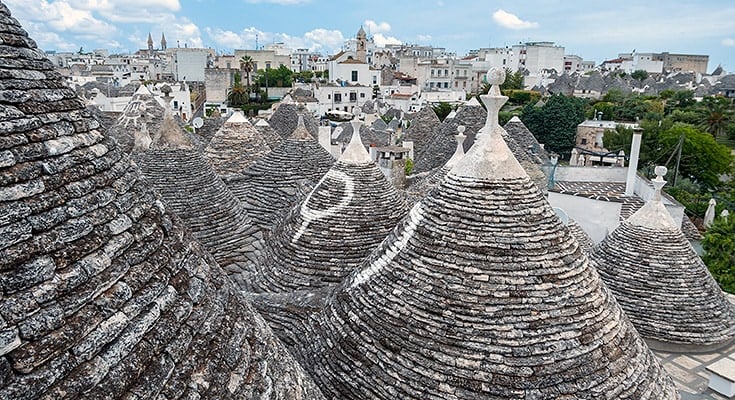 When Alberobello was added to UNESCO’s World Heritage List it was “to be protected and preserved as unique and exceptional marks of a disappeared civilization and cultural tradition, offering an example of building techniques relative to a meaningful historical moment, constituting an example of human dwelling representative of a culture”. Ironically, the trulli have hardly disappeared, with crumbling buildings being rebuilt and restored all over the countryside. In fact, living in a trullo has never been more popular.

On the drive to Maria’s, she points out which trulli are owned by locals and how old they are, which ones are foreign-owned, and which ones are being restored or built in a modern style by newlyweds, for whom living in trulli is not only fashionable but smart. Why? Trulli are eco-friendly and affordable, Maria assures us, as heating and air-conditioning are minimal compared to modern homes.

The whitewashed exteriors of the trulli reflect the sun while their thick walls keep the interiors cool in summer, reducing the need for air-conditioning. In winter the walls insulate the houses, which are heated by fireplaces, kitchen stoves, and exterior wood-fired ovens. Trulli have very few windows, and the windows they have are miniscule, to help maintain the temperature. Maria tells us she knows these things because her husband is a traditional stonemason.

While the trulli are thought to be a medieval invention, conical building techniques are ancient, their structure evolving from the primitive hut, and there’s evidence of similar buildings in Crete and Mycenae. There is also evidence at archaeological sites in Alberobello proving that the area was inhabited in the Neolithic Age and that the Cretans or Mycenaeans had migrated here as far back as the 13th century BC.

The most distinguishing feature of a trullo is its conical shape created from concentric rings of stone. The oldest trulli were cone-shaped from the ground up, although there are few of these intact, while the ‘newer’ trulli dating from the 17th century onwards had a base to support the roof. Constructed in two layers, the roof boasts an inner layer of limestone rocks and an outer layer of limestone slabs to ensure the building is watertight. While the base was traditionally painted with lime, the roof was left bare to enable the rainwater to flow off easily.

On the drive home with Maria she spots some renovation work going on at a trullo near ours, and stops to take a look. The ancient houses often had irregularly cut and placed stones, with the more ordered stones being a sign of a modern trullo, however, Maria assures us this one is indeed very old. Being something of a trullo connoisseur, she points out the fastidious placement of the bricks – and no mortar! It’s artfully designed. We’re very impressed.

Some trulli have just one conical roof and beneath it an open-plan style room, with alcoves that were traditionally used for sleeping and drawn with a curtain for privacy. In modern homes these have been expanded into proper bedrooms to meet the family’s growing needs whereas traditionally a wooden mezzanine would have been built into the largest cone for the children to sleep on or as storage space. There are also multi-roofed trulli boasting a number of rooms, such as the one Anna’s grandparents and great-grandmother live in. Interior features include arches, niches, built-in ledges, shelves, and seats, and focarili or fireplace rooms used for cooking. Outside there are usually built-in seats either side of the door, and a gutter that channels rainwater to an underground well. 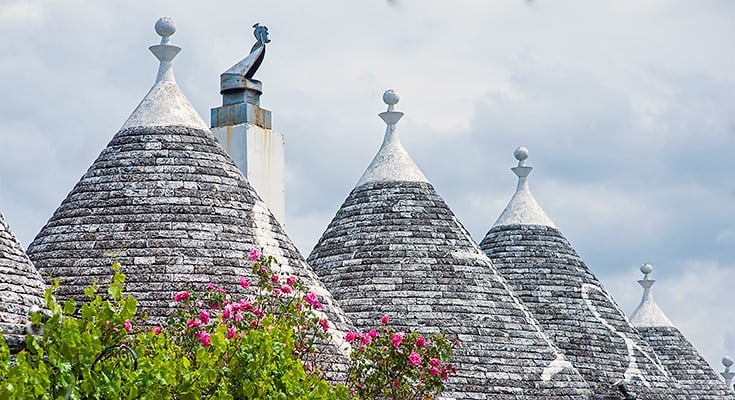 On our stroll with Anna, she points out the pinnacles that sit atop the cones. Although the pinnacle has a structural purpose, locking the last layers of the concentric circle of stone in place, it’s decorative as well as symbolic, with different towns boasting different styles selected for their symbolism. Likewise, some roofs are painted with white symbols, such as crosses, crescents, geometric shapes, stars, astrological symbols, and even evil eyes or malocchio, and have primitive, pagan, magic, or religious meaning. The roof of Maria’s trullo, aptly, has a tree of life.

Many people believe that the trulli have magical powers. Josep explains that he bought his trullo 30 years ago when he decided to dramatically change his life, although he never does reveal what he did in his former life. Josep believes the trulli are anti-seismic and links their form to the ancient pyramids. “They have a very good energy,” he tells us, his eyes twinkling. Having now lived in a trullo ourselves, we have to agree.