This German meatballs recipe makes deliciously tender meatballs in a delightfully tangy caper gravy that are traditionally served with buttered parsley potatoes. You could also serve these melt-in-the-mouth meatballs with creamy mashed potatoes in winter or with coleslaw or a crisp garden salad in summer. Don’t let a little warm weather stop you from tucking into these tasty flavour bombs.

Hold your tongues until you taste these melt-in-the-mouth meatballs. They may not be the most attractive meatballs – they’re not seared brown from pan-frying, nor smothered in a luscious tomato sauce, nor swimming in a creamy mushroom gravy – but the term ‘flavour bomb’ was obviously invented for this meatball. If you’re a meatball lover (more meatball recipes here for you), you’re going to love these.

This classic German meatballs recipe for Königsberger klopse makes a meatball that’s so tender it will melt in your mouth, with subtle umami flavours thanks to the anchovies, a tanginess courtesy of the capers, and zingy citrus due to the lemon zest, all balanced out by the sweetness of the onions and creaminess of the light onion gravy.

But before I tell you more about this German meatballs recipe for Königsberger klopse, I have a favour to ask. Grantourismo is reader-funded. If you’ve enjoyed our recipes or other content on the site, please consider supporting Grantourismo. You could buy us a coffee and we’ll use that donation to buy cooking ingredients for recipe testing or you could contribute to our epic original Cambodian cuisine history and cookbook on Patreon.

You could also shop our Grantourismo store on Society6 for gifts for foodies, including fun reusable cloth face masks designed with Terence’s images. Now let me tell you all about this German meatballs recipe and a little about the history of Königsberg and Prussia.

This German meatballs recipe for Königsberger klopse is a very old recipe dating back to the Middle Ages, although the East Prussian name ‘klops’, which meant ‘meat dumpling’ didn’t come into existence until later so they were probably called ‘minced patties’ or ‘meat rissoles’ instead.

If you’re not familiar with the long, complicated history of Prussia and Baltic Europe, let me try to condense it as it’s key to understanding how these East Prussian meatballs became German meatballs. If you don’t find history fascinating and just want some tips on how to cook this German meatballs recipe for Königsberger klopse, then scroll down to the Tips section.

In a nutshell: the Prussians – also called Old Prussians and Baltic Prussians – were an indigenous Baltic tribe whose homeland of Prussia extended from the south-eastern Baltic Sea to the land we now know as Poland. The name ‘Prussian’ or ‘Prūsas’ (a Prussian person) is said to be derived from the name for a body of water – the sea or a lake – so essentially they were ‘the people of the waters’.

Archaeological evidence confirms the Prussians’ uninterrupted presence there from the 5th century BC until the beginning of the Migration Period. Around the 10th century the Polans (present-day Polish), who had no access to the sea, attempted to conquer the Prussians, with the help of Kievan Rus (modern-day Ukraine, Russia and Belarus), but failed.

And despite successive attempts to conquer their lands, it would be another 300 years before the Old Prussians were conquered, in the 13th century by the Teutonic Order, the Central European Catholic medieval crusaders, before being occupied by Germanic tribes, who were expanding eastwards.

The Prussian peoples gradually became assimilated into the various German states and by the 17th century their language became extinct and along with it much of their culture. 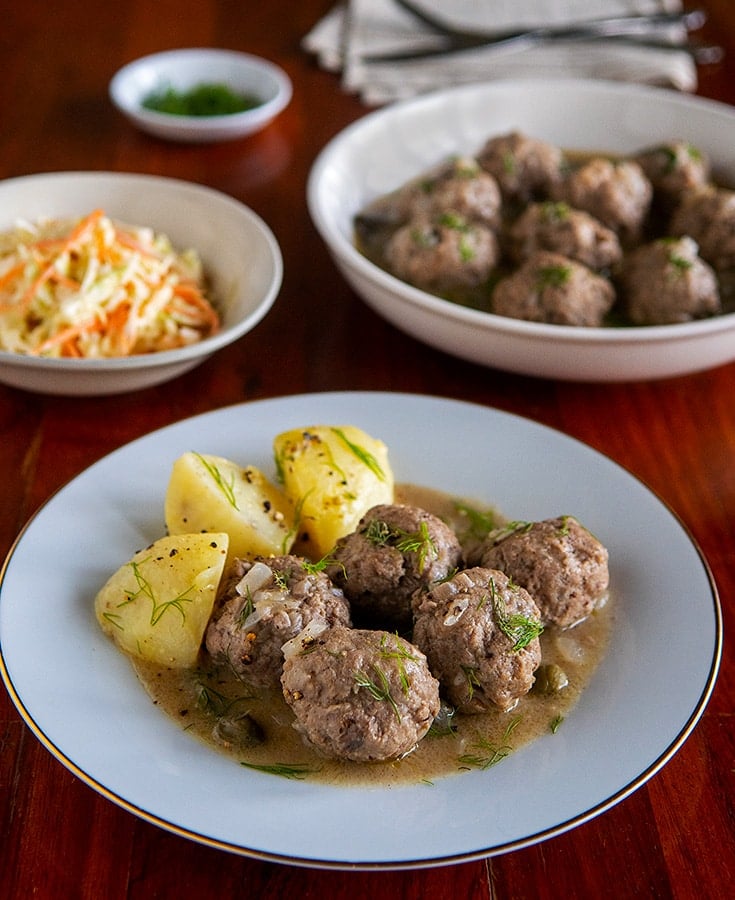 Following the defeat of the Nazis in 1945 at the end of World War 2, poor war-torn East Prussia, which had been devastated by bombings by the British and American allied forces, was divided between Poland, the Soviet Union and Lithuania – all of which is to explain how East Prussia became part of Russia and Königsberg was renamed Kaliningrad in 1946.

And what happened to the Germans of East Prussia? Some 300,000 people are thought to have died during the World War 2 British bombing raids, at the hands of the Red Army, or from cold, hunger, disease, while the Germans who survived were expelled from East Prussia, as they had been expelled from all Eastern and Central European countries – a proposal by Winston Churchill to reverse Germany’s earlier eastward expansion.

While these delicious Königsberger klopse continue to remain a specialty in their renamed birthplace, Kaliningrad, where they still appear on many restaurant menus, the centuries-old East Prussian meatballs also travelled back to Germany with returning Germans, becoming known over a relatively short period of time as German meatballs.

Just a few tips to making this German meatballs recipe for Königsberger klopse.

This German meatballs recipe for Königsberger klopse is a variation on the classic recipe with just a few tiny tweaks. Let’s start with the meat. Long made with ground veal, they’re typically made with ground beef and ground pork these days, which is also my preferred combination for meatballs.

Cream in the gravy is another inclusion in most recipes, although I think the roux makes the gravy creamy enough as it’s meant to be a light gravy, but feel free to add cream at the end: 100ml should do it. Parsley was traditionally used, but I’ve opted for fresh dill instead. That’s about it for the tweaks. Back to the meatballs.

Always taste the meat mixture before making the meatballs, so there are no surprises. Just take a small amount of the minced mixture and either pop it in the microwave or fry it. If it tastes under-seasoned to you, add a little more salt or white pepper.

I highly recommend using kitchen scales to weigh each spoon of minced meat mixture before shaping it into a meatball so that they’re uniform in size. They not only look nicer, but they’ll cook more evenly. 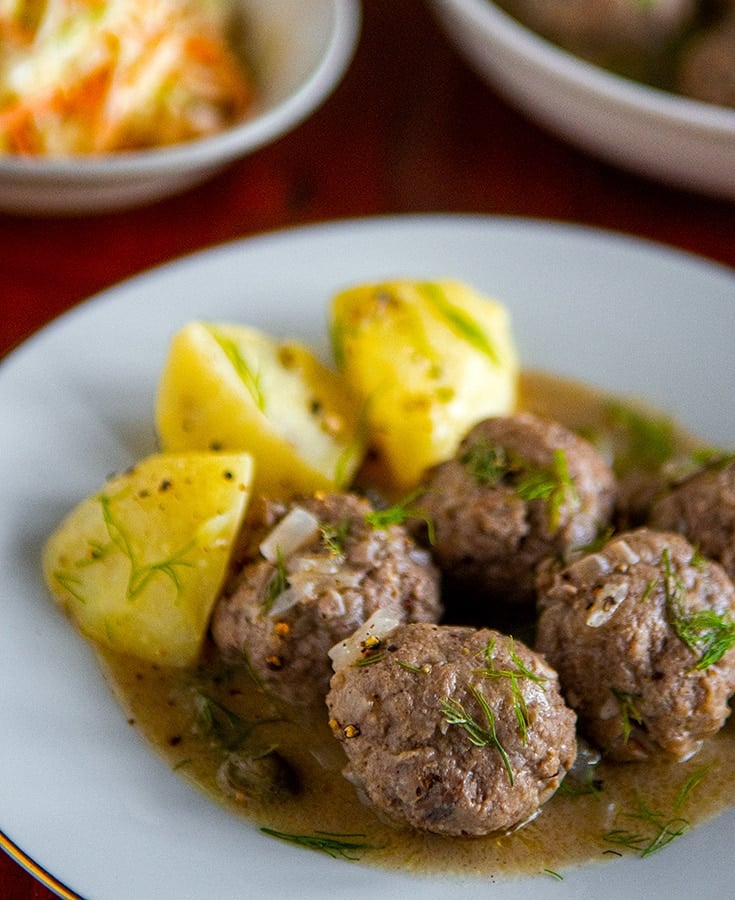 Anchovies, capers and lemon zest are all a must. They’re the ingredients that distinguish this classic German meatballs recipe for Königsberger klopse from other European meatball recipes. They also happen to be some of my favourite ingredients, so they’re not going anywhere. I mention them together for a reason.

One thing I found strange when stumbling across German meatball recipes during my research was how many times people commented on how unusual it was to see ‘Mediterranean ingredients’ such as anchovies, capers and lemon in a German meatballs recipe.

It’s true that we often associate capers, anchovies and lemons with the Mediterranean – in fact, Spain, Italy and France are where most European lemons are grown – but that doesn’t mean they aren’t found elsewhere and don’t feature in other European cuisines. Ingredients from opposite sides of the world have been traded for thousands of years because people in faraway places enjoy cooking and eating them.

Lemons are much-loved in Russia, where they’re sliced and dropped into black tea, and used to make all manner of cakes. Capers, native to the Mediterranean, are grown everywhere from the Canary Islands to the Black Sea and Crimea to Armenia, the Caspian Sea and Iran. As for anchovies, they’ve have long been fished in the Black Sea as well as the Caspian Sea, from where Russians transported them for processing and export to… Kaliningrad.

While traditionally served with parsley buttered boiled potatoes, I love these German meatballs with creamy mashed potatoes and coleslaw or a crisp garden salad, with dishes of dill pickles and sour cream.

Please do let us know in the comments below if you make this German meatballs recipe for Königsberger klopse as we’d love to know how it turns out for you.