My French onion soup recipe will make you a fragrant and deeply flavoured French onion soup that has a hint of Southeast Asian spice and umami, thanks to star anise and a fine quality fish sauce. Oui. Je suis désolé. I’m sorry, I can’t help myself.

Firstly, I’m Australian, which means that I’m born with a natural tendency to reach for anything in the pantry to adjust a recipe or dish to my taste. It’s in my genes. The Australian taste knows no bounds. If you’re Australian or you’ve eaten in Australia, you’ll understand.

Secondly, I’m an Australian based in Southeast Asia for almost a dozen years, which means that almost everything I cook is imbued with Southeast Asian spices, herbs and ingredients. I even add a little fish sauce to my traditional Russian family recipes.

Lastly, we live in Cambodia, which was a French protectorate for around a century, and while the French culinary influence on Cambodian cuisine is often noted, if you’ve eaten your way through Paris you’ll also know there are countless French chefs influenced by former Indochine, so why not? Pourquoi pas?

Before I tell you all about this French onion soup recipe, I have a favour to ask. Grantourismo is reader-funded. If you’ve cooked our recipes and enjoyed them, please consider supporting Grantourismo by using our links to buy travel insurance, rent a car or campervan or motorhome, book accommodation, or book a tour on Klook or Get Your Guide. You could also browse our Grantourismo store for gifts for food lovers, including fun reusable cloth face masks designed with Terence’s images.

Another option is to support our epic Cambodian cuisine history and cookbook on Patreon; or buy us a coffee, although we’ll probably use our coffee money to buy cooking ingredients for recipe testing; or buy something on Amazon, such as these cookbooks for culinary travellers, James Beard award-winning cookbooks, cookbooks by Australian chefs, classic cookbooks for serious cooks, travel books to inspire wanderlust, and gifts for Asian food lovers and picnic lovers.

Now let me tell you all about my French onion soup recipe. 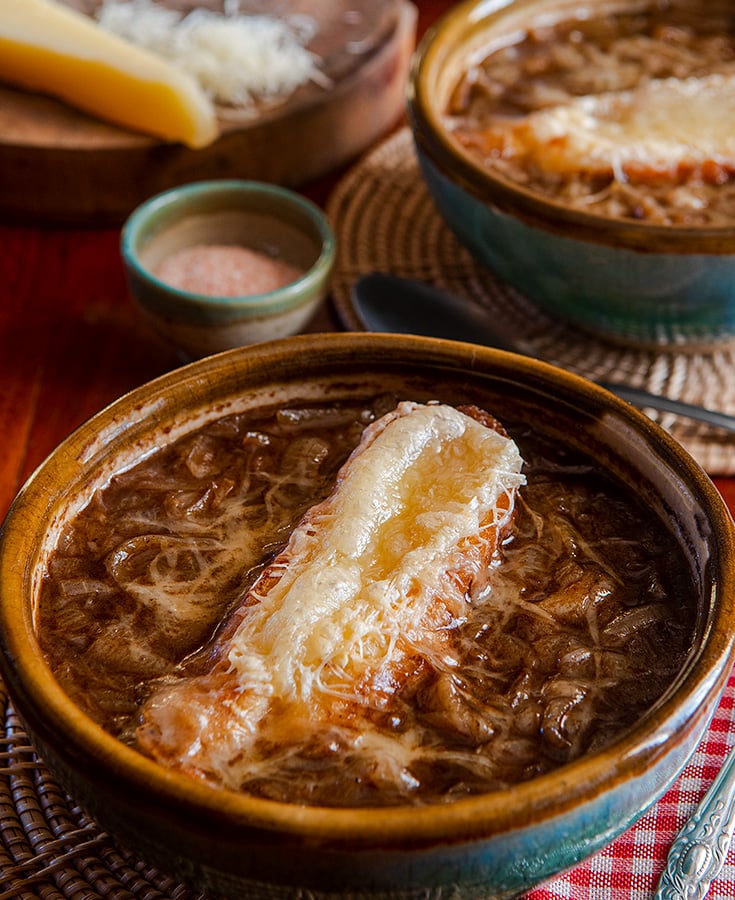 While the French onion soup of my childhood, which was very similar, was made by my mother and was probably based on the French onion soup recipe in Larousse Gastronomique. I’m making this assumption, as dad and I bought her the book for her birthday and Mother’s Day in the mid-1970s – along with the Joy of Cooking.

Though Mum may have had an earlier edition of Larousse, as my parents owned a French restaurant on the beach on the Central Coast of New South Wales, a short drive north of Sydney. It was called La Mer d’Or, the Golden Sea.

I don’t know why, as the sea was cobalt coloured, but I do remember the colourful matchboxes and I know that there was a French onion soup was on the menu.

This is all to say that while I have been slurping French onion soup my whole life, it was only recently that I took it upon myself to make a French onion soup, and naturally, I messed with it. As I said, je suis désolé. I’m sorry, I blame my upbringing. 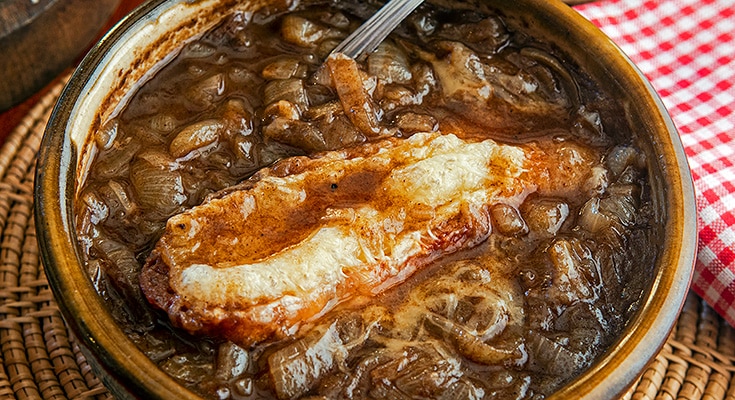 Just a few tips to making this French onion soup imbued with Southeast Asian flavours. Raymond Blanc’s recipe calls for the flour to be toasted for 30 minutes in the oven at 170°C, however, my flour was nice and brown and toasty after 3 minutes so that could have been a typo.

We cook everything in a wok, so we use a wok for this French onion soup recipe as well. While this remains a slow-cooked soup, it’s a little faster. When we first followed the chef’s recipe it took a couple of hours to make the soup. The wok reduces the time significantly.

If you don’t use Asian spices or fish sauce, perhaps start with half my suggested amounts, taste, and then add the rest if you like. I actually add twice as much as I’ve recommend in this recipe, however, I use this stuff every day.

I’ve stuck with the chef’s choice of Comté cheese as I adore cheese but I don’t like those French soups that are completely covered in a thick layer of gooey cheese. That’s my preference but you do as you like. Bon appétit!

Please do let us know if you make this French onion soup recipe with a Southeast Asian twist as we’d love to know how it turns out for you.