Birdwatching in Costa Rica is a must-do experience, even if you’re not a twitcher or birder. There’s such an abundance of beautiful birds and with good guides they’re not hard to see. And that’s how we found ourselves on a birdwatching adventure in search of the Scarlet Macaws.

Birdwatching in Costa Rica – In Search of the Scarlet Macaws

Roger, our guide for our birdwatching in Costa Rica experience, is at the wheel of the vehicle.

“These settlements were built by the United Fruit Company in 1940,” he tells us, pointing out some rather quaint old housing along the way. “They were built for people hired to work the banana plantations, and, when they weren’t successful, cocao, then recently, palm plantations to produce palm oil.” Oh. 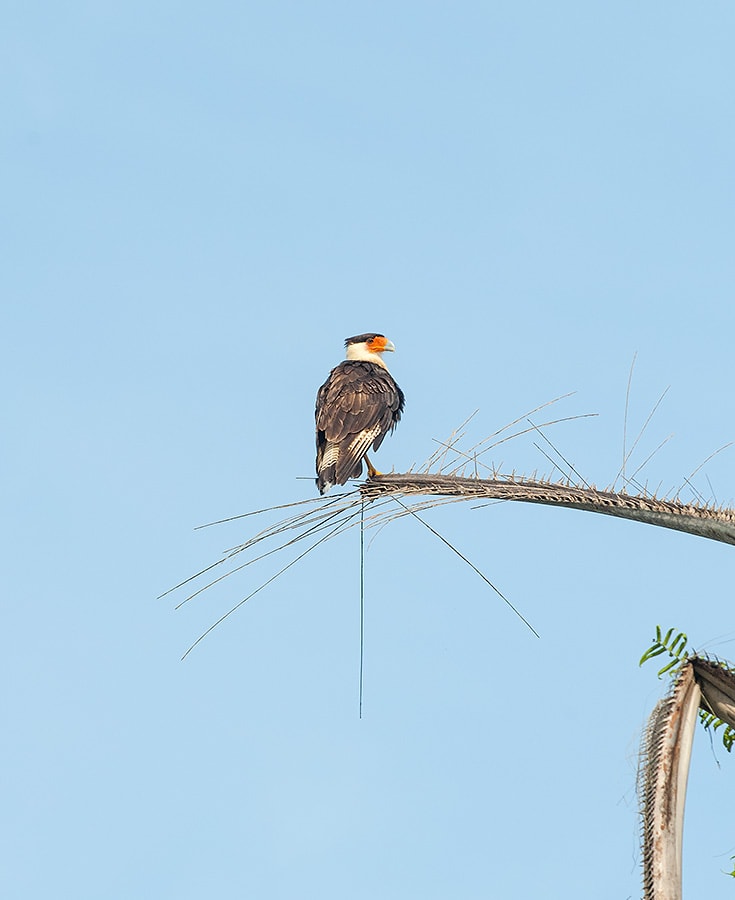 “I love this road,” Roger says, “Every town along here has a history.”

Roger tells us that he started his tour company ten years ago, on the advice of his professors, after completing a degree in business. While a birdwatching company might not seem the logical outcome of a business degree, Roger loves it. Based in Quepos, his company offers everything from mangrove cruises to canopy tours, and today he is taking us out for a spot of birding.

We cross the bridge over the wide, muddy Savegre River (it’s the colour of chocolate milk) and turn onto a gravel, dirt road. We’re headed for El Silencio, a nature reserve 28 kilometres from Quepos, created by a farming cooperative on land that once belonged to the United Fruit Company 27 years ago.

We’ve barely left the highway when Roger points out a Crested Caracara on top of a tree (and imitates their call that sounds similar to their name), a splendid Great Kiskadee with a bright yellow chest perched on a bald palm tree, a Grey-necked Wood-rail, and a Green Heron, which he says is from the Caribbean. 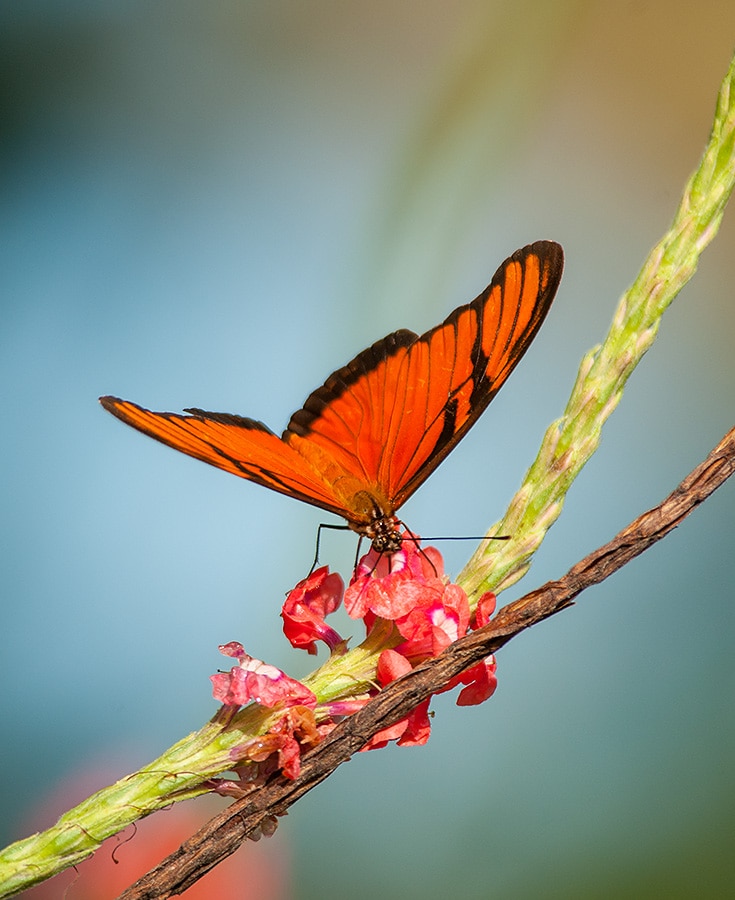 “Jurassic Park was filmed here,” Roger tells us proudly. But we’re much more interested in the small present day beauties we’re already seeing before our eyes than those prehistoric beasts from the big screen.

As we drive through the plantation we see groups of workers in dirty denim jeans, rubber boots and wide-brimmed hats, enjoying their breakfast beneath the shady palm trees. It’s just 7am yet they look like they’ve already worked a few hours.

After the United Fruit Company shut down its operations, 42 families and squatters established Co-op El Silencio. Now, in addition to their palm plantations, they farm papayas, plantains and corn, keep chickens to sell their eggs, and own the community store on the main street.

Up at Albergue El Silencio, there is a simple, open, thatched-roofed restaurant serving home-cooked food and 10 rustic wooden cabins built to house volunteers and hikers.

Volunteers come for a structured program of work ranging from clearing and toiling the land to working at the wildlife refuge established to rehabilitate wild animals that had been kept as pets and then return them to their natural habitat.

The Co-op also offers its land up for eco-friendly nature-based activities, such as birdwatching.

After a coffee at the restaurant overlooking a verdant valley of palms, Roger asks the manager what birds he’s seen this morning. It turns out he spotted some Scarlet Macaws and Toucans, perhaps two of Central America’s most exotic and quintessential birds, and the ones that many travel to Costa Rica to see. We saw Toucans at Manuel Antonio National Park when we first arrived, so we’re keen to see some Scarlet Macaws in the wild. 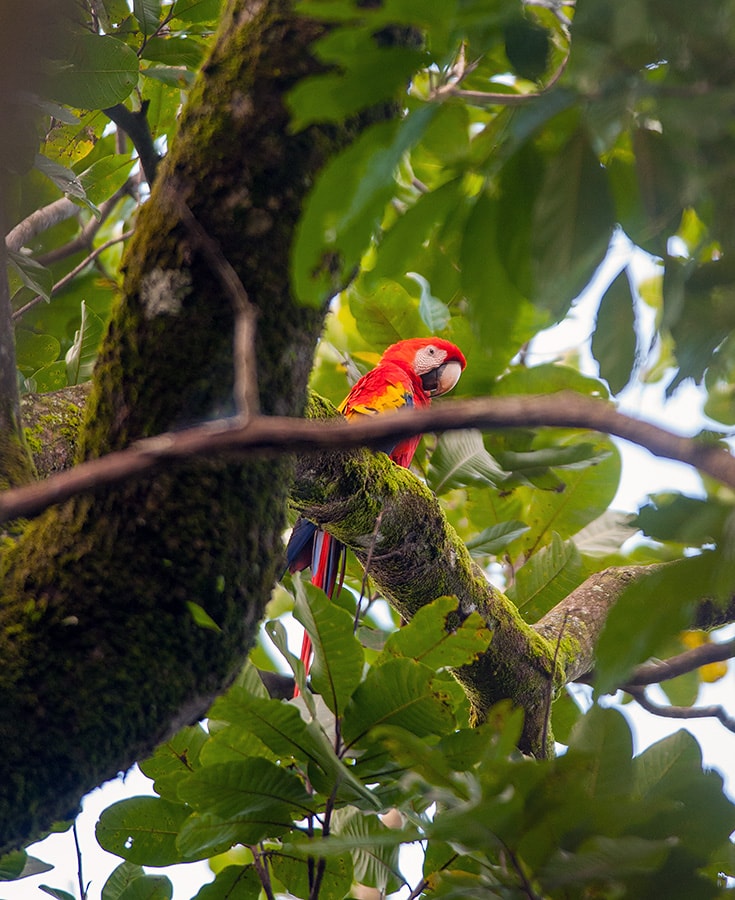 We leave the car at the restaurant and walk back along the narrow road that runs through the heart of the village with its squat gelato-coloured houses, scrawny chickens and roosters, and myriad dogs, to a massive clump of trees on the outskirts of town.

A young girl in a school uniform hikes up the hill towards us. Roger asks if she’s seen any Scarlet Macaws today. She points up to the trees on the hill above us. There’s no sign of them now so we make our way down the hill. A mother and daughter approach us and Roger asks them the same question.

“They’re normally in these trees,” they respond, pointing to the trees above us.

They’re not, so we head down the hill and along a muddy path that disappears beneath a clump of trees. A trickle of water has turned into a small torrent, but as Roger considers what we should do, he hears loud screeching bird sounds.

“Toucans!” he reveals with a grin, and moments later we’re removing our shoes, rolling our trousers up, and wading across the creek in search of Toucans.

We trudge along a muddy track, stopping every now and again when we hear a bird sound so Roger can identify it and decide whether it’s worth pursuing. 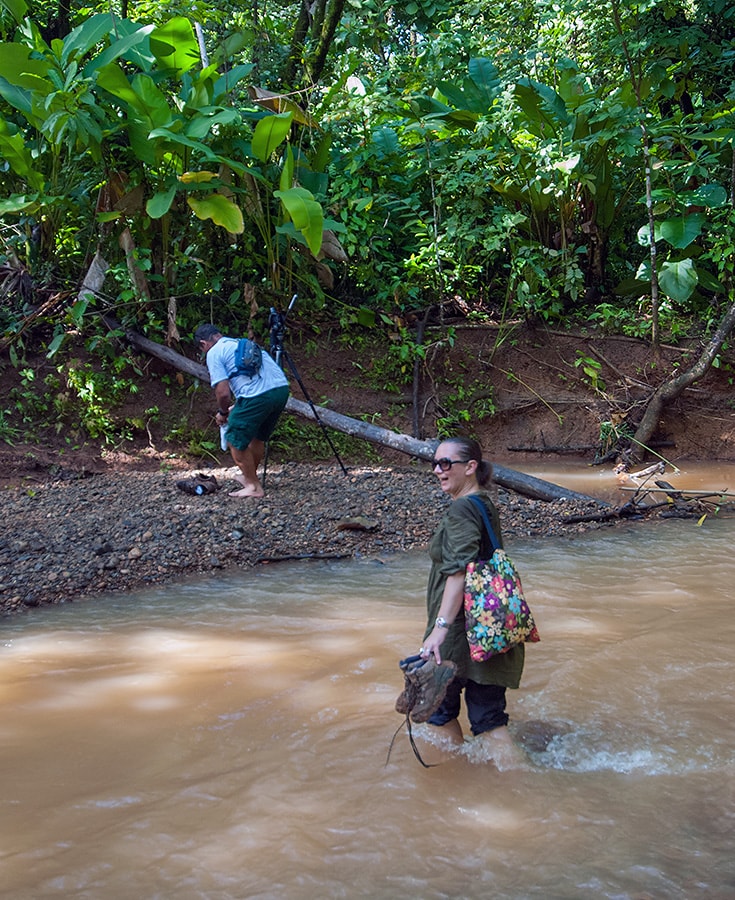 The irony of El Silencio is that it’s not. While the fresh country area is restorative and the atmosphere is tranquil, it’s a noisy neck of the woods. We hear dog’s barking, a rooster crowing, 1950s American rock’n’roll blaring from the village, and a string trimmer.

Roger takes us to visit the Wildlife Refuge, hidden beneath a large shady clump of trees. There we discover a Spider Monkey hanging upside down from a tree holding three bananas, one of which he’s eating.

“The Costa Ricans used to love to eat them”, Roger tells us – and he’s means the spider monkeys, not the bananas – “Which is why they’re rescuing them, rehabilitating them and releasing them into the wild,” he says.

We approach the man with the string trimmer, trimming back tall grass. Roger asks if he’s seen the Scarlet Macaws today. He hasn’t, but he points us in the direction we’re heading where he says he saw some Toucans a short time ago.

Just as we make a move, Roger hears the sound of the Scarlet Macaws coming from the direction we just came. We’re off!

We charge beneath the trees and beyond the Wildlife Refuge into the thick vegetation. We see faint flashes of red high above us, but just as we walk deeper into the growth, the dazzling red birds fly off again into the opposite direction.

Our guide charges through the tall grass, beckoning us to quickly follow. Our feet sink deeply into the slushy mud, but we’re lucky that’s the most of our problems. Because as Roger strides through the thick, high, grass he suddenly curses, causing me to stop dead in my tracks.

He’s been stung by something – a centipede, he thinks. Whatever it is, I don’t want any part of it. I’ve recently been stung by bees twice, and I’m allergic. I’m reluctant to move forward. As he winces, Roger guides Terence and I through a safer route.

Back on the muddy path, we trudge through the boggy ground to the creek. Shoes and socks off again, trouser legs rolled up, and once again we’re wading knee-deep in water to the other side. Socks on, shoes on, laces tied, and we’re back onto the road from whence we first came.

Roger hears some birds, points in the direction of the sound, and at last we see them clearly! Six, maybe eight of the vivid scarlet birds!

We hurry up the hill, set up the scope and fix our lenses for some shots. But once again they fly even higher. We turn the hill and take some moss-covered stairs up behind an abandoned, tumbledown brick building.

There they are! And there we stay for a while, watching these spectacular birds chat, clean, feed, and even kiss and canoodle. They are dazzling.

Satisfied that we have at last discovered the birds we didn’t even realise we were going to be setting out to look for when we started our day, we head back through town and up the hill to the restaurant for a tasty local breakfast of gallo pinto, scrambled eggs, and fresh tamarind juice.

It was a strangely satisfying morning. The thing about birdwatching in Costa Rica, and anywhere for that matter, is that you can never predict how the birding experience will turn out. But in Costa Rica there is so much birdlife that with a good guide you’re in for something more than a long walk and strained neck!