I love how Cambodians shorten names – which is something we Australians have a tendency to do – as it makes my life so much easier when it comes to naming dishes for the Cambodian cookbook and culinary history we’re (still) working on (damn you, pandemic). But, of course, chek ktis is so much more than banana in coconut milk. For me, it’s Cambodia in a bowl and it’s so good.

But before I tell you all about this Cambodian banana coconut tapioca pudding recipe, I have a favour to ask. Grantourismo is reader-funded. If you’ve used and enjoyed our Cambodian recipes, or any of our recipes, please consider supporting Grantourismo.

You could support the site by supporting our original, epic, first-of-its-kind Cambodian culinary history and cookbook on Patreon for as little as US$5 a month. Or, you could buy us a coffee. Although know that we’ll use our coffee money to buy cooking ingredients for recipe testing.

You can also support our work by using links on the site to book accommodation, rent a car or hire a motorhome or campervan, purchase travel insurance, or book a tour on Klook or Get Your Guide; shopping our Grantourismo online store (we have fun gifts for foodies designed with Terence’s images); or buying something on Amazon, such as these award-winning cookbooks, cookbooks by Australian chefs, classic cookbooks for serious cooks, cookbooks for culinary travellers, travel books to inspire wanderlust, and gifts for Asian food lovers. Now let me tell you all about this Cambodian banana coconut tapioca pudding recipe.

If you travelled to Siem Reap prior to the pandemic and dined at one of its many outstanding Cambodian restaurants, chance are high that if you saved room for dessert, you might have tried a variation of this banana in coconut milk with tapioca or sago.

If you did a Cambodian cooking class in Siem Reap, then there’s an even greater chance that this was the Cambodian dessert you made and you probably have this banana coconut tapioca pudding recipe in the little cookbook you were given at the end of the class.

This dessert is so Cambodian that I probably should have called it a Khmer banana coconut tapioca pudding recipe rather than Cambodian, but I wanted you to find it easily when you’re searching for Southeast Asian dessert recipes or even Cambodian dessert recipes and I appreciate there’s a lot of confusion out there as to the meaning of ‘Khmer’.

While many people associate ‘Khmer’ with the brutal ‘Khmer Rouge’ or ‘Red Khmer’ regime that was responsible for the Cambodian genocide of the latter half of the 1970s, ‘Khmer’ simply refers to the largest ethnic group of Cambodia, which comprises most of the population, and the language they speak, which is Khmer. 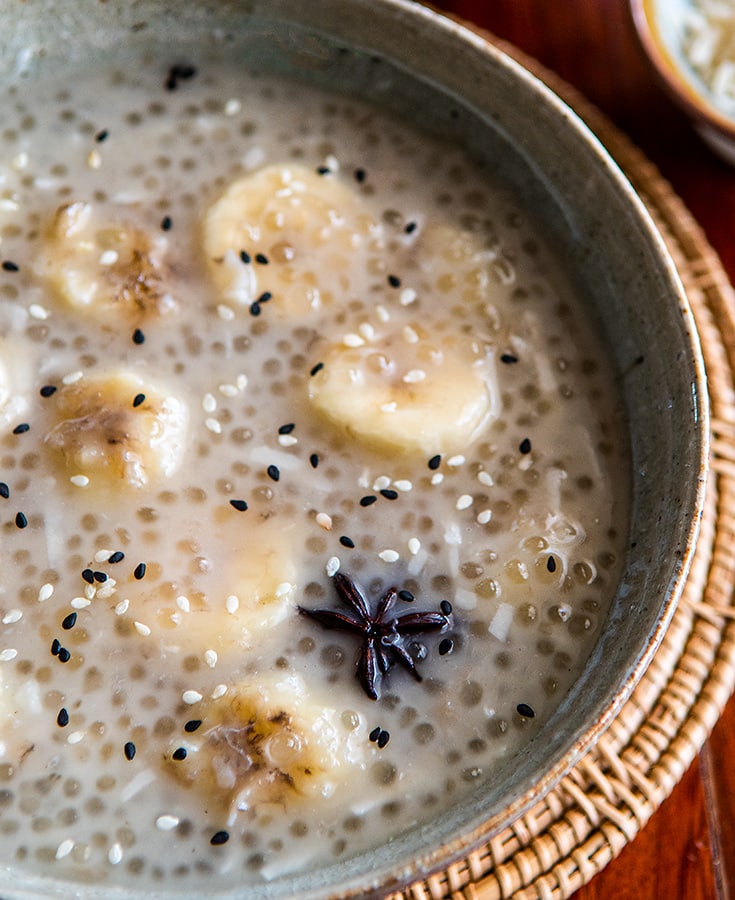 If I was to call this a Khmer dessert, it’s to suggest that this is a dessert of the indigenous Khmer people, whereas if I called it Cambodian, it would be a dessert cooked and eaten by all Cambodians, not only Khmer, so Chams, Chinese-Cambodians, French-Cambodians, or ethnic minority groups native to provinces such as Ratanakiri and Mondulkiri, and so on.

Based on my research, I believe this is a very old Khmer dessert, but that depends on whether it’s made with sago or tapioca, because the former has been used in Southeast Asia for longer than the latter, and while sago and tapioca are often used interchangeably in recipes in Southeast Asia, this dish has more often than not made with tapioca in recent decades.

You can read more about all that when our Cambodian cookbook and culinary history are eventually published. For now, let me just share a few tips to making this banana coconut tapioca pudding recipe.

Just a few quick tips to making this banana coconut tapioca pudding recipe. While this recipe calls for tapioca pearls, you could use sago pearls if they’re easier to find, as they are here in Cambodia. While sago and tapioca come from different sources, most people can’t tell them apart and they’re used interchangeably by many cooks.

In one recipe I have in a little Cambodian cooking class ‘cookbook’ (more like a pamphlet), sago appears in the title of the dessert, yet tapioca is listed in the ingredients. Whatever you use, tapioca or sago, they’ll both work perfectly fine.

Just make sure to stir continuously so the pearls don’t stick to the bottom of the pot and don’t take them off the heat until all the tiny white dots have disappeared from the centre of the pearls. 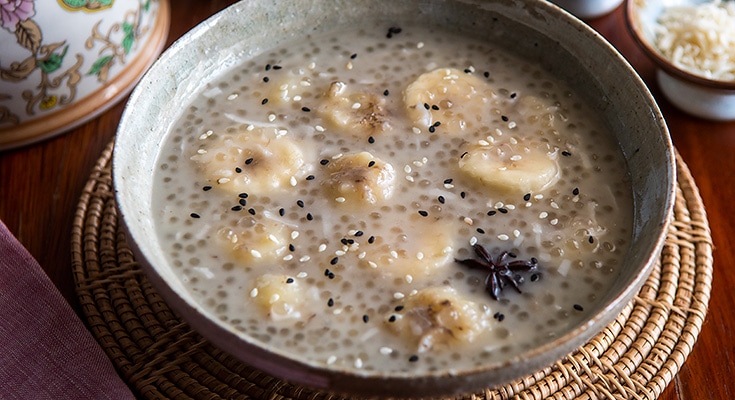 Traditionally, palm sugar was used in this dessert, and I much prefer the caramel-like taste, however, these days Cambodian cooks often use white sugar and I know palm sugar can be hard to come by outside Southeast Asia, although I did spot some palm sugar from Thailand on Amazon.

Cambodian cooks typically sprinkle on white sesame seeds only, but I love the extra crunch of black sesame seeds and also the look of the black seeds, with the pretty star anise. Now if you did make this in a Cambodian cooking class you are probably wondering what the star anise is doing in this dish.

The star anise is my addition to this classic banana coconut tapioca pudding recipe. Star anise is a very old Cambodian ingredient and it adds so much aroma and imbues this tapioca porridge with so much wonderful subtle flavour, it’s an essential ingredient for me. Try it and let us know what you think.

Please do let us know if you make this banana coconut tapioca pudding recipe for Cambodia’s chek ktis as we’d love to hear how it turns out for you.