This authentic Khmer prahok ktis recipe makes the deliciously rich Cambodian dip made from fermented fish, minced pork and coconut milk that is served with fresh crispy vegetables. It also makes a great introduction to the use of Cambodia’s beloved prahok and the herb and spice paste called kroeung in authentic Khmer cuisine.

Made with prahok, yellow kroeung herb and spice paste, minced pork, pea eggplants, some chillies and coconut milk, this prahok ktis recipe – or more accurately, prahok k’tis – is as authentic as they come. But it is also a recipe where you can tone down the amount of prahok as a mild concession to Western palates.

One of the things that restaurants owners in Siem Reap have told us is that when tourists to Cambodia first try prahok ktis, if it’s too ‘fishy’ smelling or it tastes a little like an old French cheese, they automatically think there is something wrong with it, usually because you don’t normally associate pork mince with a fermented aroma.

Once they are assured that it’s fine, many go on to fall in love with the Cambodian dip, despite the fact that their ‘Western’-trained noses tell them the pork dip is ‘off’.

It’s one of the battles that the good Cambodian restaurants face here and it’s often the fault of the polite well-meaning staff who don’t go far enough to explain that it’s actually meant to taste like this. When we dine with visitors keenly interested in learning about Khmer food, we always order it as a great introduction to the key ingredients in this much misunderstood cuisine.

There is a lot to be gleaned from deconstructing this dish and its combination of ingredients. An immediate reference point for me is the class of Thai relishes known as nam prik. The pungent, fishy, strong flavours of these dips served with either vegetables (raw, cooked or pickled) or rice is one very familiar to Khmer cooks, who have been doing it for many centuries – well before the Thais were.

Pla raa, the Thai’s version of fermented fish that’s similar to prahok, is said to have been introduced to the Thai by the Laotian people, which could be correct, but we have an inkling that the Khmer people made it first, given the historical timeline. The Thais carted much of the Angkor population, including the cooks, off to Thailand at the end of the glory days of the Khmer Empire.

However, it does make sense that the same practice of fermenting fish would have occurred centuries before in both Laos and the Isaan region of north eastern Thailand (which was for some time part of the Khmer Empire), where freshwater fish is seasonally abundant in the Mekong and many other rivers.

Most certainly there was an exchange of culinary ideas between the Laotians and the Thais, and if you’ve ever tasted the wonderful khao soi from Laos and nam prik ong (a dip with tomatoes and pork), you will taste the connection. Indeed, it is nam prik ong that represents the most obvious link between the Thai nam prik and the prahok based dips of Cambodia.

While nam prik ong uses fermented soy beans and fish paste, prahok ktis uses prahok to give the dish the pungency that Cambodians love so much. But it’s quite conceivable – considering the liberal use of pla raa throughout the nam prik repertoire – that fermented fish was once used to help create this flavour profile.

Take the pea eggplants out of the prahok k’tis and throw in some of those slightly sour tomatoes, and there is a case to be made that the two dips have the same parents. But there is one caveat: coconut milk.

Nam prik recipes do not include coconut milk as an ingredient. More research revealed that another Thai relish that also appears in Khmer cuisine, was closer to the mark: lon. Lon is a kinder, gentler dip than nam prik. ‘Lon’ or ‘lohn’ actually means ‘to simmer’ and that’s how these dips are made.

The creaminess of the coconut cream or milk in lon takes the edge off the harsher ingredients and certainly mellows out the pungency of the fermented fish. Chef David Thompson notes in his enormous tome to Thai cuisine, Thai Food, that tamarind water and palm sugar are often added to a lon, and that raw vegetables are the perfect accompaniment. Sound familiar?

Thais often call lon an ‘ancient’ dip from the central plains. Obviously, it’s not ‘ancient’ in the true sense of the word, however, if we assume they mean the Middle Ages, they would be referring to the very first Thai capital, Sukhothai, in the northern central plains.

Sukhothai was a Khmer capital when the chiefs of the Tai tribes, which had gradually been migrating south from southern China, ousted the Khmer commander in 1238. Prior to this the many settlements of mostly Mon-Khmer tribes were part of the Khmer Empire and their administrative centre was Angkor. If the dip existed in the 13th century then it most probably came from the Khmers*. (*Update: lons are far older and are Khmer. You’ll have to wait for my Cambodia culinary history to learn just how old.) 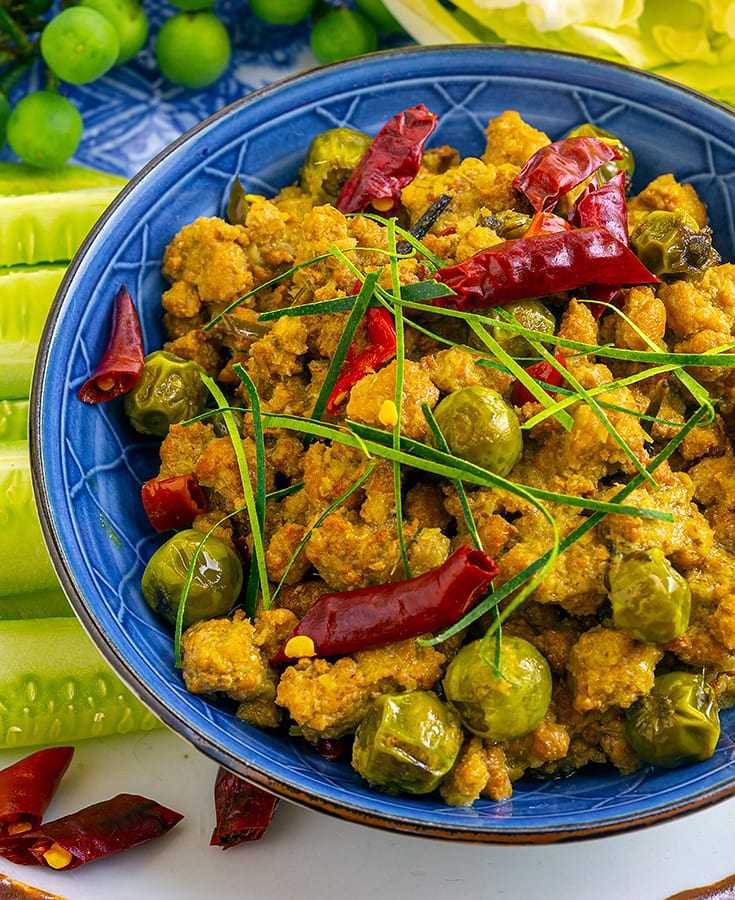 Before we get to the prahok ktis recipe proper, a few words on pea eggplants. I’ve now spent 30 years tirelessly removing tough, bitter pea eggplants from Thai curries, always deliberating why they were in there in the first place. When I arrived in Cambodia and saw pea eggplants in this dish, I thought I’d be doing the same. Not a chance.

Prepared correctly, the pea eggplants are delicious in this dip. The secret is – according to some lovely old ladies we have been learning the secrets to Cambodian cooking from – to really cook the eggplants out, either over a charcoal grill or in a pan, with some oil and chillies. Then, after they’ve softened, cook them further in coconut milk or cream to to reduce the bitterness. The pea eggplants add a little smoky bite of texture to the dip.

Also of note in this dish is that it uses prahok sach, made from larger fish, but you could use prahok ch’oeung – not chopped, but soaked in hot water to make a ‘stock’. You could quite easily use Thai pla raa if you’re not in Cambodia and that’s easier to find than prahok. Try just one tablespoon of prahok or pla raa the first time you make it if you’re worried about it being too ‘fishy’ tasting.

One last note: some wonderful, very old versions of this dish use wood apple – it’s a hard-shelled fruit we have here in Cambodia that’s also found in Sri Lanka, Pakistan and India, where it probably migrated from to find its way into Khmer cooking. Its sour notes can be replicated by using tamarind water, included in this recipe.

Do let us know if you make our authentic Khmer prahok ktis recipe as we’d love to know how it turns out for you.