Prahok is the most distinctive ingredient in Khmer cooking alongside the Cambodian curry paste called kroeung. This chunky, grey, visually unappealing, fermented fish paste is used by every Khmer cook to add depth of flavour to just about every dish in their Cambodian cuisine repertoire.

Most visitors to Cambodia don’t have to fear this pungent fermented fish paste called prahok as it’s either used very sparingly or not at all in Cambodian dishes that they’ll be served in most tourist restaurants in Siem Reap.

While this might appear to be a contradiction of the statement I made in the opening, Cambodian restaurateurs have long known that local levels of prahok served in any Cambodian dish placed in front of a foreigner is not going to elicit a positive response.

In fact, when interviewing Cambodian chefs at a well-known Siem Reap restaurant, I asked them what they thought would happen if they cooked their restaurant dishes just like they would at home and the answer was startlingly clear. “We’d go broke,” they said, as their use of the fermented fish paste in their domestic cooking is liberal to say the least.

So why is this olfactory-offending fish condiment so important to the Khmer cuisine of Cambodia?

Historically, for the poor rural people in Cambodia, prahok would at times be the only source of protein in a meal, eaten mixed in through a bowl of rice.

During the wet season and for a couple of months afterwards when fish are in abundance, locals begin preserving fish. The fish is salted (as it is in the top image above), dried, smoked, and fermented to make prahok.

This way they can use the preserved fish in its many forms throughout the dry season, when water levels are at their lowest and they might not have another form of protein.

As a result of this, the fermented fish paste has found its place in most Khmer dishes as the main source of protein, as well as serving as a powerful flavour enhancer. In one of the key dishes of the Khmer culinary repertoire, the classic soup, samlar kâko or samlor kako, it can act as both, if there is no fresh fish available to add to the soup, with the usual seasonal vegetables and fruit.

There are two basic types of prahok, prahok ch’oeung and prahok sach. The former is made with small fish called ‘riel’ (as in the Cambodian currency), the latter with larger fish that have been filleted.

To make the fermented fish paste, the fish is filleted, salted and placed into baskets, where the runoff liquid collected can be used to make teuk trey (fish sauce). Although using the fish to primarily make fish sauce rather than just as a welcome byproduct is a different process.

After drying and salting again, the fish are left to ferment in large earthenware jars (or these days, plastic jars), and at prahok markets in even larger concrete vats, for anything from several months to two years.

The resulting aromas will take your breath away if you visit a commercial prahok making village. To be fair, at one prahok market in Battambang, we were put off more by the very ‘rustic’ food hygiene practices as much as the stench on our first visit.

Many local cooks we have spoken to during our research for the Cambodian cookbook we are working on say they prefer to make their own fermented fish paste for this very reason. I’m pretty sure the young lady in the image below was half-serious when pulling this face while dishing up a bag for a customer. 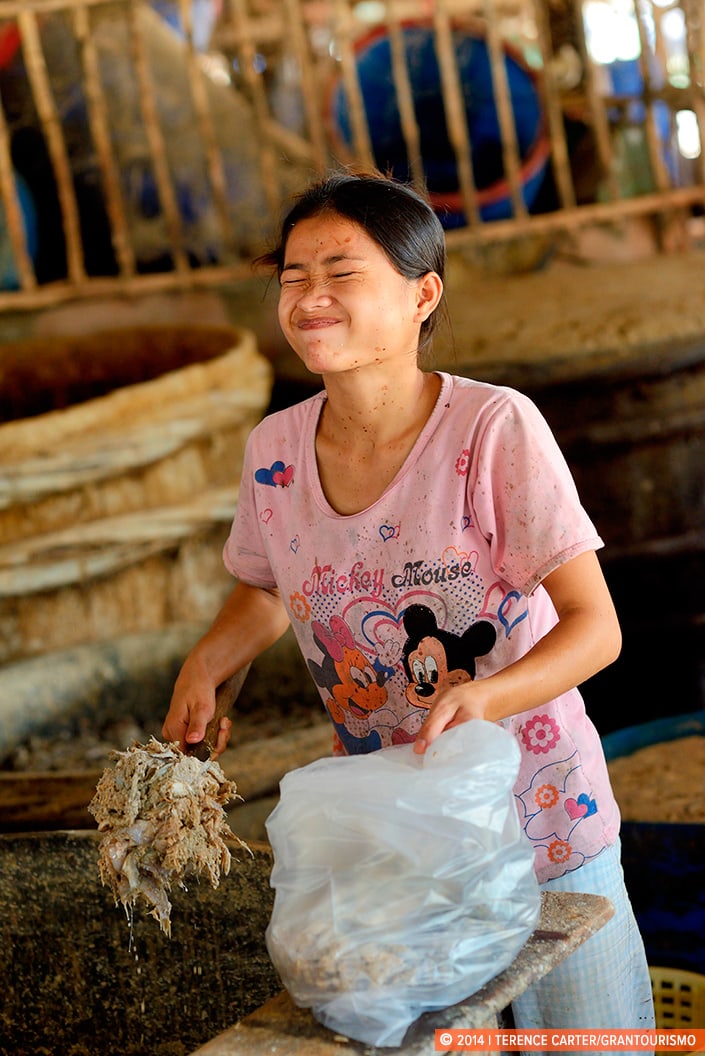 The prahok ch’oeung is generally used by adding boiling water to a little of the fermented fish paste and just using the resulting ‘prahok water’, one of the reasons being the small bones in the fish. With the prahok sach, it’s often chopped finely and put into the dish or used as part of a dip that’s eaten with fresh vegetables.

In the next article, I’ll be posting a recipe for prahok ktis (more correctly: prahok k’tis), a dish where the fermented fish paste really shines — in a good way. It’s also an opportunity to discuss its relationship with the Thai fermented fish, pla raa.

About the Author: Terence Carter