It’s impossible not to notice Rio’s favelas or shanty towns. You’ll see them tumbling down Rio’s hillsides from your plane, sprawling beside the expressway on the drive in from the airport, peeking between the elegant high-rises of Copacabana, and encroaching into the charming old neighbourhood of Santa Teresa.

Perhaps surprisingly, in a city famous for its football, samba and seaside, a tour to the favelas is actually one of the most popular things to do in Rio. There are a handful of operators offering guided visits, but we decided to try Favela Tours, ran by Marcelo Armstrong, the pioneer of tours to the morros (hills) in Rio.

We’re going to visit two very different favelas: a small community called Vila Canoas, which has a population of around 3000 people, and Rocinha, the largest favela in Latin America with anywhere between 300,000 to 1 million residents depending on what you believe. Both are located in one of Rio’s wealthiest neighborhoods, São Conrado. On our way to Vila Canoas, our guide Louis briefs us on the history of the favela and what we can expect from the tour. 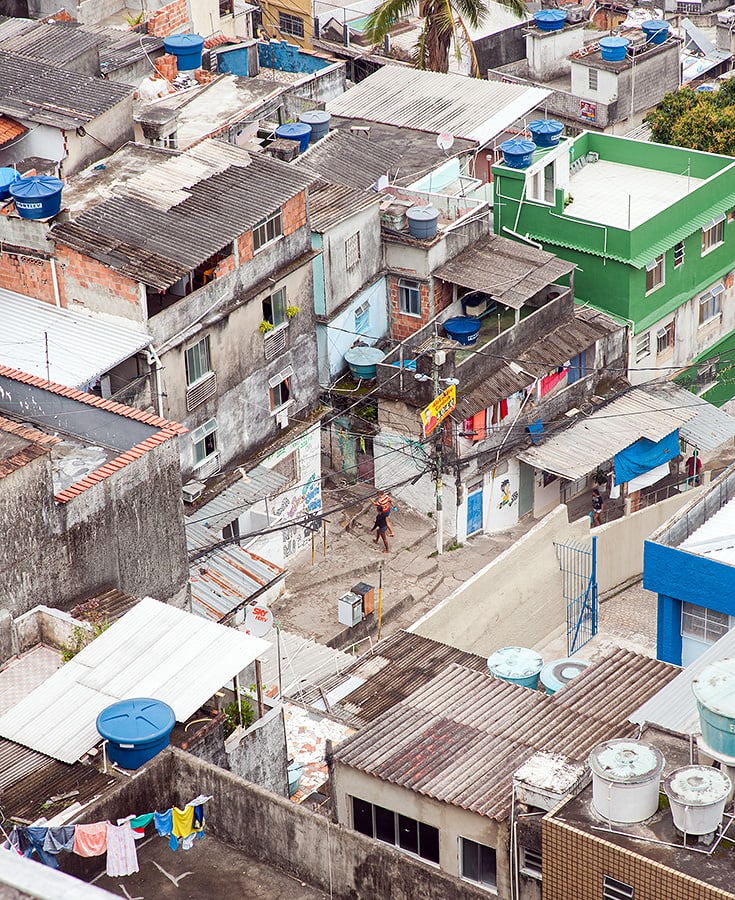 “Favelas began with the abolition of slavery,” Louis tells our group of ten. “We were the last country to abolish slavery in 1888 and the slaves fled to the cities and slept on the pavements. Soon, they made their homes in the hills, and the ‘problem’ of what to do with all these people was swept under the carpet.”

“In Brazil, citizenship requires that everyone have an identification number attached to an address, which enables people to get access to public housing and healthcare, but the 4 million people living in favelas in Rio don’t have numbers so they don’t really have citizenship or access to services,” Louis explains. “But they do have the right to vote and they vote in the same way, following their leaders like tribes, making them one of the biggest political forces in the country.” 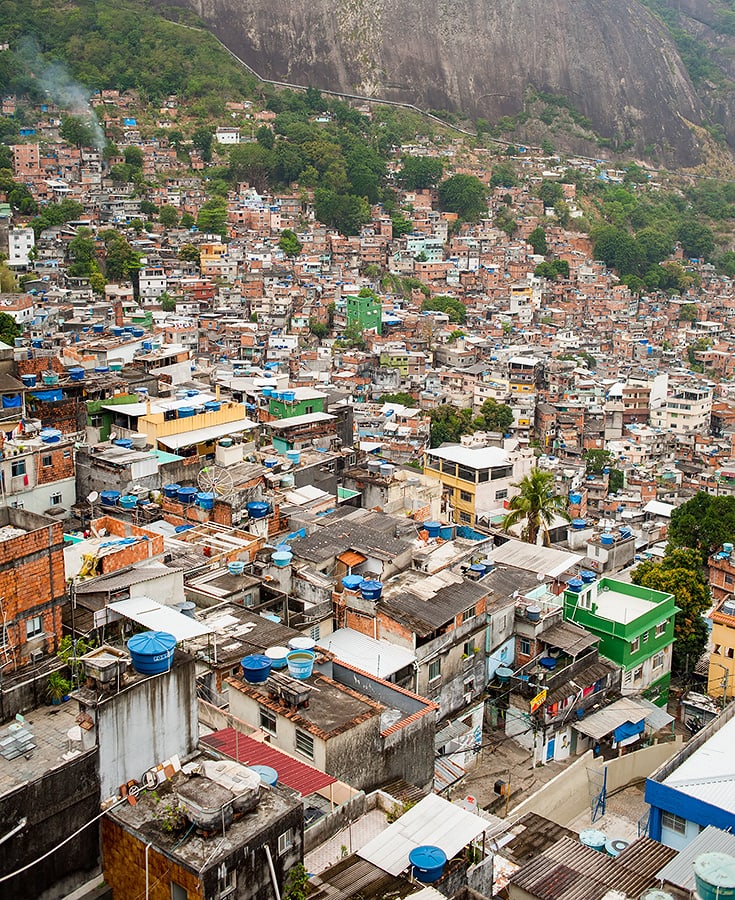 The favela residents live under a completely different moral code, according to Louis. “They have morals and taboos, but there are no other laws or regulations in favelas. Their only symbols of authority are the drug lords who control the favelas, many of whom are seen as Robin Hood-like figures.”

For the most part, Louis explains, police cannot enter the favelas, and here in Vila Canoas, where there are colossal mansions bordering the community, local residents actually chose to remove a police box and live under the protection of the favela leaders as they felt it was safer.

Our first stop at Vila Canoas is a day care and after-school centre for the children of the favela operated by Para Ti, an NGO started by Italian Franco Urani, a former President of Fiat Brazil in the 1970s and his wife Giuliana.

As we walk through the brightly painted building, we see very serious-looking kids concentrating as they work on computers, kids who don’t appear to have a care in the world playing football, and in the classrooms studious children getting help with their homework from tutors, help their uneducated parents or parent – most kids only have a mother, Louis reveals – are unable to provide. The children are also given meals when they’re at Para Ti, and a percentage of our tour fees pays for their lunches. 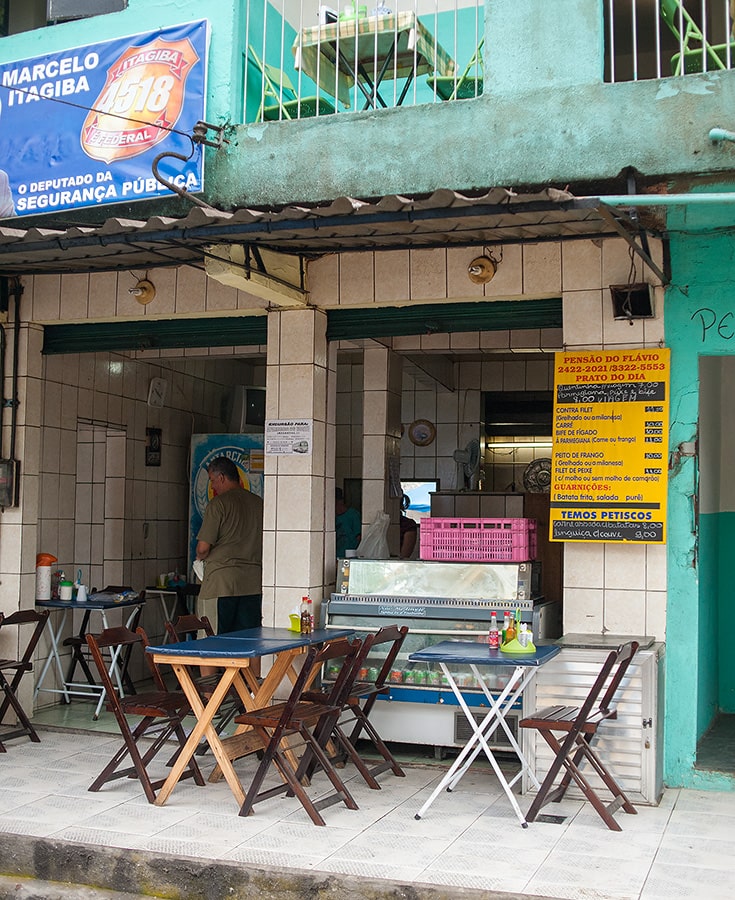 We head up to a covered terrace from where we have a view of the wrought iron rooftops of the ramshackle homes of Vila Canoas, surrounded by thick jungle.

“These people have built these buildings in places that architects would have said was impossible to build upon!” Louis says. “But now architects come to study the favelas, because they have built them in such a way – with their narrow stairways and open houses so that air can circulate – so that they stay cool when the rest of Rio is hot in summer.”

We leave Para Ti and stroll up the road, passing simple eateries and grocery shops, and decend down a skinny set of stairs into the heart of the community. Louis points out the astonishing tangle of electricity cables – even worse than any we’ve seen in the Middle East! He claims that residents using electricity illegally tangled the cables intentionally to make it difficult for electricity workers to know which ones to cut. 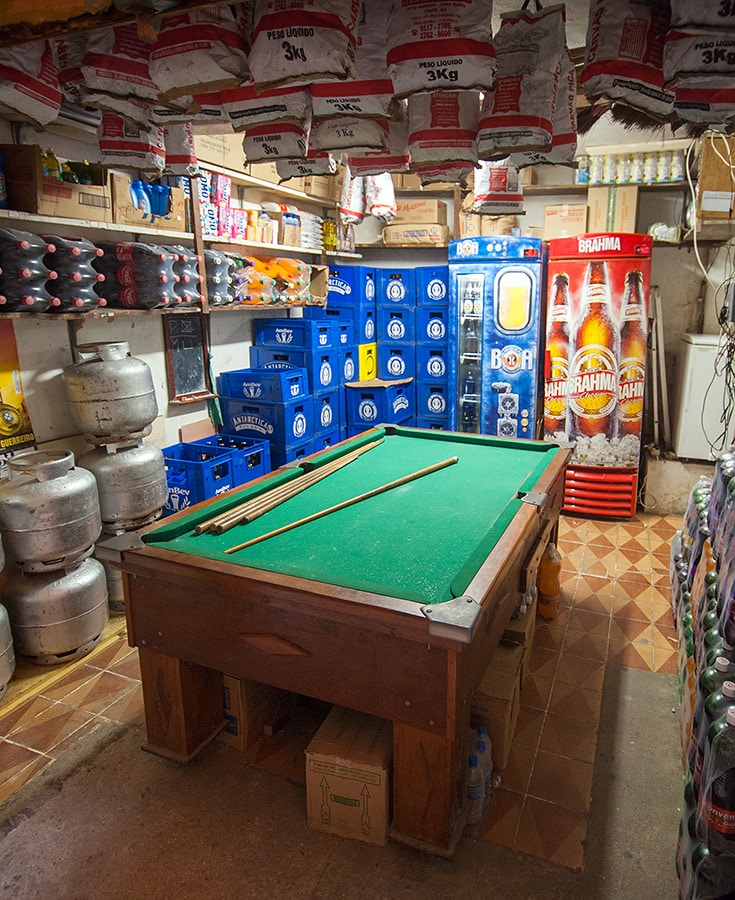 For many years this favela didn’t have electricity, running water, or even street names. Now that it does, they’re all displayed proudly – electricity meter boxes that are often hidden away in Rio are front and centre here, while the street names are painted brightly or prettily decorated with tiles. We pass a tiny hair salon, a small grocery store and café, and a miniscule bar with a pool table. People greet us with a smile for the most part and don’t seem too fussed that we’re intruding into their personal space.

On our way to Rocinha, Louis points out luxury residential buildings lining the seafront that boast 1000sqm apartments sprawled over two to three floors. This is some of Rio’s most expensive real estate according to our guide, but while the front side of the building has spectacular sea vistas, from the back side they look onto the homes of the poorest of Rio’s poor.

As we approach Rocinha, Louis tells us that we won’t be taking a stroll here as it’s much too dangerous, and we can’t even take photos as we drive through the favela in case we capture an image of someone who doesn’t want their photo taken! Louis says he’ll let us know when it’s okay to take pictures and what we can take pictures of (more tangled electricity cables, for instance) but warns us to be careful not to take photos of anyone carrying a gun! 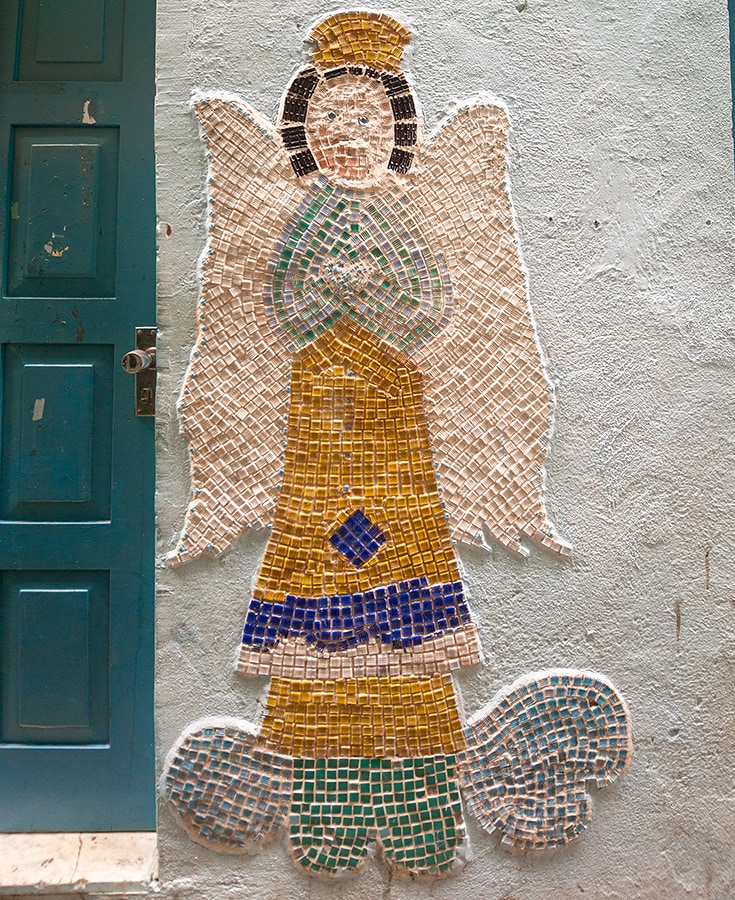 Rocinha, Louis says, has an official population of around 90,000 residents but in reality conservative estimates are that there are about 300,000 people living here, although some claim there could even be up to 1 million. Officially, families have 3-4 kids, but in reality it’s more like 8-9, he says, with siblings having different fathers, many raised single-handedly by their mother and her family or neighbours.

We drive up and around the hill, passing walls covered with street art and graffiti, and then down along the main street into the commercial centre of the favela, where we get caught in a traffic jam. There is every kind of shop imaginable – hardware stores, pharmacies, mini-marts, furniture stores, shops selling mobile phones, and even a surf shop – and they’re all full of stock and busy with shoppers. And there are plenty of simple restaurants and bars, all doing a roaring trade.

“It’s very safe for these people,” Louis tells us, “The only business to be robbed here was a bank, and it was robbed by policemen dressed as drug dealers! The drug dealers caught them, beat the **** out of them and dumped them and the bags of money in front of a police station!” There are no police in Rocinha now, Louis tells us, and if they do appear here, they’re either looking for thieves or drug dealers. 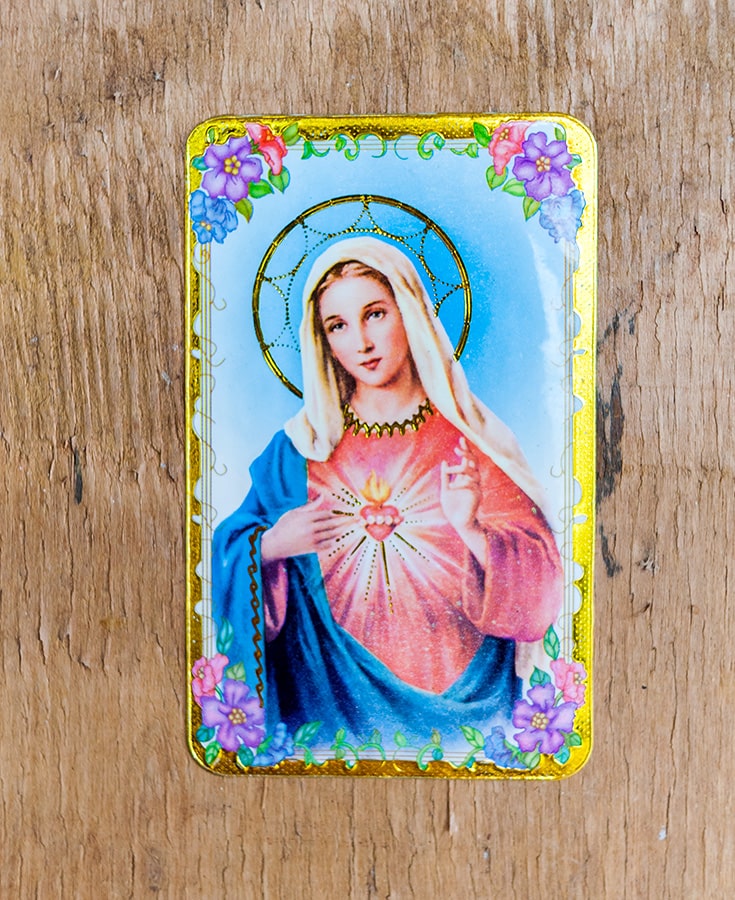 The streets are crowded and chaotic in the way Middle Eastern streets are, with stalls set up by the side of the road selling cheap watches, trinkets and snacks. There’s a bustling market and shops selling fresh meat, fruit and veg, and seafood, all looking glorious and of a far higher quality than anything we’ve seen so far in Ipanema.

We stop at a garage which Marcelo rents for the purpose of giving groups a bird’s eye view of the favela, and the view, down onto the rooftops of Rochinho, with their blue plastic water tanks and clotheslines dripping with washing, is jaw-dropping. Louis points out an area at the top of the community, beneath the jungle, where mudslides destroyed houses, killing hundreds. He shows us where public housing is being built for the homeless and people who continue to live in shacks in the most vulnerable places.

Our final stop is for a view of a different sort, breathtaking vistas down to Rio and the wealthy lakeside suburbs nestled among Rio’s many mountains. Some stalls are set up selling handicrafts, handmade clothes and accessories, and vibrant art. We don’t hesitate to buy some souvenirs. After a few hours spent snooping into these people’s lives, it’s the least we can do.

Marcelo Armstrong’s Favela Tours
3322 2727, www.favelatour.com.br
Marcelo offers two tours a day, including hotel pick-up and drop-off. Book well ahead by email as Marcelo is slow to respond to queries, then confirm by phone when you arrive. There are other favela tours, including a controversial jeep tour that’s considered to be purely voyeuristic, and another sustainable walking tour. While we would have liked to have walked around Rocinha, we relished the opportunity to visit Para Ti and meet the kids and we took comfort knowing our money was going towards the centre.