A street food tour of Mexico City was high on our agenda. We’ve always loved street food and love Mexican cuisine so when we arrived in the capital we signed up for a tour with Lesley Tellez of Eat Mexico.

One of our strongest food memories from our first trip to Mexico City in the Nineties is the smell of corn tortillas on the street, long before they were banned from being sold on the historic centre footpaths.

In the Middle East, where we lived for almost a decade, we’re smitten with the shawarma, we’d go anywhere for great falafel, and we’d climb hills for creamy hummus. One of our favourite assignments last year was an informal street food tour with a local chef in Amman, Jordan.

The made a street food tour of Mexico City high on our agenda.

While we’re familiar with Mexican cuisine, we have to admit that our knowledge of Mexican street food was fairly limited until this trip. Despite being cautious when it came to eating on our first few visits to Mexico many years ago, we experienced several ugly bouts of Moctezuma’s Revenge, putting us off street food for a while. A long while.

These days, our stomachs can pretty much handle anything – toughened up by our anything goes style of eating around the world in recent years, and the constant travelling that has prepared our bodies to deal with almost any kind of bacteria. 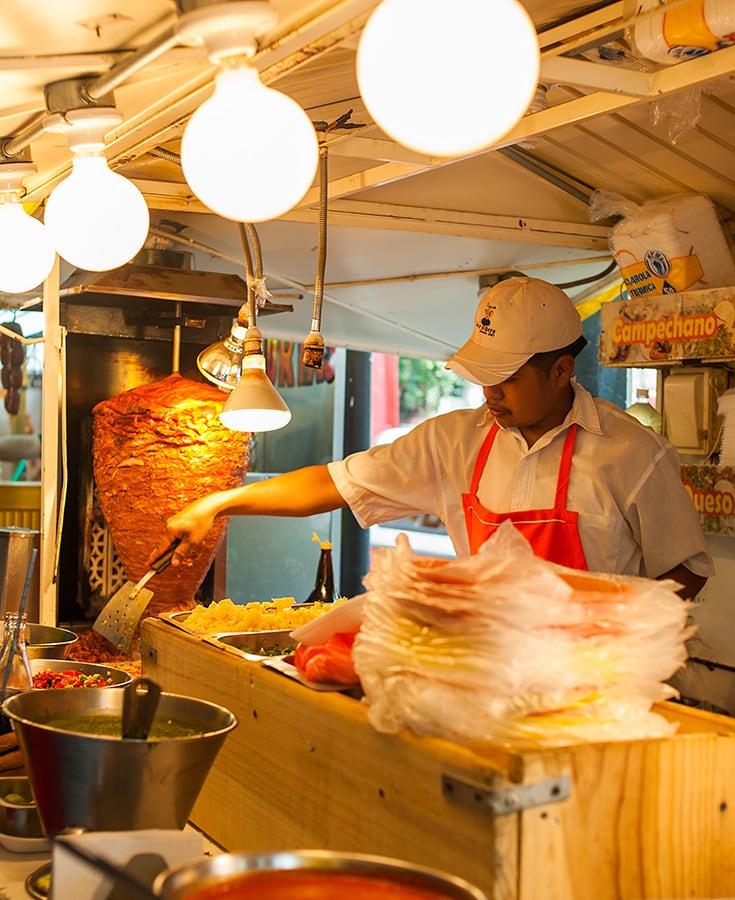 That, combined with the fact we fell in love with tacos all over again in Austin, Texas (thanks to a little help from our Taco Journalism friends), had us eager to sample more and put a street food tour of Mexico City at the top of our to-do list.

Fortunately, we didn’t have to look hard to find Lesley Tellez of Eat Mexico. A journalist living in D.F., Lesley offers food tours when she’s not learning the art of Mexican cooking and blogging at The Mija Chronicles. Lesley was the first food lover to offer a street food tour of Mexico City.

We kicked off our street food tour of Mexico City on Río Lerma in Colonia Cuauhtémoc where we met Lesley mid-morning. She shared her background as we began to walk. 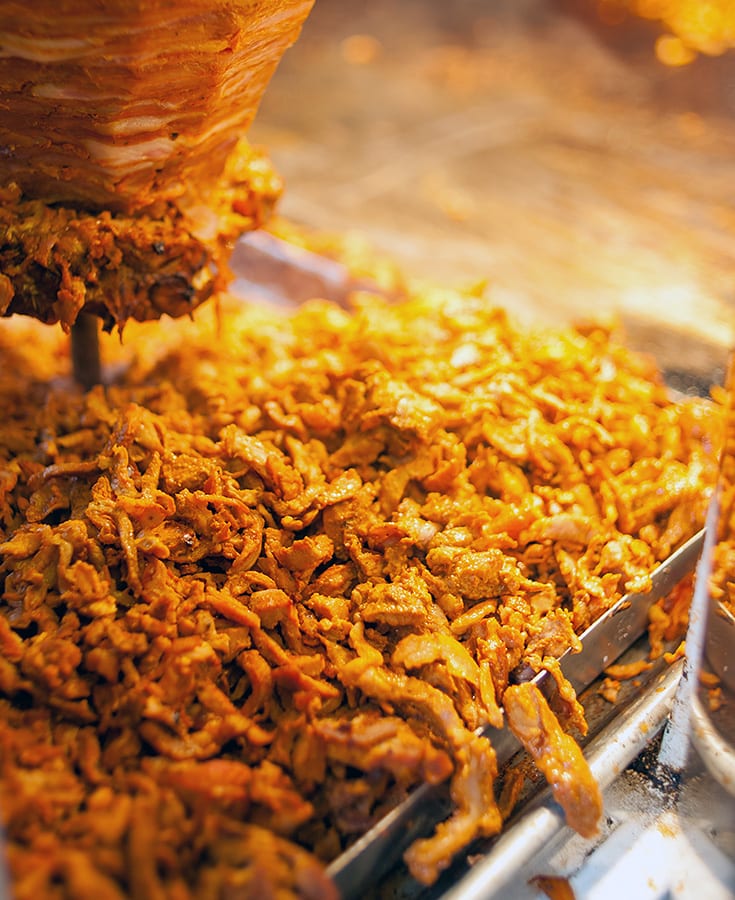 “I’m a third generation Mexican-American and I’m rediscovering my roots in a way,” Lesley revealed. “I started doing this because I was seeing so many people visiting Mexico City and missing out on this stuff. They are too scared to try street food or they don’t know what to eat or how to order it.”

“Street food is so ingrained in Mexican culture,” Lesley explained. “Some of these vendors have been here forever, like this woman on the corner who I’m going to take you to who has been selling here for 11 years.”

As we strolled, Lesley described the different types of street food that are sold at different times of the day – for example, tamales are only sold from around 8-10.30am – and signs to look for when deciding where to eat: “If it’s busy, it’s good! Also look out for cleanliness – you don’t want the same person making the food to be handling the money!” 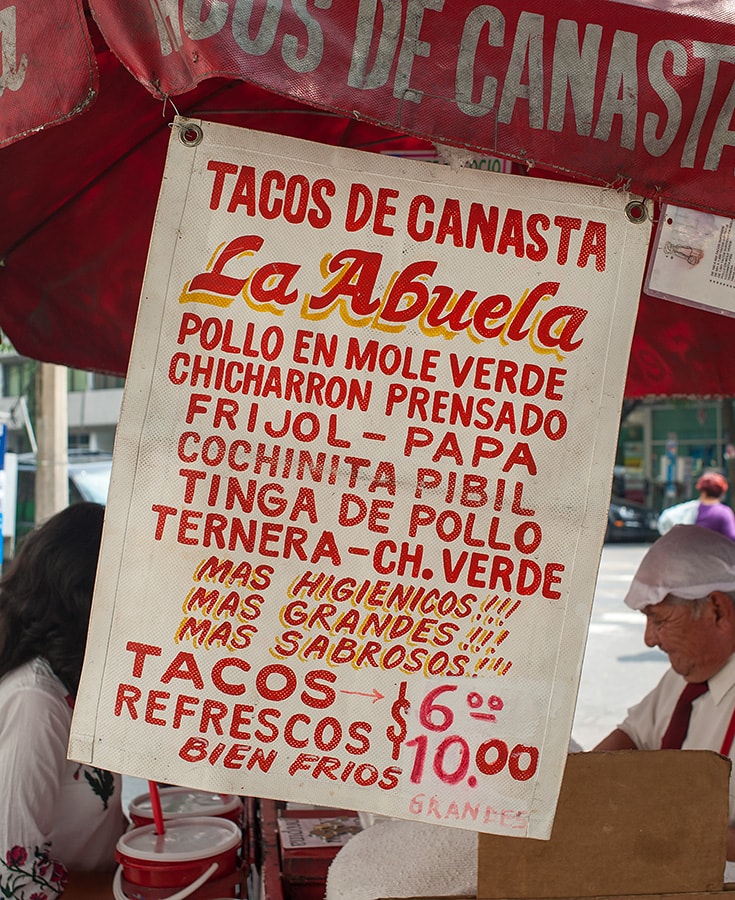 Lesley also shared the nuts and bolts of running a street food operation. The vendors pay ‘rent’ for their small space, but they don’t pay tax. “It’s kind of a grey area,” she revealed. “But people need to be fed so they fill a niche.”

We missed the tamale woman where Lesley usually starts her street food crawl – she’d obviously sold her treats and had gone home for the day – so we moved onto Tacos Don Güero on the corner of Río Lerma and Río Amazonas.

Here the specialty is tacos al pastor, the tacos that are synonymous with Mexico City, and are our favourite.

Grilled on a vertical spit with a pineapple on top, the meat is continuously shaved off and kept warm on the grill beneath it, then placed on the tortilla, along with onion, salsa and cilantro (coriander), to order. 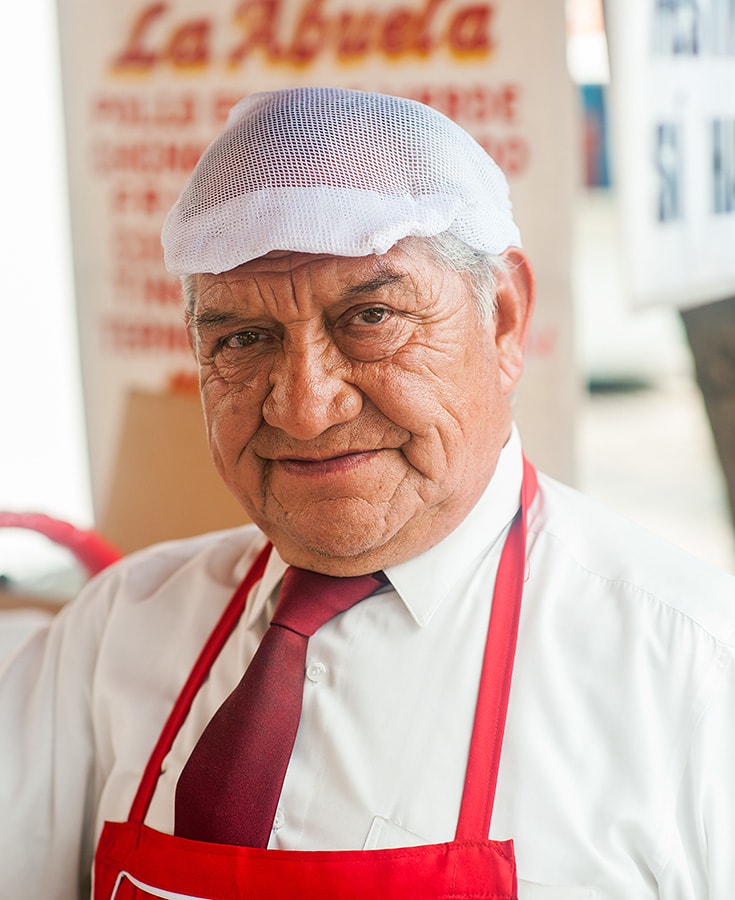 An ancestor of the shawarma, which my research had already revealed was brought to Mexico by Lebanese and Syrian immigrants in the 1920s, the main differences between the two are the types of spices used and that pork that is used in Mexico, instead of lamb or chicken, which are used in the (Muslim) Middle East.

Coincidentally we’d noticed this stand when we wandered by a couple of days earlier and had intended to return. We’re glad we have and we’re not disappointed. The pork tacos are incredibly tasty.

“It’s unique to find taco places open this early. Tacos are more of an evening thing,” Lesley revealed. “But what I really love about tacos is that they’re not just a food; they’re a way of eating!”

Our next stop on our street food tour of Mexico City was the stand of the woman who Lesley told us had been working on the street for eleven years selling her tlacoyos, fried masa patties that look a bit like fat, oval-shaped tortillas. 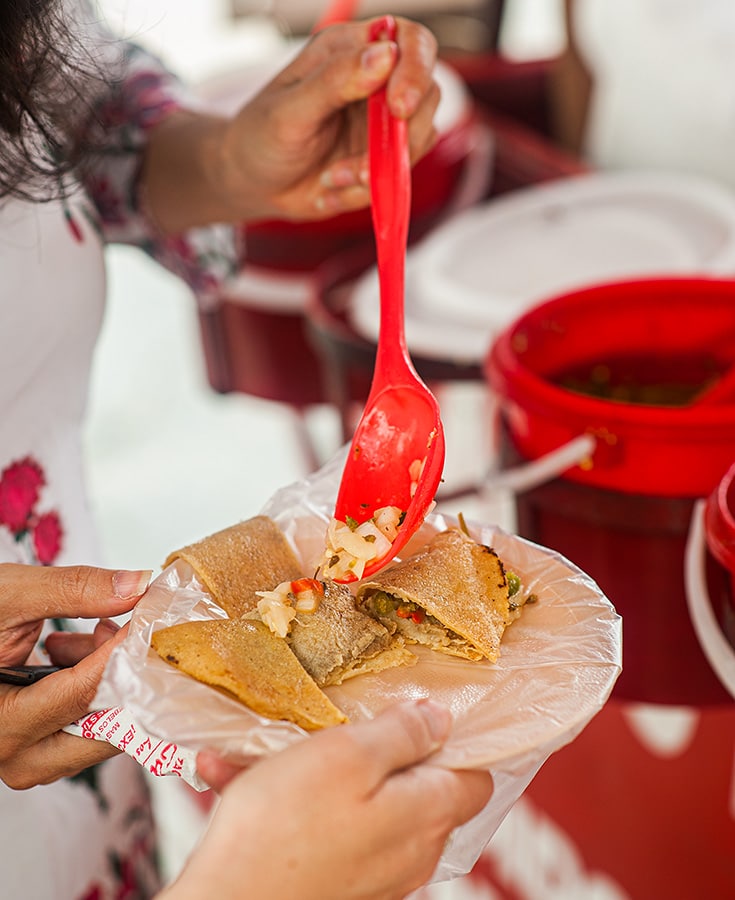 A short amble away on the corner of Río Lerma and Río Rhin, we stopped at La Abuela, where a dapper old gentleman in a smart tie and shirt was selling tacos de canasta or ‘basket tacos’.

The pre-prepared tacos are filled while both the tortillas and fillings are hot, put in a basket, and covered with a cloth, so that they’re almost steamed. We tried the cochinita pibil (slow roasted pork) and tinga de pollo (spicy stewed and shredded chicken with chipotle) and they were both scrumptious and very moreish. 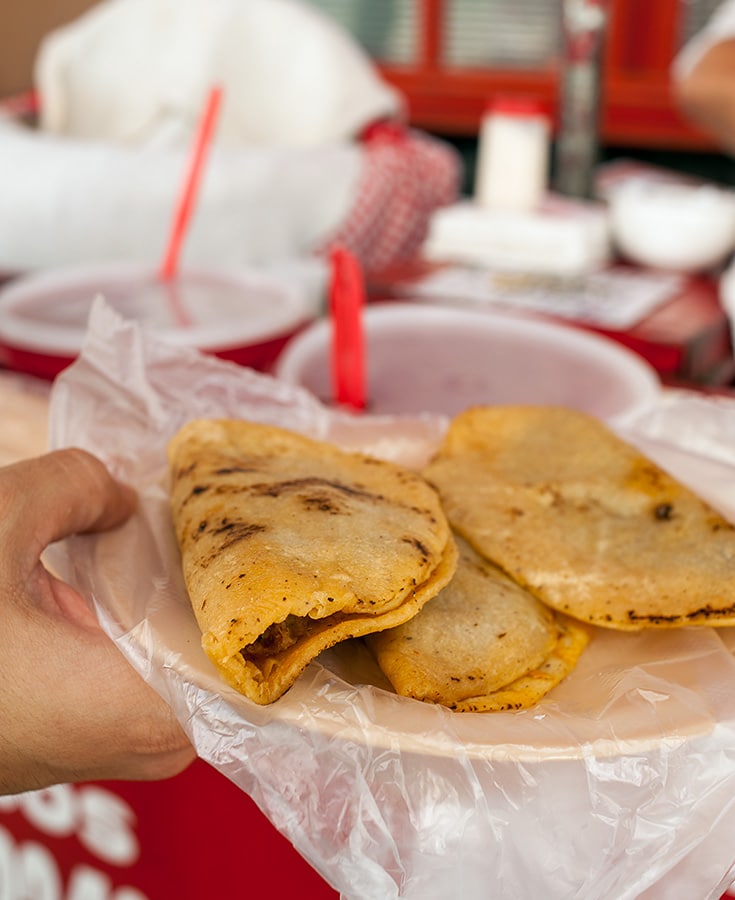 Our last stop was a busy no-name stand, manned by two amiable young guys who looked like they took their job as seriously as we took their tasty carnitas or ‘little meats’.

The specialty is the succulent pork, slow-cooked in lard in a cauldron of sorts before being roasted. You can order specific cuts, such as the nana (uterus) or trompa (snout), buche (throat), and lengua (tongue), or, as we did, order sortida, a combination of pork pieces mixed with the fatty bits. It was sublime.

“These places never have any signs,” Lesley warned. “Look for the glass case with pork steaming inside, and listen for the sound of chopping on a wooden breadboard,” Lesley suggested. A great tip, among many.