My potato and bacon soup recipe makes a comforting bowl of chunky potato and bacon soup topped with crispy bacon, crumbled croutons and crunchy fried shallots. Textured and loaded with umami thanks to the bacon and toppings, it’s a hearty and warming bowl of soup that more closely resembles a stew. Grind some fresh black pepper or sprinkle on chilli flakes for added warmth.

I should probably have declared September ‘Potato Soup Month’, as I’ve found myself sharing four potato soup recipes this month, as regular readers might have noticed from the compilation of our most popular recipes of September we published yesterday.

If you’ve enjoyed our recipes or other content on the site, please consider supporting Grantourismo. You could make a small donation to our epic original Cambodian cuisine history and cookbook on Patreon or buy us a coffee and we’ll use that donation to buy cooking ingredients for recipe testing.

Another option is to use our links next time you’re planning a trip to book accommodation, rent a car or campervan or motorhome, buy travel insurance, or book a tour on Klook or Get Your Guide. Or buy something on Amazon, such as these James Beard award-winning cookbooks, cookbooks by Australian chefs, classic cookbooks for serious cooks, cookbooks for culinary travellers, travel books to inspire wanderlust, or gifts for Asian food lovers, picnic lovers and travellers who love photography. We may earn a small commission but you won’t pay extra.

You could also shop our Grantourismo store on Society6 for gifts for foodies, including fun reusable cloth face masks designed with Terence’s images. Now let’s tell you all about this potato and bacon soup recipe.

You could enjoyably slurp it as it is on a chilly autumn or fall evening, dunking toast into the silky broth, or add more texture, flavour and aroma by sprinkling on crushed croutons, fresh fragrant dill and cracked black pepper.

This hearty baked potato soup recipe was also popular with readers. It makes a creamy potato soup topped with crispy bacon, sour cream, cheddar cheese, and spring onions. It’s not made with baked potatoes, but rather is inspired by the traditional British baked potato or jacket potato with toppings sold by street hawkers in London in the mid-1800s.

I love both potato soups, but I have to say that I have a soft spot for this more rustic chunky potato soup made with sautéed cabbage, smoky pork sausage and butter beans, garnished with fresh fragrant dill and a dollop of sour cream. Perhaps because I based it on my Russian-Ukrainian baboushka’s recipe for a cabbage soup called shchi. 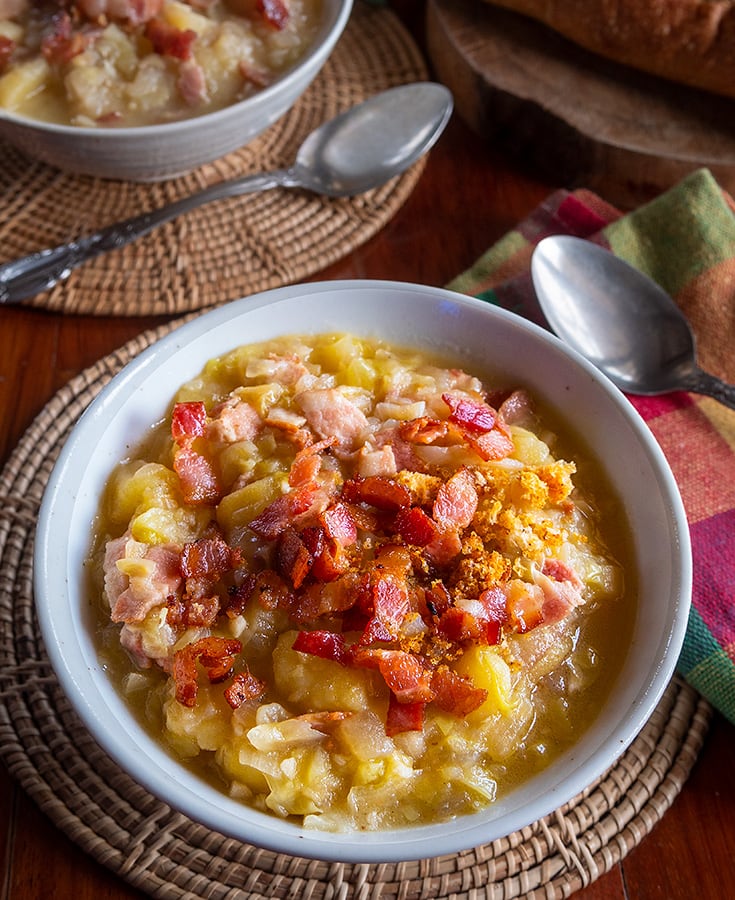 Today’s potato and bacon soup recipe was inspired by that chunky potato broth and it’s really a variation of that. Just a few ingredients set them apart, such as bacon, which gives it loads of umami. I use six bacon rashers, but you could reduce the bacon if needed and it will still have plenty of flavour.

It’s also a very versatile soup. You can substitute vegetables (I also enjoy carrots in this; mushrooms also work), seasonings and spices (paprika or chilli flakes add more warmth), and toppings and garnishes (fried mushrooms and fresh herbs), and really transform it but know that it’s still going to be deliciously comforting.

It’s also a perfect soup if you’ve been doing more meal planning, batch-cooking and freezing dishes to save money. Know that you’re not alone! The soaring inflation and cost of living crisis is being felt in so many countries around the world.

This potato and bacon soup recipe is perfect for batch-cooking and freezing, as long as you’ve got a big soup pot and even bigger freezer, because unlike a lot of soups, this potato soup freezes well.

I pour the chunky potato soup into reusable freezer bags such as ziploc bags in single portions and freeze them. After defrosting, I end up with a wonderfully creamy potato soup, one which served as a very comforting and warming soup for lunch today. 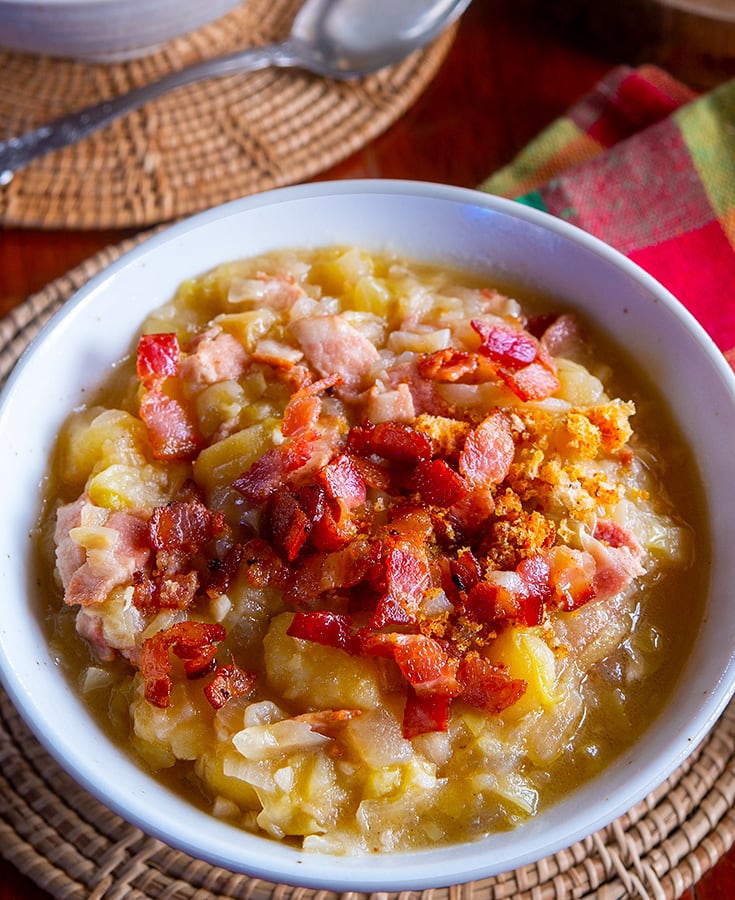 Tips to Making this Potato and Bacon Soup Recipe

This potato and bacon soup recipe recipe calls for stock. We almost always have homemade stock in the fridge, which I make regularly using this simple method I explained in this chicken and potato soup recipe, however, you could certainly use a store-bought stock, chicken bouillon or chicken stock cubes.

I boil the diced potatoes separately first so they break down faster and while the potatoes are boiling I fry the bacon in a wok. I use a round flat bottomed wok, because we live in Southeast Asia and I use it for everything and love it, but you could use a fry pan or skillet.

I fry the bacon slices until crispy and use a slotted spoon to scoop out the fried bacon so I don’t lose much of that wonderful bacon fat, as I’ll then use that and olive oil to fry the onions and garlic.

I then transfer that, and the stock, bay leaves, sea salt, and white pepper, to a soup pot and while that’s simmering, I stir-fry the shredded cabbage in olive oil, then transfer to the soup pot, along with the potatoes and about three quarters of the crispy bacon.

Bring it all to a boil, reduce the heat and simmer for around 15 minutes so the potato breaks down even more. You should have a thick and chunky soup by now. Taste it and season with additional salt and pepper – or even chilli flakes, if you like.

We use homemade croutons and I crush them a little in a mortar and pestle so they’re crumbly and I also have some crumbs.

Once I’m happy with the consistency, I use a ladle to transfer the soup to bowls, drizzle on a decent quality extra virgin olive oil, sprinkle on the semi-crushed croutons, crispy fried shallots, and sometimes I’ll add that optional dollop of sour cream and a sprinkle of chilli flakes or cracked black pepper to taste.

Serve immediately with crusty bread or toast and additional bowls of sour cream and croutons.

Potato and Bacon Soup Recipe with Crispy Bacon and Croutons

Please do let us know if you make this potato and bacon soup recipe as we’d love to hear how it turned out for you.