My chunky potato soup recipe makes a hearty, creamy potato soup with sautéed cabbage, smoky pork sausage and butter beans that’s garnished with fresh fragrant dill and a dollop of sour cream. It’s a deliciously filling broth that’s perfect for an easy mid-week meal or lazy weekend when you’re in the mood for staying in and hugging a comforting bowl of soup.

After a week of glorious blue skies here in Siem Reap – and it is still rainy season – it’s been grey, cloudy and a cool 24°C these last two days (yes, we’ve well and truly acclimatised), which was enough to get me in the kitchen making some of my favourite soups.

First up, I’m sharing this chunky potato soup recipe for a creamy potato soup made with boiled potatoes, fried cabbage, smoky pork sausage and butter beans, to which I add fresh dill and finely chopped parsley, and a dollop of sour cream, which I stir through just before eating.

My chunky potato soup recipe makes an Eastern European style soup, based on my Russian-Ukrainian baboushka’s recipe for a cabbage soup called shchi, although I leave out the dried spices, flavouring the broth with garlic, bay leaves and fresh herbs, and seasoning simply with salt and white pepper, so it’s more family-friendly.

Now before I tell you more about my chunky potato soup recipe, I have a favour to ask. Grantourismo is reader-funded. If you’ve enjoyed our recipes or other content on the site, please consider supporting Grantourismo. You could make a small donation to our epic original Cambodian cuisine history and cookbook on Patreon or buy us a coffee and we’ll use that donation to buy cooking ingredients for recipe testing.

Another option is to use our links next time you’re planning a trip to book accommodation, rent a car or campervan or motorhome, buy travel insurance, or book a tour on Klook or Get Your Guide. Or buy something on Amazon, such as these James Beard award-winning cookbooks, cookbooks by Australian chefs, classic cookbooks for serious cooks, cookbooks for culinary travellers, travel books to inspire wanderlust, or gifts for Asian food lovers, picnic lovers and travellers who love photography. We may earn a small commission but you won’t pay extra.

You could also shop our Grantourismo store on Society6 for gifts for foodies, including fun reusable cloth face masks designed with Terence’s images. Now let’s tell you all about this chunky potato soup recipe.

Perhaps because we’ve spent so long in mainland Southeast Asia, where the soups are typically light and clear and the toppings restrained – the easiest way to identify a soup made in the diaspora is that it’s so abundant with ingredients, it could feed two! – when the sky is grey and the temperature drops a few degrees I’m craving dense broths like my baboushka made.

Don’t get me wrong, I absolutely adore Southeast Asian soups such as nom banh chok and kuy teav. The broths may be thin but thanks to the fresh noodles, fragrant herbs and aromatic spices they’re full of flavour. I just sometimes yearn for the hearty home-style soups of my childhood and perhaps that’s nostalgia more than anything.

This chunky potato soup recipe makes my take on the beloved Russian soup called shchi – for which I also have a recipe (link above), which makes an incredibly delicious soup. As you can see from that recipe, they’re a bit ‘same same but different’, as we say here in Southeast Asia, but Eastern European in style. 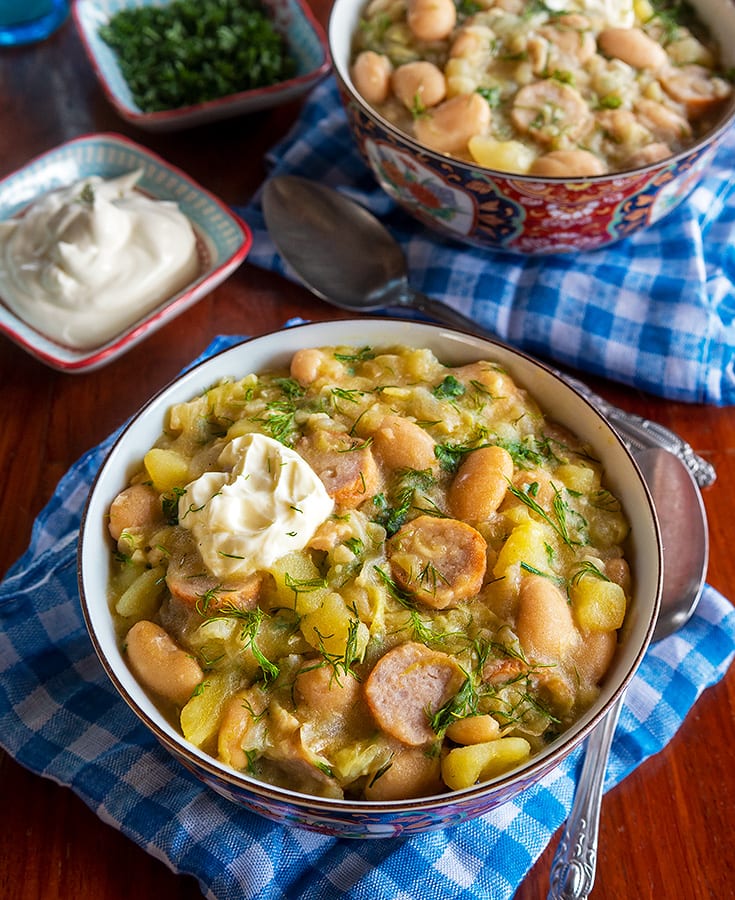 My chunky potato soup could be from anywhere but is from nowhere in particular, however, for me it’s the boiled potatoes, fried cabbage, pork sausage, fresh dill, and sour cream that make it distinctly Eastern European and Russian-Ukrainian for me.

I only have few tips to share with you for making my chunky potato soup recipe as it’s really a cinch. This recipe calls for chicken stock and pork sausage, but for a vegetarian version you can use vegetable stock instead, or even water and bump up the seasoning and herbs.

We always have homemade chicken stock in the fridge, which we make when we poach chicken breasts using this super simple method I explained in this chicken and potato soup recipe. 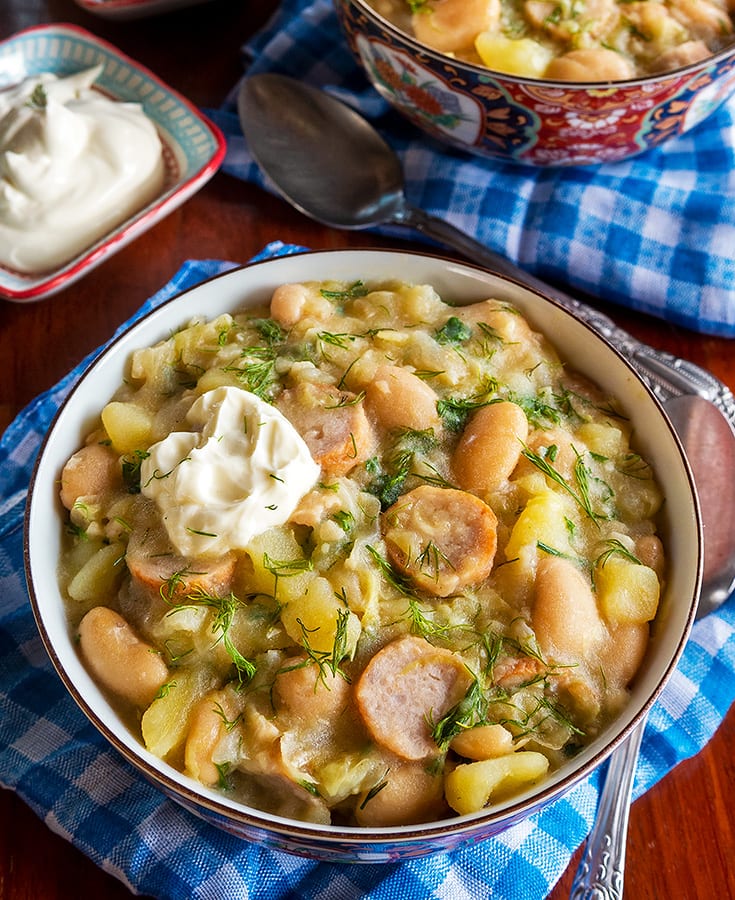 My Russian-Ukrainian grandmother used a kind of soft smoky pork kielbasa or Polish sausage in her soups, which were easy to get in local delis, and added loads of flavour. We can’t get them here, so I’ve used a British smoky pork sausage.

While this chunky potato soup recipe is easy to make and comes together in 40 minutes or so, you can certainly leave it to simmer longer and the potato will break down even more, creating an even denser soup.

If you want the soup creamier, add the sour cream just before serving and stir it through the soup. If you prefer a thinner soup, simply add more stock or water, but don’t forget to adjust the seasoning and herbs.

As far as herbs go, I love adding fresh dill and fresh parsley – but Terence tells me not everybody is as smitten with dill as I am, so you could use a combination of fresh parsley and celery leaves or whatever you prefer.

Please do let us know in the comments below if you make this chunky potato soup recipe for a hearty potato soup with cabbage, pork and butter beans, as we’d love to know how it turns out for you.