This classic pavlova recipe with kiwi fruit and history of Australia’s signature dessert comes courtesy of food writer Matt Preston, whose recently-released World of Flavour, The Recipes, Myths and Surprising Stories Behind the World’s Best-Loved Food is a cookbook as much as a myth-busting culinary history that finally sets the record straight: pavlova is Australian, not from New Zealand.

If you enjoyed Matt Preston’s spaghetti bolognaise recipe and history of ‘spag bol’, which we recently published, and you’re also a lover of that other great Australian dish, the pavlova, then you’re going to love Matt Preston’s classic pavlova recipe with kiwi fruit and his history of pavlova, Australia’s favourite dessert.

Matt Preston explores the compelling origins of the pavlova and shares his easy pavlova recipe with kiwi fruit in his just-released cookbook World of Flavour, The Recipes, Myths and Surprising Stories Behind the World’s Best-Loved Food, and we’re publishing an extract from the book and Matt Preston’s pavlova recipe, below, thanks to his publisher, Penguin Random House Australia.

Before we share Matt Preston’s classic pavlova recipe with kiwi fruit and the history of pavlova, we have a favour to ask. Grantourismo is reader-funded. If you’ve cooked and enjoyed our recipes and their stories, please consider supporting Grantourismo. One option is to donate to our epic, original 8-years-in-the-making Cambodian cuisine history and cookbook on Patreon or buy us a coffee and we’ll use our coffee money to buy cooking ingredients for recipe testing.

Another option is to buy something on Amazon, from which we’ll earn a small commission, such as these cookbooks for culinary travellers, James Beard award-winning cookbooks, cookbooks by Australian chefs, classic cookbooks for serious cooks, and gifts for Asian food lovers and picnic lovers. You could also use our links to buy travel insurance, rent a car or campervan or motorhome, book accommodation, or book a tour on Klook or Get Your Guide. Or browse our Society6 store for gifts for food lovers, including fun reusable cloth face masks designed with Terence’s images.

Matt Preston’s pavlova recipe with kiwi fruit and his myth-busting history of pavlova, Australia’s favourite dessert, below, are reproduced from his new cookbook World of Flavour, The Recipes, Myths and Surprising Stories Behind the World’s Best-Loved Food. Along with the images, they are published with permission of Penguin Random House Australia. (Edited for formatting only.)

The History of the Pavlova According to Matt Preston

“It has become a source of some national shame that Australia’s signature dessert might actually be the creation of our trans-Tasman rivals. Well, I am here to tell you not to worry. We’ve got this, Australia!

Russian prima ballerina Anna Pavlova toured Australia and New Zealand in 1926, and Australia again in 1929. Both tours were the biggest cultural events in those years.

Many New Zealanders will tell you that pavlova was created in 1926 by an unnamed Wellington chef who decorated the dessert with kiwifruit in order to replicate the green roses on Anna Pavlova’s tutu. This is based on an unattributed story in a biography of Anna Pavlova written in the 1980s.

Emeritus Professor Helen Leach of the University of Otago dismisses this version of events in her book The Pavlova Story: A Slice of New Zealand’s Culinary History, as she could find no evidence to support the claim. Leach’s research did, however, find three desserts from this period named after Anna Pavlova.

First, a 1926 layered jelly that features neither cream nor meringue, in a New Zealand recipe pamphlet from the Davis Gelatine Corporation.

Then there’s the Dunedin version of pavlovas, which were small coffee and walnut meringue kisses, which also sound nothing like our pavlova recipe.

The closest thing (to our pavlova recipe) is a 1929 Kiwi recipe for ‘pavlova cake’, where the meringue is split and filled with cream and preserved fruit, like a meringue version of a Victoria sponge.

It was a recipe for one of these meringue cakes published in the Australian Woman’s Mirror magazine in 1935 that Western Australian chef Bert Sachse was seeking to improve upon when he created his cream and fruit topped dessert and called it simply ‘pavlova’. 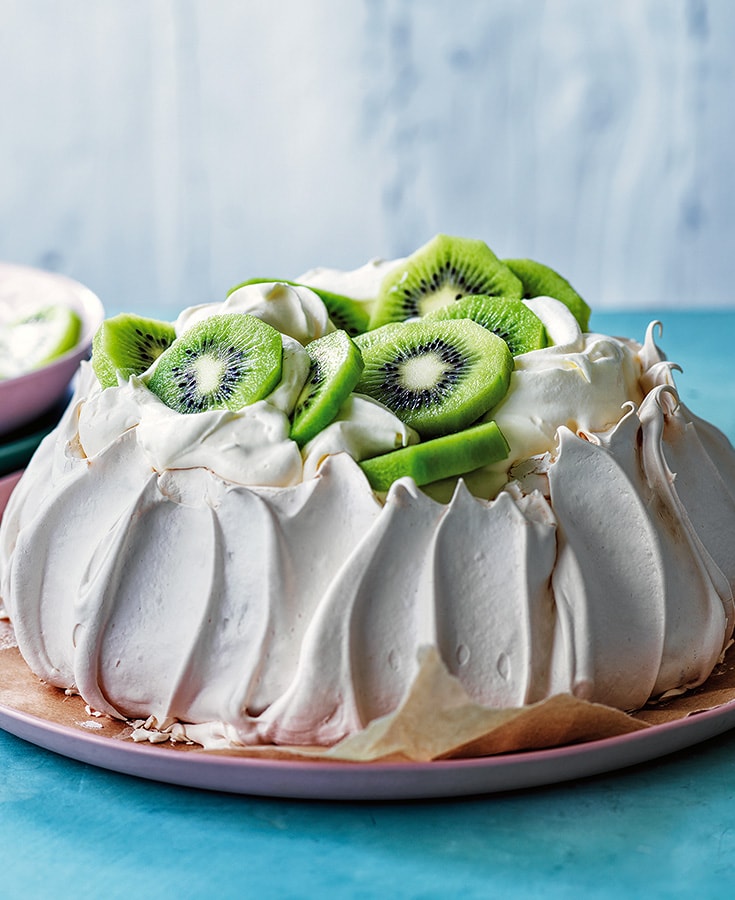 Sachse was head chef at Perth’s Esplanade Hotel, where Anna Pavlova had stayed in 1929, and it was his version of the pavlova that went on to become a worldwide hit.

Kiwi claims of pavlova ownership hinge upon the fact that the meringue cake in the magazine was credited to a New Zealand reader, which fails to acknowledge that Bert’s creation was a distinct improvement on and development of the recipe.

It’s also something of a moot point, because we can show Australia had meringue cakes before they appeared in New Zealand. The recipe most commonly cited as New Zealand’s earliest filled meringue cake was in the 1926 edition of Emily Futter’s Home Cookery for New Zealand.

However, in 1922, a very similar recipe for meringue with cream filling had appeared in Australian Home Cookery. That’s unsurprising, because Miss Emily Futter was the author of that tome as well! So surely this means the dessert Sachse was inspired by was originally Australian?

I’d also suggest that what makes a pavlova a true pav is that the meringue is topped with cream and fruit rather than filled with it. That’s what made Sachse’s pavlova recipe special, and what we love about pavlova today.

Here, too, Australia has the first claim, in the 1928 recipe for a ‘meringue cream gateau’ in NSW’s Molong Express, which is a pavlova by another name, the pavlova meringue is even made with vinegar, like some modern pavlovas, and then topped with whipped cream and preserved fruit.

To close the case, I refer to the excellent research of New Zealander Dr Andrew Paul Wood and Australian Annabelle Utrecht, who have made it their quest to shed light on the pavlova recipe’s origins.

Utrecht dismisses the idea that New Zealanders were the first to name a dessert after Anna Pavlova, pointing to a US ice cream bombe called ‘strawberries Pavlova’ that appears at the turn of the century.

Wood and Utrecht also argue that the meringue cake on which the New Zealand claim is based is actually a simplified descendant of the layered meringue cakes of the Austrian Habsburg Empire, such as the late-eighteenth-century Spanische Windtorte, or ‘Spanish souffle cake’.

This is a nest of crisp meringue filled with fruit, cream and currants or grated chocolate, which is then topped or closed with a sheet of meringue. There’s no pillowy marshmallow centre, however, and no use of vinegar or cornflour.

In the nineteenth century, descendants of that Austrian layered souffle cake – like Germany’s schaum torte (aka foam cake) and baiser torte (aka kiss cake) – spread around the world with migration.

German migrants who moved to the American Midwest in the mid-1800s took the schaum cake with them, and mentions pop up in German-language US newspapers of the time, like in Die Freie Presse für Texas (‘The free press for Texas’) in 1884. 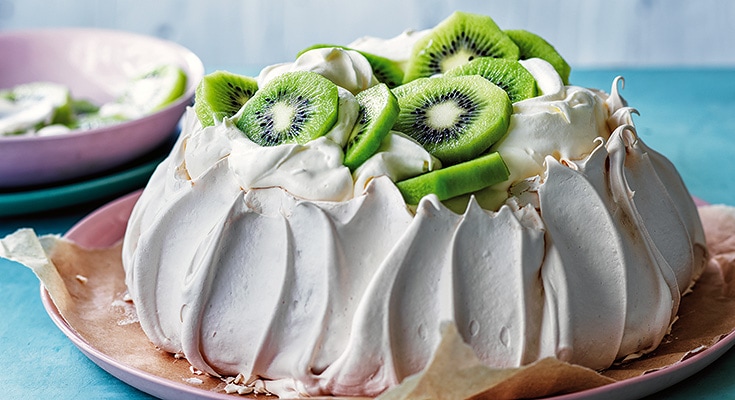 Is now the time to note that the parents of Bernard Herbert Francis (aka Bert) Sachse emigrated from Tschausdorf, Prussia, around 1855?

The first recipe for schaum torte in Australia appears in the Adelaide Mail in 1935, the same year that Bert created his pavlova in Perth. It instructs for the upper crust of the meringue to be broken off before the void inside is filled with fruit, and then the cream, with the broken crust, be used as garnish.

Now, I’d love to say that this filling of the meringue and adding the fruit first is enough to class the shaum torte as mere inspiration for our Molong meringue cream gateau, and I would, had I not discovered a recipe for ‘German Dessert’ in a May 1913 edition of the Ogden Standard from the US state of Utah.

This is a large meringue made with vinegar and topped with crushed fruit and cream. So, it seems that we’ll have to share the pavlova honours with the United States – especially as the first recipes for adding cornflour to meringues also came from the US, in corn starch manufacturers’ recipe booklets of the 1860s.

Barring the discovery of new evidence that would lead to this case being reopened, I’m happy to stand behind the claim that the first true pavlova recipe was created by Bert Sachse, even if it was based on a culinary idea that came from Germany or the US.

Tips to Making this Pavlova Recipe with Kiwi Fruit

Yes, you can top the pavlova with strawberries, raspberries, pitted cherries, pith-free orange segments spritzed with rosewater, and so on – or, use three mangoes and two passionfruit, if you want to be parochially Aussie.

You could even use Chinese gooseberries – which is what kiwifruit used to be called in English before New Zealanders hijacked them too!

As its archaic name suggests, the Chinese gooseberry finds its root in China. Its original name in Chinese, mihoutao – meaning ‘macaque fruit’ – refers to the monkeys’ love for it, according to the Compendium of Materia Medica, a sixteenth-century Chinese medical encyclopaedia by Li Shizhen.

The earliest mention of the fruit dates back to the Song dynasty in the twelfth century.”

Matt Preston’s extract on the history of pavlova, his pavlova recipe with kiwi fruit, below, and images from his new cookbook World of Flavour, The Recipes, Myths and Surprising Stories Behind the World’s Best-Loved Food, are republished here with permission from his publisher Penguin Random House Australia. You’ll find Matt Preston on @mattscravat.

Please do let us know if you make Matt Preston’s classic pavlova recipe with kiwi fruit in the comments below as we’d love to know how it turns out for you.