When you go out on safari in Africa, no two days are the same. You might spot plenty of wildlife, perhaps even the Big Five. Or you might not. Regardless, the opportunity to get out of your comfort zone and into an environment you wouldn’t normally find yourself in can be a heap of fun. But a Jazz Safari?

That’s how it was with our Cape Town Jazz Safari, a small-group tour started by sustainable travel companies such as Coffeebeans Routes and Andulela, whose jazz aficionado owners wanted to give visitors to Cape Town a chance to discover the rhythm of the city’s culture through its jazz and experiences places they probably wouldn’t get to on their own. 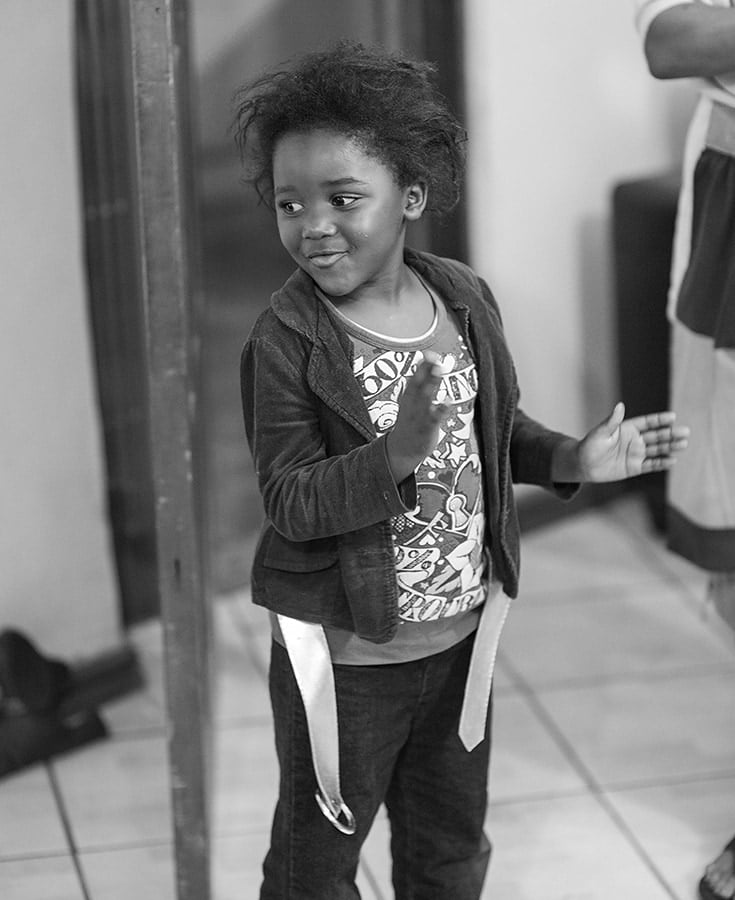 Why jazz? Music has always been central to Cape Town’s life, beginning with the goema drums and chants of the indigenous Khoe-Khoe, and the rhythm and bass harmonies of the Bantu who migrated south. Like any port city, Cape Town has always absorbed the cultures of the peoples who have landed on its shores, including their music.

The Dutch, French and English colonisers brought military bands and their marching music, while slaves from other parts of Africa and Asia, especially Malaysia, brought their own musical styles. From the Americas came the music of Carnival, celebrated in Cape Town on the first two days of January, with colourful troupes of minstrels making music as they dance through the streets. Locals describe it as Brazilian in spirit and New Orleans in look and sound.

In the 1950s, via radio and the vinyl records which visiting sailors sold for $1 a piece, came jazz, and later, a uniquely Cape Town style of jazz that absorbed bits of all the musical influences that had come before it. Despite the city’s rich jazz history and abundance of talent, accessing Cape Town’s jazz scene can be challenging for locals to access, let alone travellers. And that’s how the Jazz Safari came about.

There are few better ways to get beneath the skin of a place than through its music and food. The Jazz Safaris give you a taste of both. These expeditions into the wilds of the city’s jazz scene take in a private informal performance and casual dinner at a musician’s home and a visit to a local jazz club. Jazz musicians being who they are and the jazz scene being the way it is – the key word being improvisational – no two tours are the same. 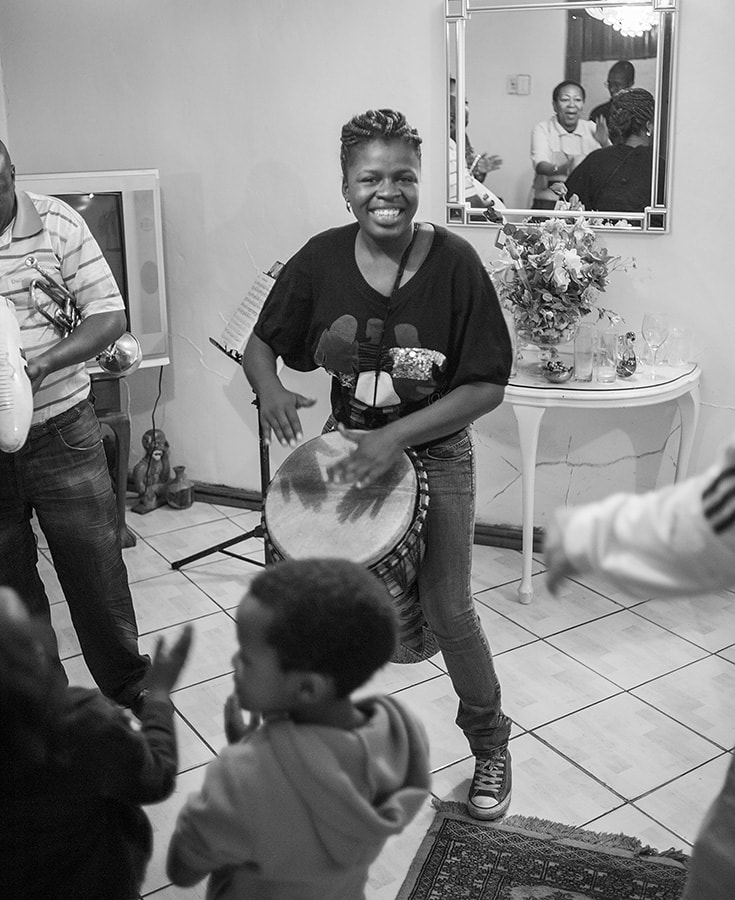 Previous Jazz Safaris have began at clubs such as Distrix Café where South African jazz legends such as Abdullah Ibrahim have performed, before moving on to the homes of one or two musicians, such as Mac McKenzie, Robbie Jansen or Hilton Schilder, for dinner at one, and a nightcap at another. The programme is relaxed: meet the muso and his family, talk music, play tunes, share a meal, chat some more, maybe play another tune.

On the night of our Jazz Safari, our first stop is the modest home of jazz trumpeter Fezekile ‘Blackie’ Tempi and his charming wife Sheila, in the township of Gugulethu. It’s the eve of Blackie’s departure for an eight-month tour to 15 theatres around the country performing 1960s jazz standards. It’s a big production and a job that pays the bills.

Our guide from Coffeebeans Routes, Michael, is a musician and music journalist, and we’re joined by Calum MacNaughton, a filmmaker currently completing a documentary on South Africa’s Goema grooves and carnival culture. 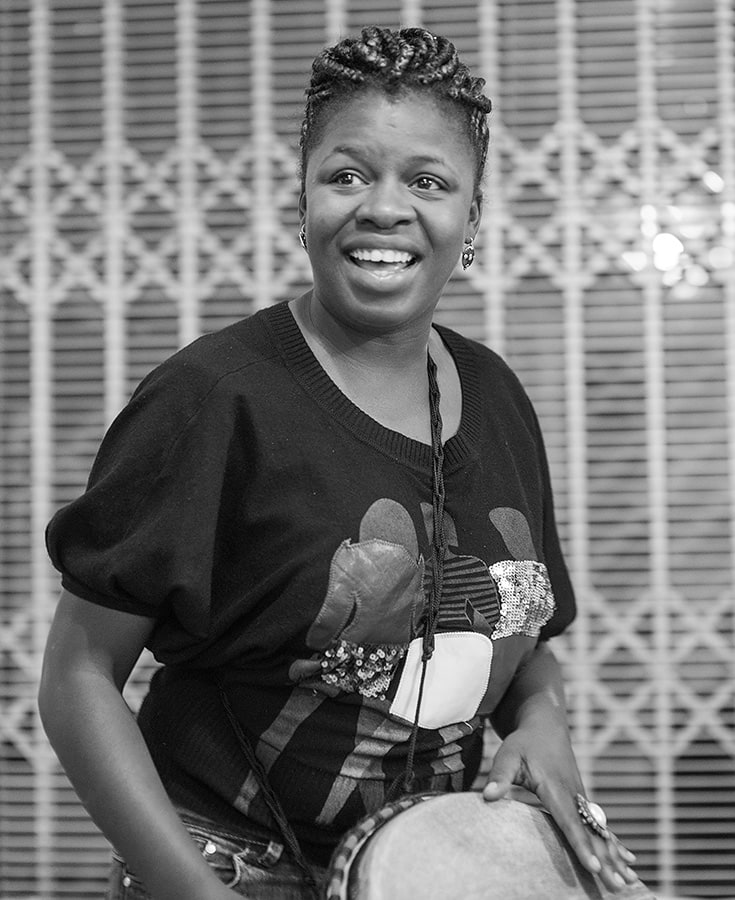 “Most people don’t know about the township musicians,” Calum tells us in the van on the way to Gugulethu. “There’s not much about these guys online. You can’t Google most of them. And you won’t find much on township music. Yet there are so many musicians and they’ve very accomplished.”

When we reach Blackie’s home we quickly appreciate that it is worlds away from our colossal holiday rental, as his ramshackle township neighbourhood is from ritzy – and predominately white – Camp’s Bay. Here, the streets are dimly lit, there are few cars parked at the curbs, and the diminutive houses butt right up against each other, often opening directly onto the footpath or street. There are no high walls, security boxes or luxuriant gardens in Gugulethu.

Compared to the two-storey, four-bedroom home we’re staying in, Blackie and Sheila’s one-bedroom, four-room house may be modest, but it’s a mansion compared to the surrounding corrugated iron shacks and box-like brick cottages. Later in the night the couple will proudly give us a tour to show us their recent expansion and renovations. 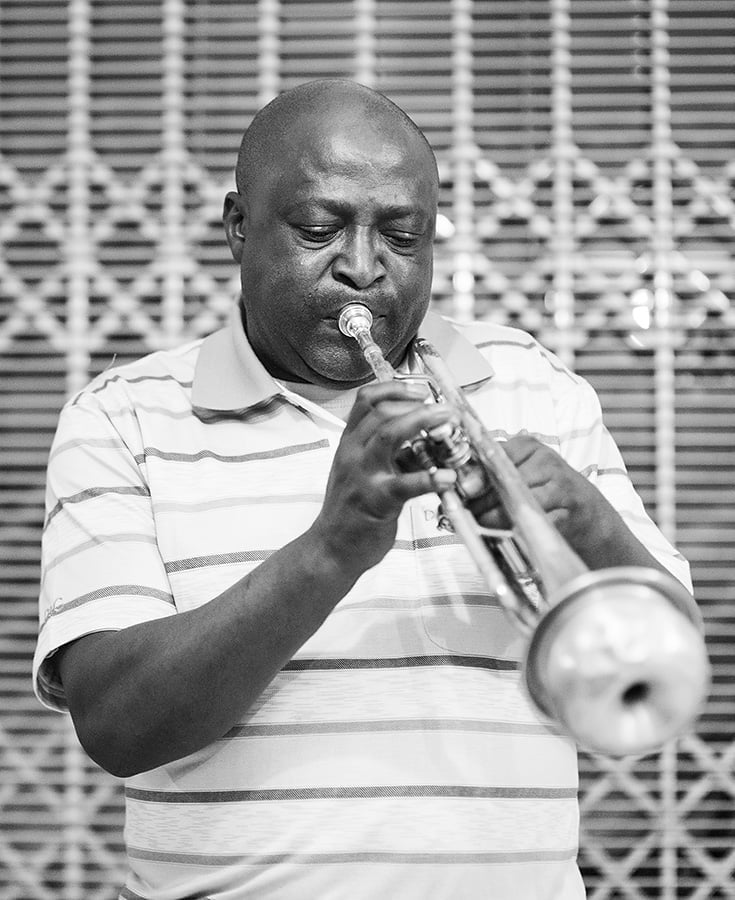 For now, they show us their hospitality and generosity of spirit. Blackie and Sheila’s niece Zani, and her cute daughter and her friend warmly welcome us at their door, and Zani immediately offers homemade ginger beer. Enticing aromas emanate from the kitchen where Sheila is preparing our meal while in the living room, where we are seated, Blackie already has his trumpet in hand.

A mostly self-taught musician, Blackie tells us how he started playing in his early 20s, in 1976, the year of the Soweto uprisings. At the time, Blackie says, he had no hope that he’d ever be able to get any formal training, so he started watching and learning from other bands.

“When the band took a break, they’d let me play around with their instruments,” Blackie tells us. “They’d tell me to be careful, because you could easily break a saxophone, but you could easily touch the trumpet, so that’s how I came to play the trumpet and I saved my money to buy one of my own.”

Trumpet players showed Blackie the basics, teaching him the scales and advising him which music books to buy, until 1979 when he took lessons at the Jazz Workshop. He completed only two years of a three-year performer’s diploma, because he couldn’t afford the fees, and started playing full time. These days, Blackie has no shortage of work, playing six days a week, but when we ask him to describe the music scene in the township, he admits it’s pretty dismal. 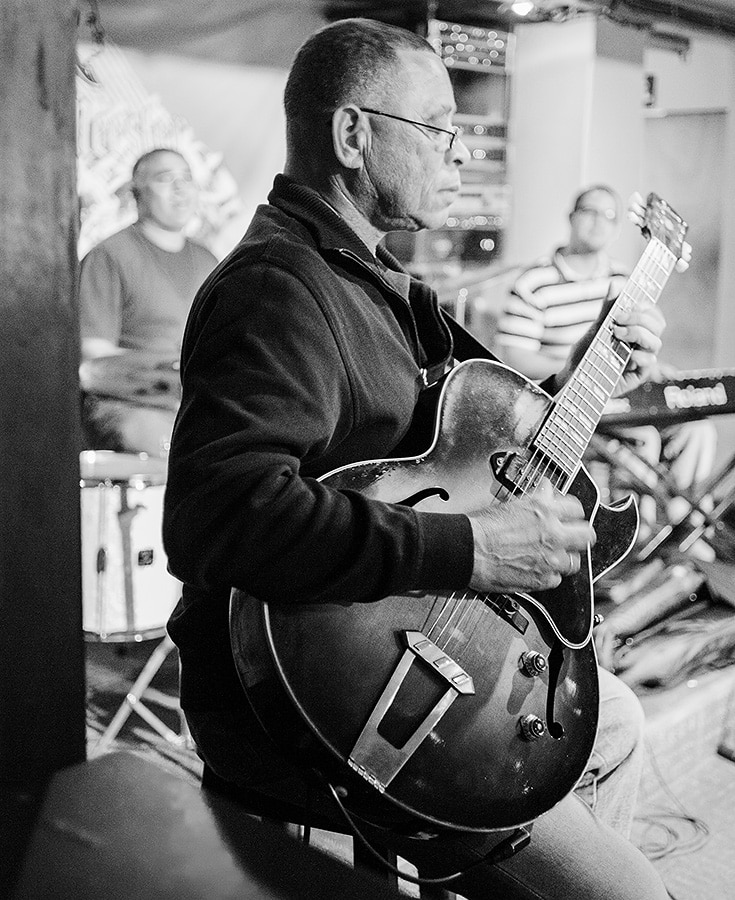 “There are no live music venues in the townships,” Blackie tells us. “Musicians put on their own shows, organizing the venue and posters. People will go to the shabeens (public bars) and ask musicians to perform but nobody in the townships wants to pay for anything so there are plenty of musicians around who are not working.”

Blackie plays us a few songs, including Thandanani – “it’s about the tension that was in the country and the message is “let’s love eachother and take it easy” – and Unomnganga, based on a traditional Xhosa song, which he says the jazz great Stompie Mavi inspired him to record.

While we’ve been watching Blackie play, the lovely Sheila has quietly laid out a buffet of traditional Xhosa dishes: semp beans, pap (the South African staple of maize meal), mixed vegetables, and her delicious ‘Chicken a la Sheila’, for which – eyes shining cheekily – she refuses to reveal the secret ingredients. As is the local custom, we serve ourselves and take a seat around the table. Over dinner, Blackie tells us about his dream…

“You need to be an entrepreneur here to succeed. A lot of good musicians can’t promote themselves so my dream is to return here and open a café or bar, buy a PA and some instruments, invite musicians to come and play, and create jobs in the township by employing people to cook, serve, clean… I don’t want to be poor the rest of my life so I have to become an entrepreneur.”

After our hearty home-cooked meal, we return, sated, to the living area where Blackie chats be-bop and plays us some Charlie Parker, and Michael requests South African jazz classics like Skokiaan.

“South African jazz has been on par with American jazz,” Blackie says, catching his breath from belting out a couple of songs. “I grew up listening to Coltrane and Davis and other jazz from the USA and at the time South Africa didn’t have enough to offer because our musicianship was limited. Now we’re better educated and our standards are high.”

Before we depart for our next stop to find out just how high, Blackie insists we hear Zani sing. Blackie’s charismatic niece doesn’t let us do this sitting on the sofa though. She grabs a drum and insists we get up and join her in a rhythmic dance around the living room to a wedding song that’s normally sang as a battle of choirs between families.

My lack of musical talent aside, it is powerful stuff to participate in and is an unexpected and up-tempo way to end this part of the evening. We buy Blackie’s CD on the way out the door, hoping that our small purchase, like our participation on this tour, can contribute to him one day fulfilling his dreams. 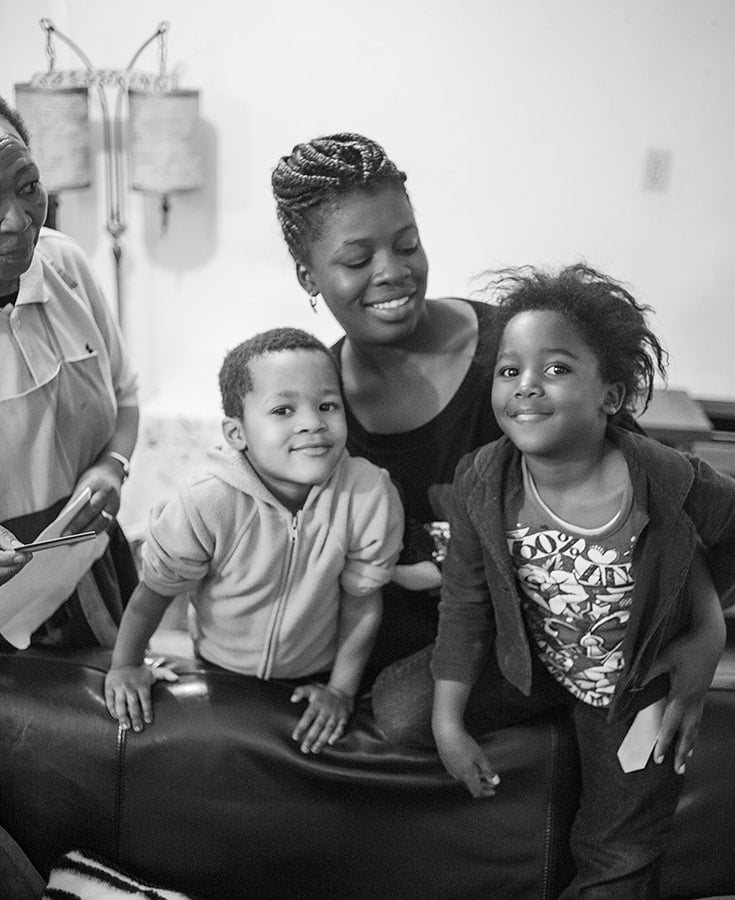 Our second and final stop tonight on our jazz safari is Swingers, a gritty jazz club in the township of Landsdowne, which hosts an open-mic night on Mondays after its resident band, the Alvin Dyers Quartet performs, fronted by revered jazz guitarist, Dyers. Swingers was suggested to us by locals who phoned in tips to African Mulane’s radio show so we’re pleased to be dropping by.

Its exterior looking like a vacant old warehouse, it’s rather cosy inside, with its bare brick walls, wooden floorboards, red tablecloths, and black and white photos of jazz greats on the walls, kind of like a cross between a New York jazz bar and an Australian RSL club.

Alvin Dyers is brilliant. Hunched over his Gibson guitar, he fluidly transcends the surrounds with his sharp playing. We’re transfixed at our table close to the stage as he runs up and down the freeboard. Beer and wine flow freely.

Later, during the open-mic segment of our jazz safari, a singer channelling Bob Marley fares less well than an incumbent guitarist reciting The Girl from Ipanema. While the applause is polite, it’s pleasing to see that Cape Town jazz aficionados are just as discerning as those in New York.

We did our Cape Town Jazz Safari tour with Coffeebeans Routes. Do buy a CD if there’s one for sale when you visit Blackie’s or one of the other musicians’ homes.