This comforting mushroom noodle soup recipe with handmade pasta called ‘lapsha’ makes a centuries-old Russian vegetarian soup. Historically eaten during the Orthodox Great Lent period of fasting, when eggs and sour cream would have been forbidden, this hearty nourishing soup with hand-cut noodles can be enjoyed at any time. Serve with plenty of fresh fragrant dill and rye bread.

It’s with a heavy heart that I share this mushroom noodle soup recipe for a Russian vegetarian soup made with hand-cut pasta called lapsha today. I love my soups, especially hearty Russian soups and Ukrainians soups, such as shchi and borscht, and I adore mushroom recipes, and there are few soups more satisfying to make and more enjoyable to eat than a soup with handmade noodles and mushrooms.

As I re-write the introductory text to this recipe post, however, Russian president Vladimir Putin’s forces are arriving in armoured vehicles and tanks in the Ukraine capital, Kyiv, having invaded the country yesterday. Many of the city’s residents will spend a second night in bomb shelters and subway stations, from which they’ll no doubt emerge in the morning to a very different reality.

While it was heartening to see hundreds of thousands of Russians protesting Putin’s war on Ukraine in scores of Russian cities overnight, including the heart of Russia’s capital Moscow and Putin’s hometown St Petersburg – with over 1,700 people arrested, including elderly baboushkas – harrowing images out of Ukraine today gave us all a glimpse into the violence and destruction to come.

Let’s hope for the sake of innocent Ukrainians who’ll have another sleepless night this evening that Russians take to the streets of Russia’s cities and towns to protest again tonight, that people around the world show their disgust and support, and that global leaders are able to persuade Putin and Russian forces to pull out of Ukraine immediately.

If you want to help the people of Ukraine, the best thing to do for now is to donate funds to established international non-governmental organisations such as the Ukrainian Red Cross, Save the Children and UNHCR, which are working with Ukrainian authorities to provide emergency cash and other assistance to Ukrainians. I’ll share more ways to help Ukrainians over coming days.

Before I tell you more about this comforting mushroom noodle soup recipe with hand-cut pasta, I have a favour to ask. Grantourismo is reader-supported. If you’ve enjoyed our recipes, including my Russian family recipes, please consider supporting Grantourismo by buying us a coffee (we’ll use the money to buy cooking ingredients for recipes we’re testing) or donating to our epic Cambodian culinary history and cookbook on Patreon.

Another way to support our site and our work here is by buying something from our Grantourismo Society-6 store, such as these gifts for food lovers or food-themed reusable cloth face masks, designed with Terence’s images.

You could also use our links to purchase travel insurance, rent a car or campervan or motorhome, book accommodation, book a tour on Klook or Get Your Guide or buy something on Amazon, such as these cookbooks for culinary travellers, James Beard award-winning cookbooks, cookbooks by Australian chefs, classic cookbooks for serious cooks, travel books to inspire wanderlust, and gifts for Asian food lovers and picnic lovers. We may earn a small commission but you won’t pay any extra.

This comforting mushroom noodle soup recipe with hand-cut pasta will make you a centuries-old Russian vegetarian soup. Traditionally eaten during the Orthodox Great Lent, which begins after Pancake Week or Maslenitsa next week and runs until Easter, this delicious broth provided so much nourishment that the forbidden meat, eggs and sour cream wouldn’t have been missed.

Though having said that, if you’re not an Orthodox Christian, I highly recommend a dollop of sour cream. Before I tell you more about this mushroom noodle soup recipe, I want to tell you a little more about my family and heritage and culture that I hope will shed a little light on this tragic situation, and even offer a little hope.

My Russian grandparents died decades ago and I miss them terribly. Not a single day passes without me taking some time to reminisce. I miss my living family members in Australia so much that it hurts. We haven’t been able to see since the pandemic and we still don’t know when we might see them again. Hopefully it won’t be too long, as it is times like these that I’m reminded how very important family is.

Cooking the food of my family – the dishes I watched my baboushka cook in her Blacktown kitchen as a child; that we all enjoyed over seemingly never-ending meals around my grandparents dining table – and exploring my culinary heritage is a way for me to connect with my family, living and dead.

As the grand-daughter of Russians born in the early 1900s in the land I now know as Ukraine, when it was part of the Russian Empire, I grew up listening to my baba and papa share stories of their homeland – always told around that same dining table – stories that were as beautiful and bittersweet as they were terrifying and tragic; tales of bliss, tales of loss. 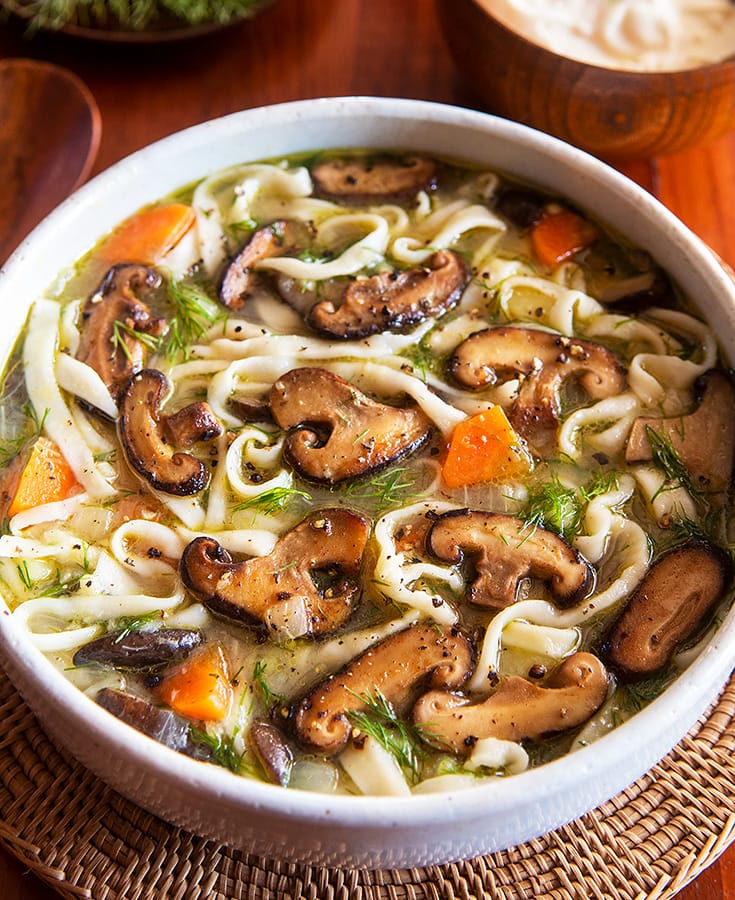 Although my grandparents were born and raised in very different places and wouldn’t meet until World War II, in a displacement camp in Germany, their shared culture, connection and memories would have played a major part in bringing them together.

Their dreams, nightmares and aspirations would take them across lands and seas to Australia, with my great-grandmother and mother in tow, then just a baby, along with fellow refugees from Poland and Hungary, Ukraine and Russia, then part of the Soviet Union.

It’s times like this, as tanks roll into Kiev, that I’m reminded that had my grandparents have returned to their homelands, they would have identified as Russian-Ukrainians rather than Russian-Australians.

While online food wars about the origins of shared dishes such as borscht and pelmeni might give you the impression that they’re enemies, many Russians and Ukrainians, especially younger generations, consider themselves sisters and brothers – which is why so many Russians took to the streets of Russia last night and, we hope, tonight will do the same again.

Russians and Ukrainians are much more alike than they are different, their long rich histories and cultures so intertwined it can often be difficult for outsiders to distinguish between the two, the best example of their shared connections felt in their cuisines and culinary cultures.

Which brings me back to food. But I’ll pick up on this subject again in another recipe post I’d scheduled before Putin invaded Ukraine. For now, let me share a few tips to making this comforting mushroom noodle soup recipe because we all need comfort right now. I wonder how many times I’ve written that over the last two years. 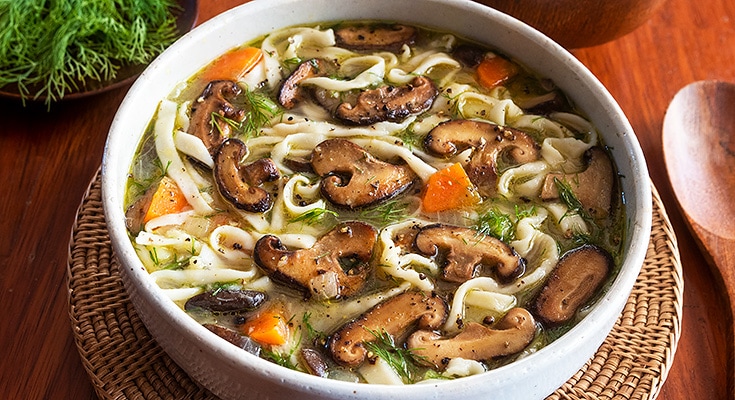 I only have a few tips to making this comforting mushroom noodle soup recipe with handmade pasta. My first piece of advice is to make these noodles yourself: no matter how intimidated you’ve ever been by the idea of making handmade pasta, don’t be tempted to use shop-bought stuff.

These handmade noodles are super-easy to make and there are few things more satisfying than eating rustic hand-cut noodles that you’ve made yourself. I guarantee that you’ll get hooked on the act of making noodles, which is really very therapeutic, especially if you open a bottle of wine, which will also give you confidence.

Make these noodles with loved-ones and you’re also making memories, which I guarantee will give you just as much comfort as this soup one day.

My only other tip is in the timing. While you need to let the dough rest a bit, you can prep your ingredients and get the soup on the stove during that time.

Then while the soup is simmering, you can make the noodles. While it’s good to leave the noodles to dry out a little before you boil them, it’s really not necessary to hang them over clotheslines or chairs, just spread them out on a tray or two.

As long as I’m confident my noodles are covered in flour, I’ll even leave them in clumps, as we don’t have a lot of kitchen bench space.

My final tip for making this mushroom noodle soup recipe: whatever you do, don’t pop your noodles into the soup pot until you’re ready to eat, as they’ll be ready in a few minutes. You could leave them in there for longer, but note that they’ll continue to soften. It’s better to time things well instead.

So make sure you’ve sliced your rye bread or sourdough, opened another bottle of wine, and have your dishes of dill and sour cream ready before you even think about sliding your noodles into the pot.

Please do let us know if you make my mushroom noodle soup recipe in the comments below, as we’d love to know how it turns out for you.