Meandering the Masala Trail in Dandenong in Melbourne provides a taste of Little India in one of the world’s most cosmopolitan countries. Nowhere is Australia’s ethnic diversity felt more than in multicultural Melbourne and outer-suburb Dandenong where 55% of residents are from 156 different countries.

Meandering the Masala Trail in Dandenong in Melbourne

The Masala Trail is one of tour company Foodie Trails’ “spicy side trips off the road less eaten” because, somewhat surprisingly, despite Dandenong’s multicultural population, its reputation as Melbourne’s Little India, and its fantastic affordable eating, few foreign travellers get to the vibrant area.

“Because there are so many culturally diverse communities in Melbourne, the food is so diverse and so authentic — especially in Dandenong,” our guide Himanshi explains.

We begin our walking tour on Dandenong’s Forster Street, the main artery of Little India. First stop is Chandi Chowk, a North Indian vegetarian eatery and sweet shop specialising in the street snack food known as ‘chaat’, where we fuel up for the two and a half hour foodie trek ahead of us.

We try several scrumptious dishes including chaat, made from flat biscuits topped with potato, tamarind sauce, green chilli, chick peas, yoghurt, salt, and chilli and cumin powder; aloo tiki or potato cutlets, made from potato fried in chick pea flower, dressed with the same combination of tamarind sauce, green chilli, salt, chilli and cumin powder; and samosa channa, chick peas in a gravy with cauliflower, potatoes and peas, folded into a roti, deep fried, and topped with raw onion and parsley.

Part of Himanshi’s aim with the Masala Trail is to show participants that there’s more to Indian food than tikka masala, tandoori and vindaloo. 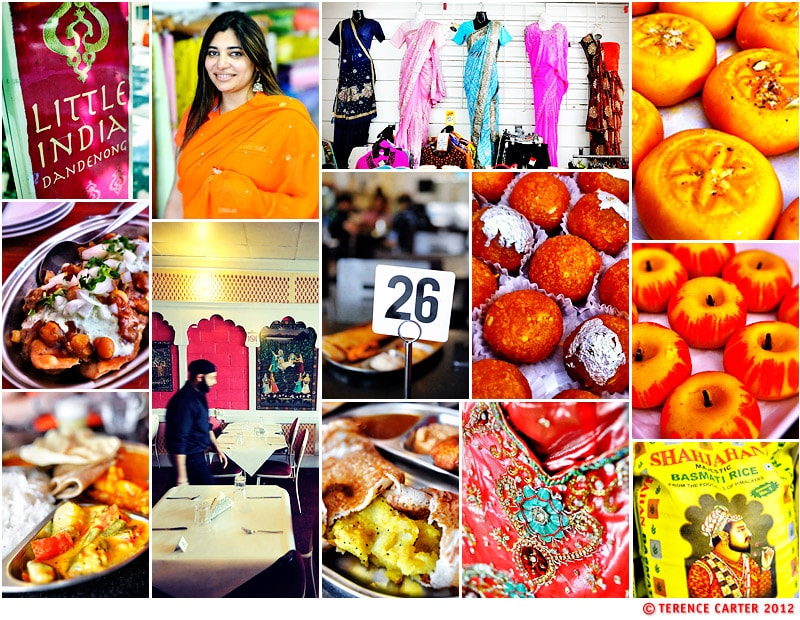 We wash these dishes of deliciousness down with masala tea, which Himanshi explains is actually ‘cooked tea’, because the tea is boiled with ginger and masala — a mix of cardamom, cinnamon and pepper that has been dry-roasted and ground into a powder — the milk added while the tea is boiling, and then it’s strained before being poured. The spicy milk tea is a perfect accompaniment to the zesty dishes.

“India has 1.2 billion people and over 1000 dialects, which means that every 50kms the language and the food changes, as do the recipes and food habits,” Himanshi says, pulling out a map to point out India’s different regions, as she explains how the history and geography have shaped its different cuisines.

Ever since Europeans arrived in the Indus Valley and Madhya Pradesh in 2000BC, driving the northern Indians to the south — giving southern and northern food its own distinct styles — each subsequent invasion, colonization and movement of peoples left its mark.

The Mughals brought the clay tandoor oven, naan bread, the grand dining experience, where all the dishes are laid out on the table, and the thali or mixed plate. The Portuguese arrived on the Malabar coast in the 1400s, bringing chillies, potatoes and tomatoes, and in turn taking back spices and peppercorns. The British, Himanshi says, brought India’s beloved morning and afternoon teas, and the word ‘curry’ to describe India’s spicy gravies.

Indians, in turn, took their complex cuisines, fragrant spices and food culture with them abroad — including to Australia, where many emigrated for work, or in more recent years, to study or set up businesses. The first Indians to come to Australia, Himanshi reveals, were the staff of a British family who arrived some 200 years ago.

We also get to try the sweets for which Chandni Chowk is famous. “This is about as Indian as it gets,” Himanshi, who buys all her sweets here, says, as she begins to describe the colourful traditional sweets neatly lined up in boxes beneath the glass display counter.

Next, we go shopping. We stop by Baba’s DVD shop, which boasts Melbourne’s largest collection of Indian films, especially Bollywood movies, and we visit Roshan’s Fashions, one of the oldest stores on Forster Street, here for 18 years. Boasting rack after rack of bright, colourful clothes, many sparkling with gem-encrusted embellishments, Roshan’s is busy with women from India, Pakistan and Afghanistan shopping for clothes, fabrics and accessories.

Himanshi introduces us to the different Indian outfits, from the salwar kamis (a long top and harem pants) to the ghagra choli (the separate top and skirt that shows the stomach), and demonstrates how to wrap the 5.5 metre-long sari. Upstairs, in the men’s section, she shows us sherwanis (men’s bridal outfits), Jodhpuri suits (for dressy occasions), dhoti (pants that wrap through the legs), and kolaphuri (leather sandals). (Participants also have the option to dress up and have their photos taken).

After, we head to the aromatic Indian Bazaar, a specialised grocery store, where Himanshi takes us through the narrow aisles, showing us the impressive range of Indian products — from mustard oil used for preserving and rose water for desserts to dozens of packets of different kinds of lentils, chick peas, beans, and nuts to bottles and jars of pickles, oils, pastes, and sauces.

There are shelves of boxed teas (Himanshi’s favourite is Taj Mahal), a whole row of rice sacks (including 50 different types of Basmati!), shelf upon shelf of pre-mixed spice packs, along with different types of papadums, ghee, and flour.

When the Indian Bazaar was established in the mid 1990s, it was one of the first Indian shops, along with Roshan’s, to open in the area and service a small local community of Indian and Sri Lankans working in Melbourne. Back then Dandenong had a bad reputation for being dangerous and its owners only opened businesses because the recession left dozens of shops empty and rents were cheap.

Soon after, immigrants from Bangladesh, Pakistan and Afghanistan arrived, followed by another wave of Indians — this time, university students once visas became easier to get. Himanshi was among them, here to undertake further studies in business and tourism.

Time for yet another meal, we stroll a couple of blocks away to Lakshmi Vilas, a simple Southern Indian café half full with families, workers and students tucking into their lunch.

We each have a thali or mixed plate, laden with tasty dishes of mixed vegetable curries, lentil soup, rice, sambal, and papadums, along with a crispy dosa, which we wash down with a sweet and sour mango lassi.

And of course we try more sweets — mysore pak (chickpea flour balls in syrup), kulfi (hand-churned Indian ice-cream with nuts), and payasam (noodles with sweet condensed milk). It’s a good thing it’s the last stop on our Masala Trail meander. We’re so full we have to take our sweets home to eat later.

On our way back, Himanshi gives us each a small souvenir of the walk — our gift packs include a box of the pre-mixed spice mix she showed us at the Indian Bazaar. Awww…

Fortunately, we’re staying in an apartment with a kitchen, because Dandenong is a tad too far to go for dinner.

How to Book the Masala Trail