A London foodie walk introduces us to a new breed of passionate purveyors of local produce, specialty food ingredients and gourmet products, from artisanal cheese shops and coffee and spice stores to an Italian-style delicatessen brimming with handmade sausages and salamis.

A London foodie walk was just what I needed. After watching the documentary Food, Inc. on the flight to London from Dubai I was a little depressed about the state of the food industry.

But after a London Foodie Walk with a guide from Context a couple of days after landing in the freezing, snowy UK capital, who introduced us to some of the finest local purveyors, farmers, artisans, and suppliers producing the goods, I felt a lot more encouraged.

It was not only heartening to learn about the success of the people who are creating fantastic local produce, especially meat and cheese, and producing delicious local specialities, it was even more of a delight to sample them.

Our agreeable and low-key London foodie walk with self-confessed foodie Phillipa Owen started in fashionable Marylebone where we visited a branch of farmer, butcher and producer The Ginger Pig and La Fromagerie, a wonderful artisanal cheese store and stockist of other scrumptious produce including seasonal fruit and vegetables, breads, jams, and preserves.

Our stroll the took us by Fish Works, where we drooled at the glistening seafood in the window, and Rococco Chocolates, where we tasted some fine handcrafted chocolates. Next up was Biggles Gourmet Sausages, mouthwatering Italian deli Lina’s Stores, and the aromatic Algerian Coffee Stores. 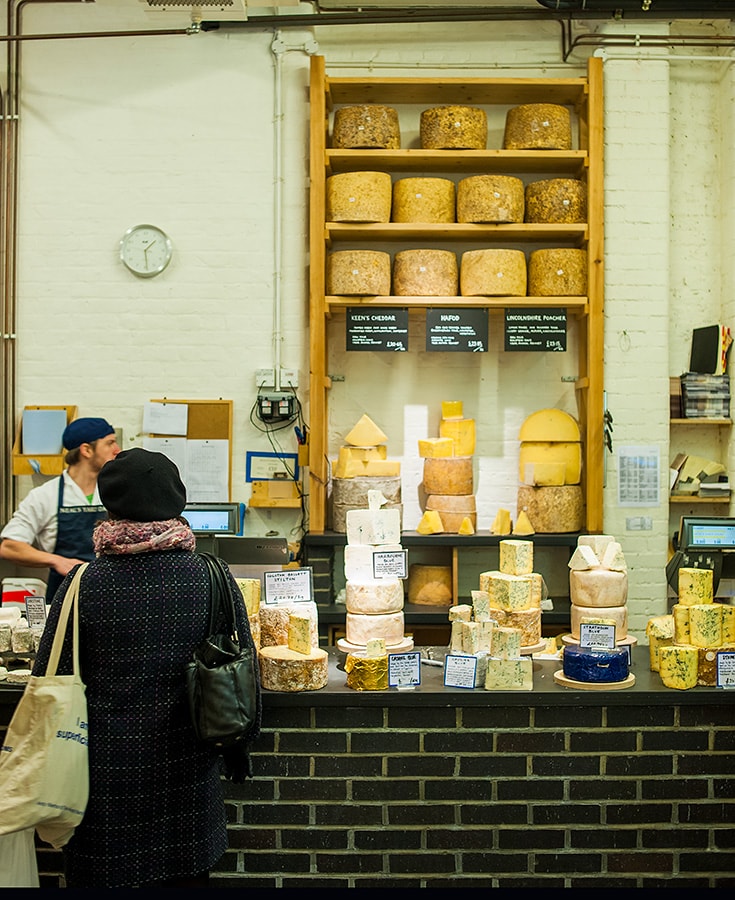 But it wasn’t until we arrived at Borough Market and visited another branch of The Ginger Pig, as well as Monmouth Coffee and Neal’s Yard Dairy, that our London foodie walk gave us a real sense of how passionate this new breed of purveyor was about their produce.

Neal’s Yard Dairy was the last stop of our tour, which was quite fitting, as it’s one stop on the walk that you really want to linger over. This shrine to Stilton will have cheese lovers thinking they’ve gone to food heaven – and that’s just from the aromas emanating from this brilliant cheese shop.

At a time when British cheese was at a risk of becoming as bland as pre-packaged supermarket cheddar, Neal’s Yard Dairy opened selling Greek-style yoghurts, crème fraiche and fresh cheeses.

One of the cheese makers was Randolph Hodgson, who, when a cheese sent in from a cheese maker intrigued him, set off for the countryside to visit the farms, returning to London with a vehicle full of artisanal cheeses.

Today it’s celebrated as the saviour of British artisanal cheeses, including a version of the famous Stilton, called ‘Stichelton’ – unpasteurised English blue cheese that is considered to be more like ‘real’ Stilton before using pasteurised milk became a requirement. 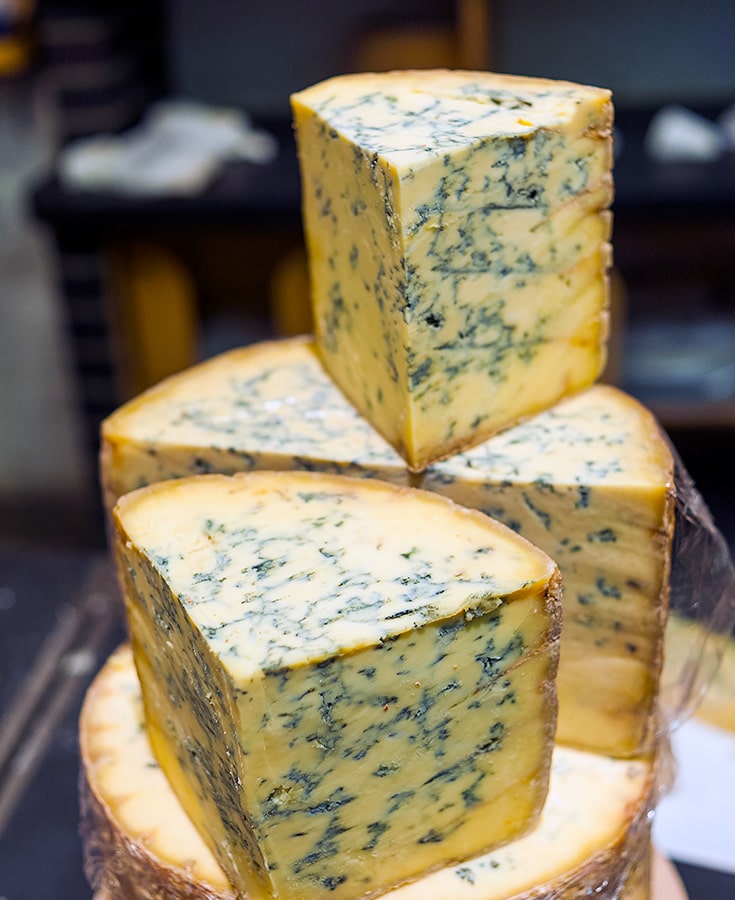 The shop at Borough Market was opened in 1996 as a site for maturing and packaging the cheeses, but the mouthwatering aromas must have aroused people’s olfactory faculties so much that they turned it into a retail shop.

Today the cheeses are still handpicked by Hodgson and his team and they source them from over 70 cheese makers around Britain and Ireland.

While the UK has many varieties of cheese it’s known internationally for two types of cheeses, the Stilton and Cheddar. We were on a mission to try the best versions of both.

The Colston Bassett Stilton is a delight – rich and creamy, but with a tang that gives it balance. The Montgomery’s Cheddar is a sweet, bold cheddar with a texture that’s quite dry – almost heading towards a Parmigiano Reggiano, which is, incidentally, one of only three imported cheeses that they currently stock in the shop.

Less traditional was a Tunworth soft cheese – similar in texture to a Camembert – but with oodles more character than you’ll find in all but the best of French Camemberts. We also took home a Childwickbury goat’s cheese, a light and lemony one with a taste that we found quite refreshing.

But there is more to having a great cheese shop that just stocking the right cheeses. Cheese is alive! At Neil’s Yard Dairy there are several people whose job it is to take care of the cheeses, from turning the cheeses to checking when they’re ripe and ready for the cheese connoisseurs who make a pilgrimage to the shop from all over the world.

You don’t need to be an expert to visit, though – just tell the staff what kind of cheeses you like (soft, hard, cow’s milk, goat’s milk etc) and they’ll let you sample away until you find something that satisfies your tastebuds.

Just as customer-focussed are the staff at The Ginger Pig, just around the corner. While the Marylebone shop is where the cooked food is produced, this branch is just about the meat – fresh and aged. While we were there, a savvy local foodie came in to pick up some massive steaks. 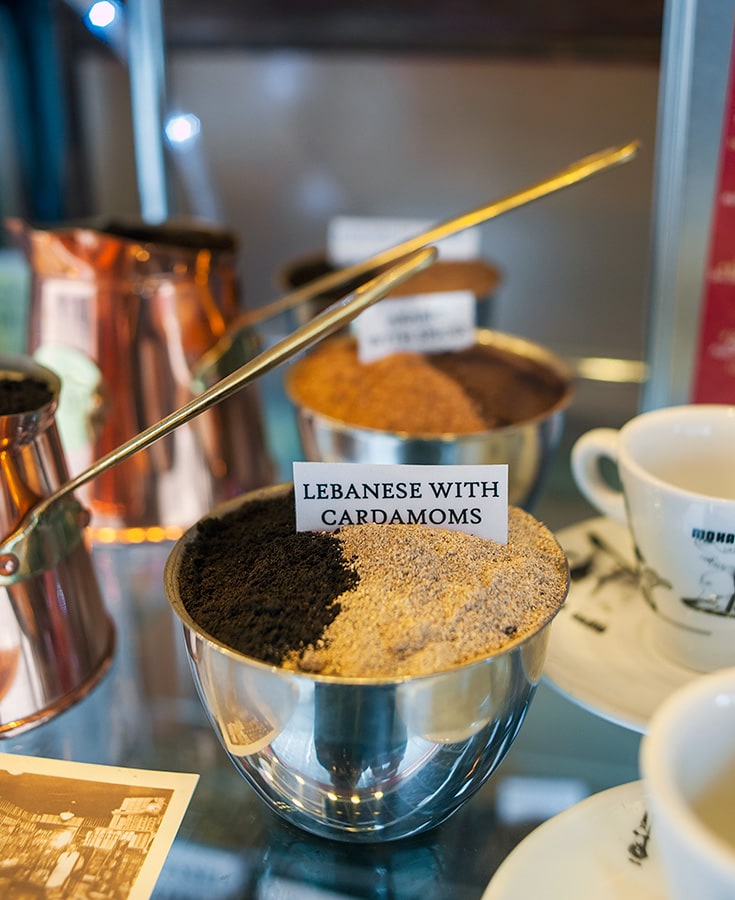 These weren’t just any steaks – she had asked that they be aged for 50 days! That’s one dinner party we’d like an invitation to. While ageing that long means that the outer parts of the cut are visually unappealing, underneath the meat has gained richness and flavour. As the butcher prepared the steaks we were seriously starting to drool.

The butchers here are old-school, but not old, and it was wonderful to see how enthusiastic these guys were about their jobs. One reason they’re so passionate about what they do is that the company looks after the animals from the day they are born so they know they have great product to work with.

The cuts of pig, cattle, sheep and poultry I saw were some of the best I’ve seen in a butcher shop anywhere in the world.

And they don’t just care about the butchery. A simple inquiry as to the best places to try traditional British meat dishes saw Lara having to revert to shorthand to catch all the names as the three butchers argued over their favourite restaurants.

It was heartening to see firsthand on this London foodie walk that the city’s food scene is alive and well, and that the purveyors and people producing the goods are London’s most passionate foodies!