Nobody is going to come to Kotor to shop – what makes the town engaging is its history, architecture, and stunning setting – but there are some fun things to buy in the supermarket and local market, either to take home as souvenirs or simply to nibble on while you watch the sun set from the terrace. Here are our favourite snacks and souvenirs from Kotor, Montenegro.

My grandparents were Russian so I grew up with gherkins, munching on the things straight out of the jar in which my baboushka and papa pickled their own homegrown cucumbers. Naturally, and for reasons of nostalgia as much as anything, I headed straight for the pickles section of the Panto supermarket and was pleased to find shelves and shelves of these vinegary delights. Macedonia seems to have a monopoly on gherkin production and we tried several brands, each tasting fairly similar — the tiny Amfissa Kornisoni were tasty — but none were as scrumptious as my baboushka’s to be honest. 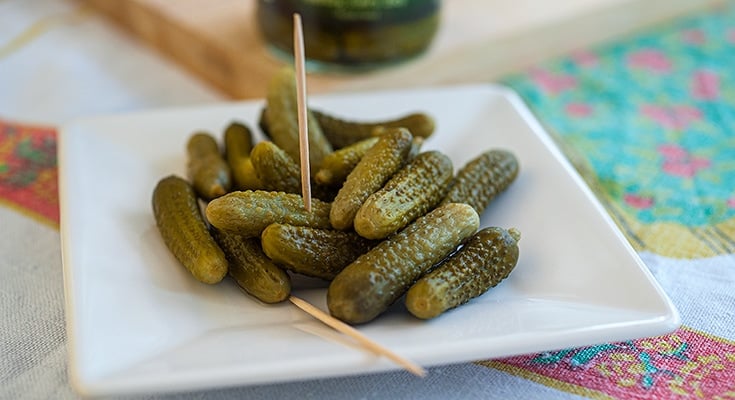 Due to the Italian influence on the cuisine here (Italy being just across the sea), local cheese (domaci sir) and prosciutto (domaci prsut), particularly from the nearby village of Njeguski, is popular here. The prosciutto is not quite as delicious as it is in Italy, often sliced thicker than the Italians slice it, and is a little coarser and chewier, but the flavour is still lovely. There are a number of wonderful cheeses, wet and dry, mature and young, from salty white cheeses to a smoked yellow cheese, imbued with pepper, paprika, basil or other herbs. 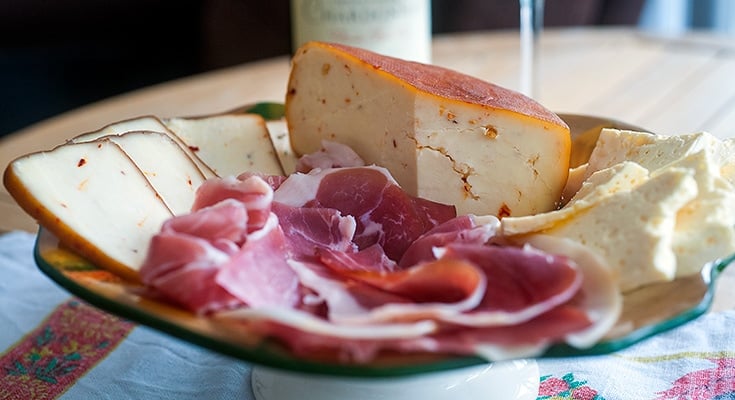 The supermarkets (and most of their customers!) reek of heady aromas of spicy garlic sausage here. There are pork products galore piled upon and beneath the glass deli counters, from prosciutto (see above) to smoky lardons to pork belly and dried pork, however, it’s the sausage that’s in greatest abundance with dozens of different dried and fresh types. The sausage that is synonymous with Kotor and beloved by the locals here is the long skinny sausages, particularly the sausage Njeguski Kobasica from the same village the good prosciutto comes from. It’s fantastic — a little spicy, rustic, and chewy — but it’s also very fatty, so it’s probably not a good idea to snack on that every day. 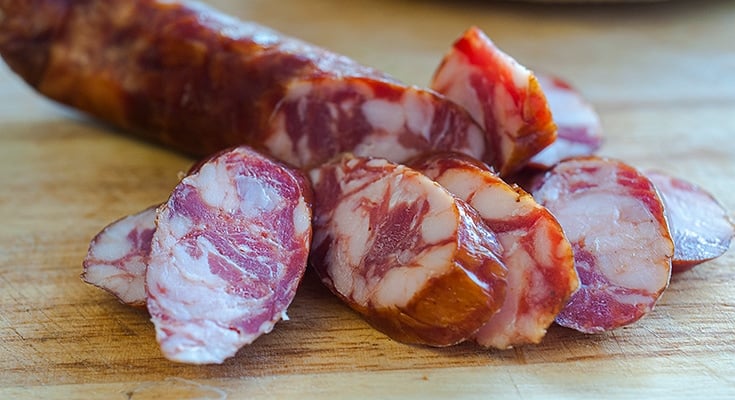 Nicknamed ‘Serbian salsa’, Ajvar has a consistency like tomato paste, and generally consists of four main ingredients, red peppers/paprika/red capsicum (depending on where you come from), eggplant, chilli and garlic, although there are some variations, including Ajvar that is heavy on tomatoes (it’s a darker red), or has carrots (these ones are more orange), or includes yellow/green peppers. They also come in varying degrees of spice. They’re all delicious, and it’s so versatile. You can serve it as a side, make a pasta sauce out of it, and even use it as a dip. Terence served it with his Kotor version of Weekend Eggs this morning. 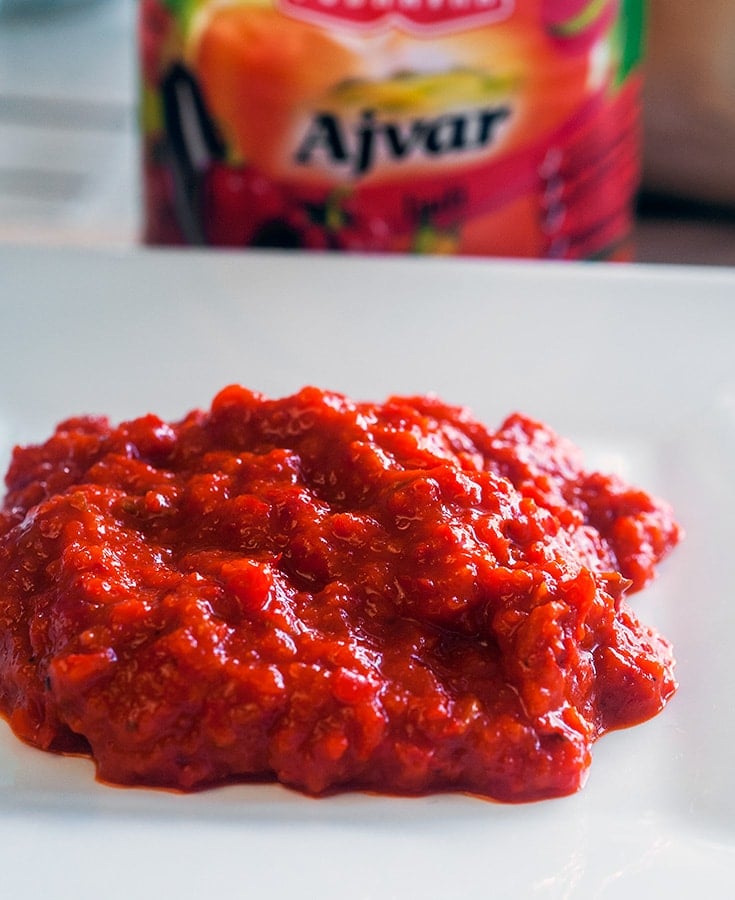 Practically half an aisle of the supermarket here is devoted to canned fish. Kotor has a close connection to the sea with almost every family boasting long lines of ancestors who were either sea captains or fishermen. Like all Mediterraneans, the people would can plenty of fish to ensure it lasted and could be stored during bad times or in ferocious weather when they couldn’t go out to sea. We liked this brand for its rather elegant packaging. 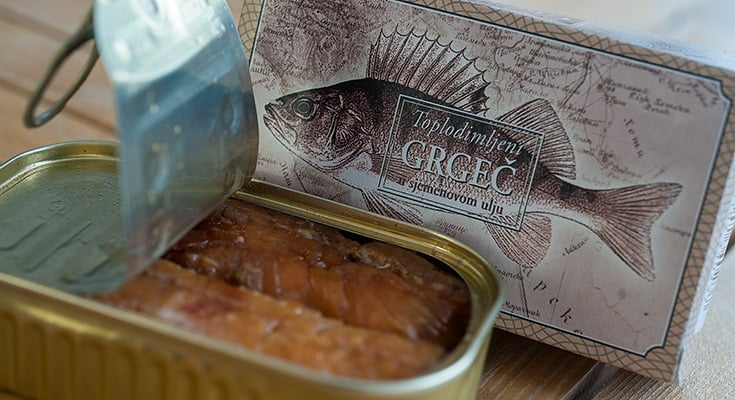 They love their jams in the Balkans (they’re often offered as gifts to guests to welcome them) and there are dozens of brands on the supermarket shelves, with all manners of berries being the most popular. We tried Bakina Tajna Domace Slatko Divlja Kupina, or handmade Wild Blackberry Preserve, produced by the women in the village of Silvolvo in Serbia according to a traditional recipe handed down through the families. It was delicious with lovely luscious whole blackberry pieces and it’s especially tasty on toast with sour cream! One of our favourite snacks and souvenirs from Kotor to take home. 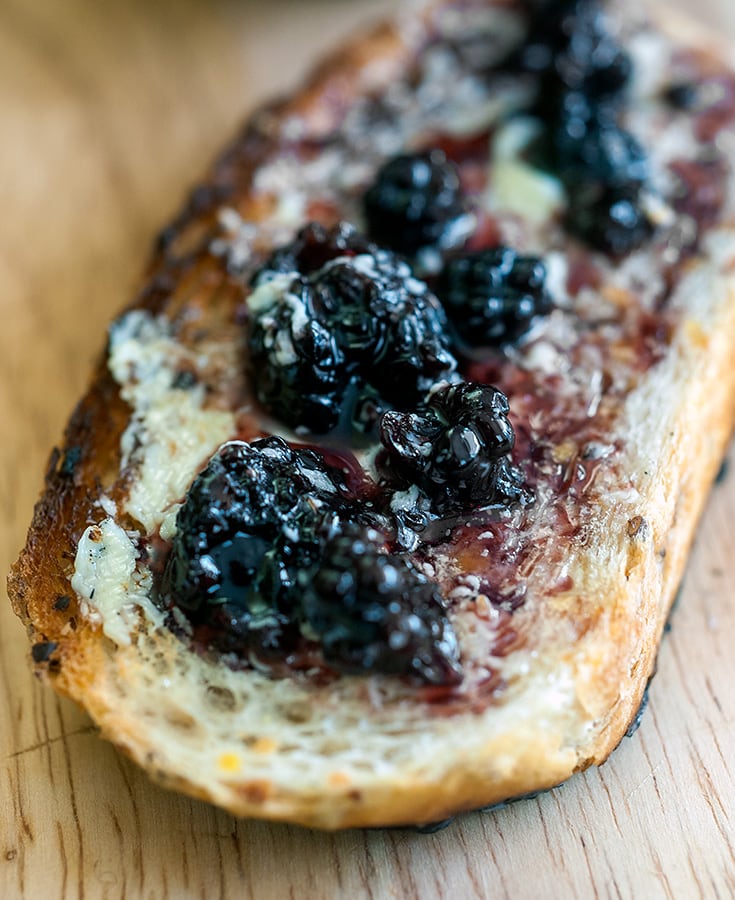 There is an abundance of chocolate or cokolada on the supermarket shelves, from the Balkan countries, Russia, Switzerland, and Belgian. The chocolate from the region is very different to the chocolate we tested our for you in Paris and Barcelona, less refined and more coarse in texture. A cokolada produced by Aleksandrija is made at Hercig Novi, not far from Kotor, and has a pungent flavour of cocoa, almost like cooking chocolate. More delicious is the creamy chocolate by the Croatian producers, Zvecevo, which has been making chocolate since 1921, which is more akin to a block of Cadbury’s. We love the retro packaging! 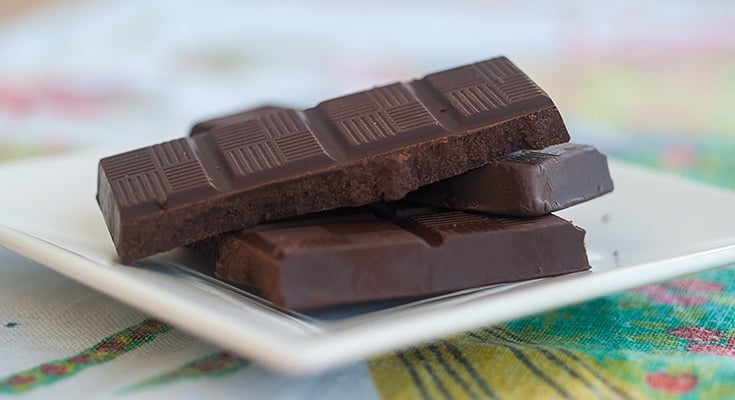 Of all the snacks and souvenirs from Kotor I was surprised to see boxes of Turkish Delight in the confectionary section of the supermarket, although I probably shouldn’t have considering the Ottoman influence in the region. Called ratluk here, the most popular brand seems to be Takovo from Serbia, which produces boxes of all sizes, including tiny gift boxes, which make perfect take-homes. You’ll see all sorts of flavours, from lemon to pistachio but I opted for my favourite, rose or ruza as it’s called in Serbian. 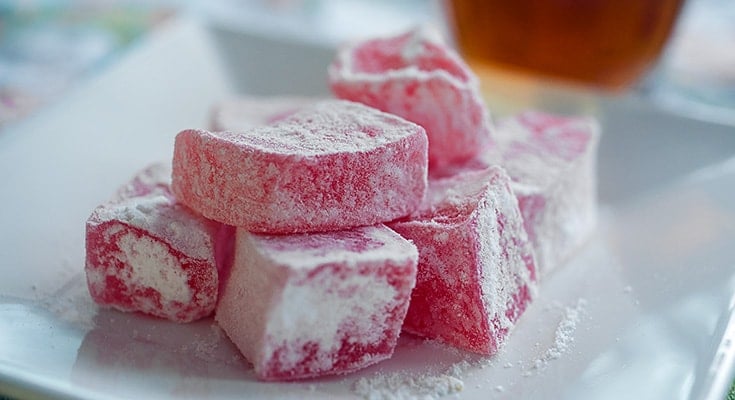 You’ll find half a dozen brands of beer from the Balkans (plus Heineken and so on) on the supermarket shelves, but the Montenegrin favourite is Pivo Nikšićko. Made by Montenegro’s only brewery, Trebjesa, since 1896, it’s a tasty albeit fairly light beer (5% alcohol), making it perfectly fine for breakfast. Yes, the local blokes love a drop of beer in the morning and it’s not unusual to pass builders on a construction site or fishermen fixing their nets and see a beer in their hand or by their side. Walking around the old town nursing a beer is also a popular pastime in the evenings. 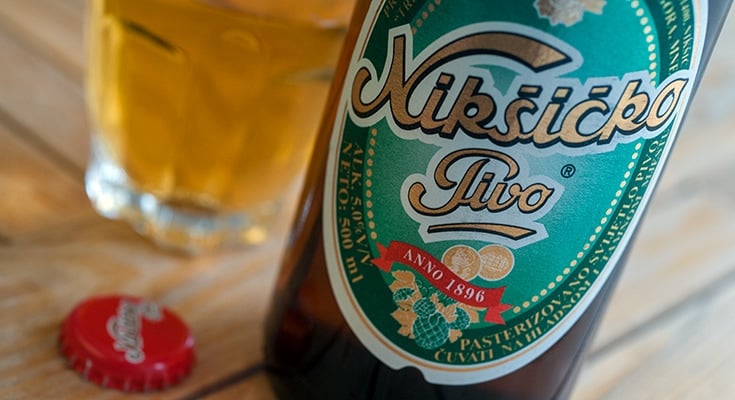 If the local blokes aren’t drinking beer, they’re probably sipping the local plum brandy known across the Balkans as slivovitz or Srpska šljivovica here, part of a family of distilled drinks in the Balkans also called rakia. Twice-distilled and extremely potent, šljivovica is said to have existed since the Middle Ages. Drank in special small shot glasses, it’s not unusual for locals to have one in the morning, but they’re more commonly drank with appetisers such as cheese and prosciutto before the main courses. You’ll also see other spirits from the region such as the Croatian Pelinkovac, a brand of Gorki biljni liker or bitter herbal liqueurs, made from wormwood, which many believe to have medicinal values. Any excuse, right? 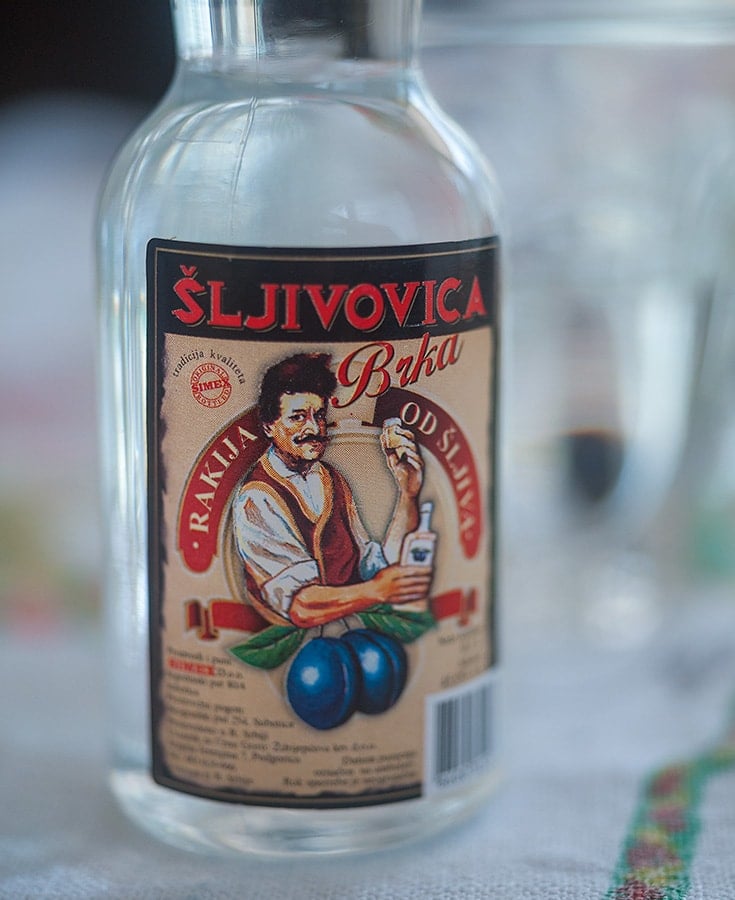 As with the beer, there are wines from all over the Balkans here, although in keeping with our local and sustainable travel themes, we stuck with wines from Montenegro and were relieved to find that they’re actually very good. There are a handful of Montenegrin wines, but by far the wines produced by Plantaže are the best quality. Many of the vineyards are located on the coastal areas, some quite close to Kotor, and there’s a decent range of grape varieties including Chardonnay, Merlot and Cabernet Sauvignon, along with Vranec and Krstač, ancient grape varieties indigenous to Montenegro, Serbia and Macedonia. The Chardonnays we tried, on the whole, tasted of vanilla, banana and were deliciously woody, however, I say ‘on the whole’ because the quality was inconsistent with some bottles from the same year tasting completely different to each other. On the whole, however, they were excellent. 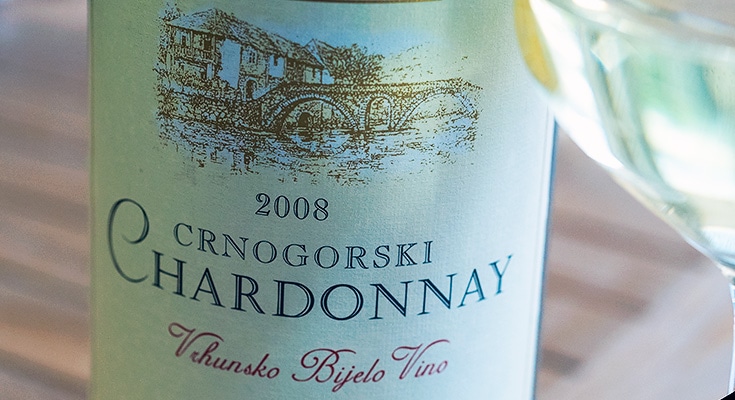