In the years since, along with the Korean dishes bulgogi, bibimbap and kimchi bokkeumbap (kimchi fried rice) – in fact, anything with kimchi – japchae has become one of the most popular Korean dishes in the world.

These days, I make this classic Korean japchae recipe at home for the chewy Korean glass noodles called dangmyeon or sweet potato noodles. Drenched in a sauce of sesame oil, soy sauce and sesame seeds, after boiling, the noodles are combined with mixed vegetables, before the whole lot is stir-fried again.

But before I tell you more about this vegetarian Korean japchae recipe, I have a favour to ask. Grantourismo is reader-funded, so if you’ve enjoyed our recipes, please consider supporting Grantourismo.

You could use our links to book accommodation, rent a car or campervan or motorhome, buy travel insurance, book a tour on Klook or Get Your Guide, or purchase something on Amazon, such as these James Beard award-winning cookbooks, cookbooks by Australian chefs, classic cookbooks for serious cooks, or cookbooks for culinary travellers. We may earn a small commission but you won’t pay extra.

Other options include buying us a coffee and we’ll use that money to buy ingredients for recipe testing, making a donation toward our Cambodian cuisine history and cookbook on Patreon, or shopping our Grantourismo store on Society6 for gifts for foodies designed with Terence’s images.

Now let me tell you more about this classic Korean japchae recipe for the Korean noodle dish of stir fried glass noodles with mixed vegetables.

This traditional Korean japchae recipe makes the deliciously addictive Korean noodle dish of stir fried sweet potato starch noodles or dangmyeon in Korean, which are coated in a savoury sauce of sesame oil, soy sauce and sesame seeds, before being combined with stir-fried carrot sticks, onion, mushrooms, and spinach.

These days I make japchae at home, but we used to eat Korean food weekly when we lived in Potts Point years ago. Thanks to the Korean and Japanese business travellers checking into the Nikko Hotel everyday, the neighbourhood had a buzzy Korean and Japanese dining and drinking scene with Korean barbecue joints, Japanese restaurants, izakayas with karaoke, and there was even a popular Korean bathhouse.

If we weren’t going out for Korean food, I was bringing Korean food home. There was a Korean-owned takeaway on the same lane as our favourite Korean restaurant that sold all sorts of Asian noodles and soups, and if I wasn’t picking up some pad Thai or char kway teow, I was taking home a container of Korean japchae.

An old Korean specialty long before it was popular Korean restaurant fare and a Korean takeaway favourite, japchae was a centuries-old Korean royal dish served at palace banquets. It was invented in the 17th century for King Gwanghaegun and is documented in the royal records of the period.

One of the palace chefs, who was continually creating new dishes for the king, came up with japchae, which the king became smitten with, according to this fabulous book produced by the Korean Food Foundation, which we picked up at Campsie Food Festival years ago.

The original japchae consisted of thinly sliced mixed vegetables with a special sauce – hence the name: ‘jap’ means mixed and ‘chae’ is vegetables. The glass noodles made from sweet potato starch didn’t appear until 1919 when a dangmyeon factory was opened in Sariwon and a version of japchae made with dangmyeon became popular a decade later.

Ever since, japchae has been a dish eaten out as well as eaten in, a traditional home-cooked meal and celebratory dish made for special occasions such as birthdays and anniversaries, as much as it is a Korean restaurant speciality and takeaway favourite.

Just a few tips to making this classic Korean japchae recipe based on how I make it here at home in Siem Reap. 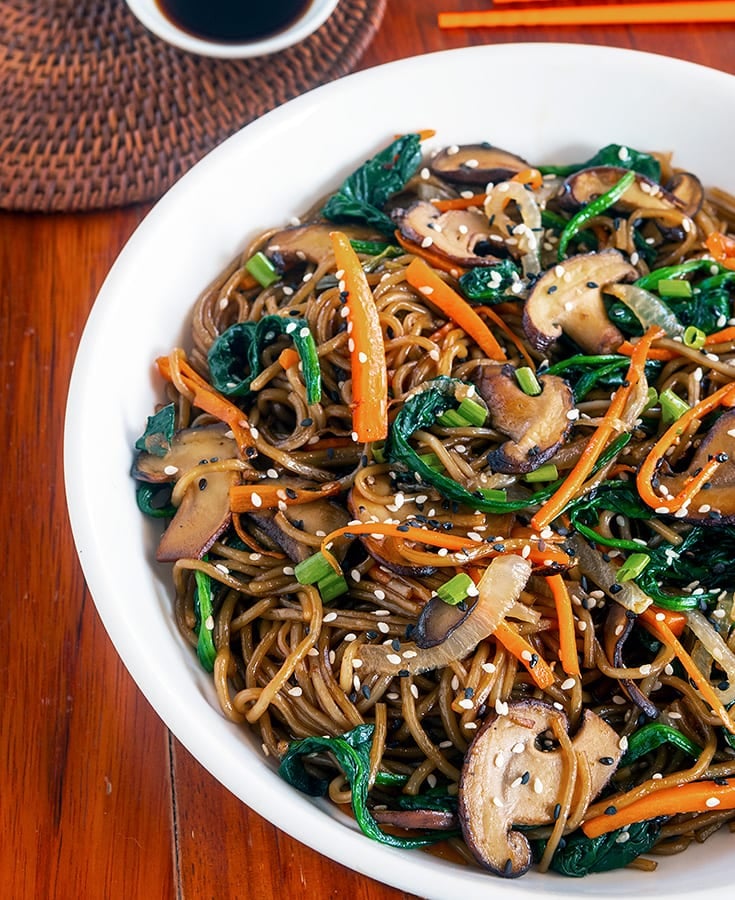 As usual, I only have a few tips to making this vegetarian Korean japchae recipe and if you’ve made japchae before the traditional Korean way, you’ll note that I do a couple of things differently, which are influenced by our decade or so living in Southeast Asia.

When it comes to boiling the glass noodles, follow the instructions on the packet. The Korean brand of dangmyeon I buy takes 5-6 minutes to soften, although I note that some recipes call for 7-8 minutes. That’s too long for the noodles I use. The noodles should not be al dente, they should be soft, but you still want them to be a little chewy.

Korean cooks also cut their noodles with scissors into shorter pieces, but I prefer longer noodles. Try both and see what you prefer.

Most classic Korean japchae recipes include sugar in the sauce. I’ve also left the sugar out, as the japchae we ate for years was savoury and didn’t include sugar and I don’t think it’s necessary. I’ve nevertheless included it as optional on the ingredients list, so do as you see fit.

Korean cooks will blanche their spinach in hot water but I clean out the wok with a paper kitchen towel and quickly stir-fry the spinach at the end.

This Korean japchae recipe makes a vegetarian japchae. If you want to make a beef japchae, use something like rib eye, sliced into strips, perhaps marinated it in soy sauce, garlic and sesame oil first and quickly stir-fry it in the wok. Do it before the vegetables so it has time to rest.

Another variation is to add thin slices of omelette. Home-cooks in Korea will use their hands to mix everything together in a bowl at the end, but I ensure everything is thoroughly combined in the final stir-fry. A big wooden spoon or salad servers also work.

Serve immediately – this makes four medium-sized bowls or two big bowls like you see in the pics here – and don’t forget to garnish with more pan roasted sesame seeds. I also add a sprinkle of finely sliced scallions or spring onions.

Please do let us know in the comments below if you make this classic vegetarian Korean japchae recipe, as we love to hear how our recipes turn out for you.