This Thai khao tang na tang rice cakes with chilli prawn and pork dip recipe makes a popular Thai dish of homemade crispy rice crackers used to scoop up this creamy, slightly sweet, a little salty, and gently-spiced dip. Found in both Thailand and Cambodia, many believe this snack was created to use up leftover rice, which was made into rice cakes.

As with the Cambodian natang recipe that I made in our kitchen here in Siem Reap a few months ago (and another favourite Cambodian dip, prahok k’tis), this khao tang na tang rice cakes with chilli prawn and pork dip recipe from Thailand makes for a very moreish snack. Once you start tucking into it, it’s very hard to stop, which is why this dip is traditionally served in a bowl at the centre of a large platter of crispy rice cakes or rice crackers.

As I noted in my Cambodian natang recipe post, this is one of those dishes found in both Thai and Cambodian cuisines, due to their shared histories and centuries of travel of dishes and ingredients between the two countries. Lara has been researching the origins of the dish as part of her epic eight-year research project on Cambodia’s culinary history and has learnt that it has been served as much as a refined appetiser by royals and elites, as it has been a casual comforting snack eaten in everyday homes.

In his Thai Food cookbook, Thai culinary history researcher and chef David Thompson, in the introduction to his recipe for khao tang na tang – which he calls kao dtang nar dtang if you’re going to do some Googling – notes that rice cakes were distributed to soldiers as rations. David calls the chilli, prawn and pork dip a ‘sauce’, and you’ll find it in both a saucier form, as well as the thicker consistency that we prefer, so that it can be more easily spooned on top of the rice cakes and served as finger food among an array of Thai appetisers or canapés, just as we like to do with Cambodian hors d’oeuvres.

Like the Cambodian natang recipe I shared late last year, this khao tang na tang rice cakes with chilli prawn and pork dip recipe is also believed to have been created to make use of leftover rice, particularly the crusty rice that tends to get stuck on the bottom of a rice cooker or large pot used to make rice for family meals, Buddhist holidays, or ceremonies, such as weddings and funerals.

And just as in Cambodia, if you stroll around the backstreets of residential neighbourhoods in Bangkok and other cities, towns and villages of Thailand, you’ll often see leftover rice outside homes and local eateries, spread out onto a large metal tray to dry out in the sunshine for a couple of days. 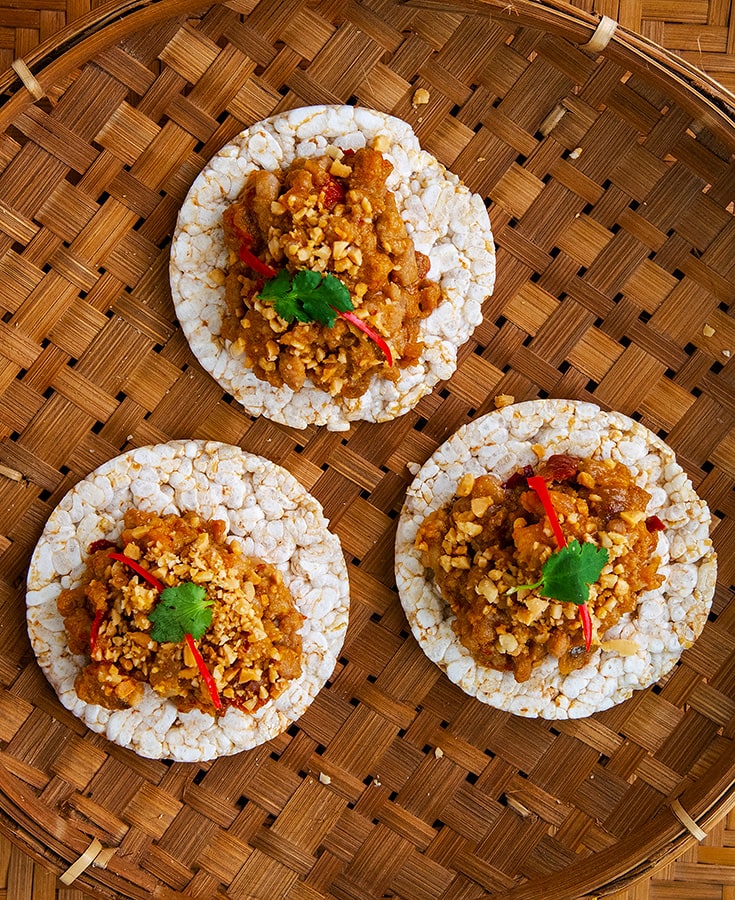 You might see the rice pressed down into a large sheet-like shape or broken into pieces, which means the rice has completely dried out and is ready to be stored in an air-tight container until it’s needed. When it is, the rice crackers can be deep-fried in oil until they’re just about to change colour, although some cooks like to brown them a little.

For this khao tang na tang rice cakes with chilli prawn and pork dip recipe, we’ve used some ready-made rice cakes, as we like their perfect shape and size. These can easily be found at local markets and shops in Cambodia and Thailand if you don’t want to make your own rice crackers, or, if like us, you never have enough rice leftover in the bottom of your wok, pot or rice cooker.

In Cambodia, we like to use the organic rice cakes made by IBIS Rice, an ethical not-for-profit conservation organisation that works with 1,000 Cambodian rice-farming families to produce quality organic jasmine rice while protecting 500,000 hectares of precious forest and wetlands and 50 endangered animal species, including the Giant Ibis, Cambodia’s national bird.

Most of the Thai khao tang na tang recipes we’ve tested use more shrimp than pork mince, however, we recently learnt that there is a rendition of Cambodian natang favoured by Khmer royalty that was made with chicken, finely pushed through a sieve before cooking, and another more sumptuous version made with lobster. That’s something I’m going to make! We’re still investigating whether the Thais have similarly refined takes on na tang.

Thai khao tang na tang recipes and Cambodian natang recipes are very similar, although not the same. Coriander roots, a staple in both Cambodian and Thai cooking, are used in both, while cloves, used more in the cuisine of Cambodia, which went through a period of early intense Indianisation, feature more in Cambodia’s natang recipes.

Fish sauce and palm sugar are constant companions in both Cambodian and Thai cuisines, although Thai khao tang na tang recipes tend to use fish sauce, while Cambodian natang recipes, depending on the city or town they come from, might use either fish sauce or shrimp paste, and sometimes dried shrimp in addition to fresh shrimp. 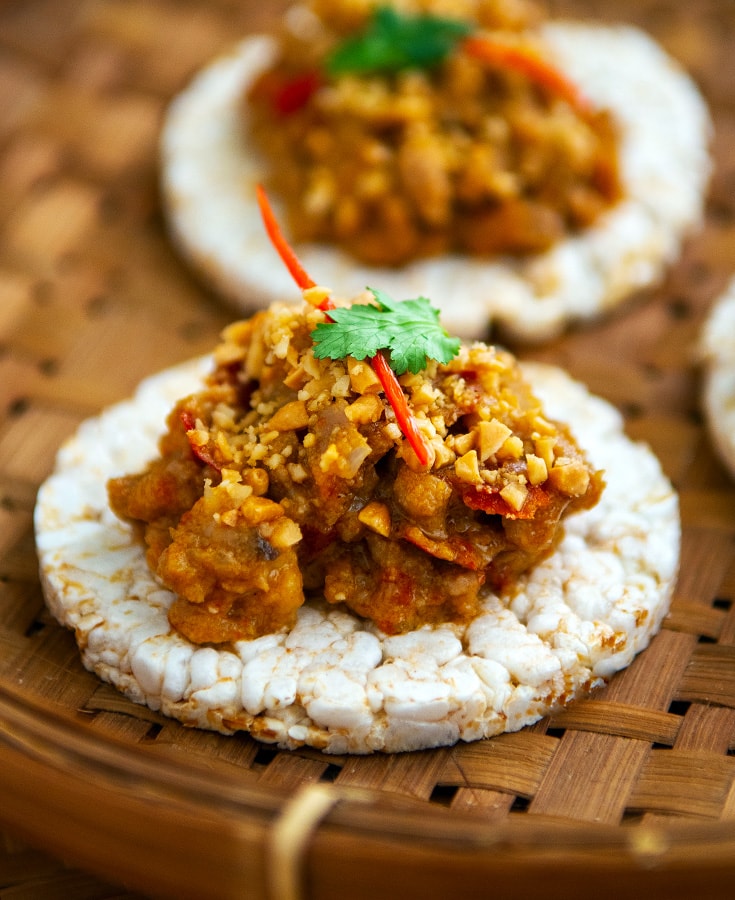 Thai khao tang na tang tends to taste saltier and sweeter than Khmer natang, which is not surprising considering Cambodians often joke that it was due to the Thai influence in the refugee camps on the Thai-Cambodian border, during the post Khmer Rouge period in the late 1970s and early 1980s, that Cambodian cuisine became much sweeter and saltier.

Prior to that time, Khmer food was more pungent and funkier, due to Cambodians’ preference for the fermented fish, prahok, and more savoury, bitter and sour ingredients. It’s also ironic that Thai khao tang na tang recipes typically feature white peppercorns more than Cambodian recipes do, when Cambodia has long produced some of the best pepper in the world from Kampot, on the southern Cambodian coast.

Please do let us know how our khao tang na tang rice cakes with chilli prawn and pork dip recipe goes if you make it. We’d love to know how it turned out for you.